Hurricane Sandy was the catalyst that inspired artists DB Lampman and Scott Van Campen to transform their studio into a community-oriented makerspace.

The studio of Staten Island-based artists DB Lampman and Scott Van Campen was sitting in three feet of water. It was October 2012, and, like most of the island, they had suffered quite a bit in the aftermath of Hurricane Sandy. Family, friends and community members came by their studio to help, and it moved the duo to rethink the space entirely—it was time to give back.

“We had been thinking about a space like this for a while, but Hurricane Sandy was the catalyst,” DB Lampman says, co-founder of the Staten Island Maker Space. “While we were cleaning the space up with our friends and volunteers, it opened up a dialogue about the idea of a makerspace.”

Even before Sandy, the duo had been interested in the maker movement and attended many NYC Maker Fairs. “What really worked was the timing of everything. It gave us a chance to rethink the space, think about this maker’s movement—and at the time the New York City Economic Development Corporation had put out applications for funding. They were requesting small business incubators in Staten Island, and a makerspace seemed perfect for that,” Lampman says.

After being awarded the EDC grant, which provided them with funding and new visibility, Lampan and Van Campen began to get the space off the ground: they both donated some of their own machinery and, true to the communal efforts that inspired the space, many of their tools were donated from other local citizens as well. In fact their entire woodshop was donated by a local furniture maker. Volunteers also helped move new machinery in, paint the new studios, and even supplied critical feedback on what the space should be and offer.

“Based on our conversations and surveys from those volunteers, we started off with basic membership options and a few basic courses. Its evolved over time, responding to what people have been demanding and what they have been interested in. Since starting with workshops and equipment such as woodworking, welding, and sewing, we have added laser cutting, CNCing and 3D printing,” Lampman explains. 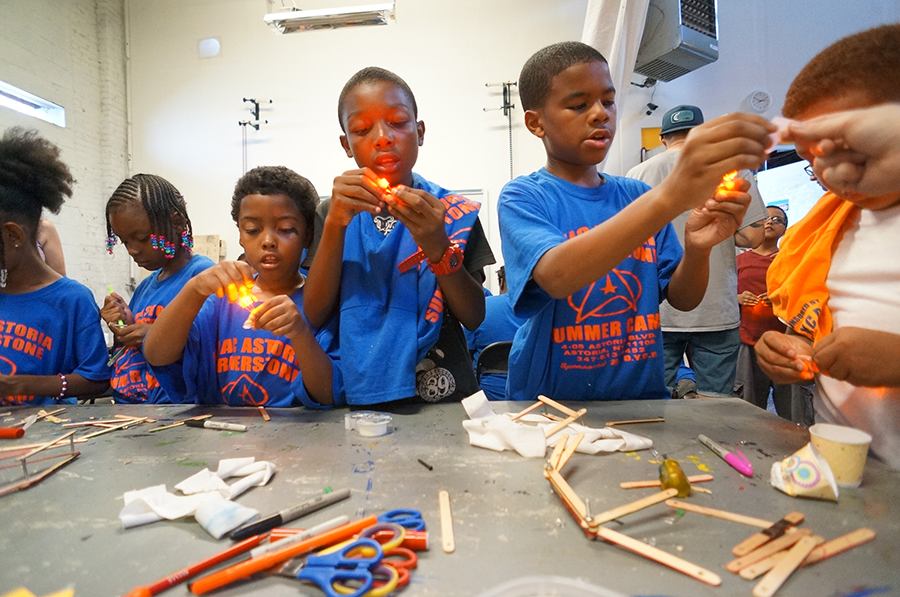 The Staten Island Maker Space offers a variety of different membership packages and boasts a full monthly schedule of class offerings, including Silk Screening, Plasma Cutting, and Cabinetry 101. Also integral to the initial vision was engaging their local schools and offering courses geared towards a k-12 audience.

“Having a background in museum education, it was really important to me to have workshops and courses open to school groups, providing a more hands-on approach to lessons connected to the arts as well as STEM,” says Lampman.

In addition to courses, the makerspace has seen a great success with the members that have used the space for their own endeavors. “We started with a lot of artists, but now we have a lot of people with small business aspirations—making furniture and small products, or engineers that are working with prototyping to take to manufacturers. People in here now are working on their own for their own businesses.”

A few of their first makers have already graduated from the space, and the co-founders are very happy to see their designers and artists scale up: “Seeing how the space helps people get their start, it feels good that we could help to make that happen. It’s a domino effect, because this only helps local economy and the larger community.”