Stress and Wellness in Johannesburg: Part 3

Women’s housing to replace apartheid-era segregation of the sexes

Johannesburg, like many cities, has a serious low-income housing shortage. I took this problem as a starting point for my GSAPP project.

Despite globalization and the proliferation of information online, research in Johannesburg was deceptively difficult as much of Alexandra township is undocumented. Mapping and data collection are limited and, in addition, there’s a strong informal sector in the city. Due to this lack of data, my preliminary research was restricted to panning Google Earth aerial views in an attempt to discern urban patterns. Many of these patterns were inherited from apartheid era state planning and housing policies.

Alexandra Township, familiarly known as Alex, is one of the densest areas in Johannesburg. Population estimates vary wildly, but approximately 500,000 live within an area the size of Manhattan’s Central Park. At 55,300 people per square mile, it is 10 times denser as the average 5,100 people per square mile density of metropolitan Johannesburg. Alex is a combination of formal and informal dwellings with insufficient infrastructure for its population. As I was familiarizing myself with the organization of the area, a few obvious breaks in the mostly informally built housing fabric stood out. Most noticeable was the massive hostels’ rational and imposing form and bright turquoise roof. The diamond shaped structure of the Women’s Hostel is 750ft by 400ft at its extremes, roughly the same area as a Manhattan block. On our studio trip to the site, we saw that the incongruous form of hostel stands out from the ground just as it did from the aerial view.

Research into the history of these buildings revealed that in 1957 a decision was made to eliminate all family housing and to re-house entire populations of Alexandra in single-sex hostels. In Alexandra, 25 such hostels were to be built, each home to 2,500 workers. Clearly the segregated living was an attempt to control the black worker. 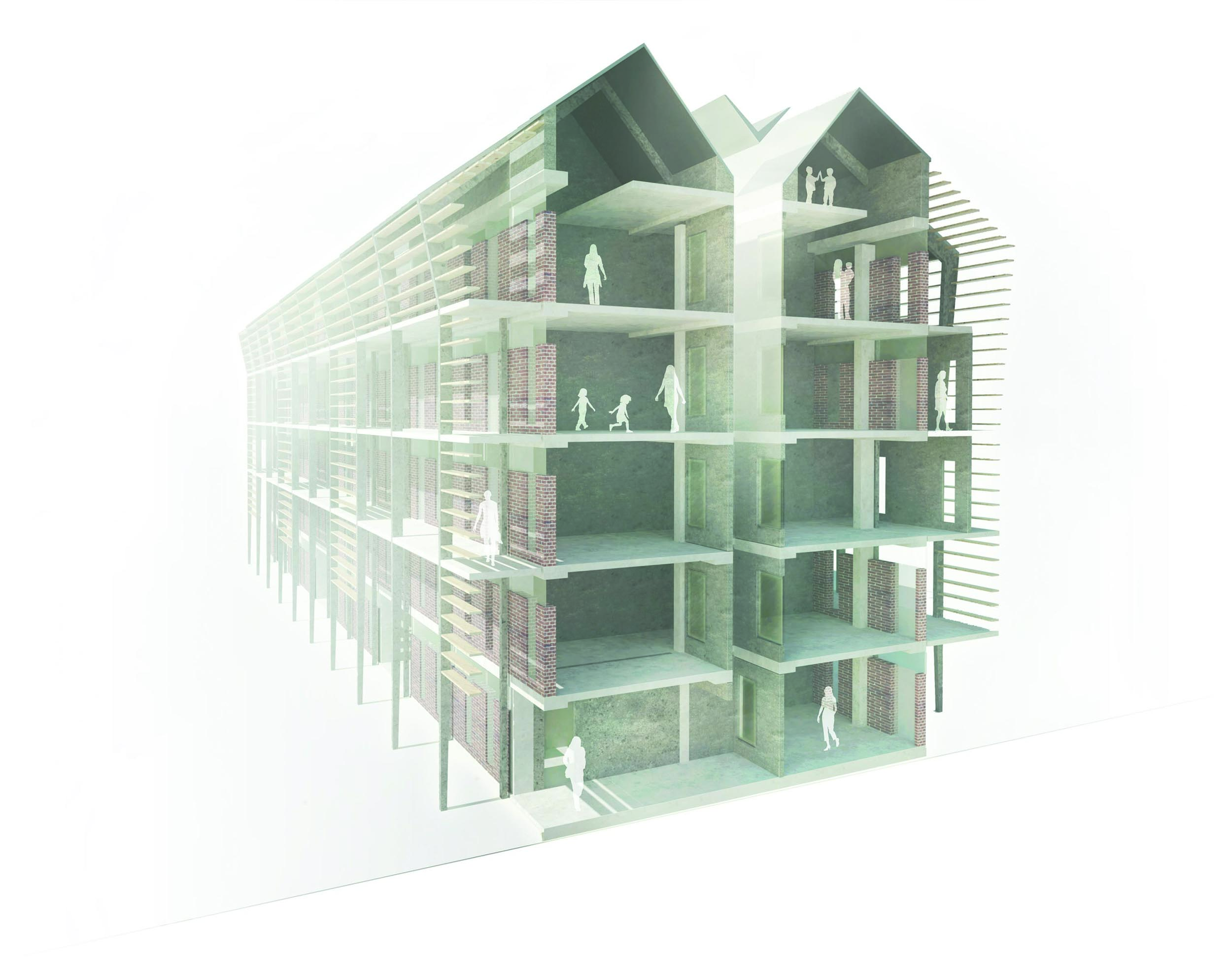 The hostels represent an architecture of control, designed for optimal surveillance and minimal personal space to disrupt the family structure. Only three were built in the early 1970s: the Madala Men’s Hostel, the Nobuthie Men’s Hostel and the Helen Joseph Women’s Hoste. The two men’s buildings have since been converted into apartments, but the Women’s Hostel continues to operate as a dormitory. Because of their affordable rates, security, and favorable location the hostels have continued to be popular despite their restrictive conditions.

After researching the history of the physical buildings, our site visit revealed a contrast between the decaying structure with the residents’ vital daily routines and upkeep of the living spaces. Children were playing in the courtyards where colorful laundry crossed the open space. In the shared dormitory, personal artifacts and electronics were combined with standard-issue metal bed frames and lockers stenciled with each resident’s identification number. The women who showed us their building took pride in their bedrooms, as well as their shared kitchens, bathrooms, and laundry facilities. The dorm, no longer operated by the government, continues to be run by the control systems put in place by the government. No longer operated by the government, the community of women and children residents have adapted the imposed architecture of apartheid into an operational system that allows for self-policing of the facilities.

Despite its dedicated residents, the aging building faces the challenges of operating housing exclusively for women. Attention was brought to it in August 2012 when SABC News reported on internal disagreements between residents concerning the policy that does not permit boys older than 12 to live with the women; in fact boys of even younger ages have been forced out. Thus the legacy of apartheid’s disruption of the family structure continues.

Maintenance issues with the hostel’s rubbish, sewage drainage, and inadequate fire prevention equipment have also received media attention and outcry from residents. These reports highlight the limited resources and need for progress in the building’s condition and operation.

My project proposes redeveloping the Women’s Hostel in order to improve living conditions and offer increased opportunities to the residents. This redevelopment will transform the apartheid architecture of control into an architecture of empowerment for the residents through the creation of occupant-determined control of spaces. This self-management of spaces can occur at multiple scales: the unit, the cluster, and the community. By manipulating the multi-family typology intermixed with access to services and educational opportunities, the scheme will provide an alternative model to the prevalent single-family house that is widely considered to be a steppingstone to social mobility. 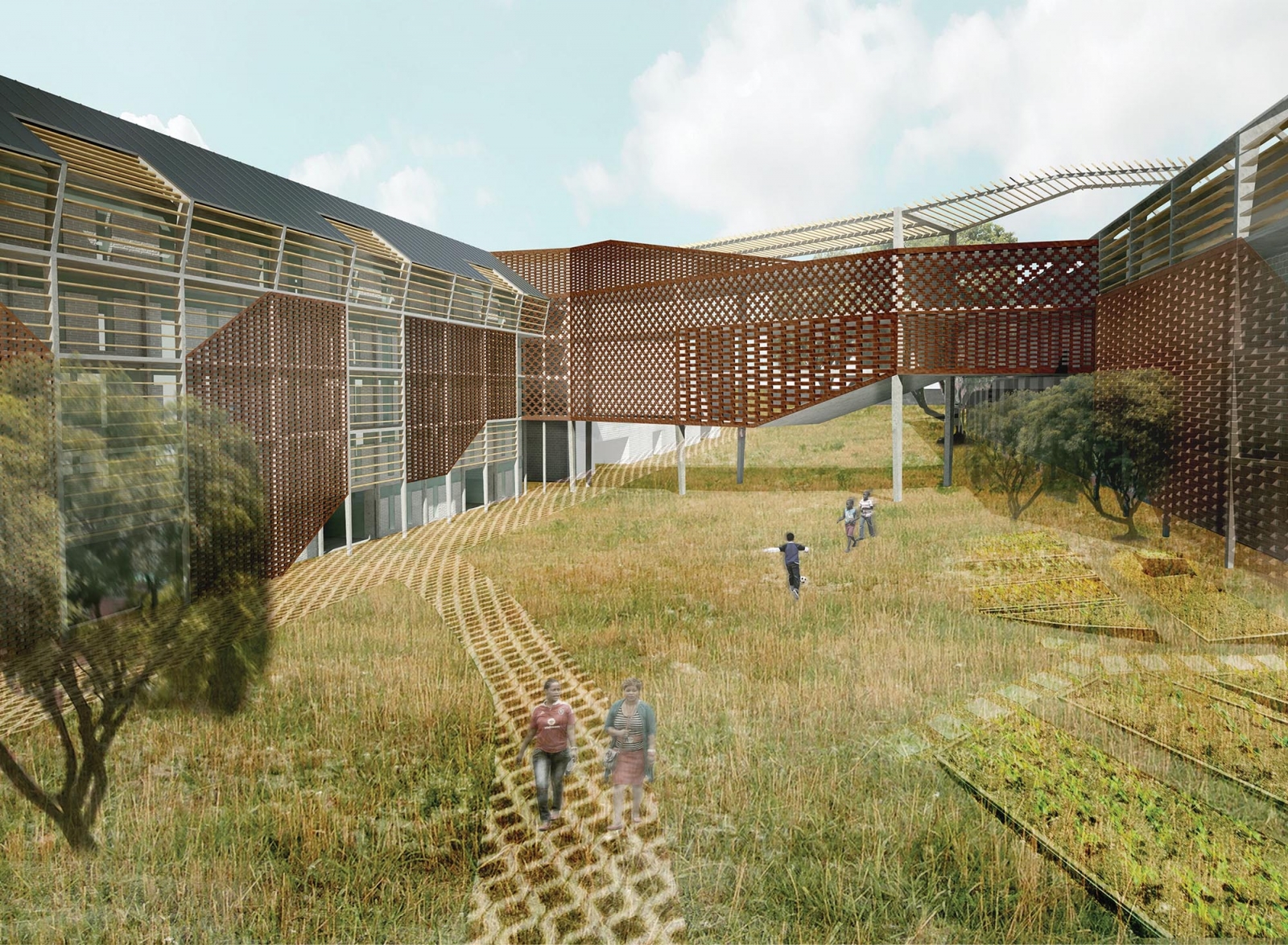 Phased construction reduces the number of displaced residents and allows the site to transform over time, as funds become available and housing needs change. The existing hostel structure is broken, and the enormous scale of the existing building is divided and variety is created within the housing. New bridges of shared programming between the existing structure will divide the open yard into smaller courtyard parks, creating housing clusters and encouraging more defined use of the open space.

A new sleeve of corridor and room extensions will wrap the existing building. By moving the corridors and stairs to the building’s exterior, the reliance on artificial lighting will be reduced, and visual access and activity around the courtyards will be increased, promoting safer places through an eyes on the street principle. The location of the existing corridors within the central axes will be replaced with light wells that bring light and fresh air to the newly re-configured units, as well as new wet cores for bathrooms and kitchens within the apartment units. The mix of female dormitories and women-owned apartments will bring a new social and economic diversity to the building.

My proposal addresses the role of the architect in an environment such as Alexandra. I, for one, found the liberty, typically afforded in an academic project, restrained by the responsibility of working within the historic context and limited resources of the city.

Allison Schwartz is a designer at an architecture firm in New York City. Previously she has worked at architecture offices in Amsterdam, Caracas, and Philadelphia and has taught at Columbia’s MsRED and MArch programs as a teaching assistant. She received her Masters of Architecture from Columbia University’s GSAPP in 2013 and her Bachelor of Arts in Architecture and the History of Art from the University of Pennsylvania.