The Economics Behind Japan’s Obsession With Housing

Architects in Japan get away with a lot. Here’s why home owners don’t mind living in houses without windows.

Architectural fads come and go, but in Japan, the single family home remains a primary site for reinvention. But the country’s penchant for avant-garde housing may be driven by the country’s bizarre real estate economics, as much as by its designers’ creativity. These homes, mostly designed by young architects, often bewilder with their structural leanness or formal inventiveness. It can seem that in Japan, anything is permissible: stairs and balconies exist without handrails, rooms flagrantly cast open to their surroundings, or, in some cases, homes are built with no windows at all.

Photos of these whimsical, ironic, or otherwise extreme living propositions travel the blogosphere and social networks under their own momentum, garnering global exposure and international validation for Japan’s outwardly shy, yet media-savvy architects. After all, in Japan—the country with the most registered architects per capita–standing out from the crowd is the key to getting ahead for young designers. But what motivates their clients, who opt for such eccentric expressions of lifestyle?

An unconventional home requires an unconventional client, one who’s willing to take-on, or can afford to ignore, one or more types of risk: privacy, comfort, efficiency, aesthetics, etc. But Japan’s experimental commissions aren’t necessarily luxury villas for a wealthy cultural elite. Many are small middle-class homes, not a typology where we expect to find bold avant-garde design. So, what is it about Japan that encourages such everyday risk-taking?

In the West, deviation from societal norms can jeopardize a home’s value, since it may prove impractical or distasteful to future buyers. Bold design decisions can present investment risk, so clients usually temper their personal tastes and eccentricities accordingly.

At least that’s enshrined Western logic. Safe as houses, right? Travel to Japan and this home truth is turned on its head, largely because the Japanese can not expect to sell their homes.

Houses in Japan rapidly depreciate like consumer durable goods—cars, fridges, golf clubs, etc. After 15 years, a home typically loses all value and is demolished on average just 30 years after being built. According to a paper by the Nomura Research Institute, this is a major ‘obstacle to affluence’ for Japanese families. Collectively, the write-off equates to an annual loss of 4% of Japan’s total GDP, not to mention mountains of construction waste. 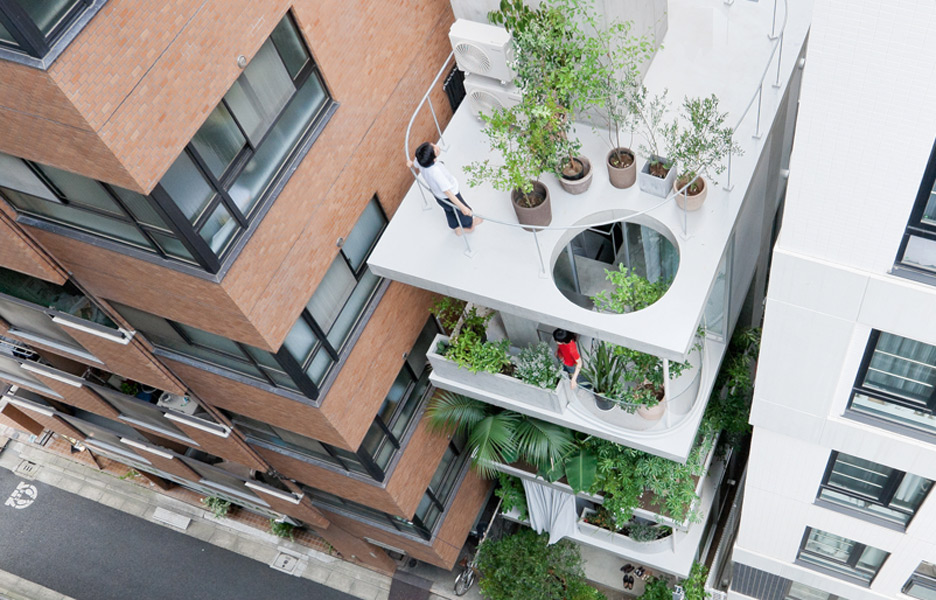 The Garden House by Ryue Nishizawa (2011) does away with facades altogether.

And so, despite a shrinking population, house building remains steady. 87% of Japan’s home sales are new homes (compared with only 11-34% in Western countries). This puts the total number of new houses built in Japan on par with the US, despite having only a third of the population. This begs the question: why don’t the Japanese value their old homes?

Here, without wishing to resort to clichés, a little cultural background offers some insight.

Firstly, Japan fetishizes newness. The frequent severity of earthquakes has taught its people not to take buildings for granted. And impermanence is an enshrined cultural and religious value (nowhere more so than at Ise’s Grand Shinto Shrine, which is rebuilt every 20 years). These oft-repeated truisms nonetheless fail to offer a sufficient economic rationale for Japan’s ingrained real estate depreciation. Its disposable attitude to housing seems to fly in the face of Western financial sense.

In the country’s rush to industrialize and rebuild cities decimated after WWII, housebuilders rapidly spawned many cheap, low-quality wooden frame houses—shoddily built without insulation or proper seismic reinforcement. Older homes from this period are assumed to be substandard, or even toxic, and investing in their maintenance or improvement is considered futile. So, rather than maintain or upgrade them, most are simply torn down.

Depreciation is also a holdover from the collapse of Japan’s economic bubble in the late 1980’s. Then, the ballooning price of land shot up so rapidly, buildings were considered temporary installations. This perception persists today, propped-up, in part, by policies that artificially sustain land prices, despite years of economic stagnancy and population decline.

The quality of today’s typical homes—most of which are robotically prefabricated—has greatly improved, but the earlier mindset remains entrenched as market logic. Depreciation is the mantra of housing appraisers. Yet, there’s no material reason why, if properly maintained or improved, these homes couldn’t provide shelter in perpetuity, like in the West, where reselling and moving homes several times throughout one’s lifetime is commonplace.

Japan’s army of loyal salarymen enjoy secure jobs for life, and rarely move to relocate to a new job. Although this is starting to change, a stable salaried job is still a prerequisite for a mortgage, which borrowers slowly repay in full over the course of their careers. Selling up—much less profiting from the resale—is out of the question, since no one wants to buy a pre-owned home. As the salaryman dutifully slaves away to pay off the mortgage, his or her property’s value is all the while depreciating, eventually leaving only the value of the land (minus the cost of demolishing the house). In other words, negative equity is the norm. Grinding economic and, consequently, geographic immobility is an entrenched reality for most Japanese homeowners.

Compared with other developed economies, where, mainly, the wealthy hire architects, many more young Japanese first-time homeowners buy land and hire an architect to build their new home, perhaps because—for all the economic reasons just discussed—they’re resigned to living in it for the rest of their lives. 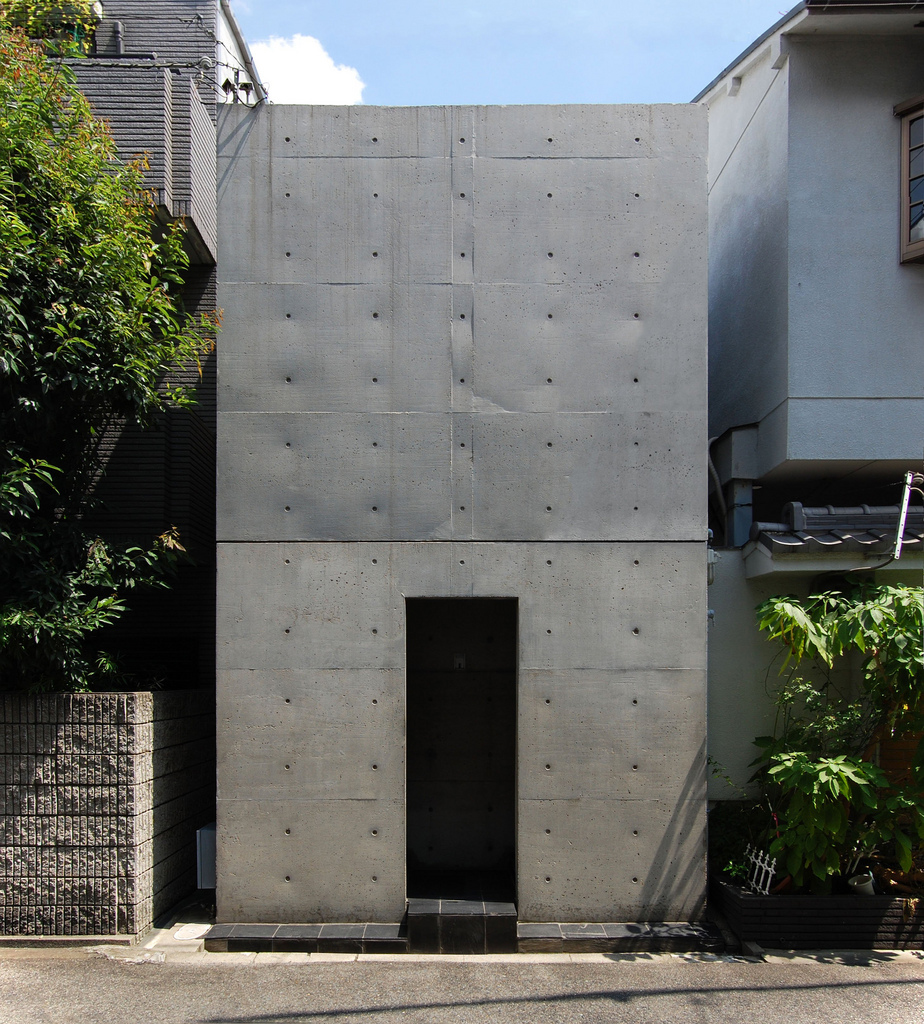 The Azume House by Tadao Ando (1976) was designed without any street-facing windows.

So, how do Japan’s bizarre real estate economics influence its architecture? Clients need not contemplate what a potential buyer will think 8-10 years into the future. This gives them and their architects greater personal freedom.

Without property values to safeguard, Japan, generally lacks planning scrutiny or incentives to protect and preserve local character. Neighbors are largely powerless to object on aesthetic grounds to what gets built next door. This is a boon to architects’ creative license, but it also reduces the collective incentive to maintain and beautify communities by, say, nurturing greenery or burying overhead power lines.

The freedom to build homes that are a highly personal expression of lifestyle, taste, and aspiration, makes Japan a fertile environment for architects and their clients to test the limits of residential design.

For architects, it also helps that civil lawsuits are rare. Unlike their litigation-wary European and American counterparts, Japanese architects rarely fear claims of negligence, emboldening them to take greater risks.

Japan’s younger architectural clientele may be more open to risk-taking at the behest of their architect, for whom each project presents an opportunity to test new and innovative ideas. Perhaps there’s also a measure of youthful naïveté as to the long-term consequences of design decisions that they, as end users, will have to tolerate for the rest of their lives.

It may seem sad that Japanese families slave, scrimp, and save to build a home, only to see their investment rapidly vanish over the ensuing 15 years. In this light, some of the avant-garde houses seem like fatalistic last hurrahs – follies to the futility of home ownership in Japan. Resigned to their predicament, but needing somewhere to live and raise a family, it’s little wonder that Japanese clients reclaim control and quietly rebel in the best way they can – through design.

Besides, they’ll eventually tear it all down anyway.

This article, by Tokyo-based architect Alastair Townsend, originally appeared on ArchDaily as “Why Japan is Crazy About Housing.”

Alastair Townsend (@AlaTown) is co-founder of Tokyo Architects BAKOKO. He also writes about architecture and housing in Japan at alatown.com. He was the former editor of the website ja+u (Japan Architecture+Urbanism) and editor of JA Yearbooks 1990-2011.