Five years after the Indian businessman Ratan Tata first claimed that he would build a car for under $2,200, we’re still trying to figure out how he did it. Tata is one of Cornell University’s most distinguished alumni, and he will return to the Ithaca, New York, campus next week to speak at a symposium […]

Five years after the Indian businessman Ratan Tata first claimed that he would build a car for under $2,200, we’re still trying to figure out how he did it. Tata is one of Cornell University’s most distinguished alumni, and he will return to the Ithaca, New York, campus next week to speak at a symposium organized in conjunction with the exhibition, Unpacking the Nano. Both the exhibition and the symposium seek to understand the phenomenon that is the Tata Nano: how it was conceived, engineered, and designed, but also how it has managed to capture the imagination of India and the world.

This is not the first time we are seeing the Nano in the U.S.: It was on display at the Cooper-Hewitt, National Design Museum in March 2010, and then travelled to the Detroit Road Show that year.  But this time, the little car is baring its guts. At the heart of the exhibition, in Cornell’s Herbert F. Johnson Museum of Art, is a completely disassembled Nano, every single one of its 2,000 parts on display. One of the key strategies in driving the cost of the car down was its innovative assembly – parts are combined and connected in smart ways, and in some places they were just glued together with high-performance adhesives.

But the low cost is only one aspect of the Tata Nano. It is an incredibly light car, as indicated by the panels on the walls, which list the weight and cost of each component, totaling to a mere 1,400 pound vehicle. Secondly, in a country that is still dominated by motorcycles, the Nano claimed to be a democratic vision of urban mobility – putting a car within the reach of all. Videos on a wall titled “1 km” give you a sense of what that actually means. Cornell students filmed the experience of travelling a kilometer on Indian roads in several different modes of transport – bullock cart, a rickshaw, motorcycle, and a Nano. And finally, the price itself is a concept we need to understand a little better, the exhibition suggests. For the $2,200 they might pay for a Nano, Indians could have had two motorcycles, three cows, 33 saris, 60 train tickets, five holidays in Thailand, three laptops, 1,200 packs of cigarettes, or 150 bags of rice. 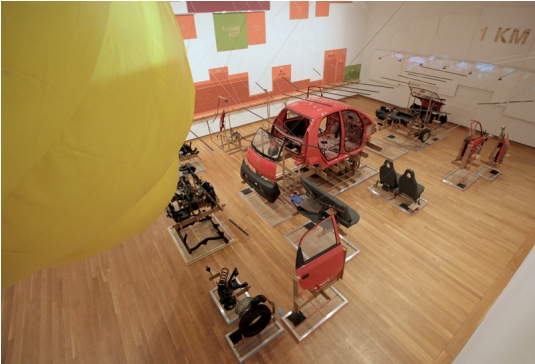 All very fascinating, no doubt. But the part of the exhibition that seems the most important to me is the 640-cubic-foot yellow balloon that emerges out of the exhaust pipe of the Nano, and hovers above the Johnson Museum, indicating the volume of carbon dioxide one of these little cars produces in one year. Back in 2005, when he was still dreaming the Nano up, Tata claimed that he would soon have a million of these cars on Indian streets. When the car became a reality, those numbers had some people celebrating a new era of automobiles in India. But it also had many of us dreading the havoc it would wreak on India’s already congested roads and polluted cities. 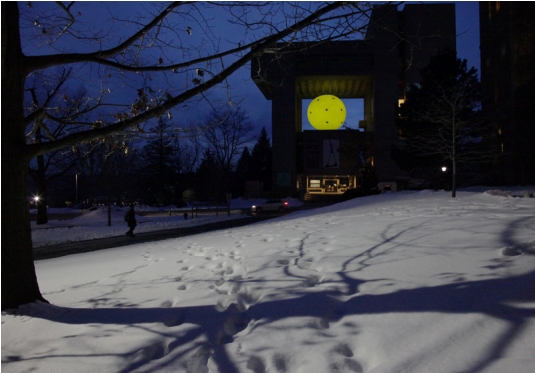 A glowing balloon, volumetrically equal to the Nano’s yearly emissions, hovering above the Johnson Museum building.

As it turns out, we needn’t have worried all that much. Over the past few months, the Nano’s popularity in India has waned considerably. Concerns over safety became acute last year, as Indian newspapers began reporting freak incidents of Nanos catching fire. By the end of 2010, sales figures had reached an all-time low, and if a report in the Washington Post is to be believed, they haven’t done much catching up since then. Even as the Nano continues to be lauded around the world, Indians aren’t really buying into the idea. In a recent customer satisfaction poll conducted among 9,300 car owners in 26 Indian cities, the world’s cheapest car lagged far behind its closest competitor. 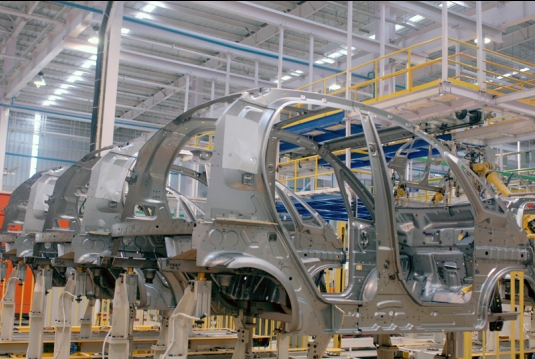 Ratan Tata’s dream for the Tata Nano has often been compared to the vision of another idealist, Henry Ford. The curators of Unpacking the Nano refer to it as the “second coming of Ford’s Model T.” And as the impressive list of speakers at next week’s symposium will no doubt discuss, the Nano has already had an equally far-reaching influence on the world of automobiles. Indians are proud of it, even if they won’t buy it. And several other manufacturers have begun to emulate it by developing small, cheap cars for emerging markets (Renault plans to unveil one this year.)

But the comparison to the Model T gives me hope for a different reason. The Model T itself was quickly outmoded by flashier cars, even though the idea of a standardized, widely available automobile never quite went away. People will always want cars, especially people in developing countries, where buying that first car is still a powerful aspiration. Ratan Tata has shown that it is possible to make a car available to them, but that car need not be the Nano.  Hopefully, this irresponsible little automobile will follow in the footsteps of its illustrious ancestor, and pave the way for more efficient, greener solutions.

“Unpacking the Nano” is on display until March 27, at the Herbert F. Johnson Museum of Art, Cornell University, Ithaca, NY. The symposium, “Unpacking the Nano: The Price of the World’s Most Affordable Car” will be held on March 10 and March 11, 2011.