The Venice Biennale’s Many Inequalities, In Map Form

Why should the best-located national pavilions, established over a century ago, assume importance by default, while more populous or powerful nations struggle for attention?

Originally published in ArchDaily, this article, by David Neustein and Grace Mortlock of Otherothers, explores a key paradox of the 2016 Venice Biennale: the disconnect between the geography of the topics on show and the geography of the Venice Biennale itself. With maps created by their students at the University of Technology, Sydney, they suggest new ways to explore the Biennale with Aravena’s theme in mind.

In announcing his theme for the 2016 Venice Architecture Biennale, “Reporting From the Front,” Biennale director Alejandro Aravena declared that “architecture is about looking at reality” and that “any effort to tackle relevant issues has to overcome the increasing complexity of the world.” Aravena has envisioned a sweeping exhibition of architecture’s “frontiers” and “margins,” as if he were a general surveying the global battlefield from above.

The greatest impediment to this admirable ambition is the architecture of the Venice Biennale itself. Marooned on its tourist island, the Biennale is an idealized world-in-miniature, free of the realities, confusions and conflicts of the world-at-large. The environment is timeless, picturesque, serene: hardly representative of the world’s “increasing complexity.” Within the Biennale gardens (Giardini), former Colonial powers occupy prominent permanent pavilions while other countries, including those of present-day significance, are consigned to the periphery, relegated to temporary off-site spaces, or else absent altogether.

While this has more or less been the case since the first Architecture Biennale opened in 1980, never has the disparity between the world within the Biennale, and the real world beyond, been more apparent or problematic. Why should the best-located national pavilions, established over a century ago, assume importance by default, while more populous or powerful nations struggle for attention? In an age of globalized architectural activity, does division into countries and territories still make sense? And if the Biennale’s buildings remain fixed in place, must the routes and pathways between be too?

Entitled “21st Century Giardini: New Itineraries,” this project addresses the widening divide between the world represented by the Biennale and the global reality. We have tasked Master of Architecture students from the University of Technology, Sydney, with producing new maps for Biennale visitors. These maps reorganize the visitor’s itinerary based on real-world and present-day concerns, providing meandering routes and pathways that extend beyond the Giardini and subvert the traditional hierarchy of participating Biennale nations. Collectively, the maps anticipate the reorganization of the Biennale in general—and Giardini in particular—in response to the globalized nature of contemporary architecture.

The following texts were provided by the creators of each map: 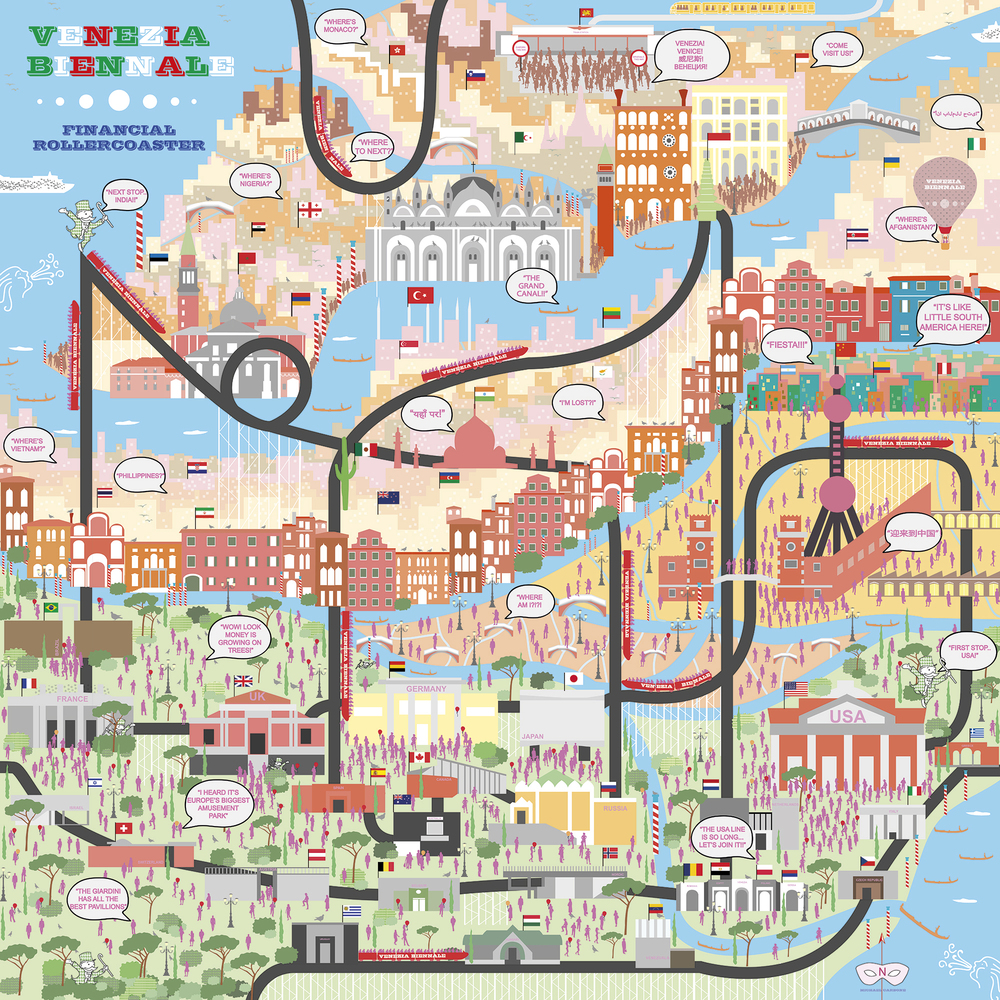 ​Gross Domestic Product (GDP) is one of the most persuasive indicators of a nation’s prosperity and living standards. GDP factors into international sociopolitical and financial relationships such as the Eurozone. The GDP of Venice Biennale participants is reflected in the spatial organization of the national pavilions, which has seen little change over the past century. According to the United Nations Statistics Division, approximately 88% of the nations exhibited in the Giardini and Arsenale are those with the highest GDP. It is no coincidence that many nations with lesser financial profiles are consigned to offsite locations in San Marco, Dorsoduro, Cannaregio and Giudecca. “Financial Rollercoaster” depicts the Biennale’s power hierarchy through a satirical amusement park journey. 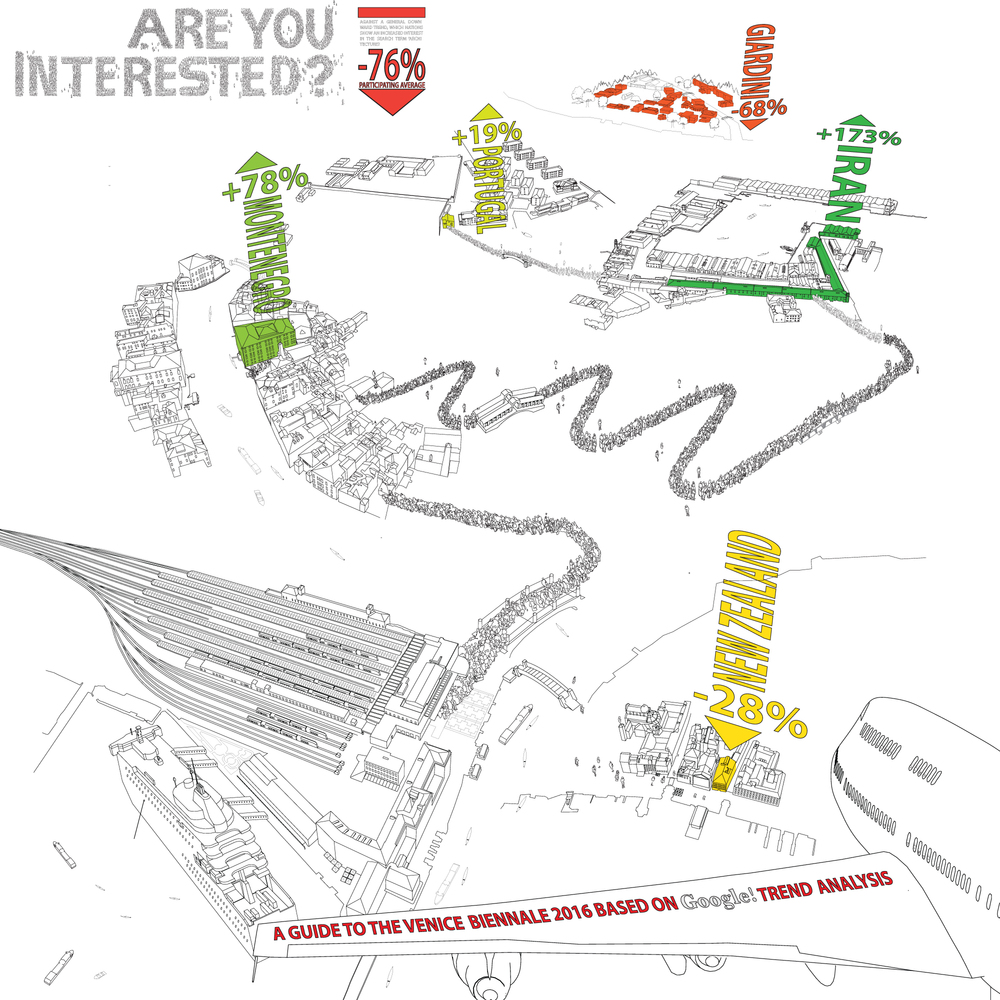 “Architecture has a fundamental and deep rooted problem with the idea of having an audience.” —Brett Steele, quoted in Four Conversations on the Architecture of Discourse (Architectural Association, London, 2012), p. 30

If internet searches are any indication, architecture’s worldwide audience may be in decline. The “Are You Interested” map utilizes Google Trends data on total searches for the term “architecture” from 2004 to 2016, adjusting for the various languages of participating nations. The map shows both a general decrease of 76% during this period, and a few surprising countries where interest continues to rise. While crowds continue to flock to the Biennale, how does this event foster global awareness of architecture? And how do we shift to the forefront the few countries with increasing audiences and interest? 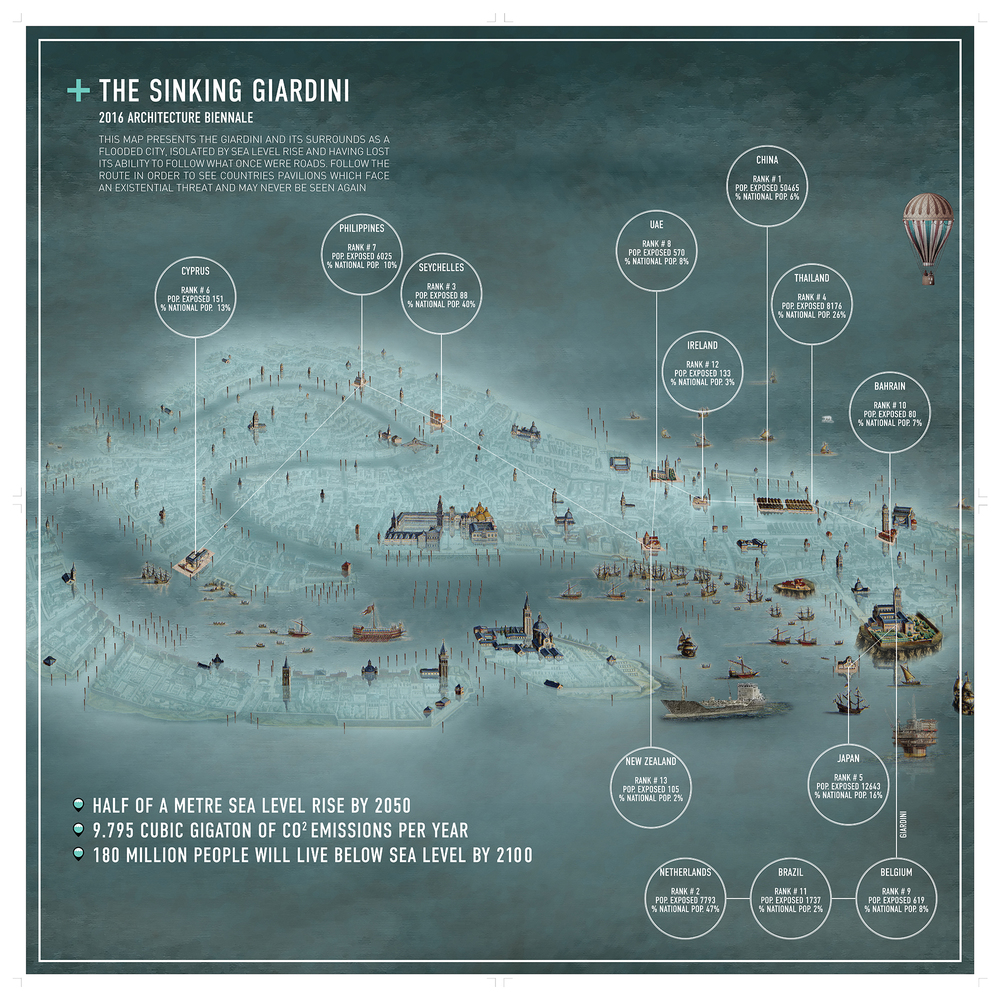 The “Sinking Giardini” is an itinerary for 2016 Architecture Biennale visitors that explores participating nations defined as being “at risk” due to climate change. Many nations are facing an existential threat due to rising sea levels and will consequently cease to contribute to the field of architecture in the not so distant future. This map represents Venice as a submerged city where nations that are most at risk are seen in their isolated future state, sinking beneath the floodwaters, detached from society and left to defend the front of climate change on their own. The biggest contributors to this phenomenon are also present, fittingly protected by the high ground of the Giardini, a carefully guarded settlement in which other nations can only hope to find permanent refuge. 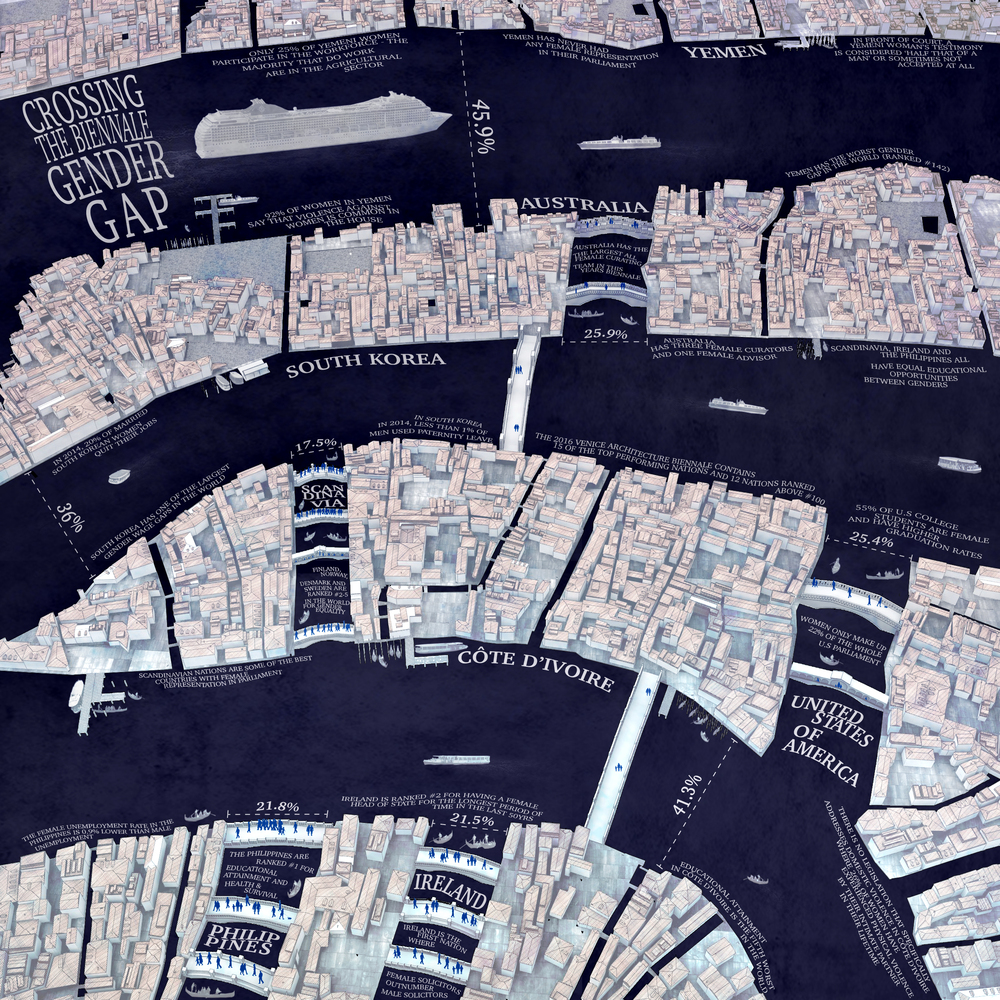 “Reporting From the Front” promises to foreground the architect’s responsibility to those living in the poorest conditions. However one of the most significant issues affecting living conditions is absent from this Biennale: gender inequality. According to the World Economic Forum’s Gender Gap Index, the 2016 Venice Biennale features 15 of the top 25 most equitable and 12 of the worst performing nations including Yemen, the World Economic Forum’s worst offender. The global disparity between women and men’s living conditions and basic rights is explored in this map through the analogy of Venice’s canals and the relative difficulties of crossing.

Reporting From the Front
by Kim Angangan 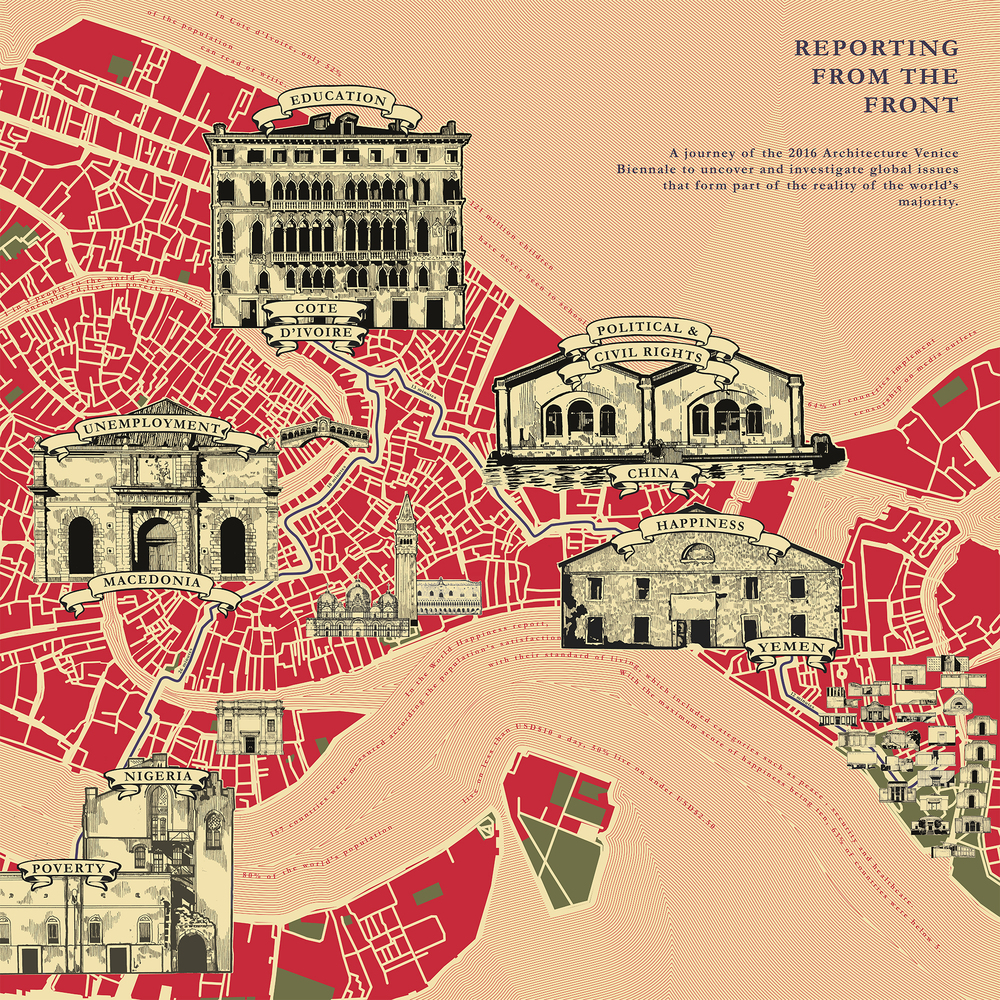 “An undeniable majority of the world’s population face crises over issues of poverty, education, unemployment, low standards of living and lack of civil and political freedom,” writes Alejandro Aravena.

Aravena’s Biennale promises to shift the focus from the wealthiest and most prominent of nations, to those that sit lowest on the Human Development Index. But in order to do so, the visitor must leave the Giardini altogether. I’ve provided a handy map for visiting the remote locations of the relevant participating nations, dispersed around Venice.