Turning Parking Into Parklets Across the U.S.

Urban citizens get a break in tiny public parks

Imagine on a late summer day, taking a stroll through downtown in some U.S. city. Hoping to rest your legs, you spot some tables and seating down the street, nestled between greenery in a small but inviting alcove. A great place to take a quick break, you think, as you sit on an artistically crafted seat.

This is no outdoor café, nor is it a park or sidewalk bench. In fact, you have just encountered a “parklet,” an on-street parking spot turned into a tiny public park.

In urban environments containing asphalt roads, concrete sidewalks, and brick buildings, finding a spot to sit and relax can be difficult.

To address this, towns and cities across the country are reimagining and transforming car-oriented parking spots into pedestrian-friendly parklets: one to three-spot mini-parks – owned and managed by a business, local government or other entity – that feature seating, tables, greenery, and sometimes bike racks. Along with public plazas — think the pedestrian-friendly Times Square — and bike lanes, parklets are another example of how planners are chipping away at old notions that streets should be primarily for cars. 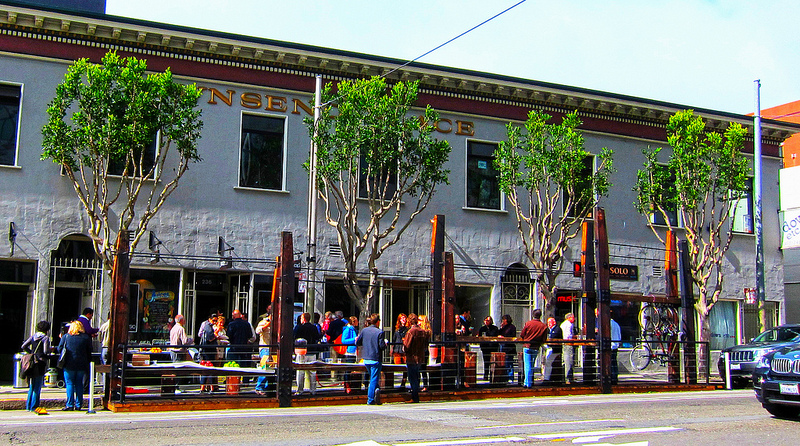 Parklets already have been successfully implemented in cities like San Francisco, Philadelphia, and in New York. In addition to fostering pedestrian life, parklets promote creativity, the arts, and use of sustainable practices, such as construction with locally sourced materials. Currently, RPA’s New Jersey office is working on a Together North Jersey Local Demonstration Project to implement a parklet program in Morristown, N.J.

In addition to providing open space and community benefits, parklets encourage local residents and visitors to linger in downtown hotspots. In large cities like Philadelphia, small cities such as Olympia in Washington and local downtowns like Collingswood, New Jersey, anecdotal evidence suggests parklets have had a positive impact on economic development, encouraging people to patronize local businesses.

Parking spots are seen as valued commodities, but they are seldom used all the time. While parklets can be implemented on main streets and other highly trafficked areas, they also can be constructed on streets with fewer in-demand parking spots.

Creation of passive recreation spaces on the right-of-way can, of course, raise safety concerns. Most towns and cities adequately address these concerns by restricting where parklets be placed; for example, most don’t allow parklets on streets with speed limits over 25 mph. Similarly, parklets can’t obstruct fire extinguishers, manhole covers or other utilities, and are usually constructed in ways that allow for easy disassembling.

If done well, parklets are a creative way to reimagine street space to best support a mix of downtown activity.