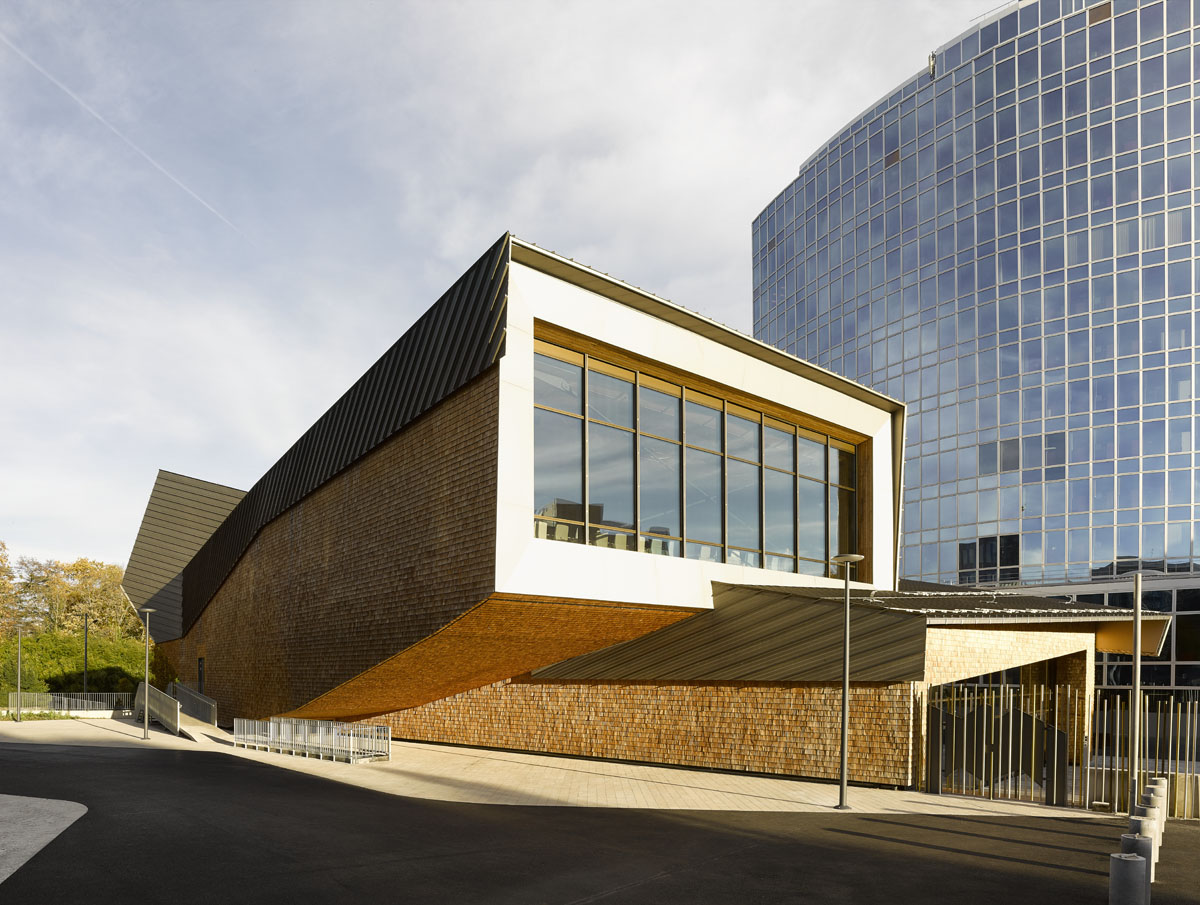 In 1997, a 39-foot-tall wooden chair standing on three legs was installed in Geneva’s Place des Nations. Called Broken Chair, the sculpture by Daniel Berset is a symbol of the fight against land mines. At the end of last year, it was joined across the road by another eye-catching wooden structure: a 62,431-square-foot conference hall for the World Intellectual Property Organization (WIPO).

Describing itself as the global forum for intellectual property services, policy, information, and cooperating, WIPO is largely a self-funding agency of the United Nations, with 188 member states. The conference hall’s architect, Behnisch Architekten, has a long-standing relationship with the organization. Eleven years ago, explains the firm’s partner Stefan Behnisch, it won a competition for a new administrative building that would include a conference hall. However, the brief changed over the years, and the building they completed seven years later was hall-less.

Towards the end of that construction process, WIPO “came back and said they needed the conference hall,” says Behnisch. WIPO’s existing hall held only around 400 to 500 people, he explains, and there is a dearth of big conference halls in Geneva. This meant that if WIPO could build one, it could be rented to other organizations. 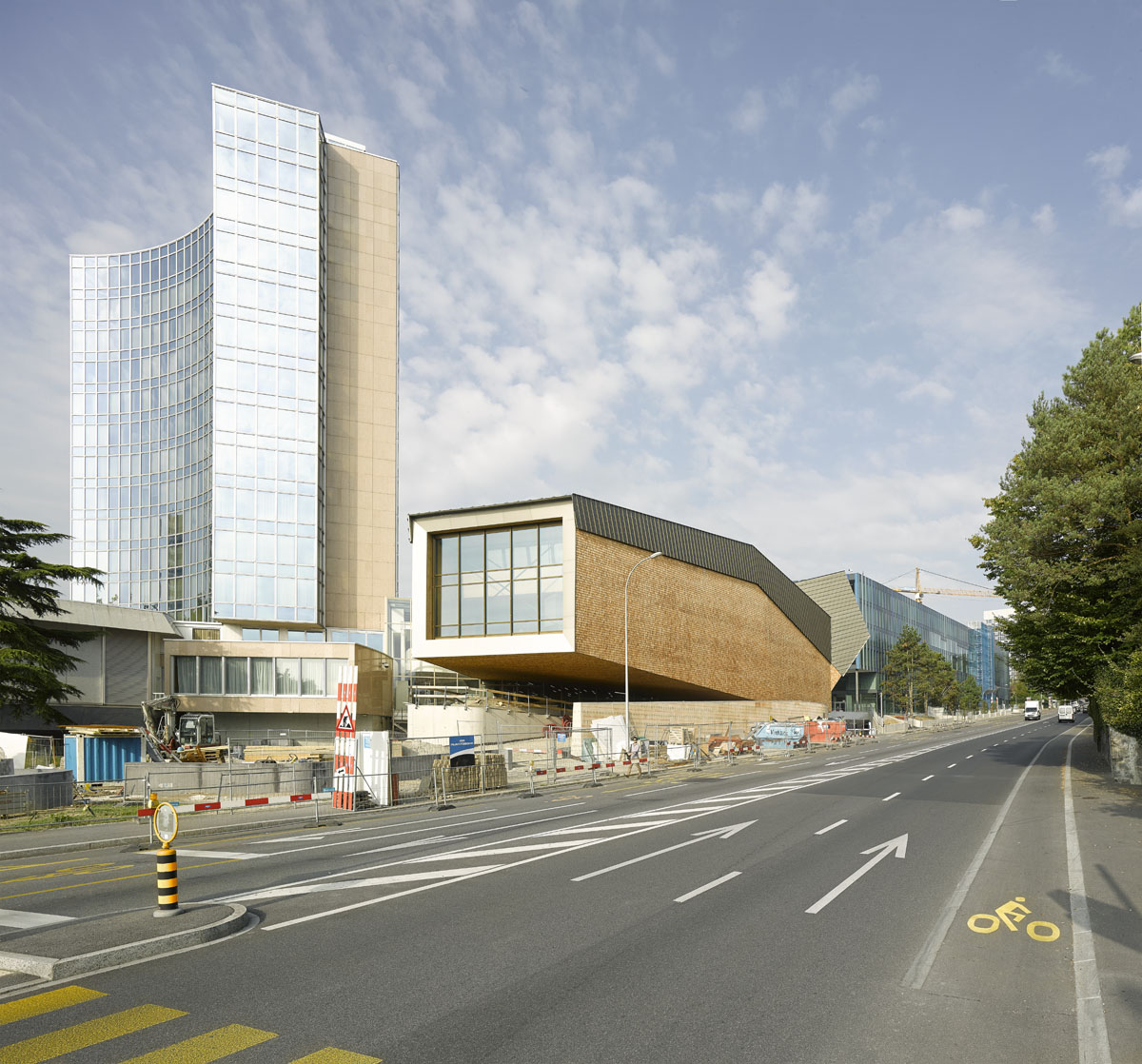 The largest of the WIPO​’s three windows maintains a profile in keeping with the low streetscape on that side of the building. The dramatic size, which takes in a view of the Alps, makes it unmistakable, though.

There were three drivers for the new building: weight, the environment, and energy consumption. The weight issue was the most pressing, so to speak, as the hall was to be built on top of an underground car park that the architects had just completed.

As for the environment, Behnisch says that halfway into the building of the administrative center, the UN woke up to the world’s environmental crisis. “And we said, ‘Guys, look who is talking here.’” While the administrative building didn’t go as far as he wanted in sustainability terms, Behnisch found an ally in WIPO’s director general, Francis Gurry, for the next project.

“He is a very approachable person, who suggested we use the conference hall to make up for the environmental shortcomings of the administrative building,” says Behnisch. That meant looking not just at the building’s energy consumption, but at its construction materials—in this case, timber.

“As trees grow, they embed CO2 and they only give CO2 off again when they burn. The structure is close to CO2 neutral, and it could always have a second life.” Behnisch explains. Concrete, on the other hand, “has a huge CO2 content.” 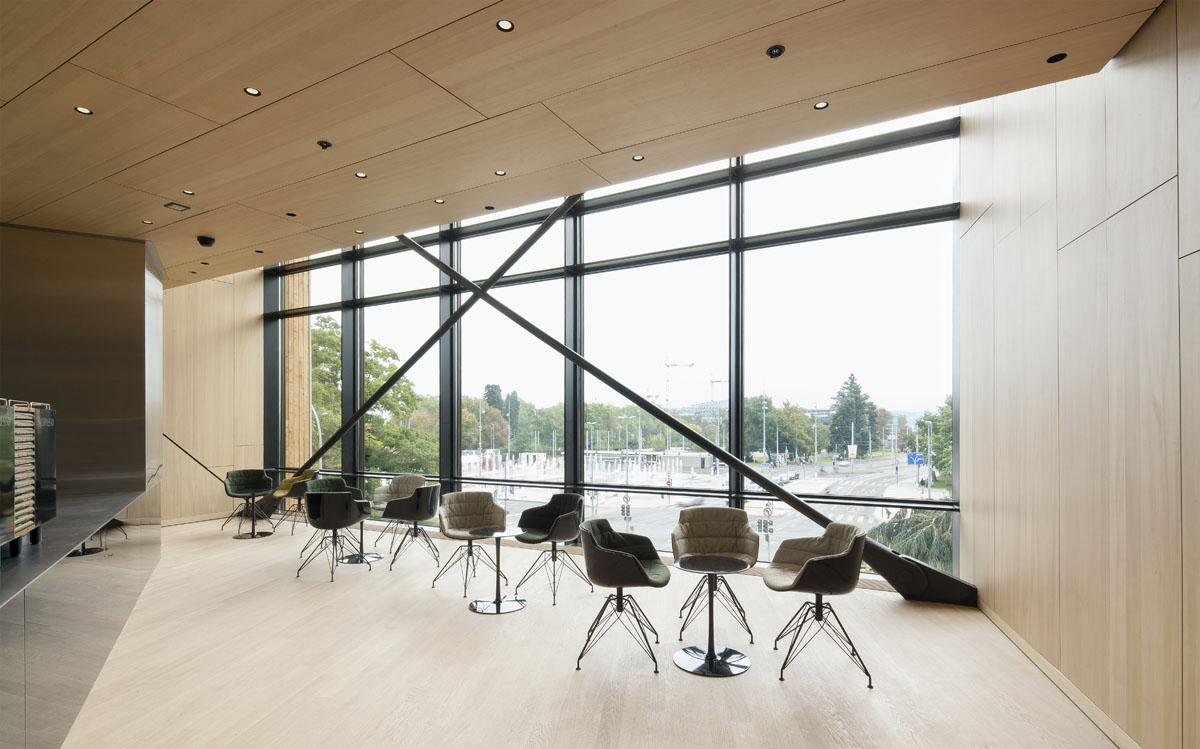 Wood is used in a number of ways throughout the building. Laminated pine panels were assembled using a system called Ferwood, where threaded rods and other steel construction elements are glued inside the panels. All the spaces of the upper floor, including the common areas (above), are clad entirely in such panels.

As for energy consumption, conference halls have very particular needs. “They are used on average twice a month for a total of six hours,” explains Behnisch, “so the building needs to be heated up and cooled down very fast, unlike an office, which needs a stable climate. Wooden buildings are ideal for this, as they are easy to heat and cool.”

Romania and Finland are two of Europe’s best-known timber-producing countries, but “our goal was to use local timber (from no more than 62 miles away), including scrap wood,” says Behnisch. His firm is no stranger to the material, having designed a number of schools and housing schemes in wood, notably a social-housing project in Ingolstadt-Hollerstauden, Germany.

For the undertaking in Geneva, the architects surrounded themselves with specialists: Schlaich Bergermann and Partners in Stuttgart for the concept; and for the execution, a consortium including Hermann Blumer (a highly acclaimed wood engineer who has designed wooden structures for Shigeru Ban), Jean-Marc Ducret, and Thomas Büchi. 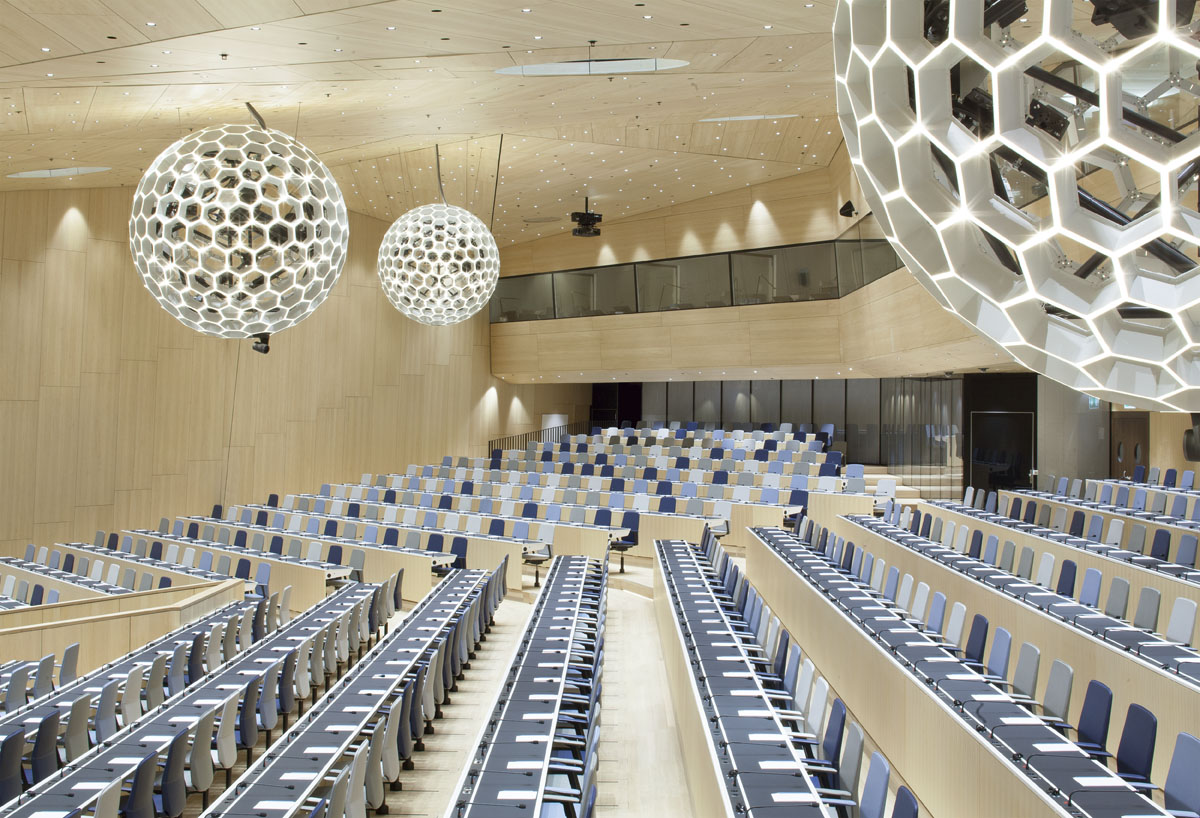 The interior walls of the conference room are layered with a veneer of white fir, which has acoustical properties. Dramatic lighting spheres also carry speakers, and hang over the space, which can seat up to 1,014 people. 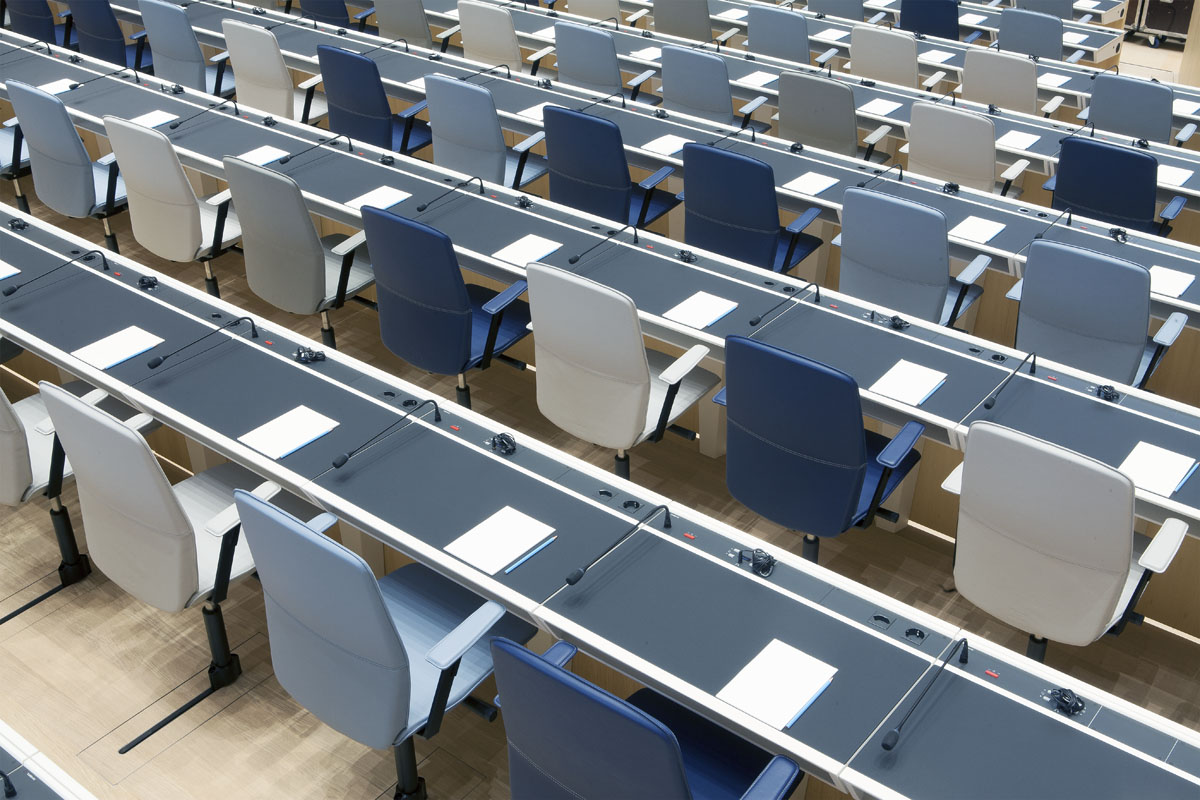 The chairs, were produced by Poltrona Frau Contract for the project. Clad in shades of blue and mounted on rails, the compact and lightweight seats with customizable details are now also available to specifiers as the Geneva Chair.

The WIPO’s new conference hall is situated on Chemin des Colombettes between the organization’s main building, Bâtiment AB, and the administrative building, on what Behnisch describes as a “tight and cramped” site. Much of the hall was prefabricated nearby and then shipped to the site. The supporting structure for the polygonal form is made up of assembled box girder elements—pinewood beams that are connected to slabs above and below so they do not slip.

“According to the engineers, the wooden cantilever of 115 feet is the longest of its kind in the world,” says Behnisch Architekten project partner Patrick Stremler. This unsupported cantilever was achieved by ‘welding’ wooden laminated panels together, meaning threaded rods and other steel construction elements were glued inside the panels. “This allows the joints to bear bending movements as well as tensile, compressive, and shearing forces,” explains Stremler.

Inside the hall itself, which is situated on the second and third floors, there’s a veneer of white fir on top of the engineered wood, which acts as acoustic paneling. Outside, larch shingles clad the facade. Interestingly, this is the only wood that traveled some distance—from Siberia—because by growing at the Russian province’s altitude, it is pest free, according to Behnisch.

As an architectural feat, Geneva’s new timber structure is pretty impressive, and it certainly waves the flag for alternative building methods in the UN campus’s vast sea of glass.