In the hands of NRI, a leading fabrication service, 3-D printing is a finely honed craft. 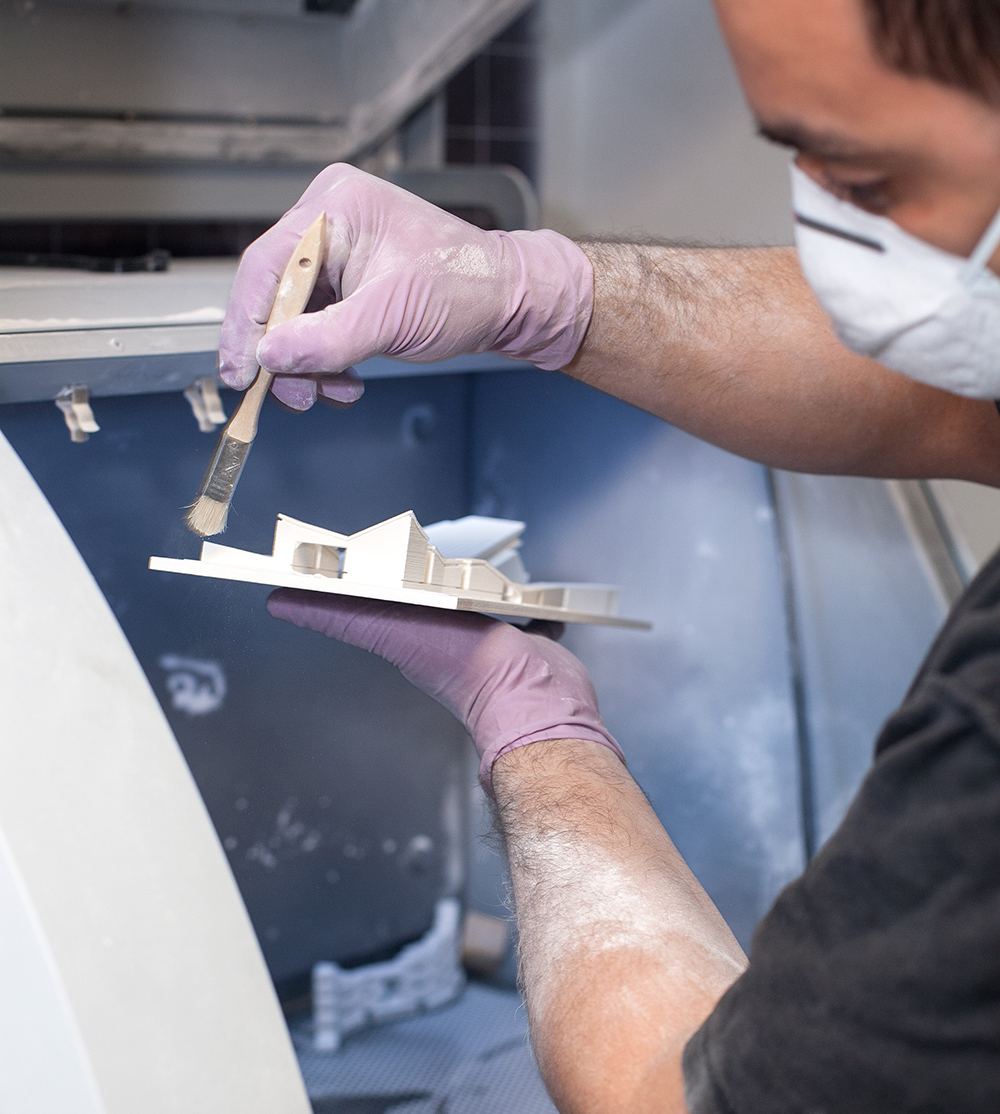 In addition to working with 350 clients in New York alone, NRI maintains machines and technicians in-house at the architecture firm Kohn Pedersen Fox Associates (KPF). Above, NRI’s Frank Medina cleans up a model at KPF.

First things ﬁrst: The term “3-D printing” is a misnomer according to Arthur Young-Spivey, the digital fabrication specialist at NRI—a 116-year-old, New York–headquartered supplier of reprographic services to architects and their tradespeople. “The correct term is ‘additive manufacturing,’” he explains. “People call it 3-D printing because it enables you to wrap your head around it, but in some ways it’s confusing.”

Young-Spivey has a point, as the process by which a digital ﬁle is converted into an object isn’t “printing” in the commonly understood sense of applying pigment on a substrate. With 3-D printing, he says, “Instead of using paper, you’re printing with powder or plastics. It’s all one layer at a time.” The thinner the layer, the better the quality, and the longer the process takes. “And there’s always post-production processing, to clean up the model,” he adds. “That’s why ‘additive manufacturing’ is a more accurate description.”

Second point: The printer matters less than the ﬁle from which a model is created. Indeed, says Young-Spivey, mastery of the diabolically difﬁcult software remains key to producing a great result. “3-D software is complicated—understanding the subtle nuances of  the different tools in a program, so that you can achieve a speciﬁc outcome—and to learn it takes years,” he says. “Moving parts, integrated pieces, tolerancing, accounting for shrinkage or expansion, even stress analyses—all of  these are considerations when you’re putting a design into a computer.”

This is not to minimize the importance of  the printers, which have their own degrees of complexity. “We have multiple ones from different vendors,” Young-Spivey observes, walking me past standard- and high-resolution machines that print in ABS plastic, polyjet UV-cured liquid, and powder in NRI’s Manhattan loft space. “We want to achieve certain looks and different results.” These include multiple colors, patterns and textures, and ﬁnishes ranging from the hard and opaque to the ﬂexible and translucent. “You can even be representative,” he says. “If you’re doing an analysis of how wind circulates around a building, you can print it as part of the model.” 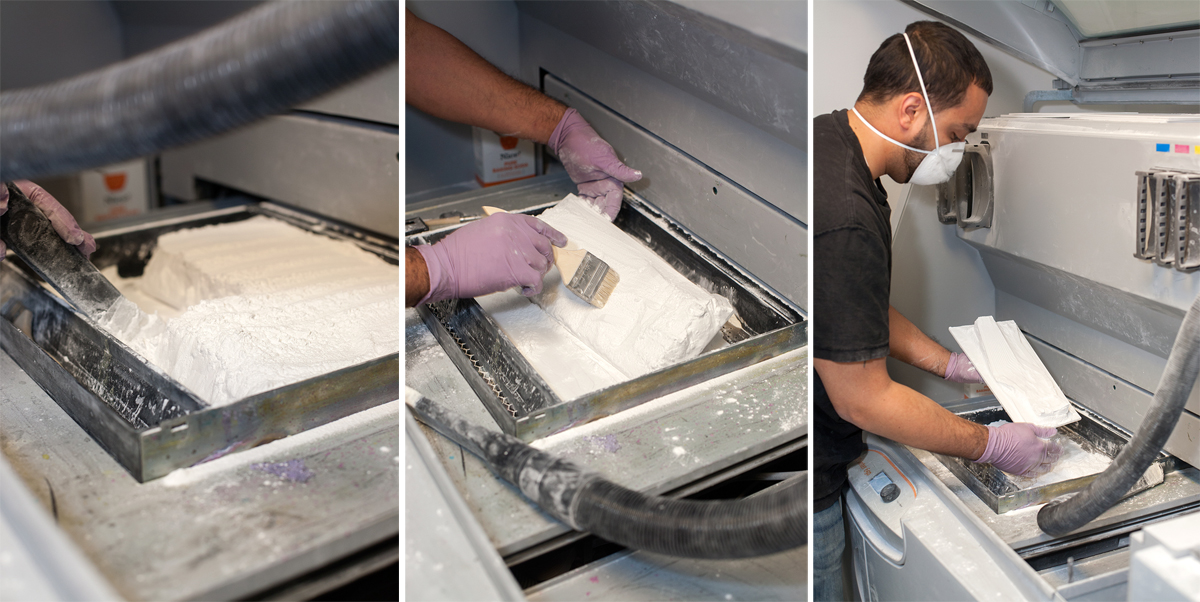 The process of lifting a finished print out of NRI’s ZPrinter 650. 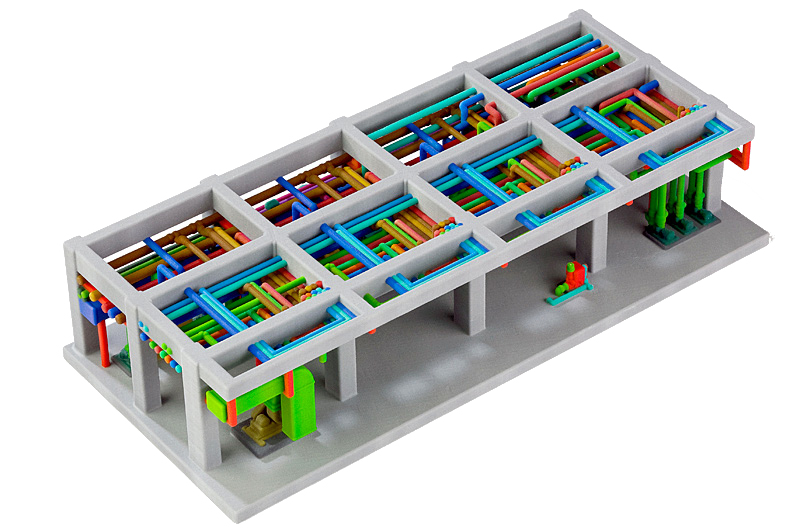 Multicolor 3-D printing can model complex MEP systems, as in this NRI model.

And there is a fourth component: 3-D scanning. “Often it’s the only way to take something from the real world and put it in the computer,” Young-Spivey  says. When I express puzzlement as to its value, he explains that a sculptor could model a head in clay, scan it into software, insert digital designs into the skull, then print out the enhanced object. “That would be very difﬁcult, if not impossible, to do by hand,” he says. Entire rooms can be scanned as well, a beneﬁt to interior designers presenting plans to clients. 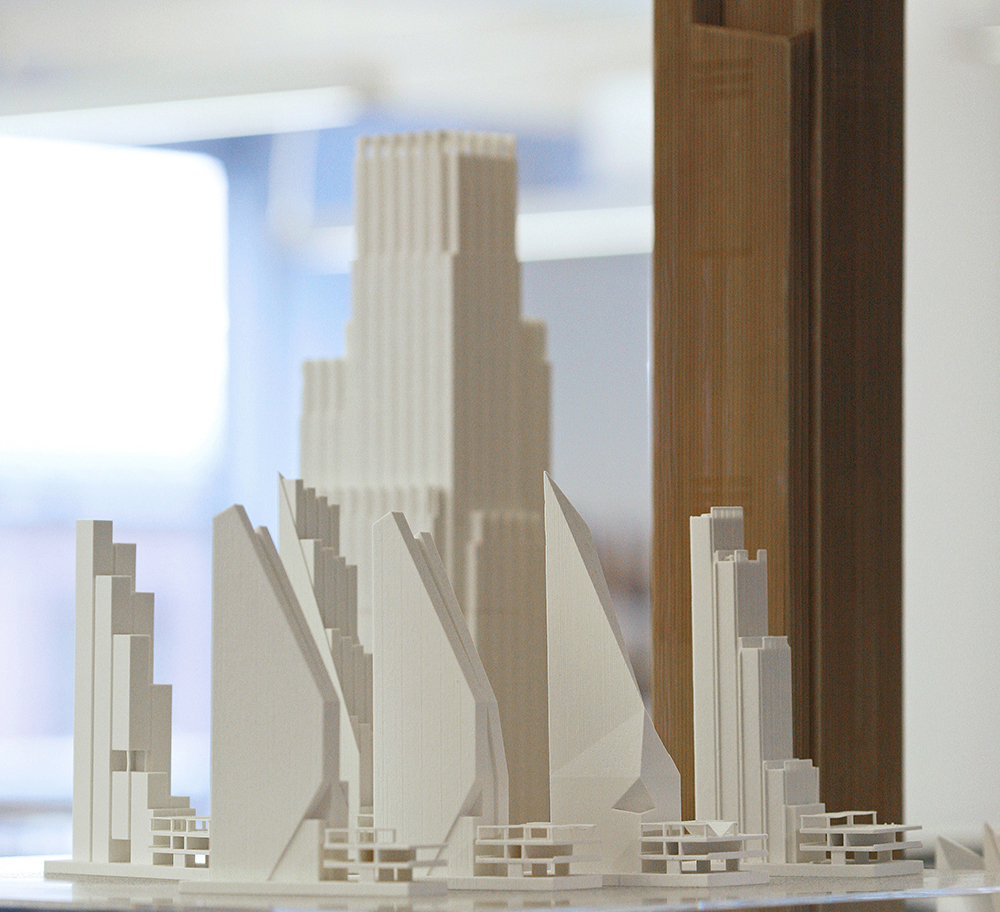 The architecture ﬁrm Kohn Pedersen Fox Associates (KPF) ﬁrst encouraged NRI, which was handling the ﬁrm’s traditional reprographic needs, to add digital fabrication to its skill set in 2005. It also keeps several of NRI’s machines—and technicians—in its New York ofﬁce full time. “I didn’t know anyone who’d thought of linking up with a third-party provider to receive these services,” recalls James Brogan, KPF’s director of ﬁrmwide technology. “But we knew it would be important to our process.” Nor was NRI at all familiar with the technology. “The guys here had to research it, because it’s a very different beast than 2-D plotters and printers,” Young-Spivey says. Today, 3-D printing is widely embraced by the industry, and NRI’s New York client list (there are another 11 ofﬁces nationwide) has grown to about 350, comprising mostly architects. The company’s services range from simply printing out ﬁles that are sent to them, to partnership arrangements like the one with KPF. NRI also works with clients to make sure their ﬁles are printable, adjusts designs to suit the machines’ capabilities, and offers seminars to enlarge ﬁrms’ understanding of what printers can do. The goal, says Justin Levitz, NRI’s director of 3-D technologies, “is to keep our clients state of the art.”

The advantages over traditional model making are numerous. Utmost, despite the lengthy print-out times, is speed. “We’ve developed a process wherein you submit your ﬁles by 4:30 p.m., the job runs overnight, and in the morning you have your model,” says Brogan.“In one ‘build’—as they call a print run—you can create multiple models. We do 35 to 40 a week.”

If the computer freed architecture from the right angle and allowed it to become more free-form, Young-Spivey suggests, the 3-D printer compensates for a model maker’s difﬁculty in translating curvilinear complexity into an accurately constructed object. (This is while acknowledging that the technology is enhancing, rather than replacing, old-fashioned handwork. “At the end of the day, it’s just another tool for making something,” he says.) Another advantage is the level of detail a high-resolution printer is able to realize. “We do basic conceptual models, but we’ve also evolved into incredibly speciﬁc facade studies,” Brogan says. “You can really see the curtain wall, mullions, and corner conditions.” And that’s a capability that’s no less helpful with client presentations.

For years people bought cheap chicken and beef and didn’t care where it came from. Then they got interested in locally grown food, and that started a movement. The same thing will happen with 3-D printed products.

The ability to crank out numerous versions of a concept is of even greater beneﬁt to the industrial design world, in which, as Young-Spivey puts it, “every product goes through 10,000 iterations.” In addition to speeding up prototyping, 3-D printing lets designers go to market quickly, and respond with alacrity to consumer feedback. Prior to starting bhold, an Internet-based design company that 3-D prints its products, NRI client Susan Taing worked in a family business that imported goods from China, and she was frustrated by historic manufacturing patterns. “All ideas have to go through large companies, because of the amount of capital needed to make an order, so that stiﬂes creativity,” Taing explains. “You have to anticipate six to nine months in advance what people will want, because that’s how long it takes for an order to come to market. If things do well, you wait six to nine months for your next shipment. And if they don’t, you have your order sitting in inventory. You won’t improve the product because you’re focused on getting rid of it.” Taing had worked in product marketing for Google and says she wanted to merge her tech background with manufacturing and the creative process. And bhold, which offers a line of compact objects like the bneat earbud organizer, proved the perfect vehicle. “We started in April, and within three months we launched four products.” Taing also created a bhold labs program, which enables consumers to receive prototypes and give feedback, so the delay in product improvement isn’t months or years. 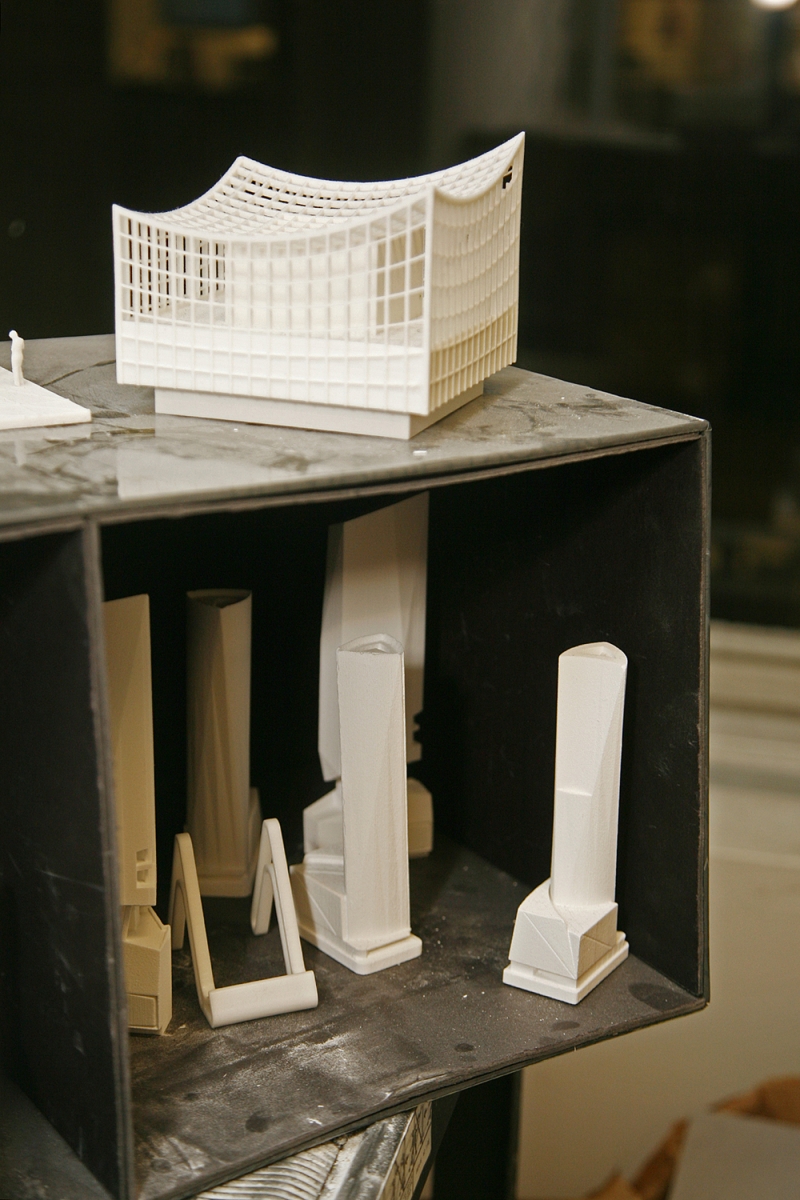 “Materiality will be huge,” Young-Spivey says when asked about the future. “Right now, there are a few hundred materials you can 3-D print, and that will expand. You’ll also be able to print multiple materials at the same time.” He picks up a computer mouse from his desk, constructed from a hard plastic, rubber, and metal. “How far are we from the time when I can print out this entire object? That’s when things will get disruptive,” he adds, suggesting a change in the global production model to one in which large inventories are replaced by objects printed to order. Taing hints at something similar. “It’s like the food industry,” she says. “For years people bought cheap chicken and beef and didn’t care where it came from. Then they got interested in locally grown food, and that started a movement. The same thing will happen with products—we’ll go back to a more artisanal market, with a lot of smaller local hubs, enabled by technology.”

As for Brogan, his vision is simple, utilitarian—and home-based. “Desktop printers, that can do a high-quality model in a few hours, spread throughout the ofﬁce,” he says. “It could take ﬁve years, but that’s where things are going.”