What’s It Take to Preserve a Brutalist Building?

Single-glazed curtain wall, Harvard Graduate School of Design, Gund Hall (John Andrews, completed 1969).All photos courtesy Bruner/Cott More from Metropolis Today we face the challenge of a divided voice among preservationists: There are those who have a long-held reverence of original materials and those who recognize this way of thinking as unrealistic for many modern buildings.The […] 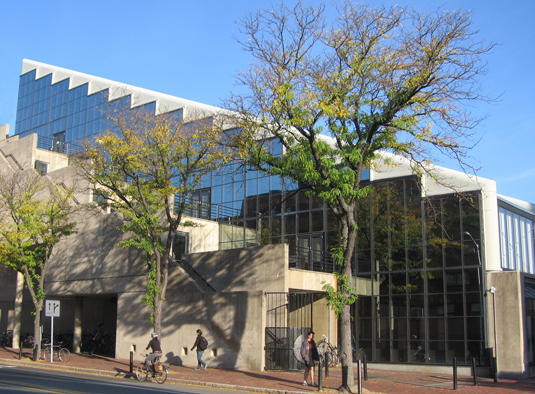 Today we face the challenge of a divided voice among preservationists: There are those who have a long-held reverence of original materials and those who recognize this way of thinking as unrealistic for many modern buildings.

The preservation ethic that has guided American and European architects regarding the repair, restoration, and adaptive reuse of historic buildings was originally derived from principles of fine arts conservators. William Morris, the English artist and textile designer, was an originator of the Society for the Protection of Ancient Buildings (SPAB). The society was formed in the Victorian period as a reaction to the demolition of Gothic church interiors to make way for the new. Morris and his fellow Arts and Crafts advocates wanted to protect and conserve authentic, original, historic material with all of its inherent craftsmanship and association with lives past intact. Their fundamental credo was to “repair rather than replace.” The Secretary of the Interior’s Standards for the Treatment of Historic Properties, established in the wake of the 1966 National Historic Preservation Act, is a direct product of this Victorian preservation ethic, almost universally applied to craft-laden masonry and wooden structures from the eighteenth and nineteenth centuries.

But “craft” is not what mid-twentieth century modern architecture is about. Post-World War II design and construction eagerly adopted both the pretense and the practice of “industrialized” building. The term “Brutalism,” which references beton brut (French for raw concrete), defined a style in which both cast-in-place and precast concrete could be structural materials that remained exposed for both interior and exterior finishes. This approach announced a new aesthetic in which labor-intensive decorative finishes and materials associated with traditional architectural styles were summarily dismissed. The fundamental industrial precept of the style drove a deep wedge between popular taste and contemporary architecture.

As a consequence, the preservation community is often split about whether unpopular, poorly performing, mid-twentieth century modern buildings should be protected at all and, if we keep them, what criteria for the treatment of the original building ought to apply. Precast elements integrated into monolithic concrete building exteriors, such as single-glazed steel windows, may be original, but they are no longer seen as practical or environmentally responsible. Retaining them can pose insurmountable physical and financial problems when the buildings are required to meet today’s standards of being weather-tight and energy efficient. The owners and occupants of Brutalist buildings are caught in the dilemma created by the original material vs. original appearance debate.

For instance, at Josep Lluis Sert’s Boston University School of Law Tower, we recognized early on that the root cause of precast concrete failures is when the reinforcing steel is too near to surfaces exposed to rain. Out of 700 precast concrete fins on the Sert building, about 100 of them have major cracks and large areas of lost and degraded concrete. If we repair these elements in situ, we will not be able to remedy the fundamentally defective placement of reinforcing steel and face the same failures soon after the repairs.

One of 100 out of 700 precast fins where rebar placement caused loss of concrete. In situ repair cannot provide the same longevity as a new precast fin.

As renowned buildings of the mid-twentieth century cross the 50-year threshold, attempts to  rehabilitate them will likely be caught between the conflicting requirements of energy-related building codes and the Secretary of the Interior’s Standards. In practice, many preservation agencies and advocacy groups have already shifted from the Secretary of the Interior’s–derived conservation ethic to a more complex evaluation of costs and benefits—cultural, ecological, and financial. And there is a growing acceptance of using replacement elements that match the original appearance of windows, precast concrete, and other sensitive building assemblies rather than replicating them. While good preservation practice will continue to seek to retain original materials and assemblies where possible, the balance is likely to shift toward replacement as more mid-twentieth century buildings reach the need for renewal.

The anomaly of treating industrially produced buildings as if they were handcrafted has begun to be acknowledged by federal, state, and local historic commissions, which are demonstrating a flexibility on specific projects, though the published Secretary the of Interior’s guidelines remain in place. This increases the burden of risk for institutional owners. It also acts as silent deterrent to reinvestment in our Brutalist building stock. Next time we’ll explore the roles building owners and clients have in saving these buildings.

Henry Moss, AIA, LEED, is a preservation expert and principal at Bruner/Cott & Associates, a Cambridge, Massachusetts, architecture and planning firm.