AIA Honors the Best New Architecture of the Year

Eleven buildings were the recipients of the association’s 2015 Honor Awards.

Helmed by a jury of thirteen top architects, including Laurinda Speer of Arquitectonica and Jill Lerner of Kohn Pederson Fox, the AIA’s Honor Awards for Architecture are its way of highlighting each year’s best buildings. Dating back to 1949, the competition simply seeks the most “outstanding architecture” regardless of other factors—any building designed by an architect licensed in the United States and completed after 2007 was eligible for this year’s awards. The winning group usually contains a diverse range of architectural building types, anything from small residences to major airports. Past winners have ranged from Marlon Blackwell Architect’s Ruth Lilly Visitors Pavilion to OMA’s Milstein Hall at Cornell University. This latest batch of winners cleaves closer to institutional clients but features a strong streak of historical restorations and additions. 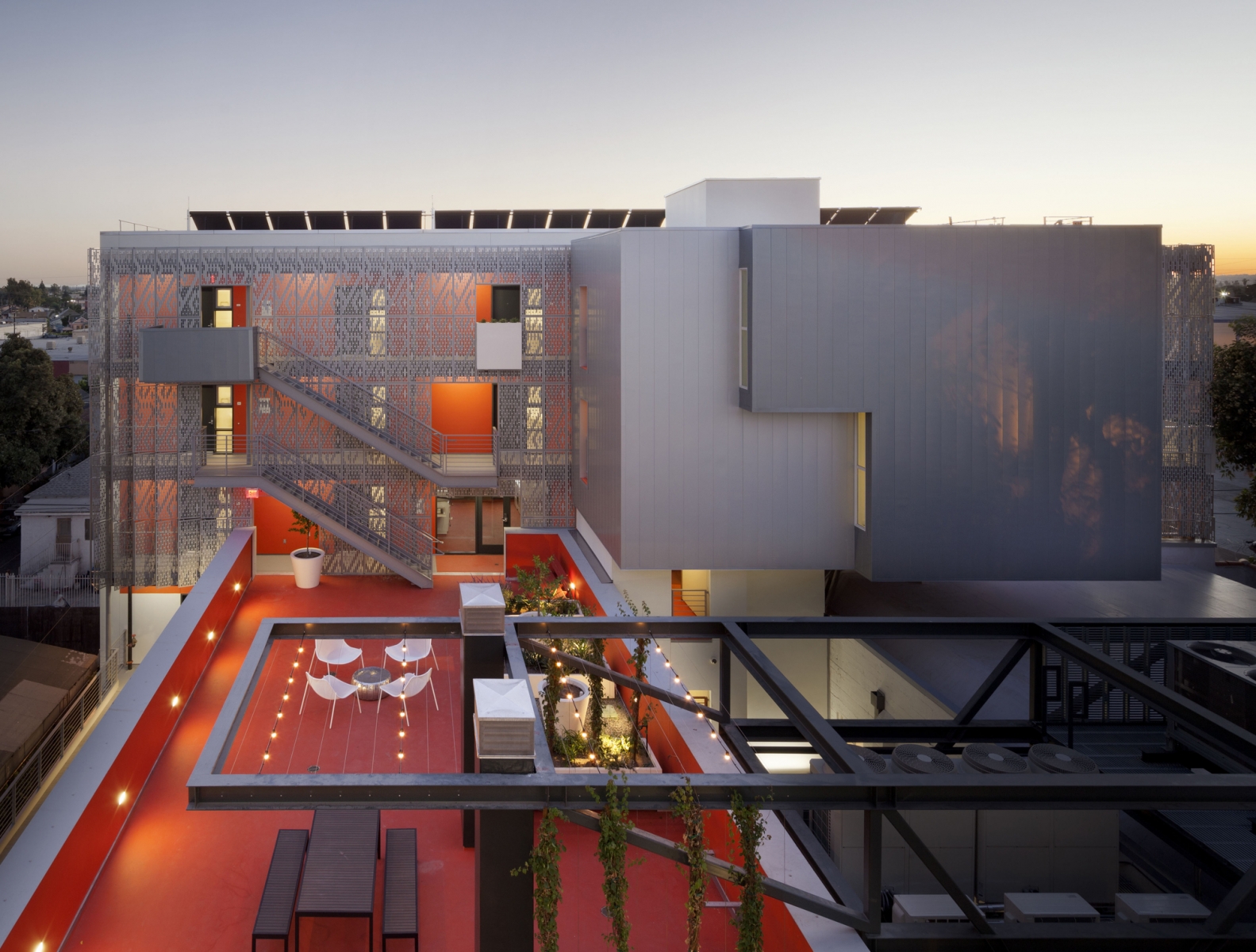 Previously the 28th Street YMCA, the original building featured recreational and athletic amenities, as well as housing for young men who couldn’t stay at hotels due to Jim Crow laws. The 24,200 square foot Spanish Colonial-styled building was completed in 1926 but was run-down by 2007, at which point it was purchased and repurposed as affordable housing and community support facilities. The lower floors were renovated with historical accuracy, while a five-floor addition features compelling metal-screen cladding. 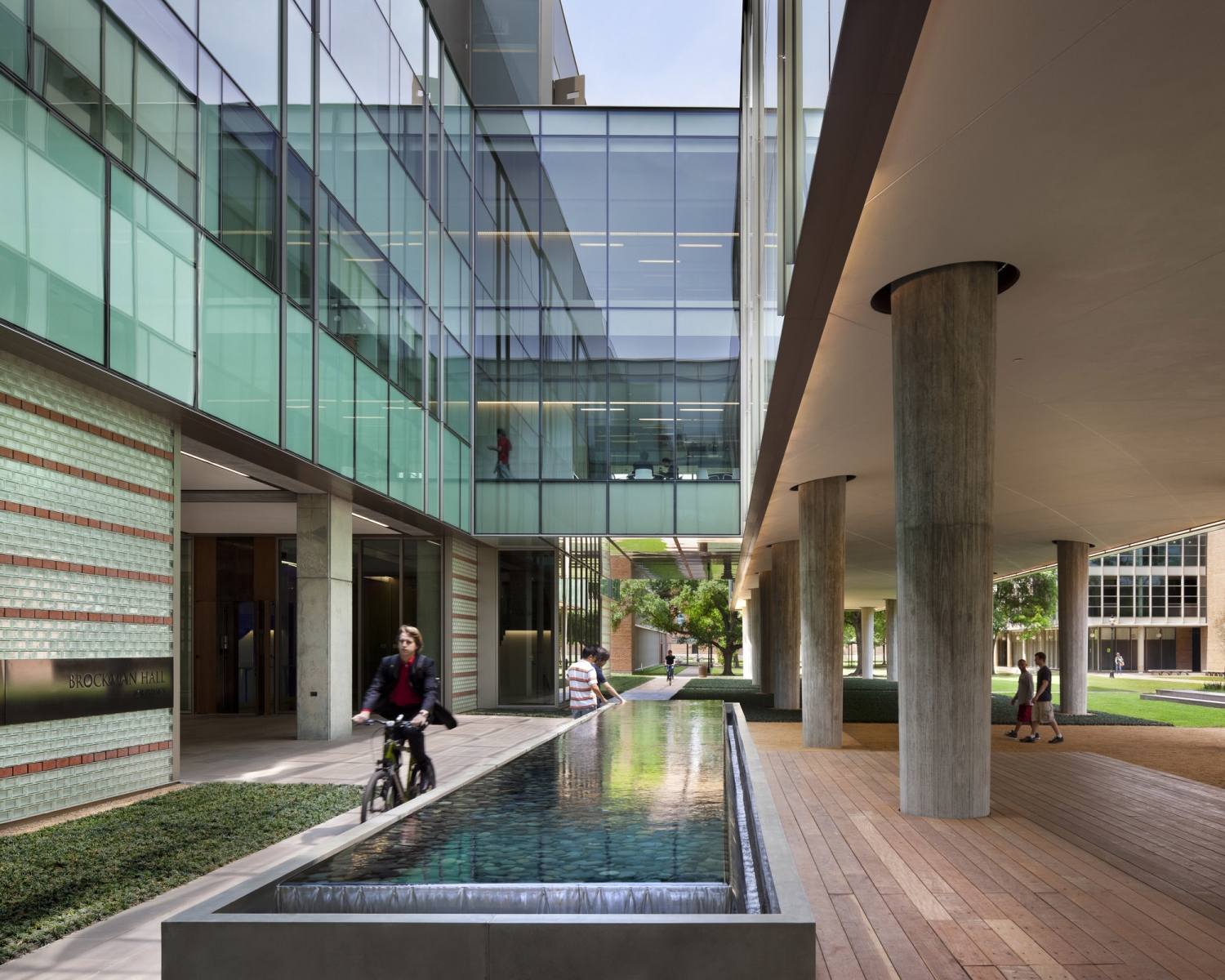 Charged with housing highly sensitive equipment in a collaborative environment, the architects crafted a sheltered common area of walkways and gardens beneath two wings of laboratories and offices. While the inner facades of the wings are entirely glazed, the south, exterior-facing elevation features colored aluminum behind a terra-cotta sunscreen. The most vulnerable scientific equipment is located underground, while the roof is covered in vegetation and filters storm water. 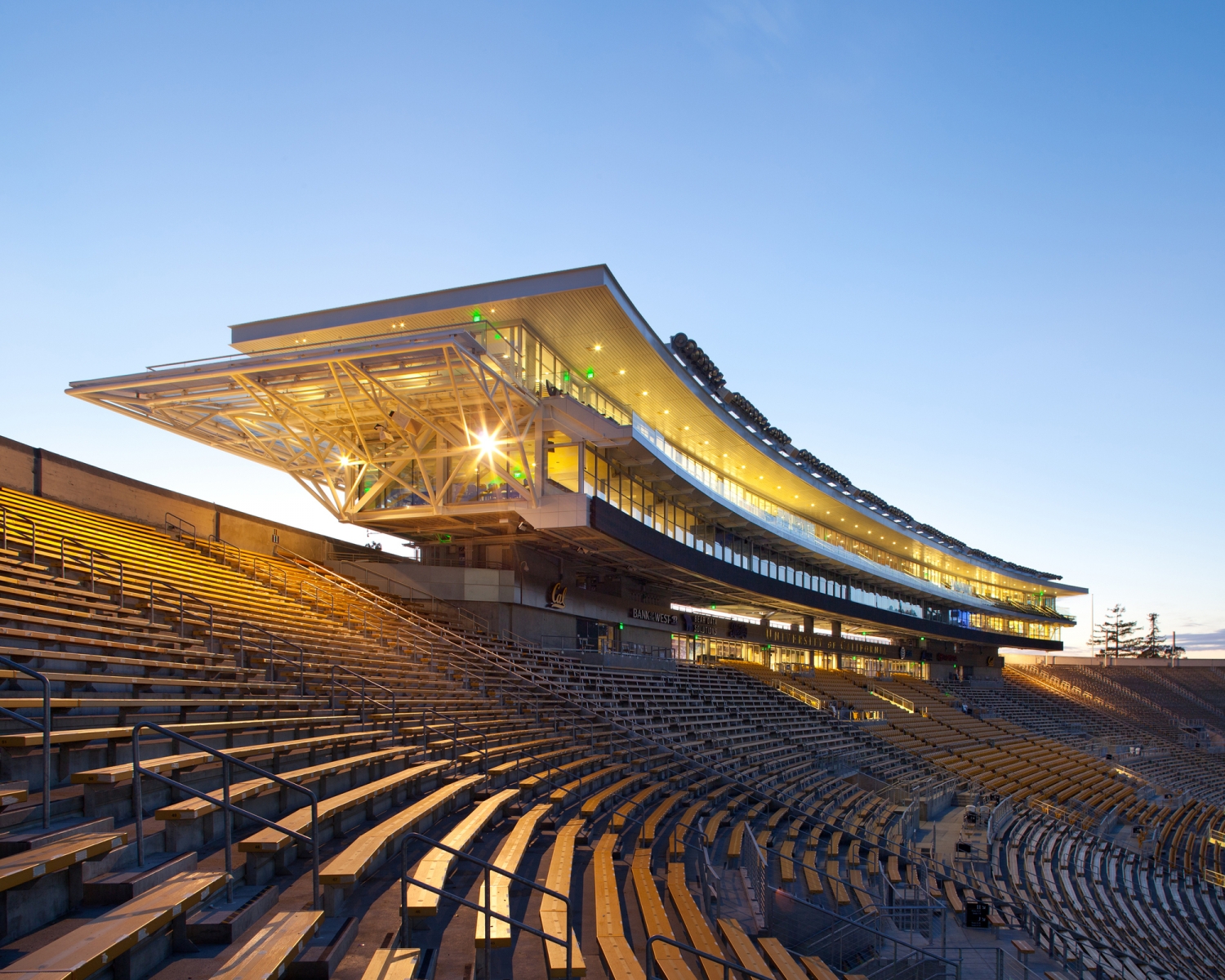 This iconic 92-year-old campus stadium and athletic facility underwent an extensive historic restoration and expansion. The stadium was entirely replaced and its base structure expanded to accommodate new training and academic centers. 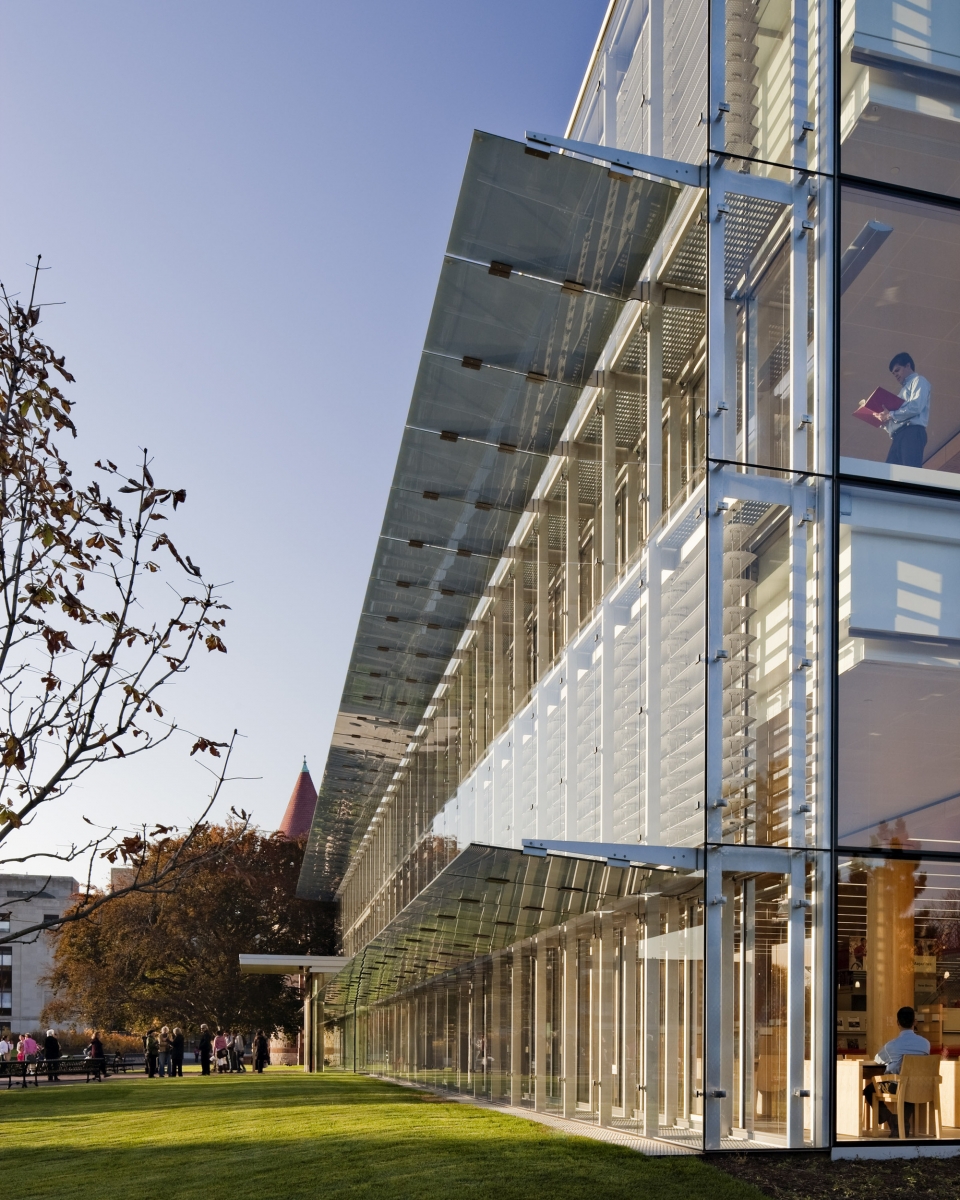 Linking to an existing library building dating to 1889, this transparent 76,000-square-foot addition is outfitted with extensive shading devices and special low-iron glass. The architects had to utilize additional thermal measures to keep the space warm in the winter and cool in the summer, but their efforts paid off: The library’s openness and visual connection to the surrounding park has made the “reading porches” integrated along the library’s edges highly popular. 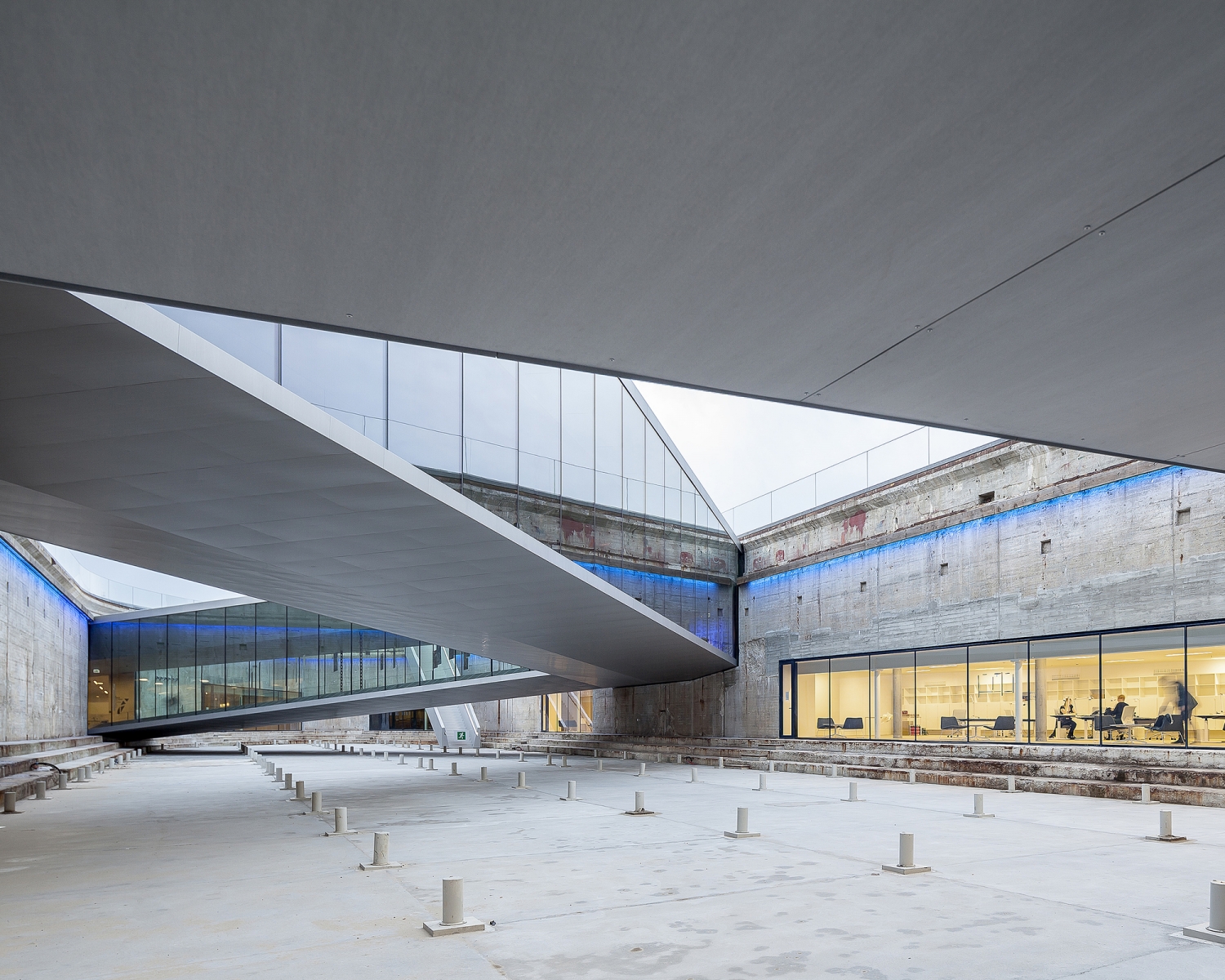 Built into an empty dry dock, the museum’s facilities had to be kept below ground to preserve views of a nearby historic Unesco-protected castle. A large void in the museum’s center enables sunlight to reach the exhibition spaces while criss-crossing bridges connect the different galleries. 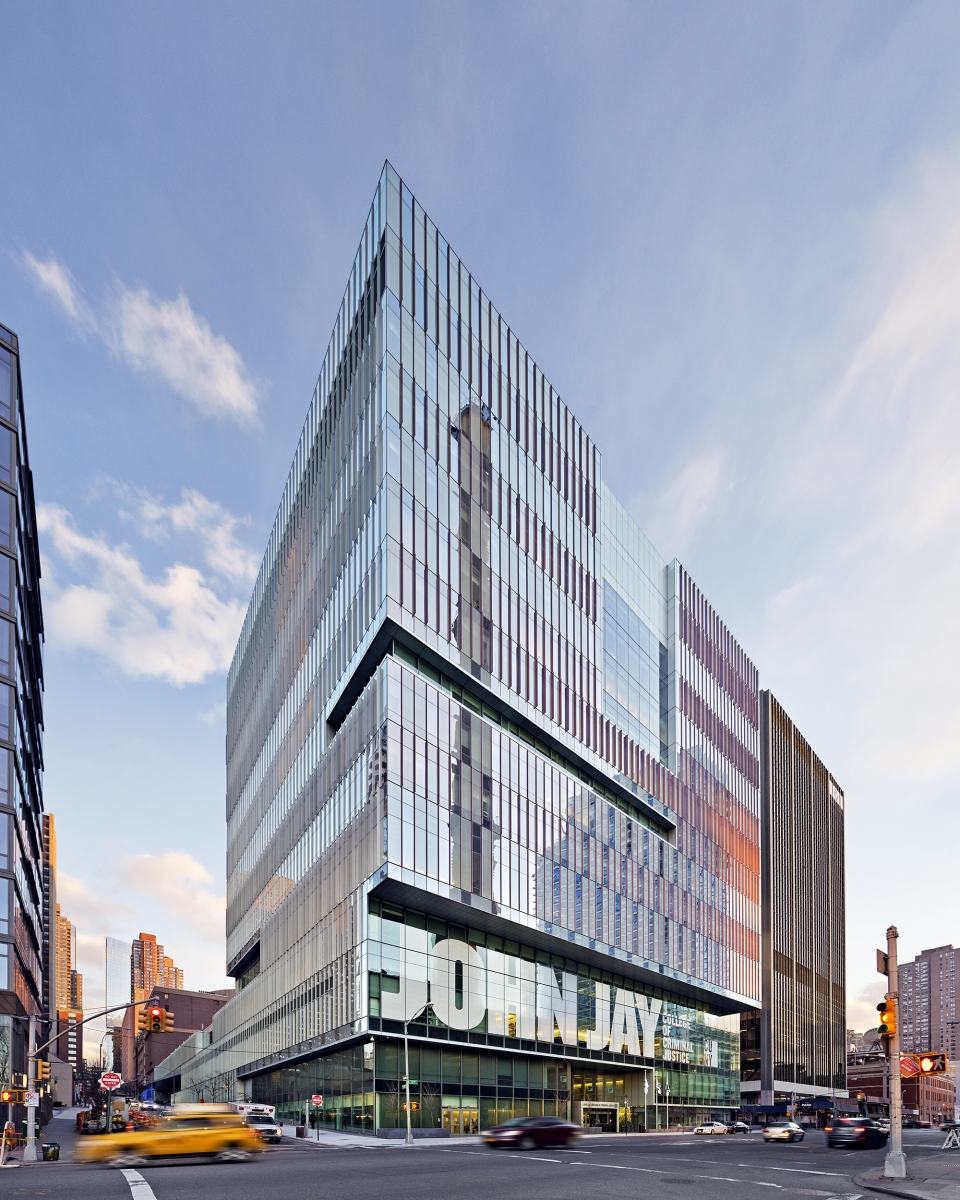 Located on 11th Ave., between 58th and 59th Streets, the entire college campus fits into a single 625,000-square-foot building, whose massing consists of a podium and a 500-foot tower. The project’s principal features are the expansive greenspace atop the podium and a continuous pathway of amphitheater seating, stairs, and halls that begin at the street-level main entrance. This cuts through the podium and culminates at the tower’s entrance. 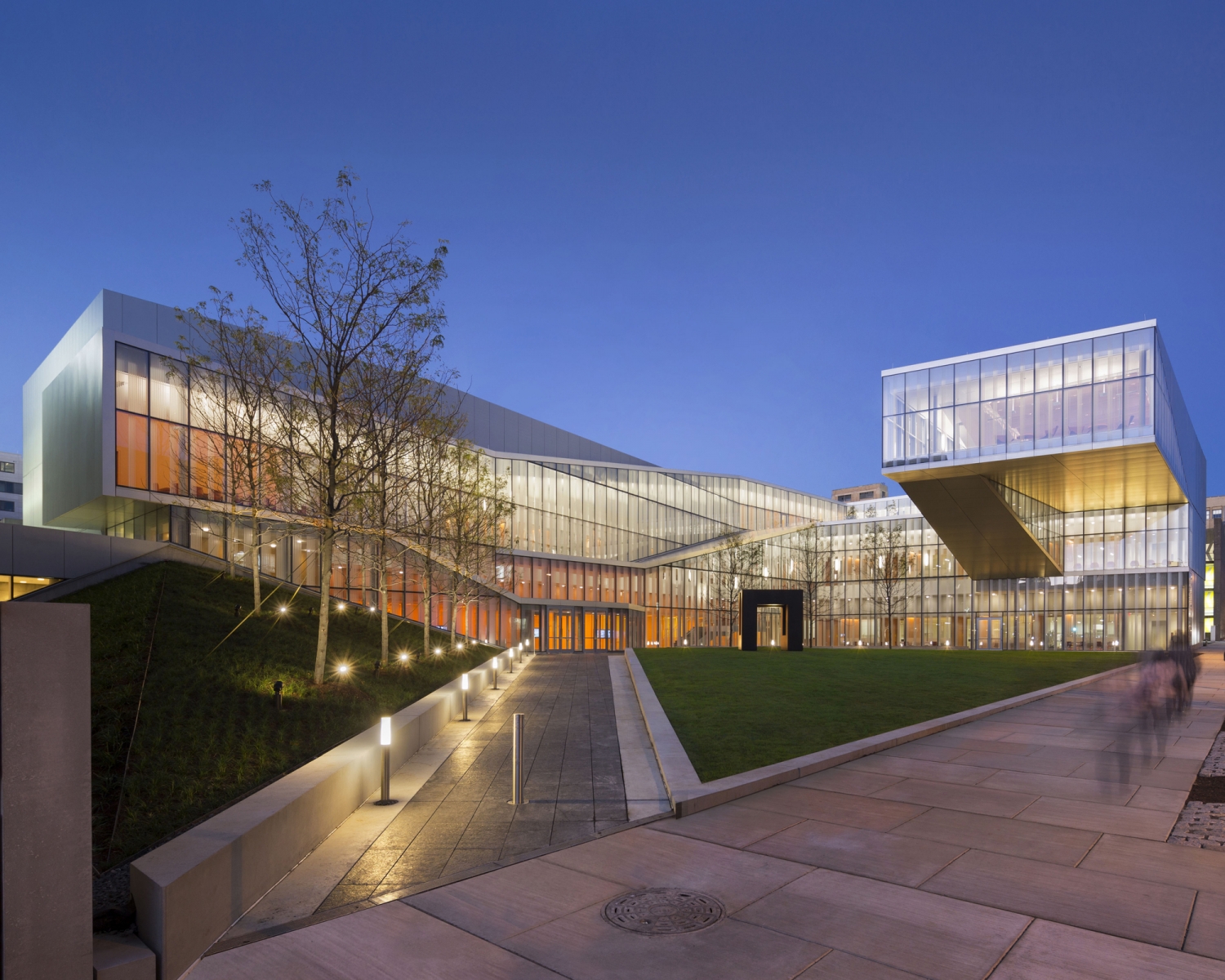 Cantilevering 68 feet over a grass quadrangle, the center’s prominent “forum” hosts public events and commands views of UPenn’s surrounding campus. The building is filled with advanced research laboratories, but its other major architectural feature is social: a monumental stairway, located in a three-story public gallery, that sports meeting tables for students, researchers, and visitors. 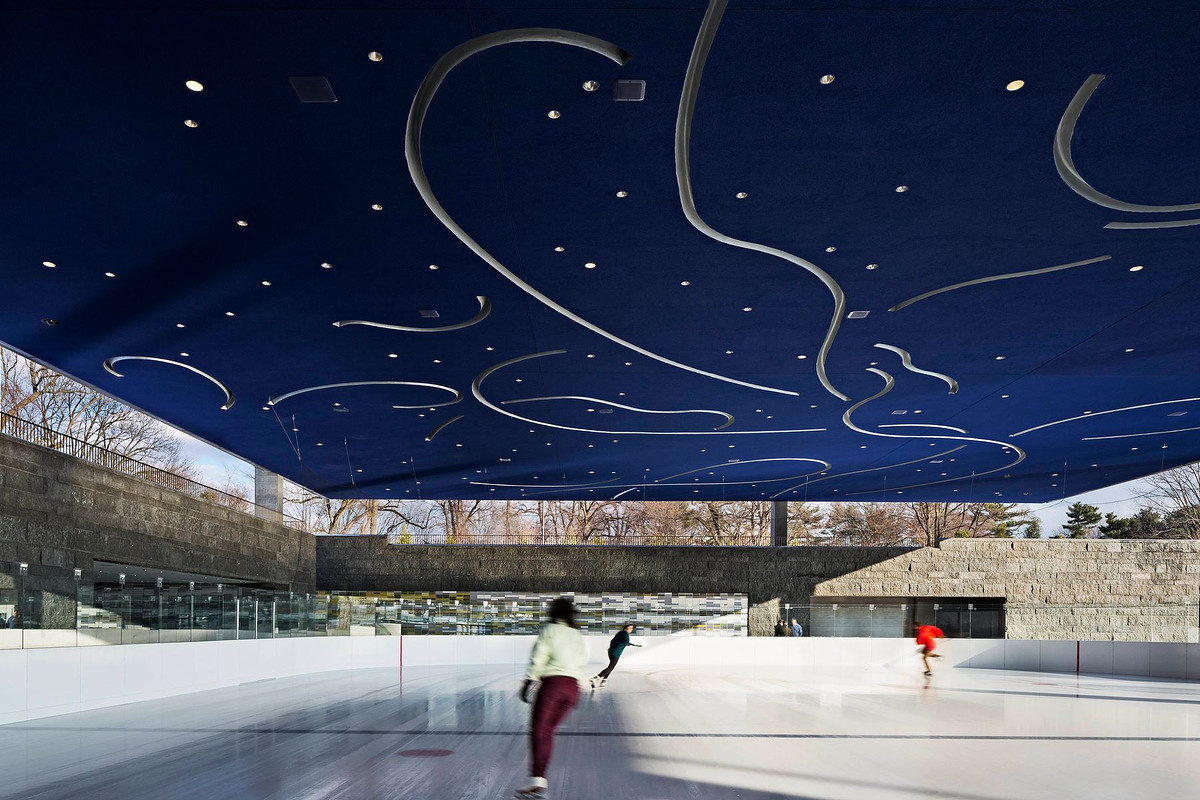 Slipped into twenty-six acres of restored parkland in Brooklyn’s Prospect Park, the brand-new year-round 75,000-square-foot skating facility is highly popular with residents. Clad in grey granite and partially underground, the building is well-hidden in the landscape yet doesn’t lack architectural character. A large canopy, delicately supported by several columns, features a deep blue underside dotted with light and silver-etched patterning. 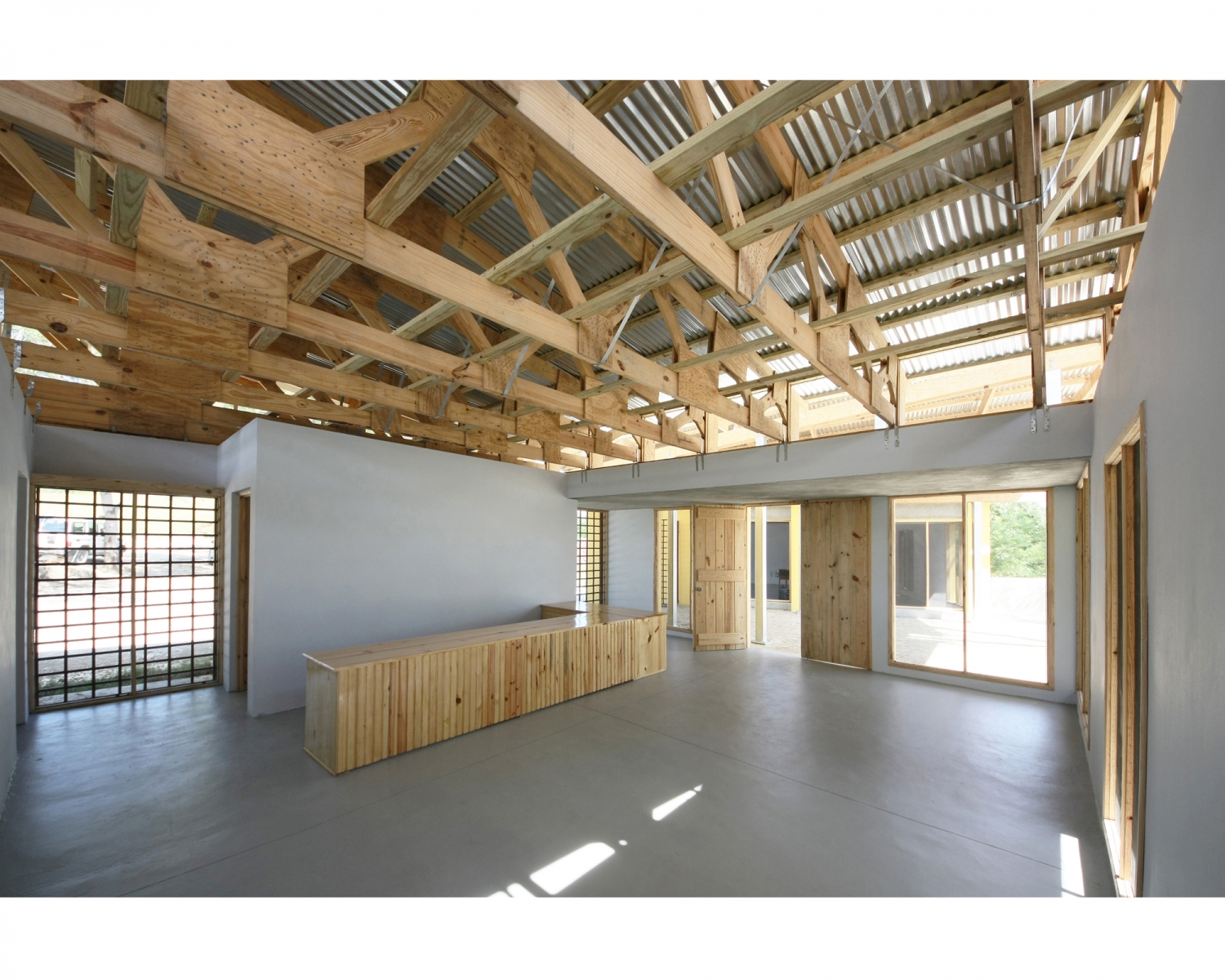 Consisting of three buildings located around a shaded courtyard, this community center is totally self-sufficient. Built with local materials and techniques, such as thatching, river stones, and cast concrete, it integrates a rainwater cistern, photovoltaic cells, passive ventilation, and other methods to operate off the grid. The hurricane-resistant buildings house social and administrative spaces that will later be joined by additional educational and civic buildings. 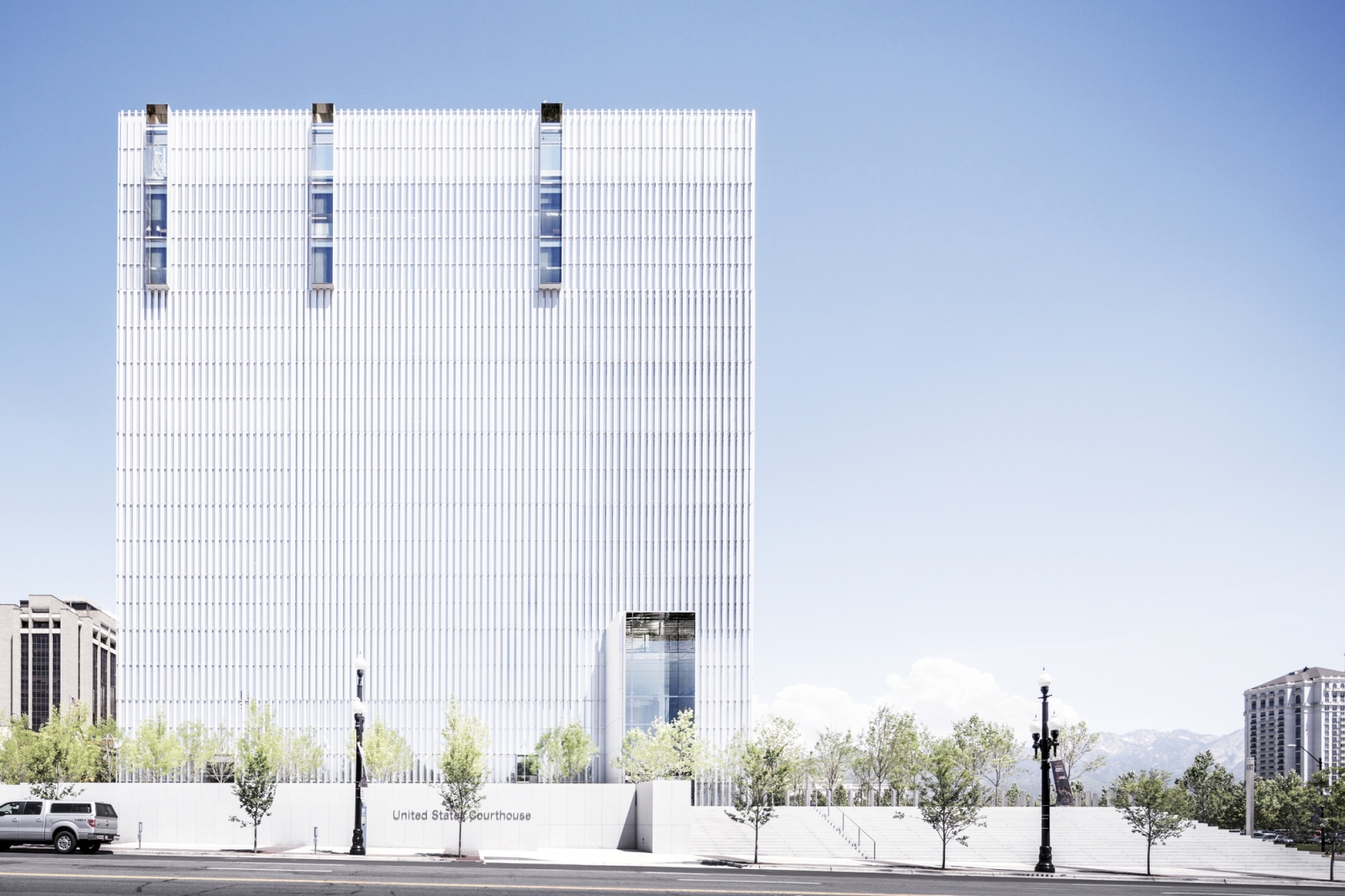 A monumental cube of glass and anodized aluminum, this 400,000-square-foot building hosts multiple judicial agencies and connects to a 1905 Classical Revival courthouse via an elevated garden. While the aluminum exterior modulates in response to solar conditions and security concerns, a single continuous sky-lit ten-story atrium runs through the building’s upper register. 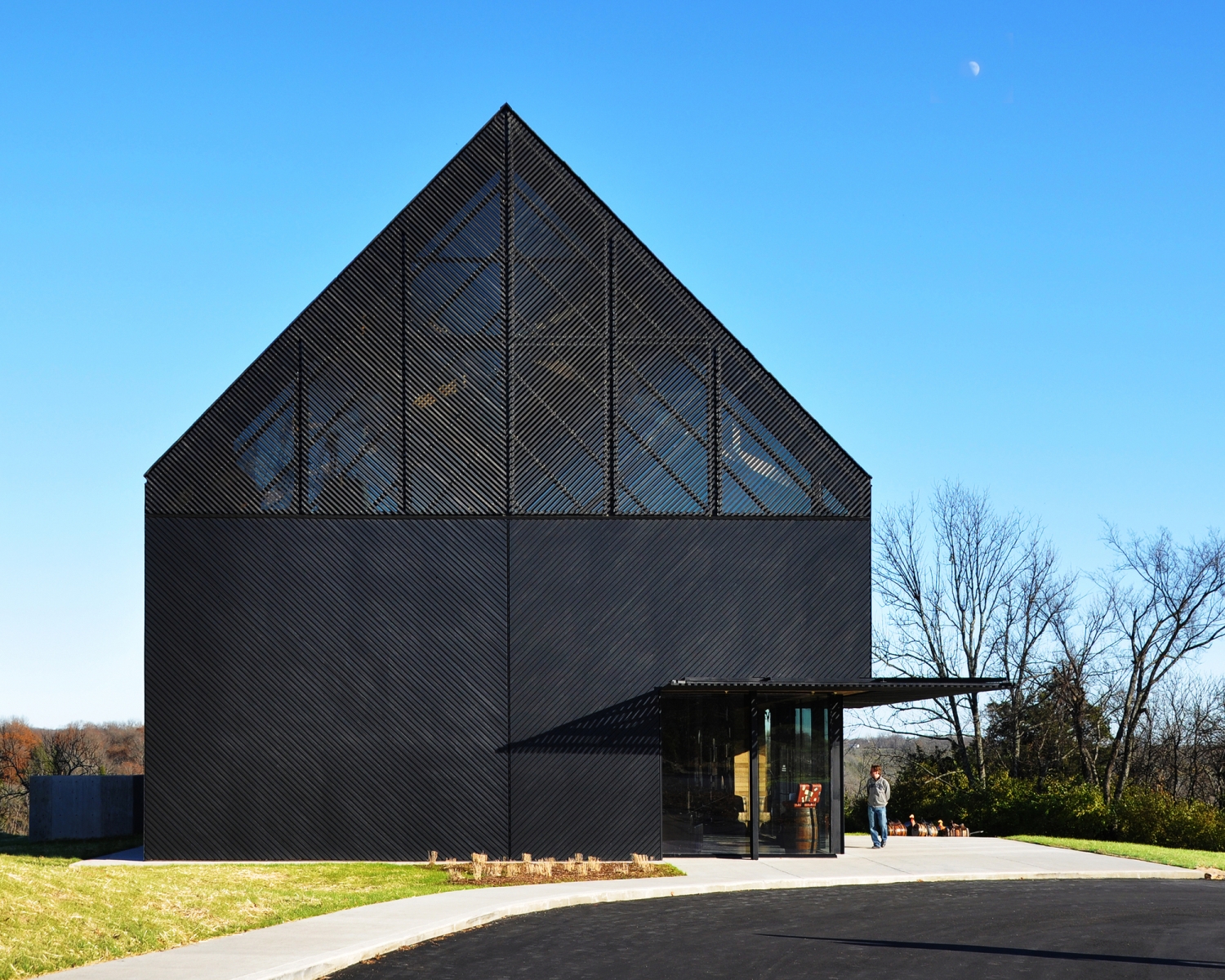 Housing exhibits, tasting rooms, and event spaces, this visitor center is part of a wider rebranding campaign by the bourbon makers Wild Turkey. Riffing off the simple barn typology, the structure is shaded by stained-wood panels, perhaps in a nod to the charred oak barrels used to make bourbon. The visitor’s experience culminates with a tasting room that overlooks the surrounding landscape.