A new digital exhibition mounted by New York’s Guggenheim Museum asks visitors to reconsider the meaning of architecture by placing bets on a speculative future. 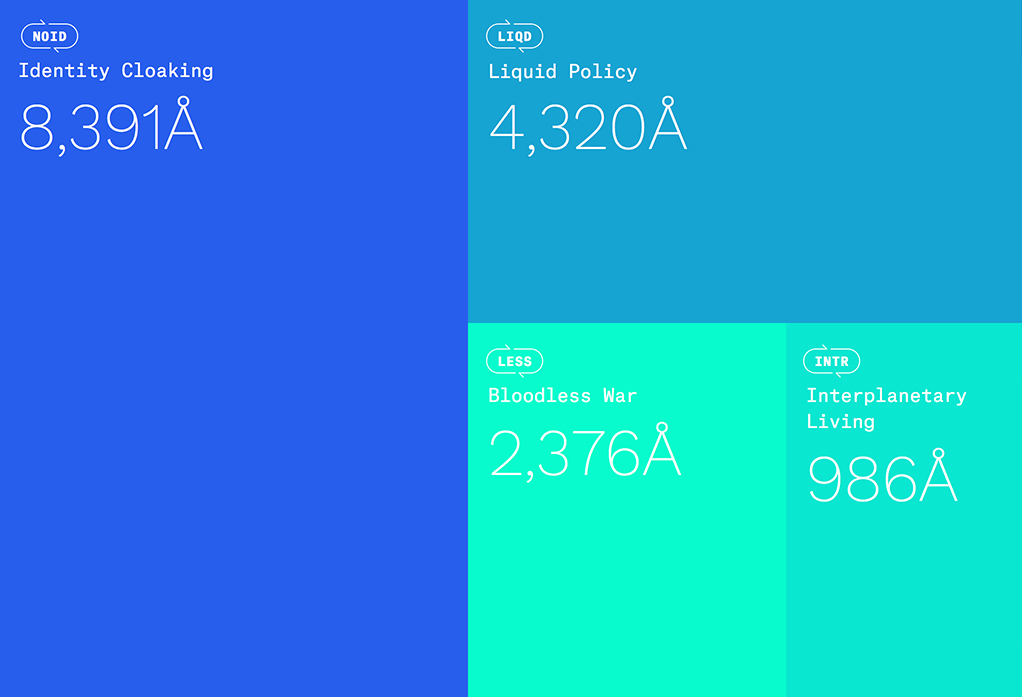 The Åzone Futures Market is a digital-first exhibition, having launched its online presence before its translation into physical space.

If you’ve ever read any theory on or about the Internet, you’ve probably heard of dematerialization, a concept that’s been thrown around a lot recently to describe everything from immaterial labor to virtual securities to art that exists only in a Web browser. As life has become less and less material, so too has our understanding of architecture, moving away from the design of physical environments toward the creation of digital spaces—interfaces, databases, and the platforms they support. Organized by the Solomon R. Guggenheim Museum, the Åzone Futures Market is an online exhibition that uses this new, symbolic definition of architecture to retool the way museums interface with technology, starting with the exhibition format itself.

Taking the form of a simulated financial marketplace, Åzone lets online investors bet pretend money on hypothetical tech-driven outcomes, called futures. For the project, the Guggenheim’s curator of architecture and digital initiatives, Troy Conrad Therrien, hired a trio of creatives to build a Web portal, trading engine, and API, and invited a who’s who of architects, theorists, technologists, and other assorted “influencers” to coauthor the futures and manage associated hedge funds. The idea is that eventually, with enough practice, participants will be better informed and able to “take a position on the future of a world increasingly shaped by emerging technologies,” according to the website. It’s a seductive proposal, given that informed positions are few and far between in the standard Internet bouillabaisse of partisan name-calling and ironic detachment.

The way the exchange works is similar to the real deal, with one major difference: There’s no actual money backing it. Trades are facilitated by a proprietary digital currency, a riff on the current art-world obsession with alternate monetary protocols like Bitcoin and blockchains. Ultimately, though, in order to buy or sell shares, users are required to provide a “hot tip,” or breaking news item, about a popular or experimental technology that can influence how stocks perform. As the data accumulates, it makes adjustments to the market in real time, in what amounts to a kind of behavioral analysis. (Additional features will be released in phases according to an unspecified timetable.) The goal is to crowdsource a dialogue about the ways in which technological innovation can affect planetary and geopolitical shifts such as global warming or government surveillance. But it’s unclear how helpful this corrective would be in practice, as it may contribute to a bubble of inflated expectations. Since most of the hype comes from industry and media sources, the exhibition’s tone tends to be one-sidedly positive, skewing the performance of the market as a whole. In principle, this isn’t a bad thing, offering, as it does, a crucial if unintended lesson on the perils of runaway optimism.

To concretize the analogy of the trading floor, a stock ticker at the bottom of the landing page circulates the names of the futures, lifted from the art world’s twin afflictions, big data and the Anthropocene: “Algorithmic Governance,” “Amateurized Anonymity,” “Moral Enhancement,” “Promiscuous Citizenship,” “Wasteless Ecology,” and so on. The most memorable because it is the most chilling, “Bloodless War,” reminds us that while human casualties may be eliminated or at least minimized down the line, statecraft will always be a zero-sum game. In the spirit of the attention economy, Åzone gamifies an existing paradigm by turning it into a playable module, transforming visitors into users in the process. By the same token, it promises to demystify and democratize an insider domain that has traditionally been off-limits to laypeople, privileging a utopian narrative of the Internet as somehow exempt from the unequal power dynamics that characterize the rest of life.

The exhibition idea is a seductive proposal, given that informed positions are few and far between in the standard Internet bouillabaisse of partisan name-calling and ironic detachment.
On these grounds, it’s easy to dismiss Åzone as yet another instance of art and tech’s mutual infatuation, a blissful repartee among incubators, Kickstarters, and hackathons that brings the Californian ideology to the doorstep of a major New York cultural institution. Lately, museums have been practically falling all over themselves to incorporate technology into their business models and cultural programming as a means of staying relevant at a time when their major competitors, we are told, are not other museums, but Netflix and Candy Crush Saga. For the most part, they’ve responded to the pressure as a start-up or digital media company would, with a flurry of activity that belies any cohesive vision or agenda. By tinkering with the exhibition architecture, Therrien hopes to go beyond what he sees as palliative measures, such as interactive displays and mobile apps for brick-and-mortar shows, social media campaigns to connect with the public, or the caravan of panels on post-Internet art.

Naturally, infrastructure as metaphor was the de facto theme of the opening, a daylong conclave that brought together the contributors under a single roof in what one panelist, Marvin Jordan of DIS magazine, called a kind of “fantasy football for accelerationists.” Instead of a “conference” or “symposium,” the event was billed in the zeitgeisty language of geopolitics as a “summit.” And although seating was provided, a couple of the presenters stood or paced, having fully internalized the logic of the TED Talk in, of all places, the solemn, respectably neglected interior of a museum theater. If this metaphoric construct is useful to a point, it’s also just vague enough to inspire the sort of passion that permits grown men to speak of architecture not as “capital value” but “performative effect,” and of architects not as “object makers” but “curators.” Yet as another speaker, Nora Nahid Khan of Rhizome, warned, communicating in cross-disciplinary metaphors is dangerous precisely for its tendency to “obfuscate” discipline-specific risk.

In the interest of specificity, then, it’s tempting to think that what we’re dealing with is a crisis of the architectural profession. In that case, the solution is clear: Dislodge the inefficiencies and obsolescences of the old system through successive rounds of technocratic troubleshooting, or disruption—that is, until we realize that the meaning of architecture varies depending on who’s doing the talking. “Architecting,” a verb that came up a lot at the summit, is also a term that no architect would ever use in relation to her practice but which has been picked up by the tech community as a handy concept for working through some of the more pressing structural and philosophical puzzles of information design. In this sense, Åzone can be seen as a symptom of a larger cultural morass: the radical failure of language to define the terms of the discourse at hand. Start-up culture may be a recent development, but its rhetorical pirouettes and salesy banter serve as a reminder that, in enterprise as in romance, delusion is nothing new.

Through no fault of its own, Åzone reflects the psychology of neoliberalism, in which the aspirational fantasy of immaterial labor can be sustained only through an elaborate live-action role-play in which one discipline adopts the trappings of another to offset the realities of its own material disenfranchisement. Of course, it remains to be seen whether the exhibition can answer any of the questions it raises, or whether it is the place of art to address such issues to begin with. In the meantime, play on. 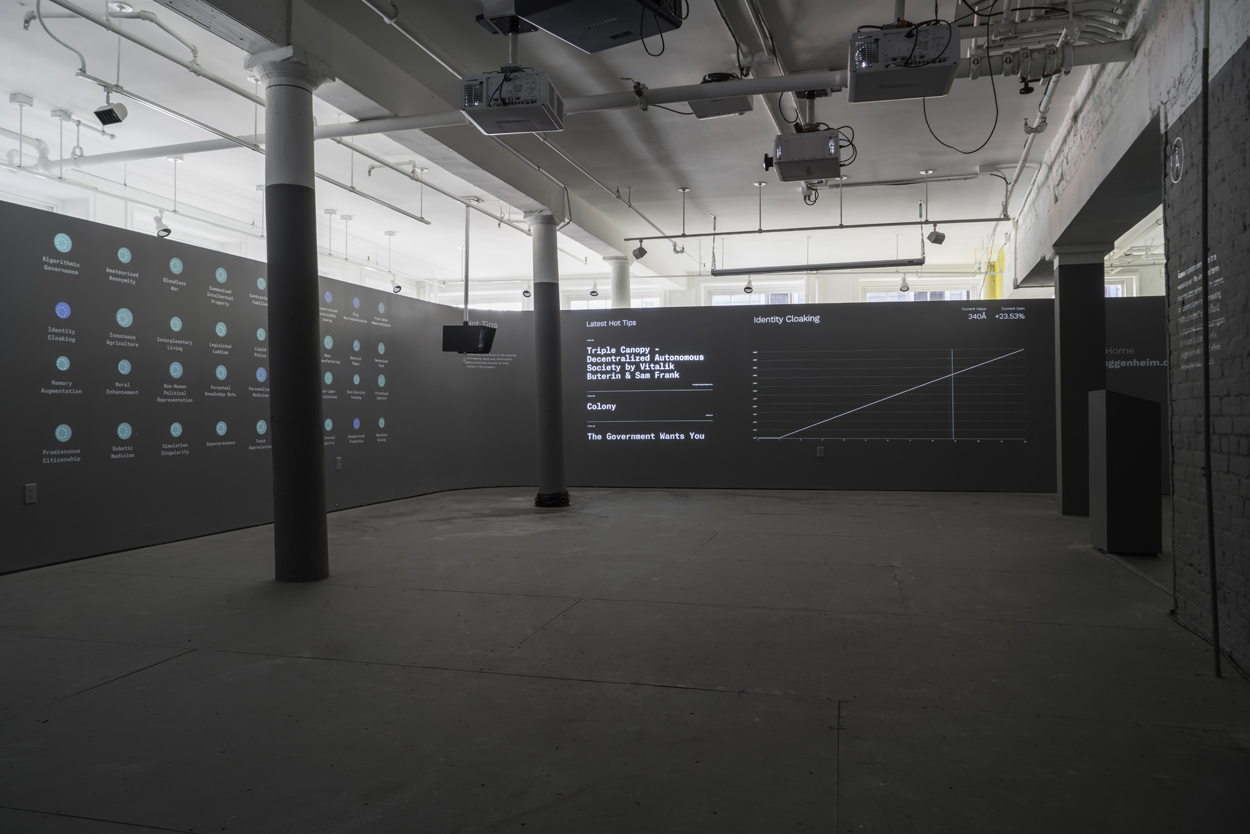 A temporary installation in late October (above) projected a Web browser cued to the Åzone site (below) onto the walls of an otherwise empty space. 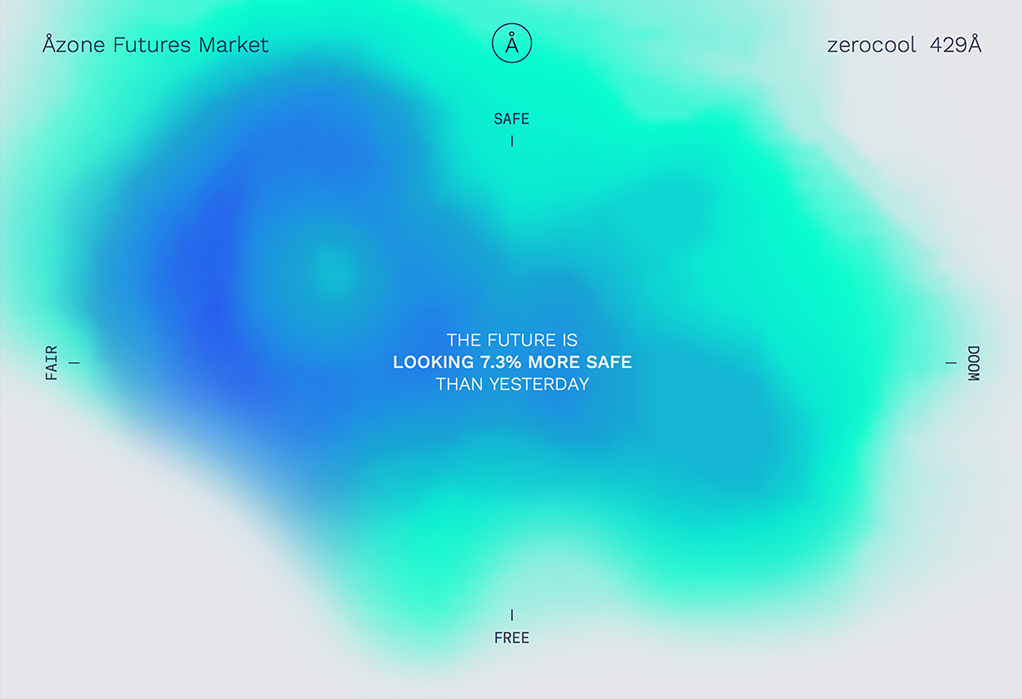