An ongoing show at the City College of New York casts the architect’s unfinished masterpiece in a new light.

References to Antoni Gaudí’s La Sagrada Família as “unfinished” are usually of a terminal nature. Continued construction efforts, despite constituting the immense physical bulk of the structure, are at best a coda in most accounts—until now. City College of New York’s Sagrada Família—Gaudí’s Unfinished Masterpiece takes a square look at the La Sagrada Família’s contemporary life, offering a vision of progress both surprising to the observer accustomed to the idea of the church—technically a basilica—as a permanent fragment and likely distressing to those, from Le Corbusier to Aalto, to Gropius and others, who cherished that state as ideal.

When Dickens died before finishing his final work, The Mystery of Edwin Drood, he, like Gaudí, left outlines of the remainder of the plot. The author, however, indicated his story’s villain. Detractors of plans to finally bring the structure to completion fear that newer construction will, in grafting derivative work by other architects onto the church’s original bones, reveal a similar lack of foresight.

The backdrop is likely familiar. La Sagrada Família, the majestic and monomaniacal obsession of Gaudí’s life, consuming 41 of his 48 professional years, was the architect’s stylistic masterpiece, eventual home, and final tomb. It soared above Barcelona and any simple classifications of Art Nouveau or Modernisme, into a realm of the absolutely singular architectural vision. Church construction—never the most rapid of processes—advanced particularly slowly amid the difficulties of war, depression, and church-state jockeying in Catalonia, and left only a portion of one of three facades, the Nativity facade, completed by Gaudí’s death in 1926. 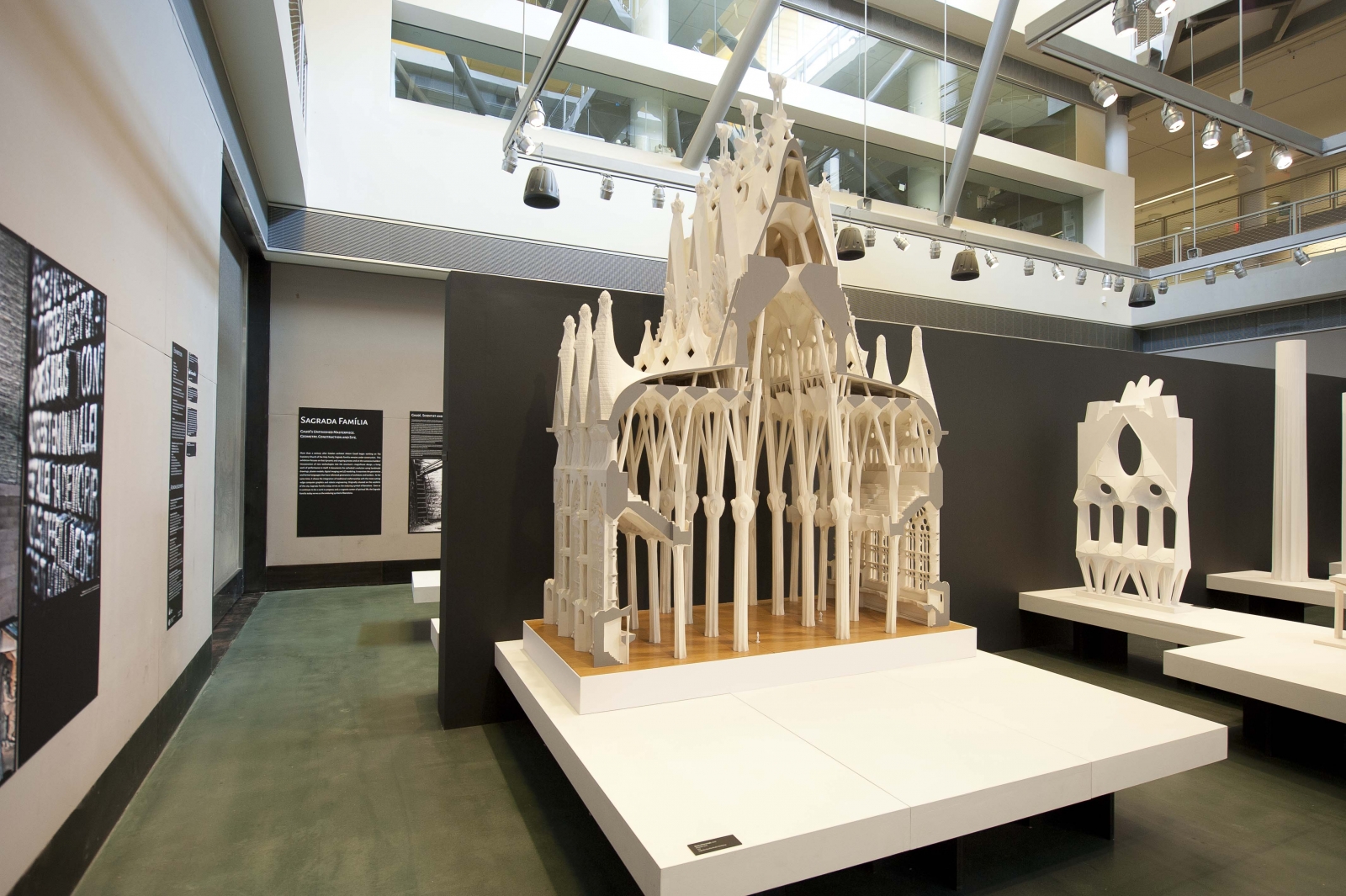 The exhibit focuses on structural elements which its organizers argue offer the strongest link possible between Gaudí’s original design and subsequent work.

This completed portion was a structural marvel and daring aesthetic panoply combining an allusive surface riot of barnacular look with ornament featuring everything from an allegory of the Mountain of Montserrat and of Saint Joseph to the replacement Apostle Thaddeus (there seemed to have been some falling out with Judas). Arrested at a relatively early point in its construction, the church nevertheless became an international icon of architecture and the city of Barcelona. George Orwell wished that Spanish Civil War anarchists had torn the facade down—they certainly were successful in complicating its future, ransacking Gaudí’s workshop and destroying many plans and models. Some remained in workable state—plans, though, were only articulated in partial detail.

Construction eventually restarted and proceeded in slow stretches, before picking up substantially in the 1990s, when advances in digital modeling gave project architects rapid and flexible parametric tools to riff off Gaudí’s original work. This has scandalized some critics, but not George Ranalli, dean of the Bernard and Anne Spitzer School of Architecture at CCNY, who assembled the exhibit. He notes in conversation that, when it came to La Sagrada Família, “One of the most important aspects for me as an architect and engineer was the collaboration across time.” This work, Ranalli acknowledges, isn’t completely Gaudí’s, but bears both his mark and that of his successors.

The exhibit begins with a close examination of the evolution of Gaudí’s design innovations, including those implemented at La Sagrada Família and their recent-day replications. “Hyperbolic Vaults,” “Catenary Arches,” and “Geometrical Assemblies” are the practically minded titles you’ll find in the show, one devoted to explicating Gaudí’s “bequest of a structural scheme based on the catenary curve and a compositional codex using ruled surfaces” as a primer for the work’s completion. 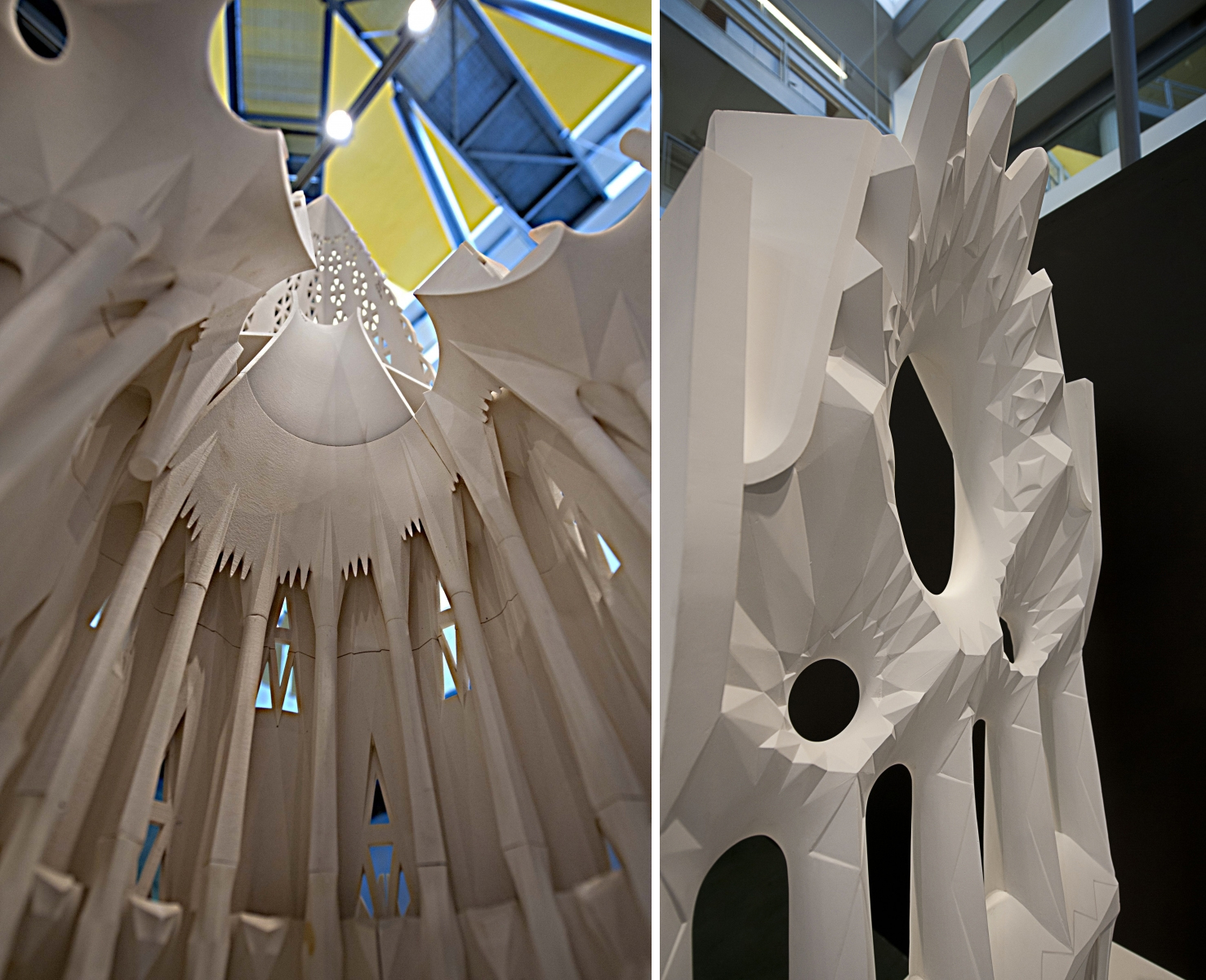 Visitors are offered a close and fascinating look at the twisting and branching columns that freed the exterior walls from many structural requirements, as well as the assortment of hyperboloids that both dapple and form columns, cupolas, pinnacles, and vaults. A “half-hyperboloid is the ideal shape for a bell,” the exhibit notes of the “ocean” of non-linear shapes that build to, in Salvador Dalí’s words, the “erogenous shapes that bristle like a sea urchin.” Twenty-six models positioned above and below offer a close look at capitals, naves, roofs, pinnacles, and a variety of other features—some derived directly from Gaudí proportions, others modeled to serve new purposes in the construction. The exhibit makes ample use of remaining workshop fragments and contextualizes completed Gaudí work not merely as complete but as templates for future work.

Most of the exhibit is focused on nuts and bolts, or bones and branches, as it were, and advances a frank advocacy of finishing the church. Ranalli has little patience for those hoping to see La Sagrada Família remain a shell, arguing that they both “go against Gaudí’s own wishes” and represent an actively ahistorical view of architecture as a solitary auteur’s pursuit. “The idea that we believe in some kind of sacred artistry about architecture—that a building is something that only one person works on—is absurd.” He notes Bramante’s dome on the Duomo in Florence, or Michelangelo’s Laurentian Library interior as natural developments over time. He acknowledges that La Sagrada Família has and is changing, but stressed the continuity made possible with technology’s aid and those plans remaining.

The completion of La Sagrada Família, he argues, offers the chance to fill the urban space as Gaudí intended—to offer the surrounding square a full building, instead of an assortment of bare facades. He laments that, in the architectural profession, “we tend to work in opposition to the environment, to think about the dissonance rather than the collaboration.” 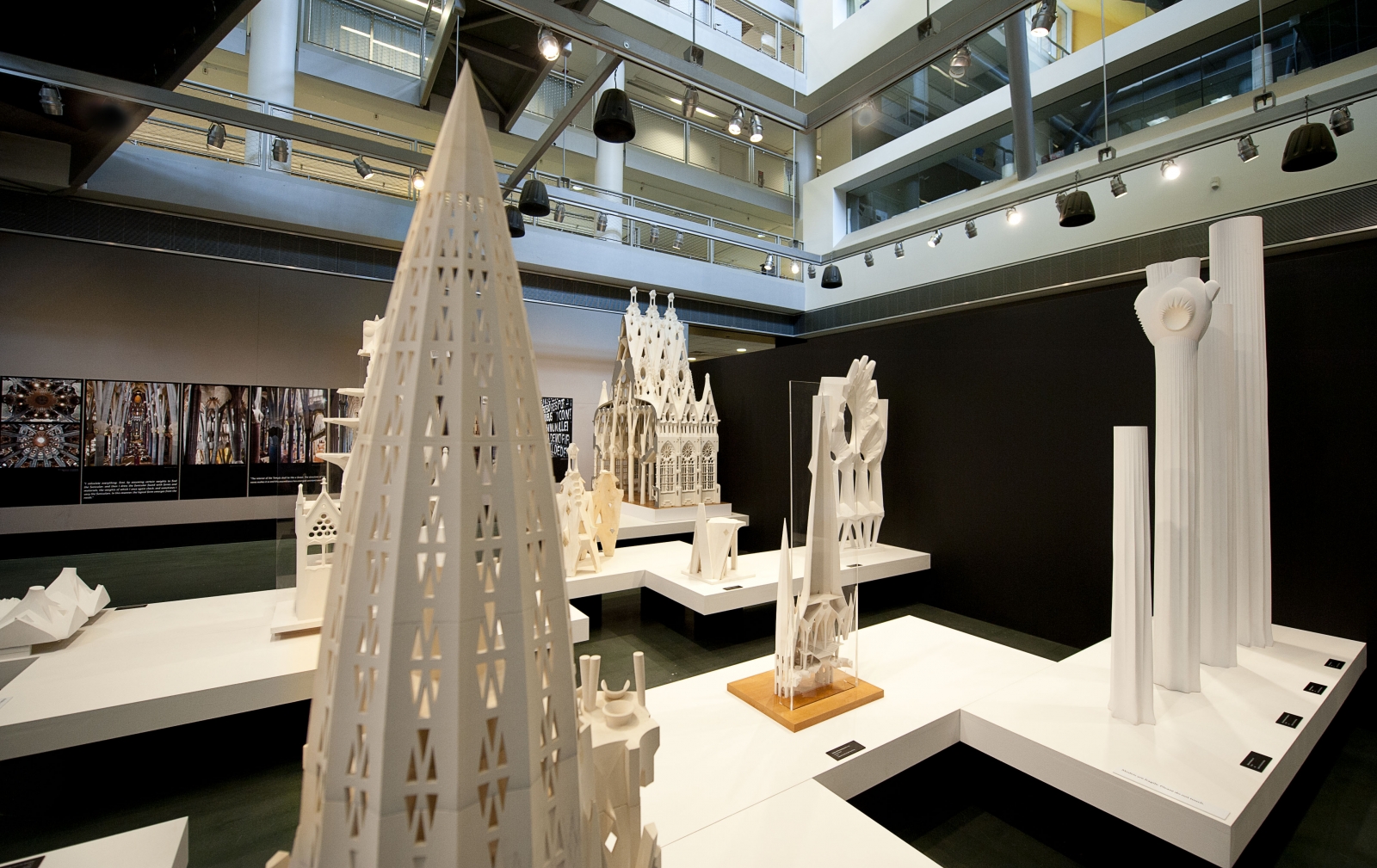 Sagrada Família—Gaudí’s Unfinished Masterpiece is open through May 8, 2015.

There’s little question that subsequent ornamental work is a pale imitation of the Gaudí original. British critic Rowan Moore offered a damning assessment of the more recent Passion Facade for featuring “sculptures of cartoonish anguish by artist Josep María Subirachs, the awfulness of which is beyond description.” Such elements don’t receive much attention in the CCNY exhibit, whose focus on structural elements offers the strongest link possible between Gaudí’s original design and subsequent work—and likely the best argument for continued work.

It’s unclear whether this will settle the debate, but it offers a fresh angle for its consideration, from details small or large. The exhibit may not convince you of its argument, but it’s well worth a look in Manhattan if Barcelona isn’t on your itinerary in these next few months.

Anthony Paletta is a writer living in Brooklyn. He writes the “Spaces” column for the Wall Street Journal and has written otherwise for The Daily Beast, The Awl, Bookforum, and The Millions on urban policy, cinema, historic preservation, and literature, and Metropolis on Long Island Modernism, Boston city planning, the preservation of Brutalism, and a variety of other topics.