Despite its flaws, the documentary Citizen Jane: Battle for the City is an entertaining call to action, and a reminder that when motivated individuals come together, a small corner of their world can change.

Even though Citizen Jane: Battle for the City details battles fought over 50 years ago, the film feels as relevant as ever, as people in cities across the globe struggle to adapt to large-scale, seemingly out-of-control development. Directed by Matt Tyrnauer, the documentary tells the story of two urban titans, Jane Jacobs and Robert Moses, and, ultimately, New York City itself. While the film does an excellent job of using expert interviews and archival footage to depict the tensions between old and new, class and commerce, and utility and sentiment (it’s a fascinating ride), Citizen Jane falters at times, portraying the complex figures of Jacobs and Moses as stock characters in an overly simplified struggle between good and evil.

From the start it’s almost too easy to root for Jacobs: She was a journalist who began her career writing about New York’s working-class neighborhoods, such as the Garment and Diamond districts. No detail was too small for her consideration; for Cue magazine she wrote about manhole covers. She thought that sidewalks and streets should be teeming with life to allow for human connection—the more people were out and about, or watching from their windows, Jacobs felt, the safer the city would be.

In contrast, Moses, the famous and often reviled New York City planner, emerged from the idealist progressive movement of the 1930s. During the post-war years he was given almost complete power to overhaul New York’s oldest, deteriorating neighborhoods. At the time, the vestiges of pre-war tenement life were not considered especially valuable, let alone attractive. His Modernist vision required widespread demolition to make way for new developments: namely, cold-feeling housing projects and massive highways.

A resident of Greenwich Village, Jacobs became an activist when she learned about Moses’s plan to extend Fifth Avenue through Washington Square Park. Saddened and outraged, she wrote to the mayor and rallied various members of the community, particularly housewives—whom Moses condescendingly described as “a bunch of mothers.” But Jacobs had the backing of the likes of Susan Sontag and Eleanor Roosevelt, who noted that, “Good tradition has to be preserved.” Jacobs won this first battle, and the demolition plan was eventually scrapped. The final showdown between Jacobs and Moses, as portrayed in the film, is over the proposal for the Lower Manhattan Expressway. If  successful, this plan would have destroyed many historic 19th-century buildings and Soho as we know it. Jacobs prevailed, and by 1970 their war was over.

The viewer of Citizen Jane benefits from a trove of archival footage of Jacobs and Moses, both big personalities and well-matched adversaries. We hear them telling the tale in their own words, which springs the film to life. If only the filmmakers had stuck with this technique. Instead, passages from Jacobs’s  landmark book The Death and Life of American Cities, published in 1961, are read by Marisa Tomei; Vincent D’Onofrio responds as Moses. These celebrity voiceovers are an unnecessary affectation that offer little to viewers besides reminding them of so many movie-making cliches. After hearing the actual voices of Jacobs and Moses, both hardscrabble and crackling with energy, this overly commercial technique—rampant in documentaries today— falls especially flat.

Moreover, while the documentary presents Jane in a relatively nuanced way, she is undoubtedly presented as our protagonist, which makes Moses our unequivocal villain. The orchestral score by Jane Antonia Cornish is particularly effective in this regard, and well-woven throughout the movie. Melancholic strings often play as we see bulldozers clearing swaths of the slums away. In reality, Moses’s legacy is a more a mixed bag. His major projects included Lincoln Center, Shea Stadium, and more than two million acres of parks across the state—all of which contributed positively to the city in one way or another (even if they were established at the expense of powerless citizens). It would have been interesting to learn more about the successful aspects of Moses’s public works in the film, but this currently unfashionable notion wasn’t touched upon.

Nevertheless, the film does an excellent job of incorporating expert interviews. Throughout the film Tyrnauer presents a who’s who of architects and thought leaders— Robert A.M. Stern, Michael Sorkin, Sanford Ikeda, Geeta Mehta, and Charles Correa, among others—who provide historical context for viewers who may be unfamiliar with Jacobs and Moses, or the field of urbanism in general. Their enthusiasm is palpable; the information they present to the audience is never too dry or academic. It’s clear that they relish telling this story, one which remains as relevant as ever.

At one point Jacobs tells us that “it’s wicked to be a victim,” and this is a powerful message well illuminated by the filmmakers. Ordinary citizens both then and now have the power to shape their communities. Despite its flaws, Citizen Jane: Battle for the City is an entertaining call to action, and a reminder that when motivated individuals come together, a small corner of their world can change for the better. 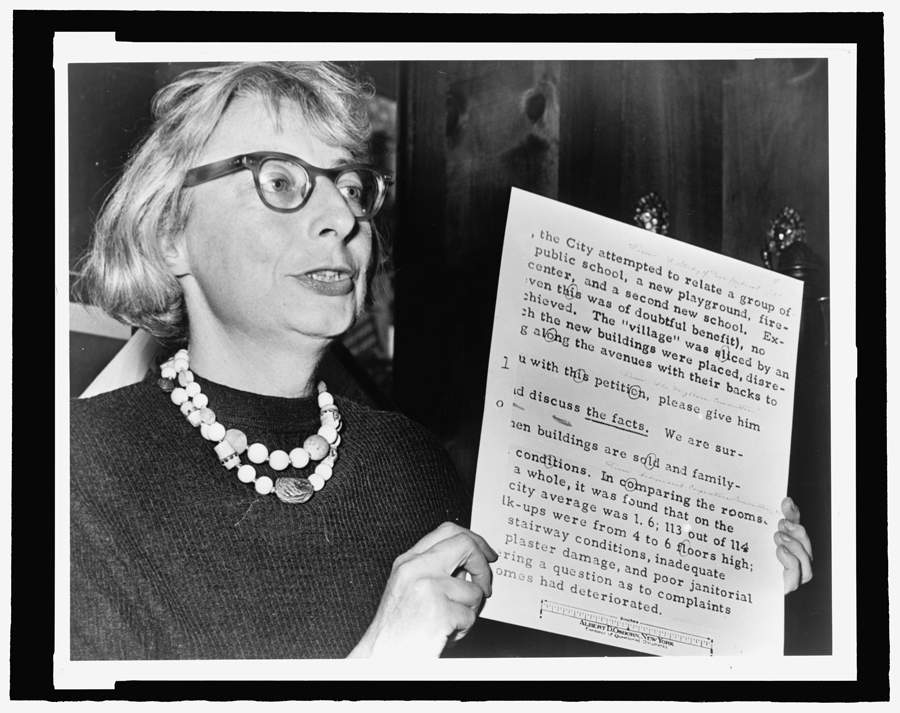 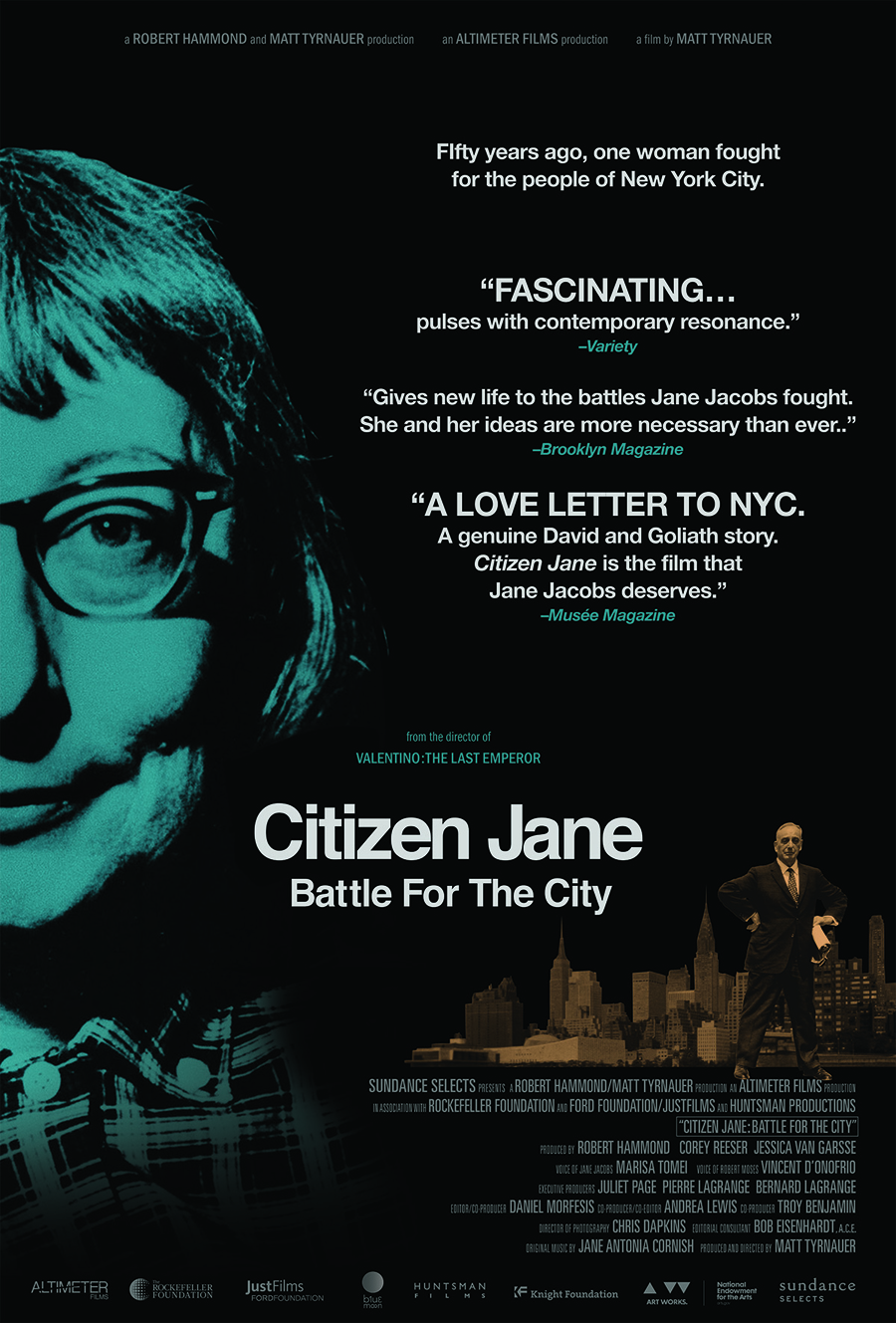