David Adjaye on the National Museum of African American History

David Adjaye tells us why The National Museum of African American History and Culture, opening in September, challenged him like never before. 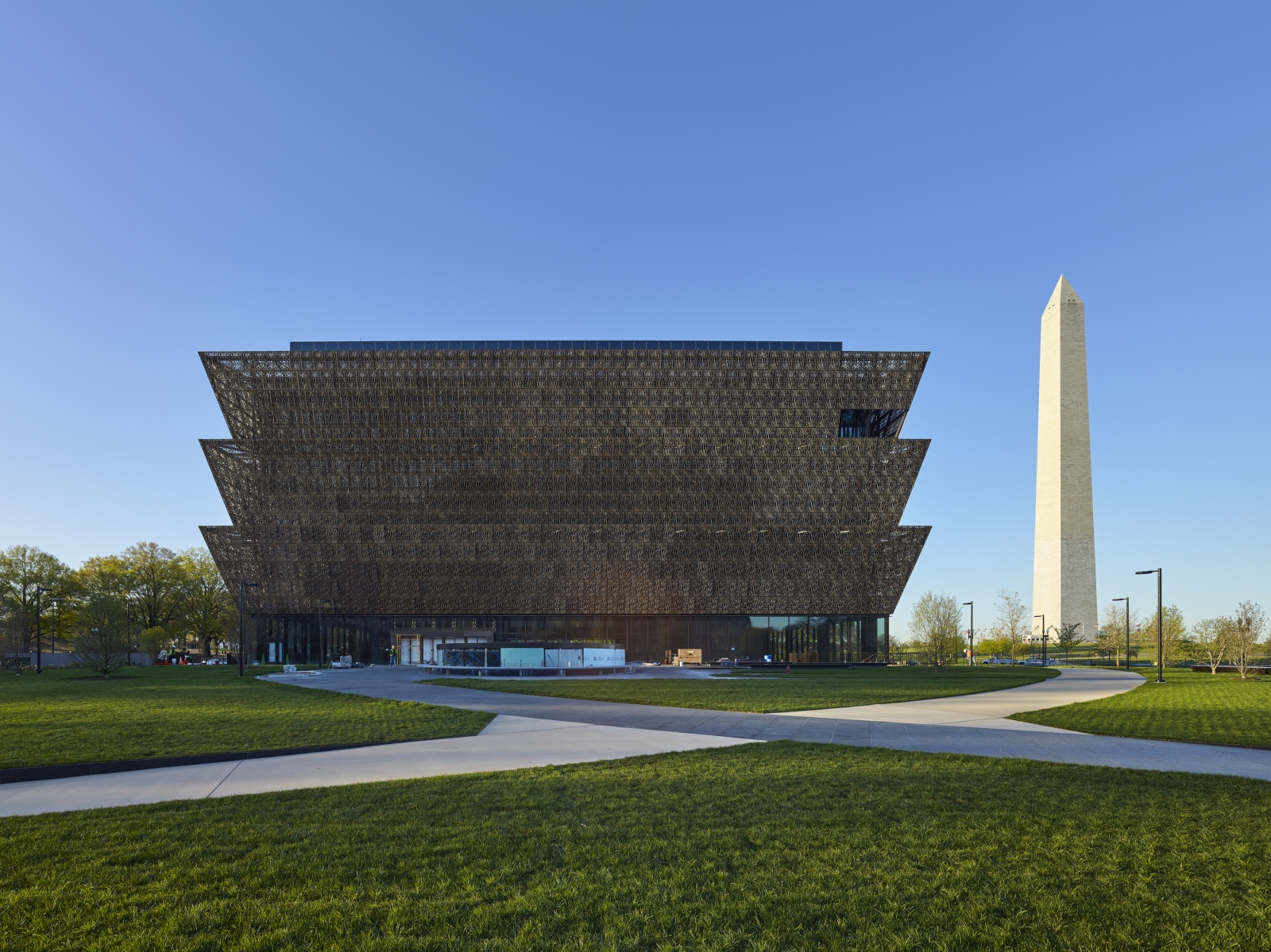 The National Museum of African American History and Culture (NMAAHC), which will occupy the last available site on the National Mall, was a challenge for British architect David Adjaye, who is known for designing buildings that are highly referential to their surroundings.

It’s rare for an architect to have the opportunity to design a building in which symbolism and form are as important as function, if not more so. But this was the task given to David Adjaye when he won the commission to design the National Museum of African American History and Culture (NMAAHC), which, when it opens in September, will be the final Smithsonian institution to take its place on the National Mall in Washington, D.C. Adjaye, whose work is marked for its extreme sensitivity to context, found himself challenged in ways he had never been before. On the occasion of the completion of Adjaye’s Eugene McDermott Award residency at MIT, Metropolis editor Vanessa Quirk spoke with the architect about the new institution, its symbolic significance, and the blurry boundary between monument and museum.

Vanessa Quirk: At what point does a museum become a monument?

David Adjaye: I’m not sure museums really are monuments or should be monuments, as a first principle. Museums should be palaces of edification—in a way, they’re palaces that democratize visual and cultural patrimony. That’s really their primary job. Let’s look at the National Museum of African American History and Culture. The Mall is really about palaces of culture—and then, you have the rambling monument grounds, the anchor of which is the Washington Monument.

What [Washington, D.C., planner Pierre-Charles] L’Enfant didn’t describe was what happens when you get to the threshold between the two [the palace and the monument]. That threshold— wherever it is—becomes an interesting point of discussion. This building was neither a monument nor a palace, but somewhere between. There’s a way in which it’s referring to the urban grid and the placement of the palaces [the other museums that surround the Mall]. But because it’s a building that’s seen in the round, the objectlike quality of the form became important. It wasn’t just composition. It became something that had a strong silhouette but also had a relationship, in a way, to the most dominant monument around—Washington’s obelisk. We actually were deferential to it by making the angles of our splayed skin system the same angle as the [obelisk’s] pyramid.

That’s the kind of moment when there’s a contextual, or urbanistic, condition that’s important. I think when a museum starts off just wanting to be a monument, there’s a lot of problems [laughs].

Was the opportunity to make a sculptural building freeing for you, since you usually are so concerned about context?

It was, actually, really difficult [laughs]. Because there were none of the usual references that I am used to in an urban context, the kind of relationships that I make and I talk about in my work. So, I had to look for a whole new strategy.

In the end, it forced a debate about the representation of the museum in the wider context of the community and the nation. That is a really profound question to be involved in as an architect. It’s one of those questions you don’t even think about. So, suddenly, when that question is part of the discussion, you realize it’s more than just your architectural style—and that’s great. It’s about creating meaning and associations and joining of stories. You find yourself becoming the final ingredient of a meal. It really stretched a whole side of me that I hadn’t exercised before, and I continue to draw from that very much.

Was it a priority for you that the museum also be a memorial?

Implicit in the notion of a national museum of African-American history and culture there is this dialectic. It is both a celebration and a memorial, while still being a museum. It’s actually a triptych. But the ideal of a monument is also in there implicitly because, one, it is the last museum on the Washington Mall and, two, it’s also the museum that has struggled the most to justify its existence.

So, it’s a kind of monumental achievement, in an extraordinary way. Two hundred years of asking. That’s not a joke.

How does that memorializing aspect manifest itself physically in the museum?

For me, it was important that that did not take any singular aspect of the narrative. Because when you’re doing that, you have this very “hot potato” moment—what do you privilege as the thing that people should remember [most about the museum]? In the interview [for the commission], that was a very, very powerful discussion with the committee. I talked about the notion of a building that should speak to the entire journey. But also to acknowledge that this journey is a kind of celebration, of rising against adverse conditions and becoming part of a great nation.

A lot of people fall afoul of taking a cliché position about slavery as a defining moment of the African-American community’s achievements. And actually, it is a traumatic moment, but alongside the many traumatic moments are also many triumphs. I just refer back to a classical tradition that memorializes stories. 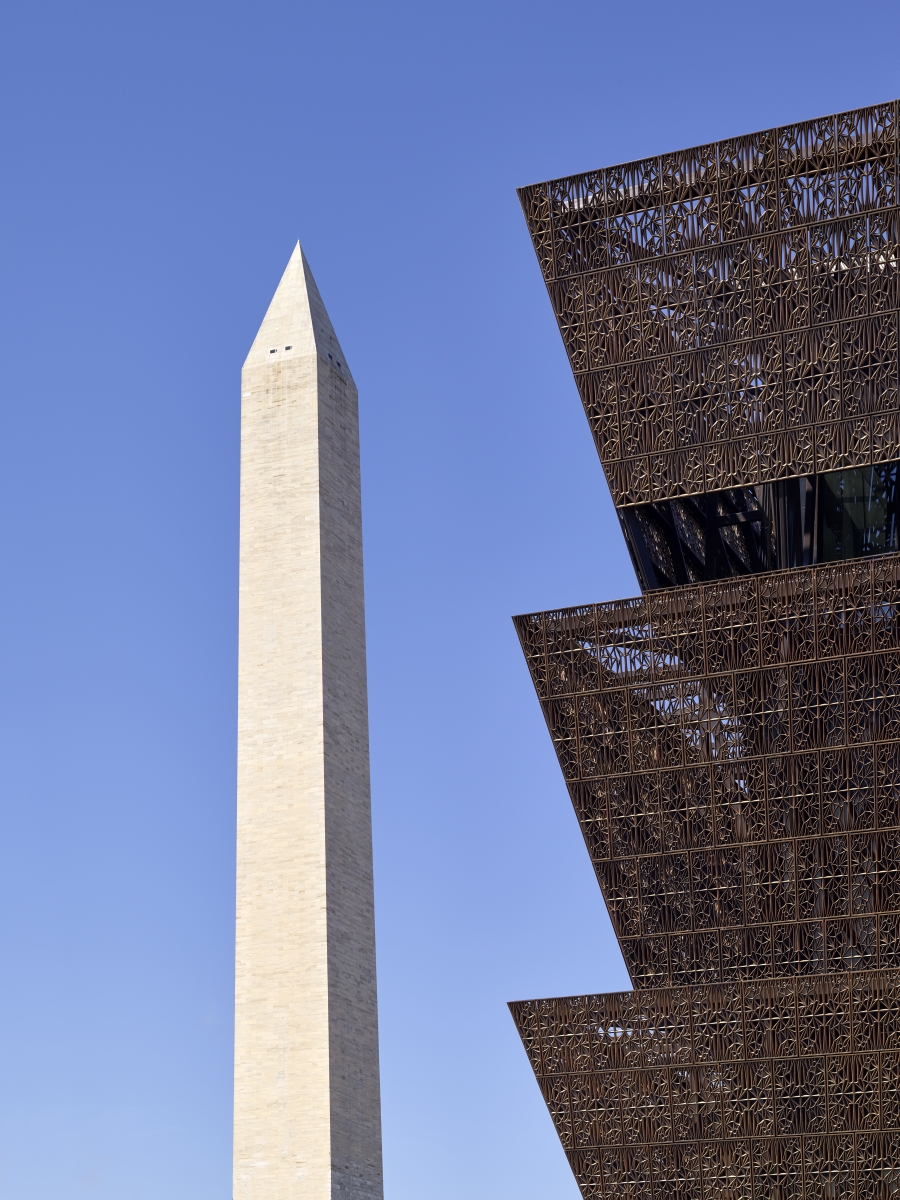 With no dense urban context to draw from, Adjaye eventually found inspiration in the classical vernacular. Indeed, the angle of the building’s facade matches that of the Washington Monument’s pyramid.

If we look at the memorializing tendencies of West Africa, which is where the historically predominant [African- American] community comes from, they were also using caryatids and geometries. Because the classical language is linked both in its Southern and Northern expression. That form had a very beautiful relationship to Washington’s monuments because the Yoruba were fascinated with the relationship with Egypt. And it’s interesting that, in the end, America was also fascinated with Egypt somehow. Because there it is with the first president being memorialized by an Egyptian obelisk.

These geometries also are celebratory crowns. There’s something very beautiful about the notion of the crown, which is carried through in the Yoruba community—especially among women—as a headdress. There seemed to be very beautiful connections to that in that the geometry of the crown wasn’t just about a ring on the head. It was a kind of upward geometry. So, it had the ziggurat—uplifted—connotation.

Then, finally and fundamentally, it symbolized the tripod-type nature of the brief. There are three fundamentals that organize the building. It’s history, the present, and the future. In a way, this triple crown of these three parts seems to literally fit the body of the project.

And perhaps give you a framework within which you could be more creative, despite the lack of urban context?

Correct. When a narrative suddenly can be useful [laughs].

Now that you’ve just designed your largest yet, what do you think is the future of the museum?

We still are in the ether of the museum as a 19th-century palace of wonder. It’s a place where people go to discover things they’ve never seen before. Or, in the 20th century, it becomes a place where rarefied and extraordinarily expensive things are held that you would not be able to see, but can see. But they’re all the same kind of thing.

I’m proposing there’s a new generation of museums that are about uncovering scholarly narrative, uncovering citizen narrative. They’re not about the discovery of the world anymore. That’s gone. More people feel like they’re global citizens in nations. With that notion, the narrative of peoples becomes very important. As we urbanize, the notion of the identity of people becomes mutated into the notion of nation-states. And that is fine. That’s a project of the 20th century.

But, in the 21st century, there are generations coming up who can understand the nation-state, but also understand the global, who also want to know the narrative of their roots. That permeates a series of new museums, of storytelling.

It’s a kind of monumental achievement, in an extraordinary way. Two hundred years of asking. That’s not a joke.

I think it’s no irony that places like the Jewish Museum exist. They are, in a way, permeating the beginnings of that question. How do people come into being, and how do we form identities within other groups? Are those stories important? Yes, they are. Because they tell us about how complex groups come together to make metropolitan conditions. The citizens and the people who are administering those places need to know what the stories are. Because if you don’t, you’re flying blind. It’s already blind enough because it’s complicated. But I think that the notion of narratives helps negotiate difference and helps create tolerance and helps create more stable civic environments. Ignorance of the other is the greatest fallout from the nation-state project. You create an artifice where everybody’s supposed to forget their past.

Right. How does that affect the design process? When you’re creating a building that’s meant to house a story or narrative, how does that figure into your design?

There are obviously different ways, but this notion of discovering the narrative, and of the narrative becoming the context of the project, is eventually what I’m really proposing as a strategy for narrative museums. What is the narrative construction of a narrative museum? How does the story inform you rather than the bricks and mortar of the building? How do you create form from those notes? The architect is the very person who uses philosophical texts to create space. 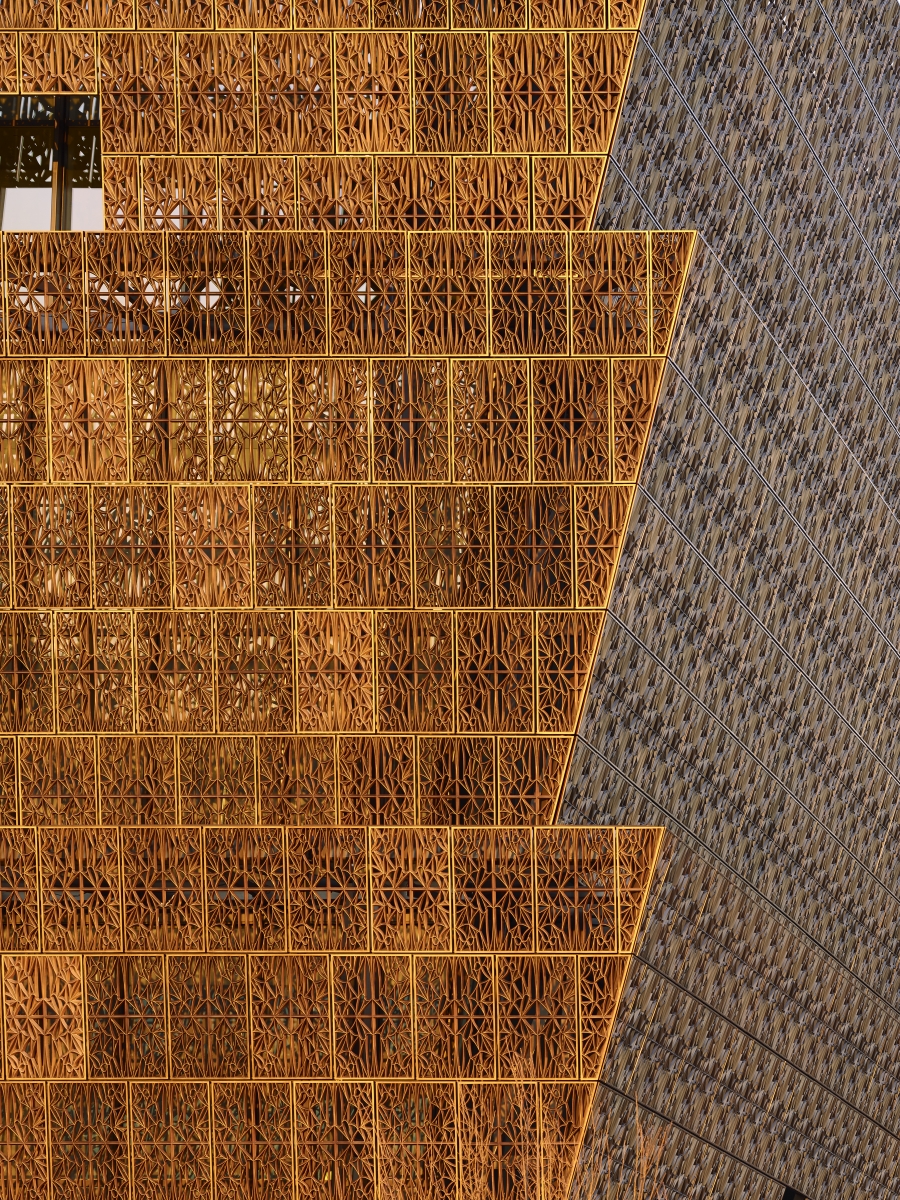 The facade system is an aluminum substrate with bronze finish inspired by the work of African-American ironworkers, who contributed greatly to the architecture of the American South. 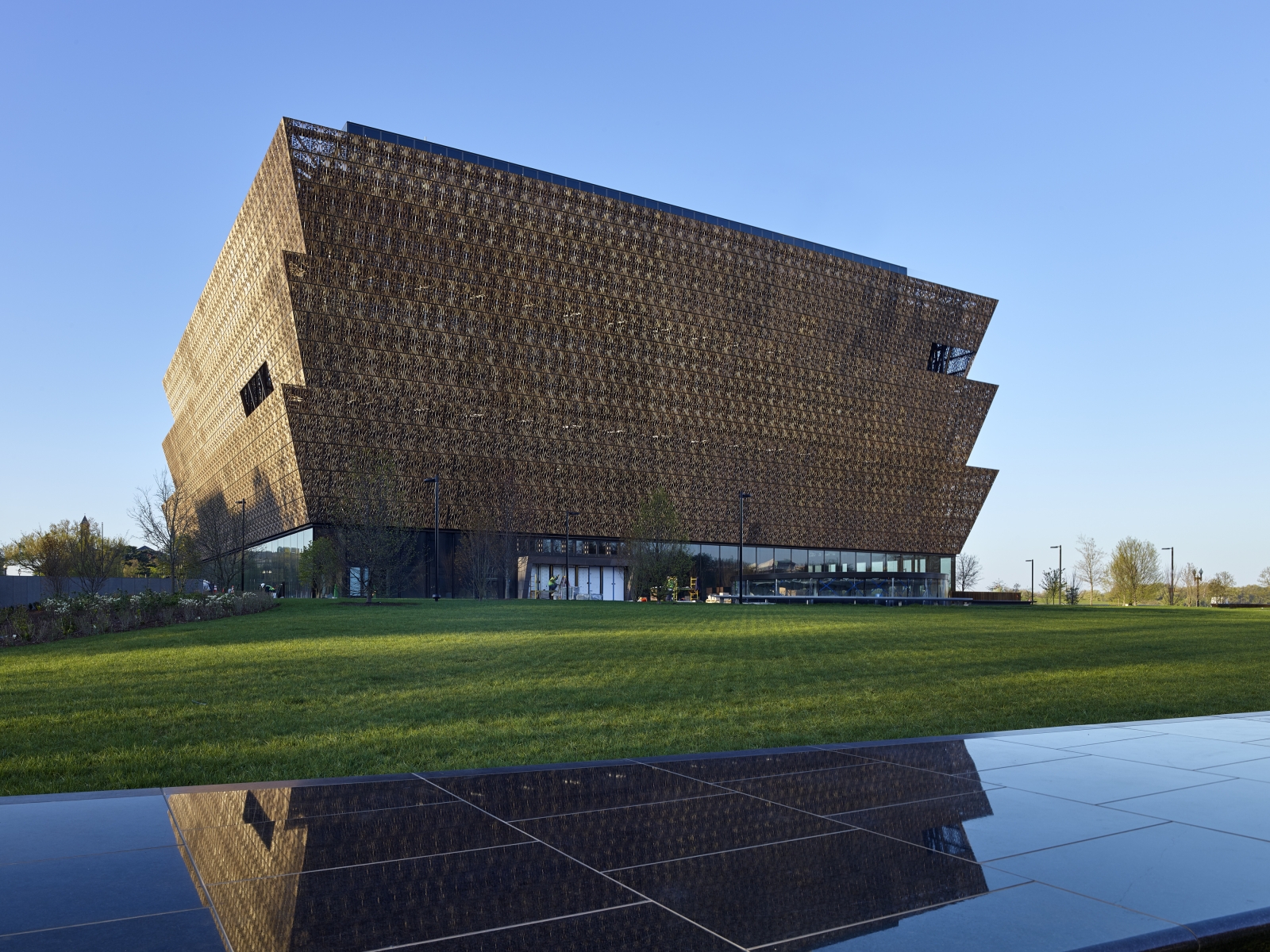 The three tiers of the building organize the spatial experience of the museum into past, present, and future. 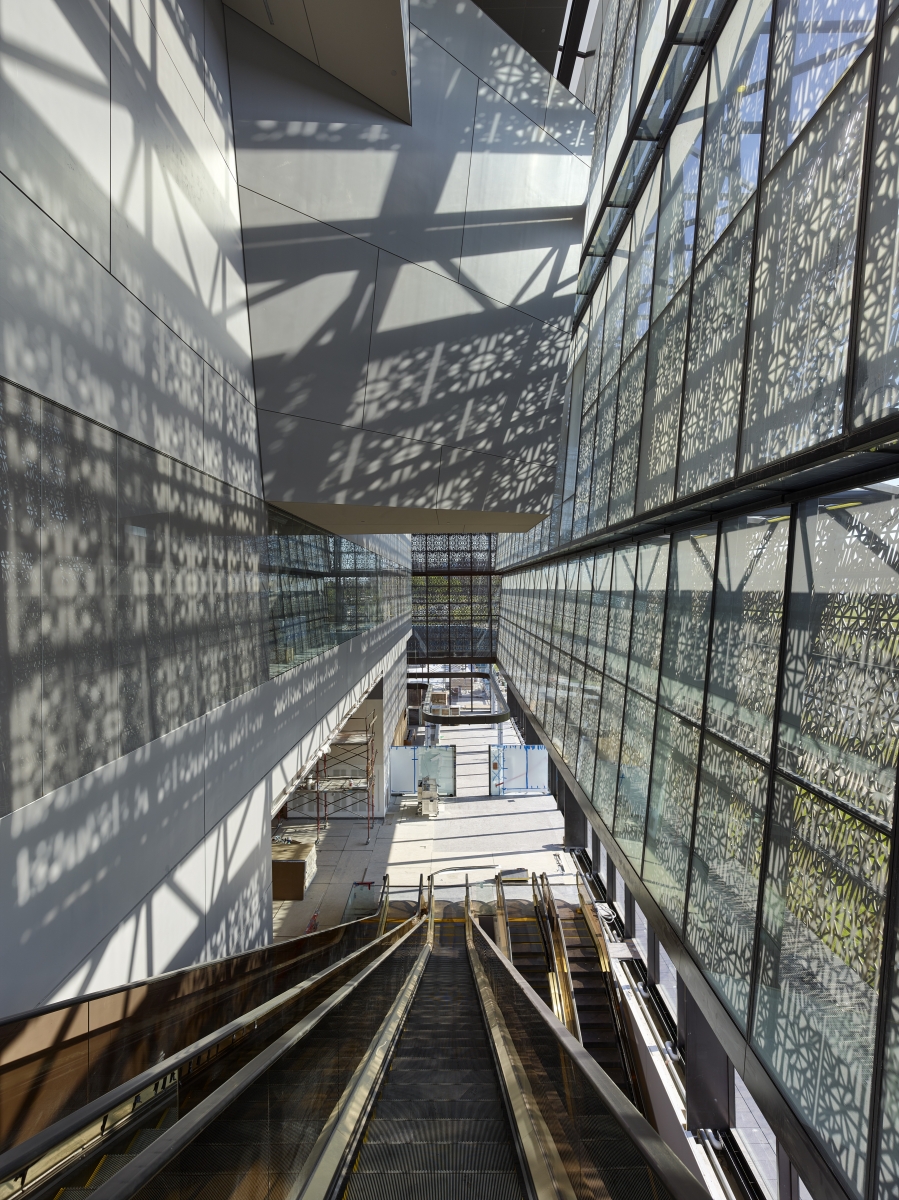 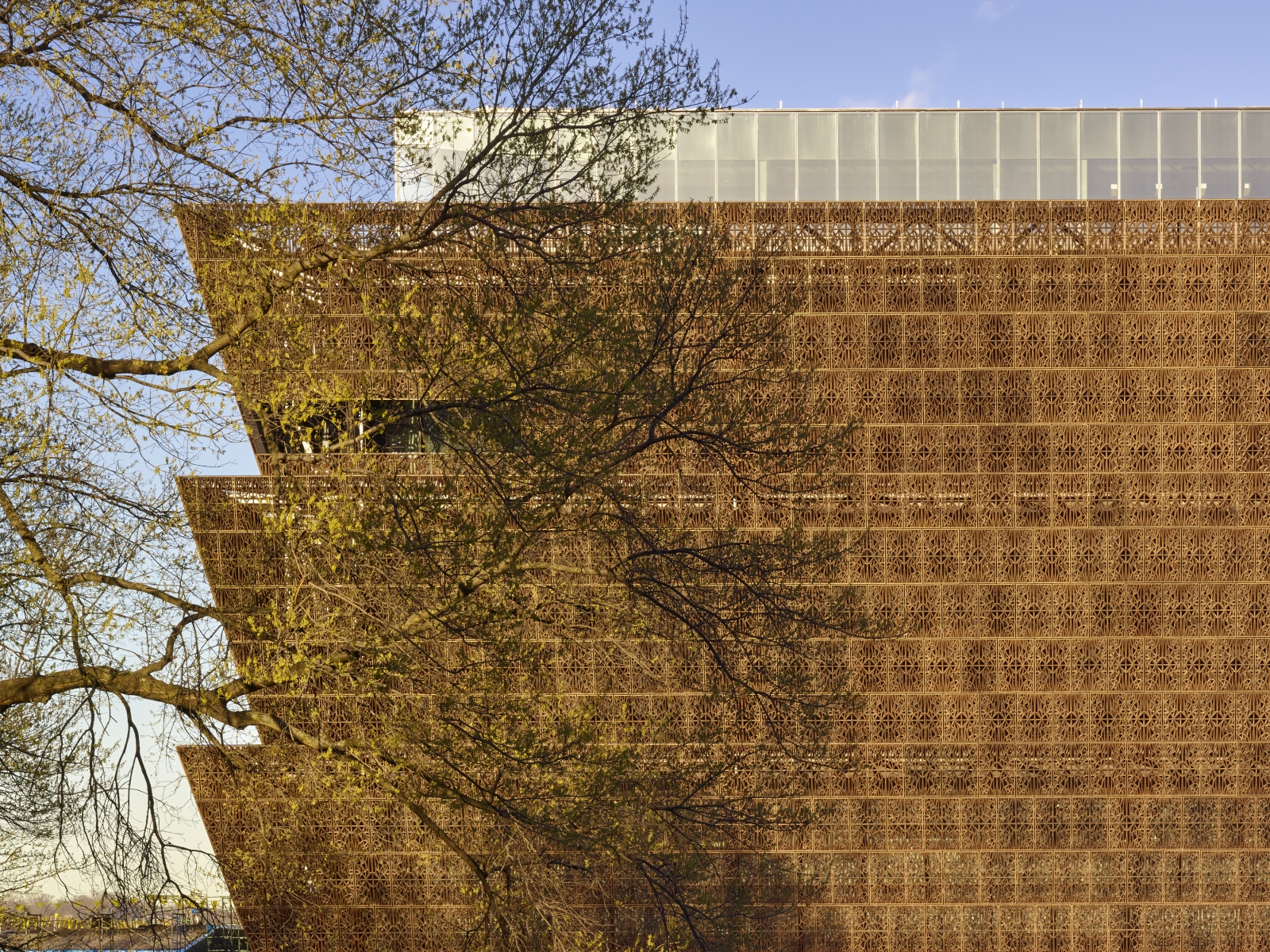 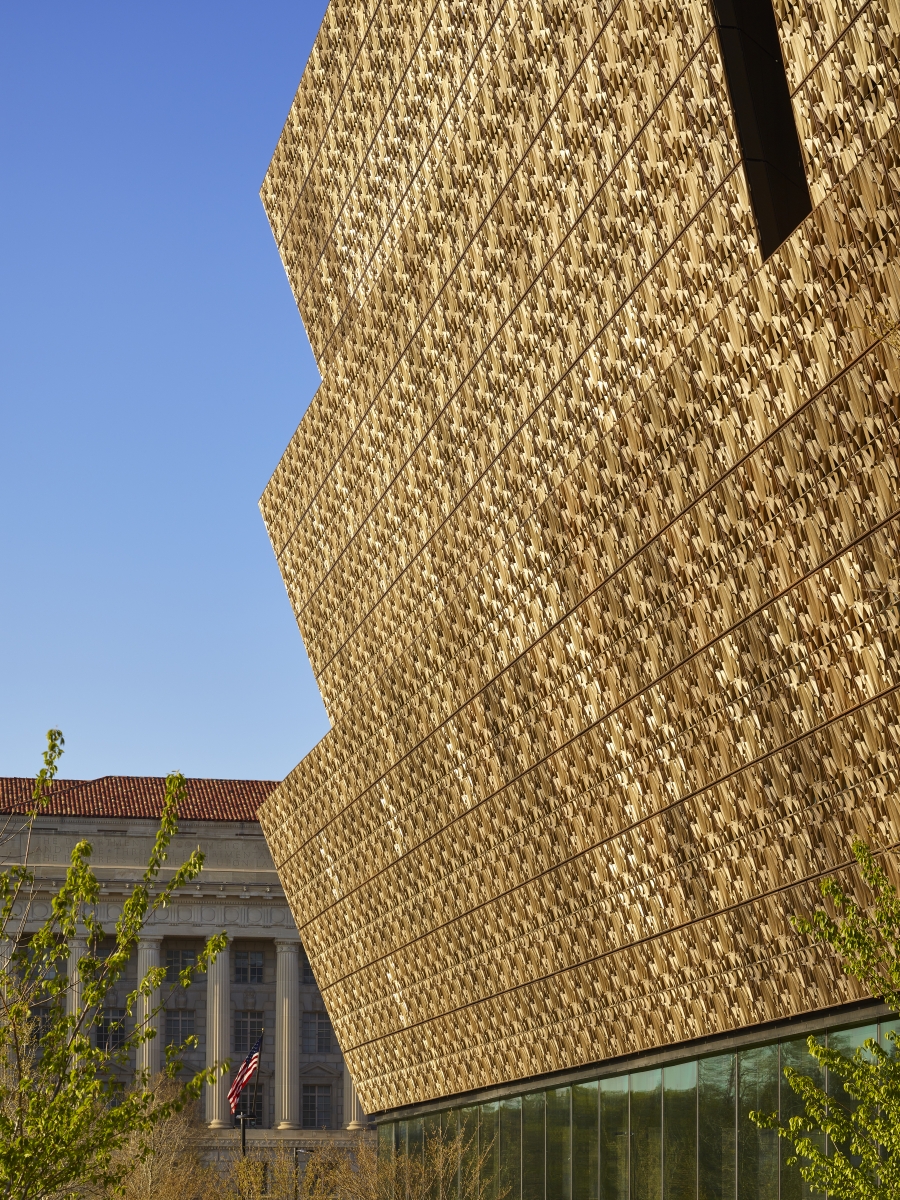 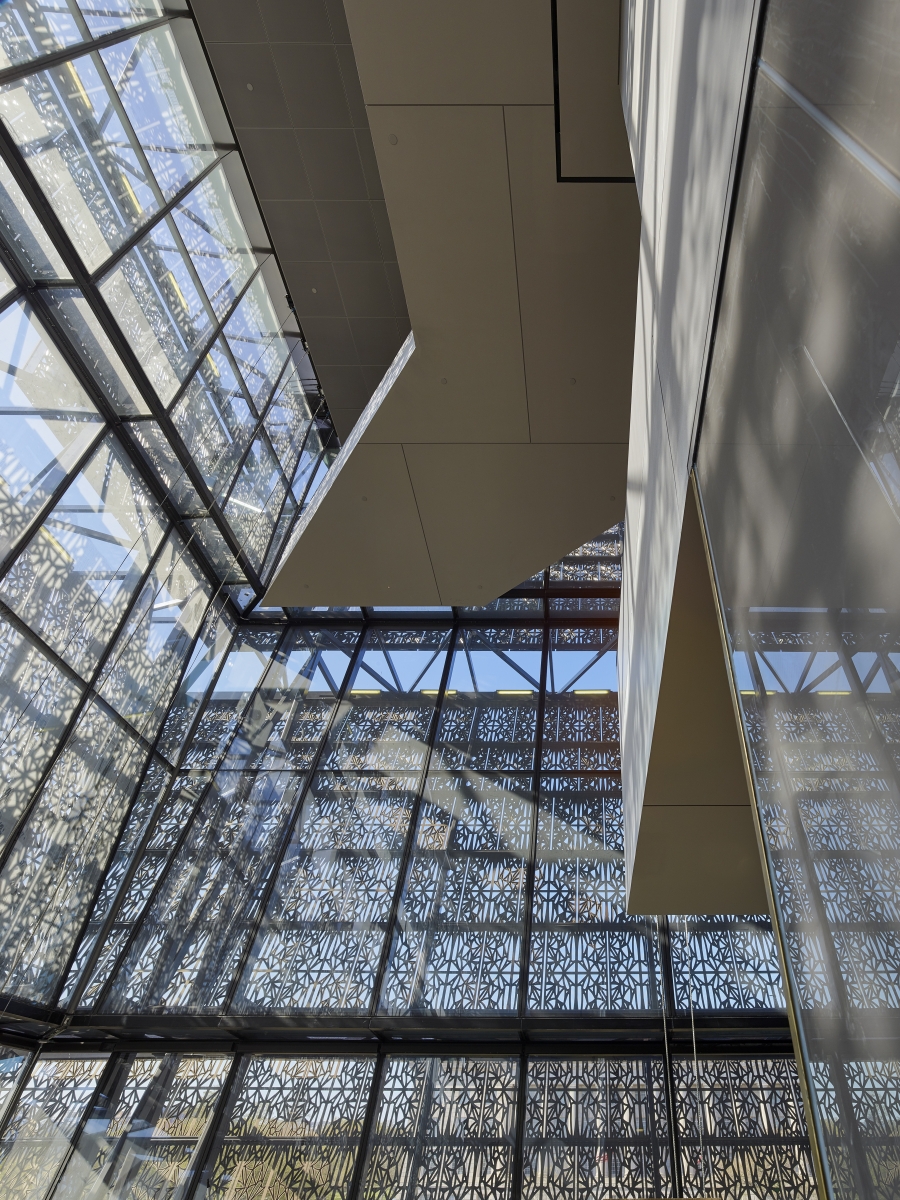