Though most European countries are still battling the second wave of COVID-19, The Lille Métropole 2020 World Design Capital program is pushing ahead with a fall of thought-provoking exhibitions, workshops, and conferences. Spread throughout the northern French metropolis and neighboring cities, the multifaceted event will promote the region’s economic innovation while also tapping into global design trends, hosting an eclectic array of showcases on topics such as sustainability and limited edition furniture design.

Standing out from the rest is a comprehensive group show curated by Lidewij (Li) Edelkoort and her longtime business partner Philip Firmano. La Manufacture: A Labour of Love, running from September 9 to November 8, surveys the so-called neo-materialist movement. The term was recently-coined by the world-renowned trend forecaster and educator to encompass the work of 60 emerging and established designers that have led the charge in material exploration in the past 20 years.

The exhibition includes a wide range of speculative and applied designs that reveal the full scope of this collective output. Chairs produced using paper pulp by Marjan Van Aubel and James Shaw join grown-flax textiles by Pauline Esparon. Paul Cocksedge’s stone tables hewn out of the foundations of derelict buildings and Erez Nevi Pana’s nature-guided salt-crystallized stools juxtapose adaptable sleeping bag jackets developed for homeless people by Bas Timmers. Marlène Huissoud and Tomáš Libertíny’s groundbreaking beeswax vases play off of Eileen Fisher’s ongoing upcycled textile Waste No More initiative. Some pieces even challenge the conditions of labor itself. With their About a Worker project, young designers Kim Hou and Paul Boulenger challenge the fact that factory workers are rarely involved in the research and development of the products they manufacture. 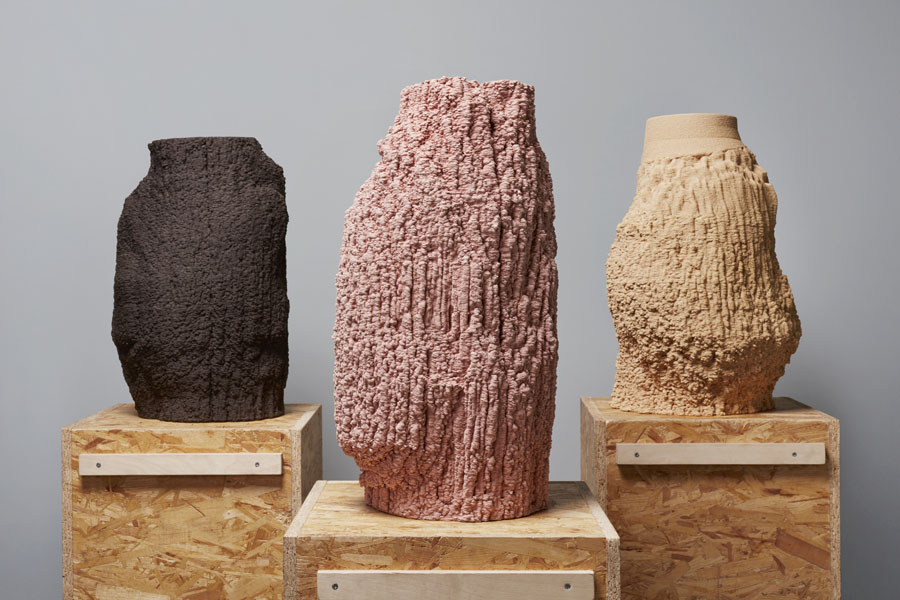 Codifying this period of unfettered creation as one that incorporates a renewed sense of resourcefulness and essentialism, the curators focus on a return to craft-led production, new modes of social consciousness, and environmental action. Edelkoort and Firmano have pinpointed the nascent methodologies that define this movement, with the exhibition and accompanying book comprising thematic subsections like “Accumulating Remnants,” “Pulping Shape,” “Excavating Fragments,” “Gathering Fiber,” and “Growing Design.” The survey highlights traditional crafts like glassblowing and ceramics; however, it focuses on how young practitioners have re-engaged these age-old techniques and pushed beyond material limitations.

The curators cite the influence of the Arts & Crafts movement of the late nineteenth century, which came as a reaction to the rampant advancement and detrimental impact of industrialization. Practitioners like William Morris advocated for a revival of skilled labor, a nature-inspired aesthetic, and social reform. They also mention mid-20th century writer Victor Papanek, who criticized frivolous style-driven design in favor of ecological responsibility.

“At the turn of every new century, people return to craft,” Edelkoort reflects. “At the start of the 21st-century, the discipline returned to the human hand. It came as an antidote to the disconnected nature of industrial design. However, the hand [still] wanted to be stimulated by some form of mechanics. I compare this phenomenon with Edward Scissorhands. Designers began hacking printers and reconstructing looms, inventing new [bespoke] half manual, half automated machines. It’s a beautiful period in which man and machine began working hand in hand.”

Mounted in Lille’s Gare Saint Sauveur, the exhibition will feature these adapted devices alongside each designer’s career-defining project. “The show offers a hermetic vision of what’s happening and immerses the general public in a rich storyline,” Edelkoort explains. “[Visitors] will gain a better understanding of a new horizon in which we will produce less and on a much more local level. Products will be made to measure by designers using recycled materials and leftovers. They will continue to work on the periphery of an outdated system.”

Edelkoort, who spearheaded Parsons School of Design’s MFA Textiles program in 2018, is no stranger to material experimentation and other alternative design methodologies. As the chairwoman of the Design Academy Eindhoven during the early 2000s, she established new departments that concentrate on various modes of conceptual thinking rather than traditional disciplines. In many respects, this curatorial project assesses a movement she helped establish in the first place.

“I saw my students in Eindhoven massively overhaul what they were doing towards a much more craft-minded positioning of their work. It was at the Design Academy, that the idea of autonomous design was first defined,” she says. “Then, a host of other talents began to dedicate themselves to making their own work and crafting materials.”

Aware that this approach has spread to other schools and countries throughout Europe, Edelkoort has been watching this shift progress and has predicted its broader impact for many years. In her capacity as a trend forecaster, Edelkoort has always focused on macro societal and cultural trends rather than stylistic fads. La Manufacture: A Labour of Love is no exception.

Though the show looks back at two decades of bustling activity, the curators see it as only the beginning and a catalyst for systemic change. “Moving forward, we will develop the need for spiritual content. A belief in animism is returning, not only when addressing objects but also materials,” Edelkoort concludes. “There’s a great interest in how we were born as a species and how we designed ourselves into our current condition. It’s inspiring many designers to go back and not only rethink how we make things but also how we live, move, eat, and communicate.”