Underneath the playful antics of the British duo’s mind-bending, tongue-tickling lies an architectural rigor. 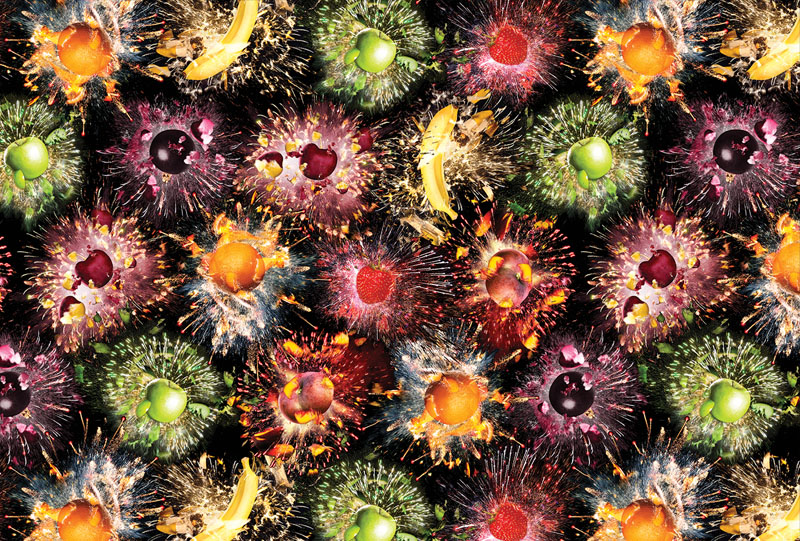 In partnership with the mayor of London and the telecommunications firm Vodafone, Bompas & Parr created the world’s first multisensory firework display for the city’s 2013 New Year’s Eve celebration. The duo went on a global fruit quest to find the ultimate flavors, which they ensured were halal and kosher approved.

“British culinary wunderkinds.” “Willy Wonka during his freewheeling student days.” “Culinary deviants.” These are just a few things that the international press has called the food design partnership Bompas & Parr.

Sam Bompas and Harry Parr call themselves specialists in flavor-based experience design, culinary research, architectural installations, and contemporary food design. But exactly what they do is nearly indefinable. Perhaps they could be best summed up as multisensory designers. Whatever you call them, it’s clear that they’re visionary creatives who know no limits.

Bompas & Parr’s collaboration sprung from friendship. “Harry and I have known each other forever,” says 31-year-old Bompas. “We were old pals at school and we just wanted to do fun stuff all the time.” And what could be more fun than starting a jelly company? So, Parr, a trained architect, and Bompas, who has done everything from financial public relations to running an escort agency (no, not that type of escort agency—one that helped business travelers meet each other), joined forces. While their original intent was to secure a stall at Borough Market in London—which never eventuated—their vision evolved into something much bigger. “We were an events company, an arts company, and a lot more on the side,” Bompas says. “And we were doing really interesting projects, like filling buildings with booze, making walk-in clouds of gin and tonic, and catering for thousands of people in a batch—all sorts of good stuff.” 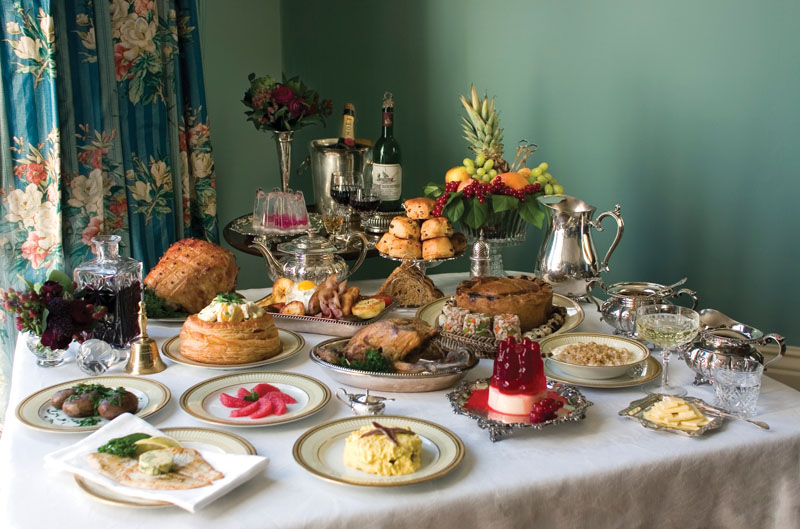 Their first major undertaking stemmed from a promise that they weren’t even sure they could keep. “There was an article about us in the Sunday Times saying we could make any jelly in any shape and size,” says Bompas. “Of course, we couldn’t at all. Someone called us and asked us to make a massive jelly the size and shape of a castle—which we knew would be absolutely impossible. But I kept him talking and sold him that we could make a 12-course Victorian breakfast. It was quite ambitious, but great fun. By the time they realized we weren’t a professional kitchen, we had worked out how to turn the ovens on, and we were away.” Bompas & Parr’s culinary explorations have now gone far beyond a 4,000- calorie breakfast. For the pair’s 2014 The Flavour Conductor exhibition, created in partnership with Johnnie Walker Blue Label, a team of artists, designers, church-organ specialists, composers, and theatrical production experts created an organ that produced sounds and lighting effects to complement the whiskey’s six distinct notes.

Pushing the boundaries and sparking conversation are central to Bompas & Parr’s work. Their recent project Monumental Masonry explored what monuments, mausoleums, and tombs looked like in the past, and what they will look like in the future. It called for architects and designers to submit models of epic monuments in a magnificent celebration of death, and the results were displayed at Sir John Soane’s Museum. “We’re interested in how the current media landscape changes people’s perceptions, understanding of, and relationship to death,” explains Bompas. “Business is booming for morticians and funeral directors, as people want to go out with a bit more pomp. And there are unusual things happening on Facebook because the walls become memorials and tribute pages that live on after people die.” 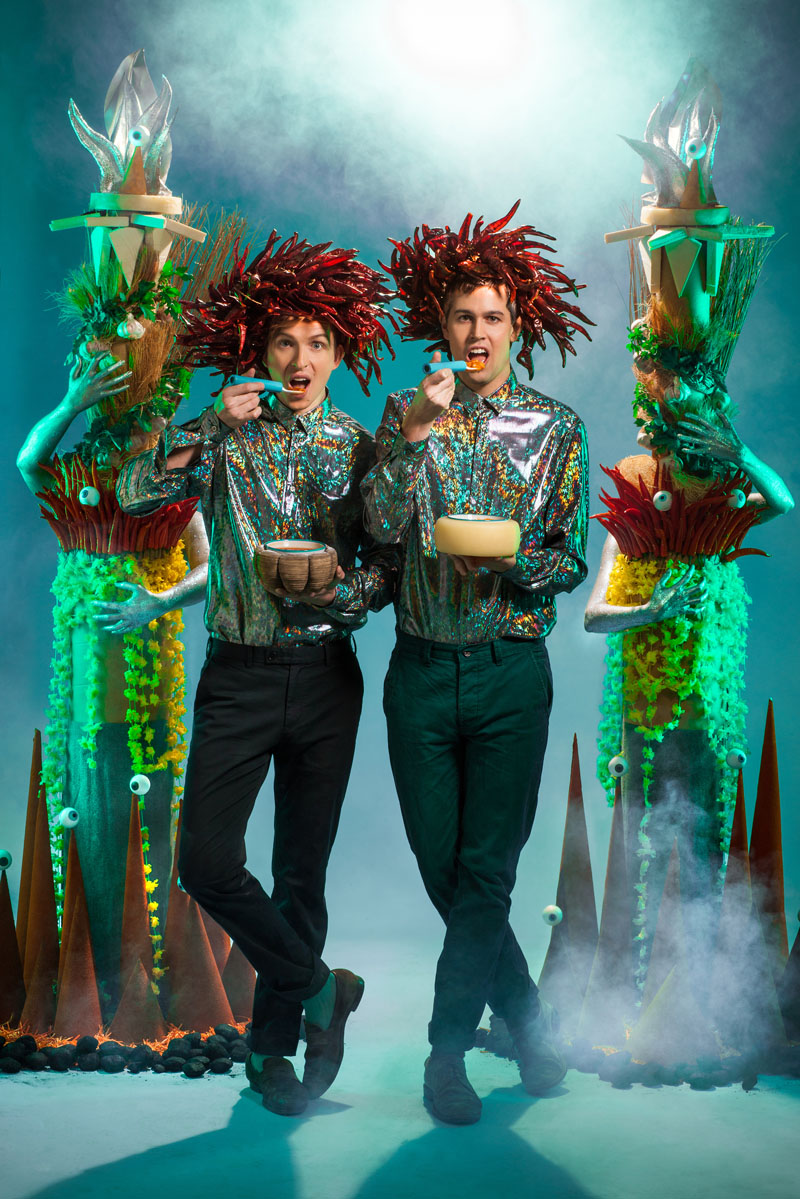 In the beginning, Sam Bompas and Harry Parr were simply experimenting with catering, events, and art. “Our projects came out of a shared interest in food, culture, and human experiences,” says Bompas. “Together, we found we work quite well as a team. We’re so very, very different and we disagree on most things. But we agree on the important things.”

“The most important thing is that people have really gripping experiences,” says Bompas. He points to their latest project, which debuted on Valentine’s Day 2015 at London’s Ace Hotel, as an example. “This is one that gets people by the balls,” he says excitedly. The project is an anatomical whiskey tasting that helps people understand their palates in relation to age. “You give people increasingly rare, wondrous, and august aged spirits, but it’s very hard to really understand what the implications of aging are and what all that time in casks really does,” he says.

To tease that idea apart, Bompas & Parr took spirits put in casks in a certain year and paired them with people—aged 25 to 50—who were born that same year. Visitors then drank the whiskey off that person’s naked form, licking it off the contours of the body. “It really makes you think when you’ve got to have this negotiation with the model about where on their body you’re going to drink it from.” 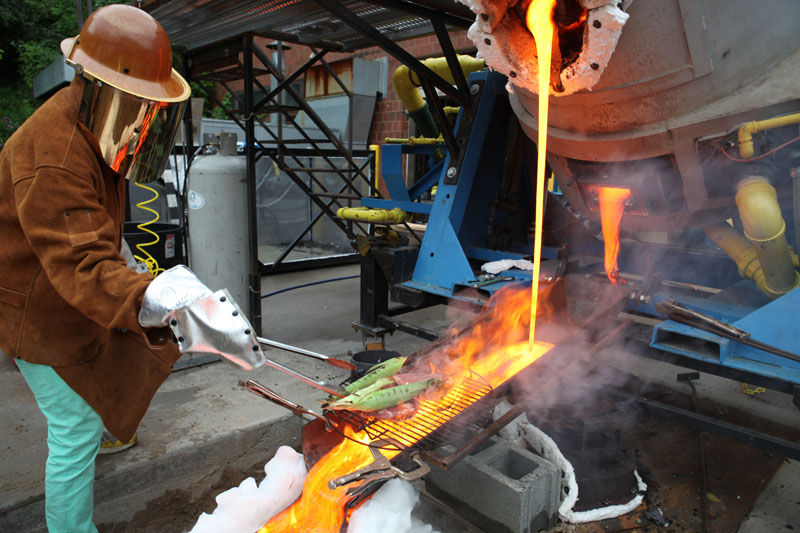 To create what the U.K. Daily Mail called “the ultimate barbecue,” Bompas traveled to Syracuse University to cook steak on an artificial volcano. Working with Professor Robert Wysocki, who had perfected a technique to make lava in an industrial bronze furnace, Bompas declared it the best steak he ever had.

Bompas & Parr’s constant curiosity means unlimited potential for the wacky and weird. And surrounding themselves with people who have a diversity of knowledge doesn’t hurt either. “We’re working on some bioluminescent projects with a rogue biologist interested in acid manipulation,” says Bompas, naming some of his intriguing collaborators. “There’s also an ethnobotanist who is out in Ghana at the moment doing an Iboga ceremony. While he’s there, he’s trying to source some rare and wondrous fruits that people in the Western world haven’t tried before. And we’ve got a plasma scientist who is really interested in the implications of cooking with plasma.”

The two are well on their way to becoming cultural icons. For London’s New Year’s Eve 2013 celebration, they created multisensory fireworks with smelling and tasting clouds of apple, cherry, and strawberry mist, as well as peach snow, and bubbles filled with Seville-orange-flavored smoke and edible banana confetti. “We’re really interested in very, very large audience figures,” says Bompas. “For the fireworks, we had a live audience of a quarter-million people, and then the audience watching on TV sets was about 14.3 million—which in the United Kingdom was the largest viewing audience of anything that year. But there are bigger events in the world and I want bigger. I want the Super Bowl halftime show.”