It seems that the most contemporary aspect of Wright’s work is his unique, manually recursive design process. 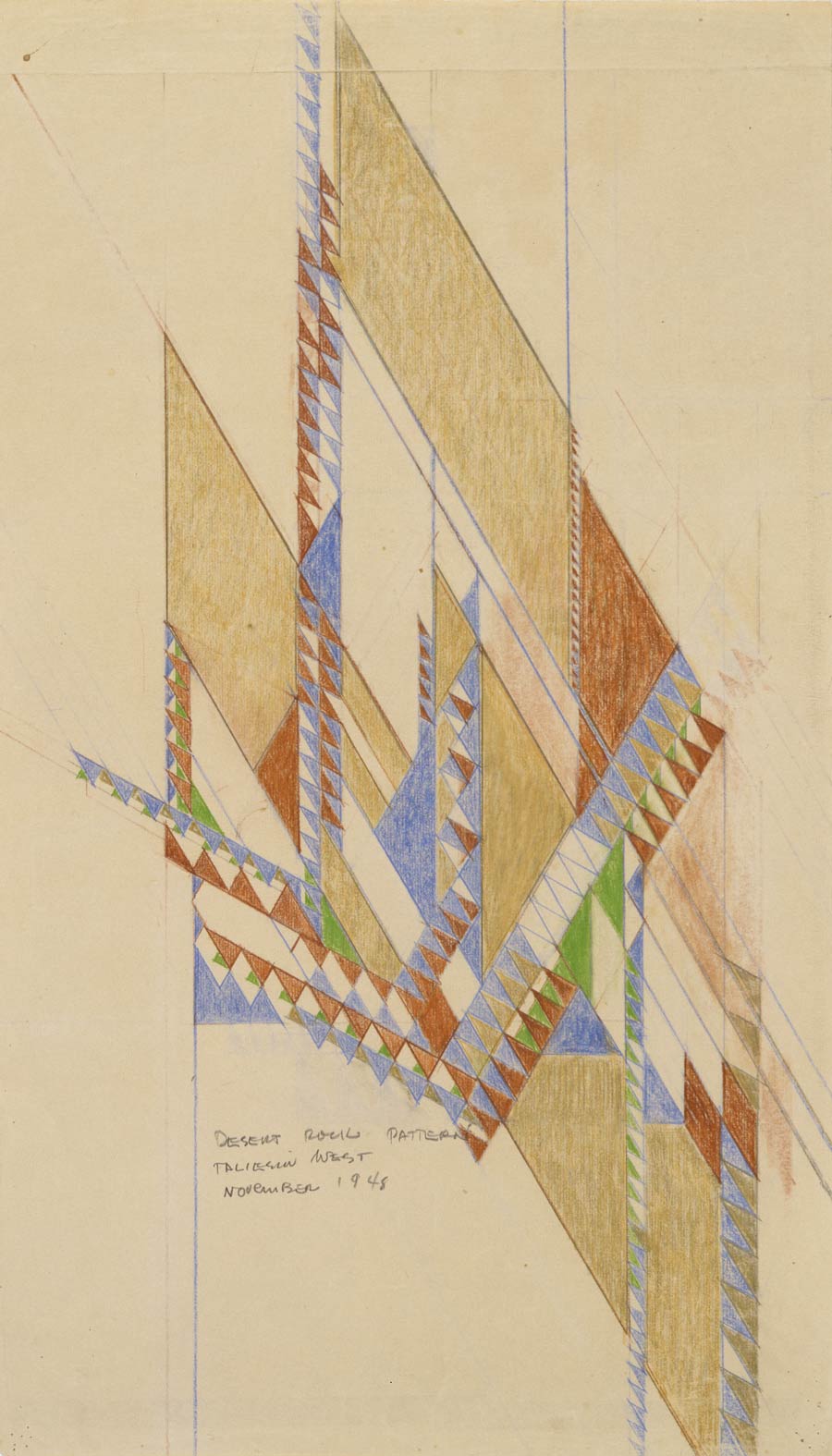 Frank Lloyd Wright’s field of influence is so wide, it’s hard to tell where it starts and ends. As America’s foremost architect, he helped popularize design concepts that are held up as evidence of progressive values and progressive architecture. His notion of building with natural landscapes takes on new meaning in the era of low-carbon energy efficiency. His penchant for incorporating local, on-site materials into a building prefigured the later critical regionalist movement, which continues apace in China. And the open layout of the Usonian house, broken up not by partitions but by zones of activity, anticipated today’s live-work gospel.

But, unexpectedly, Wright’s graphic language has proven to be one of the most contemporary aspects of his work. It’s the logic underlying these works, and not necessarily their aesthetic quality, that has grown in currency, says architect and Wright authority Anthony Alofsin. “He worked in a kind of algorithmic way—an iterative process of geometric formulation.” Wright, Alofsin explains, would “take the algorithmic process of form replication, that looks like ornament on the exterior, but that’s applied to everything—floor plans, sections, and so forth. That’s the root of the organic idea. It’s exactly the thing the computer does extremely well.”

Contrary to the vision of Wright as a master of the freehand napkin sketch, he was a rigorous and implacable draftsman. He would often take a basic geometric unit and repeat it again and again, like the fractalization of a crystal, often starting with assorted plant life and the geology around him. Wright saw in the flora around Taliesin West, his winter home, the “tectonics of the desert,” writes Jennifer Gray, co-curator of the Museum of Modern Art’s 2017 Frank Lloyd Wright at 150: Unpacking the Archive exhibition. She quotes Wright in his enthusiasm for the “welded tubular construction in the stalk of the cholla or staghorn.”

Taliesin fellow Eugene Masselink’s form-study drawings from the 1930s abstract barrel cactus or lichens into a fundamental geometric unit (a triangle) and propagate it into rich layers and textures. In the 1960s, while still teaching at the Frank Lloyd Wright School of Architecture (recently renamed the School of Architecture at Taliesin), Masselink formalized the process for a class themed around “nature patterns” that continues to this day. The methodology has since been digitized, thanks to the efforts of designer Aris Georges, who taught at the school for 15 years. Georges “samples” the graphic studies of past Taliesin fellows, looking for particularly evocative motifs; he then iteratively fashions these cherry-picked patterns—abstractions of the bottlebrush blossom, sumac, birch bark—into new compositions.

For Georges, these “remixes” are a way to refocus the design world’s obsession with novelty into an open-source future. Computation gives a sense of a totality that facilitates collaboration, he explains. “I can see something in your idea that you didn’t see, and instead of competing with it or ignoring it, I’m saying, this is another side. All of us have blind spots in everything we do, and when we allow each other to work off each other, those go away, and you see more of the picture.”

The protodigital sensibility of Wrightian nature patterns looked ahead to Walter Netsch’s field theory explorations and even Zaha Hadid’s early graphic experiments. (Hadid, in fact, had wanted to lecture at Taliesin last year, citing Wright’s pivotal influence on her, but she died two weeks before her scheduled appearance.) “What Wright did intuitively through hands-on work out in nature and out on the farm with materials, we get to extend with the computer,” says architect Chris Lasch, the school’s director of academic affairs. Lasch is working to push the full potential of these recursive experiments, along with a larger project (still in the early proposal stage) to use machine learning to reinterpret Wright’s archive. The idea, he says, is to search for “a new way of drawing out motifs and hidden structures from the body of Wright’s work.”

It almost seems counterintuitive to interpret Wright using cold digital logic. After all, he returned again and again to the sanctity of the natural world and often doubted the ability of any person beyond himself to decipher it. Yet, he was always a utopian technologist at heart, planning the world’s tallest towers, its broadest suburb filled with its noblest houses, and personal helicopters needed to get from one to the other. He was the first to jump on the newest building technologies. Is it a stretch to say he would do the same today?