In this exclusive interview, Metropolis talks to designer Don Chadwick, who co-designed the original Aeron Chair, to understand the spirit behind the update.

The ancient essayist Plutarch once posed the following theoretical quandary—if all the parts of the legendary ship that Theseus sailed were replaced and updated by the time he sailed it back to Athens, was it still the same Ship of Theseus?

Today, Herman Miller announced the remastering of the Aeron chair—one of the most successful and well-known office chairs of all time—with a host of material, technological, and ergonomic updates. Its distinctive shape and name, however, remain untouched. So Don Chadwick, who designed the original Aeron chair in 1994 with Bill Stumpf,  knows he will have to come up with a satisfactory answer to Plutarch’s question.

“I’ve often drawn an analogy to the Porsche 911, which came out in 1965,” he says. “The overall profiles of that car have pretty much remained constant up through the latest models. It’s a different car, but in a way, it’s the same car.” Chadwick and Stumpf revolutionized office seating with the original Aeron. The tilting mechanism supported many postures, and the mesh for the back and seat eschewed foam and upholstery to bring transparency—and breathability—to offices. It was a chair designed for the digital age. Chadwick, now 80, has been involved in the design of the new Aeron, helping re-engineer the mesh to focus support on certain areas of the body and changing the technology that drives the tilt mechanism. In this exclusive interview, Metropolis talked to him to understand the spirit behind the update. 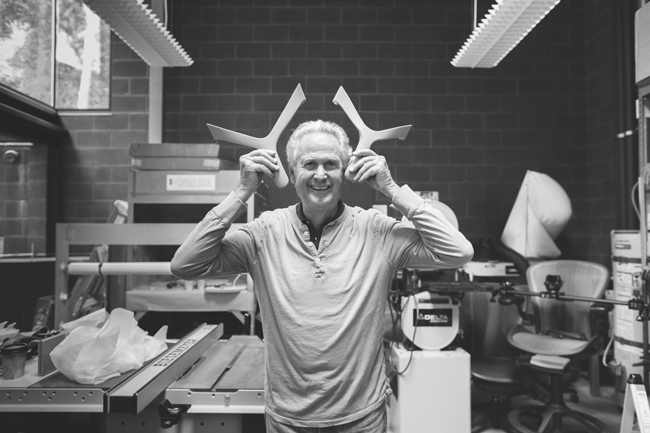 Avinash Rajagopal: We think of the Aeron as a serious chair, but you’ve often said that you and Bill Stumpf were inspired by toys. Can you explain?

Don Chadwick: When Bill and I grew up, we had toys like an erector set, or we had blocks. The fact that you could put something together, disassemble it, and then put it back together was a critical part of the ideas behind the Aeron chair—as it was with its predecessor, the Equa chair.  We also drew upon the analogy of bicycles that are easily repairable. So even though you wouldn’t characterize the Aeron chair as a playful composition, it’s playful in the way it’s conceived as a construction of parts.

AR: You mentioned the Equa chair, how was that a predecessor to the Aeron?

DC: The Equa chair had certain integral dynamics, particularly in the shell. We designed the shell so that it would provide the proper amount of flexibility as you sit into the chair and sit back. It also incorporated one of the first so-called knee tilt mechanisms, where the pivot point moved from the traditional position above the center post, forward. It was sort of mimicking your knee joint. That was the beginning of understanding a whole new set of kinematics, the way the body moves and the way the chair moves.

We also began to look at chairs that no longer dictated status. Up until the late ’70s and early ’80s, there was an executive chair, there was a management chair, and there was a secretarial chair. There was this idea of inequality in the office, and when we did the Equa, we said, “Well, everybody deserves a good chair.” When we got into the Aeron chair, that attitude continued because we offered it in three different sizes. So whether you were small or large, everybody got the same chair. 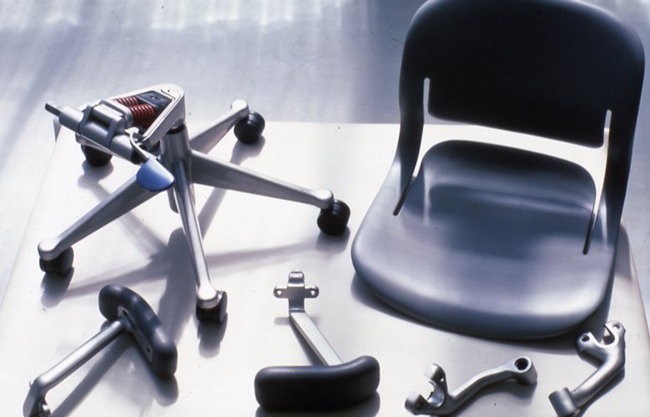 Herman Miller’s Equa Chair, also designed by Chadwick and Stumpf, was designed to be disassembled easily.

AR: Another precedent for the Aeron, which isn’t discussed much generally, was this amazing project that you did in the late ‘80s called Metaform. How did that project influence the Aeron?

DC: When Bill and I worked on Metaform, the primary product was a reclining chair. It was designed particularly for older people. We were given the assignment to develop a mini environment, where the user would spend a good amount of time, that could be adjusted from upright to full recline, and also had a table that would swing over the chair, lighting, storage. The reclining chair had many pivot points. Some of those pivot points were useful in establishing how we would develop the Aeron chair.

In that reclining chair we also had a suspension that was a prelude to the mesh in the Aeron. It was an off-the-shelf material that Dupont had developed called Dymetrol, basically a one-way-stretch woven material. We took that Dymetrol idea and made it into what would be called an A-surface—a functional, visual surface. That led to the whole development of the woven material that you call a mesh, in generic terms, but what we call the Pellicle. That did not exist until we did the Aeron chair. It was a whole new seat and back-support technology. And it had its origins in Metaform.

AR: Do you remember the initial reaction to the Aeron chair?

DC: People either loved it or hated it. In the early focus group testing, the moderator would explain the whole concept ahead of time, and then they would uncover the chairs, and people would react to what they saw. They noted all this down. Then, they were allowed to sit in the chair. Their reactions, in most cases, changed quite a bit. They were amazed that it could be so comfortable, without all the traditional accoutrements of upholstery and foam.

The original idea was that the chair would appeal to the technology companies, because they were more involved with heavy computer use, and keyboard interface, etc. It just permeated its way into the entertainment industry. Hollywood picked it up, and all the people that were making commercials were putting it in the commercials. At the same time, all the special effects people were using it, because they were working at computers. Disney got intrigued with it. It just migrated everywhere, way beyond our expectations. I don’t think anybody ever anticipated that it would have such a broad appeal. We’re all very thankful for that. 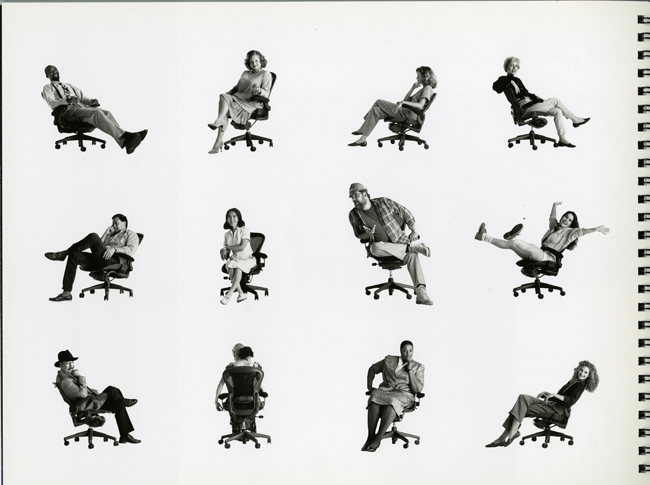 The original brochure for the Aeron from 1994 made it clear that this was a chair for all people and supported a wide range of postures.

AR: So how did you feel when you first heard about the update?

DC: This has been in the works, on and off, for a number of years, so it wasn’t a complete surprise when they finally said, “It’s time.” We had actually made earlier proposals, but it was at NeoCon several years ago that I was approached by the head of design development, Don Goeman, saying that they wanted to go ahead with the project. It was very exciting to take another look at the chair.

AR: Did it allow you to address issues that you wish you could have in ’94?

DC: Well, one of the things that always bothered Bill and myself when the chair came out in ’94 was the tilt mechanism. Because of the type of rubber torsion spring we used, it was always visually a little bulky looking. With the new Aeron, since we’re using a leaf spring mechanism, we were able to re-scale the chair according to that mechanism. It’s much slimmer in the profile. All the proportions are quite a bit lighter.

Everything on the chair is brand new, from the castors up. The whole composition is more refined. The various castings, the swing arms, everything has been re-proportioned. There are also a couple of metallic-looking finishes that I think give the chair a little more character in different lighting conditions.

AR: The original Aeron was an exercise in material design, especially in the mesh. How does the new chair take that material science approach further?

DC: Brock Walker, who is a consultant to Herman Miller and was very involved with the original Posture Fit on the chair, came up with specifications for how the mesh, which we call Pellicle, could better support the body both in the seat and on the back. Going through those required that we come up with a much more sophisticated weaving process. It’s now called a zoned suspension in that there are four different zones on the seat—it allows sufficient support at the front edge, but as you move back it gets a little bit softer, and then to the rear it stiffens up again. There’s actually four different stiffnesses that are incorporated into that weave, which is a whole new technology. On the back, likewise, there are various zones of stiffness. The evolution of this Pellicle is really a major breakthrough in the technology of the chair.

AR: The original Aeron came out at a time when computers were widely being adopted. We are now in the throes of another digital revolution, with smart devices. Can you talk about the relationship between digital technology and the Aeron, old and new?

DC: Well, the original Aeron chair was designed by hand, all the prototypes were built by hand. Of course, with the new chair, it’s all digital. The parts were designed on the computer, and then 3D printed to make sure everything was correct. The new Aeron is a product of the new computer software programs, as are a lot of other chairs today.

But also, the mobility of people working today is so different because of smart devices and portable devices. You’re no longer tethered to a traditional keyboard and a monitor. But there are certain industries where sitting in a chair is still the dominant way that people work. So even though they may have a smartphone or a laptop, they will still use a chair that provides multiple positions to work in. I don’t think you’re ever going to replace a good chair. The Aeron is as important today as it was back in 1994. 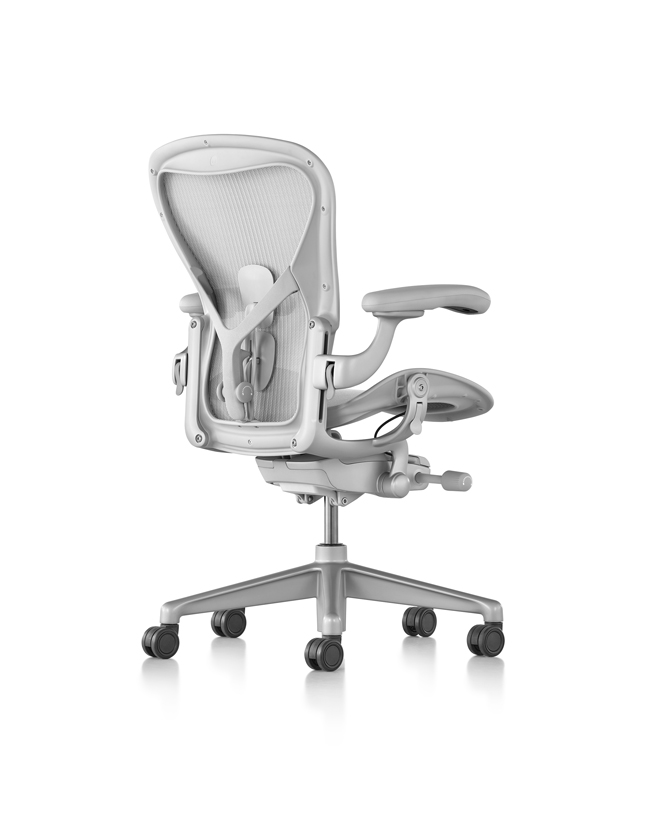 With options for lumbar support, a re-engineered mesh, and a completely new tilt mechanism, the new Aeron improves upon the comfort of the original.