“High-Rise” Imagines a Dystopia in the Sky, Bloodied Concrete and All

The first film adaptation of J.G. Ballard’s classic novel “High-Rise” is a decadent romp set against a background of Brutalism.

The Brutalist high-rises in Ben Wheatley’s new film were inspired in part by Ernö Goldfinger’s Trellick and Balfron towers in London.

For architects, if I may generalize an entire professional community, there are few novelists as cultishly beloved as J.G. Ballard. Borges or Calvino have their fair share of admirers, but to borrow an adjective more frequently applied to buildings, Ballard is the most iconic of literary figures—especially for readers of a concrete-expansion-joint persuasion. Witnessing war as a child, training in medicine, and thereafter writing from a rather bloodless middle-class patch of suburbia, Ballard spun tales of urban life that continue to be uncomfortably visceral.

High-Rise was published in 1975, against the backdrop of a Britain stumbling into economic crisis. Ballard’s chilling prose won’t be re-created here, but in considering the new film adaptation directed by Ben Wheatley, the original context is worth revisiting. High-Rise was published after the luster of postwar reconstruction and the welfare state had faded: Any remaining optimism took hard knocks through oil shocks, industrial strikes, and food shortages. Modernism was declared dead just as it had finally been seized upon. Innovative visions for mass housing—Efficient! Prefabricated! Modular!—were value-engineered and mismanaged beyond all recognition, leading to the execrable physical and social conditions of many hastily constructed tower blocks and estates across the land. The net effect was a mistrust of the architecture itself: This way of living hadn’t worked. Alice Coleman’s highly influential book Utopia on Trial roundly undermined large-scale housing experiments, finding that changing social factors had not been considered in the land use, design, or layout of schemes such as Thamesmead, Roehampton, or Robin Hood Gardens.

Ernö Goldfinger’s celebrated Trellick and Balfron tower blocks loom large over Ballard’s contemporaneous book—and also over the film. The internal walkways and mesmerizing, pick-hammered concrete in Wheatley’s High-Rise bear a striking resemblance to Goldfinger’s London landmarks, once hated, now covetable in the extreme. That’s where the similarity ends: In the film, fictional architect Anthony Royal’s high-end experiment is a willfully ungainly “hand” of crooked digits, each tower a top-heavy finger of farcical proportions. The superficial fetishizing of Brutalism is at play here, just as it is in the film poster’s conspicuous wink to A Clockwork Orange. Jeremy Irons cuts a louche if rather pathetic figure as Royal, but it is protagonist Robert Laing, played by Tom Hiddleston, who acts as a barometric register of the effects of high-rise living. We join him just as he moves into the tower, shortly before he meets and carnally greets his cynical neighbor Charlotte, as whom Sienna Miller is appropriately cast. Events take us through various states of decay: of family structures, friendship groups, human values, personal egos, finally the psychological grip of Laing himself. Hiddleston’s own pale, faraway stare is good at conveying both required attitudes of the confused conscience and numb nihilism.

For lovers of the book, there are the trials of any cinematic translation of a powerful novel. The sinister unheimlich has been replaced by a ramped-up orgiastic hell, the compression of a human journey to madness and back into 119 minutes of Technicolor screen time demanding a dramatic intensity. Ballard’s book is a quick one, but a reader can always pace it out, mull over a phrase while the image refuses to congeal; the immediate richness of film does not permit this mysterious, all-too-glyphic alchemy.

Take Royal’s stricken, bored, and delusional wife, Ann, played by Keeley Hawes, who throws super selective soirees in the architect’s capacious and fantastical penthouse. These scenes are transmogrified into a grotesque Louis XV ball, in contrast to power outages and restricted amenities for the lower floors—amping up, or rather camping up, the levels of callous luxury in the face of human degradation and squalor. Let them eat cake, to mix historical references. This exaggerated theatricality—arguably necessary when bringing print to celluloid or its digital equivalents—is the main jarring note for the more purist keepers of the page. In place of the novel’s ineluctably humdrum horror, Wheatley indulges in achingly perfect costumery, baroque slow motion, mannered montages, and lurid attempts at re-creating the “surreal” side effects of chemical or sexual experiences. The director, stretching his limbs with the most generous budget he has known, matches Ballard’s clinical detachment with an overblown “cinematic” quality to image making. (Personally, I also found the music to be a little hammy, but for others, the end-times melancholy of Portishead covering ABBA’s “SOS” was so apt as to be sublime.) 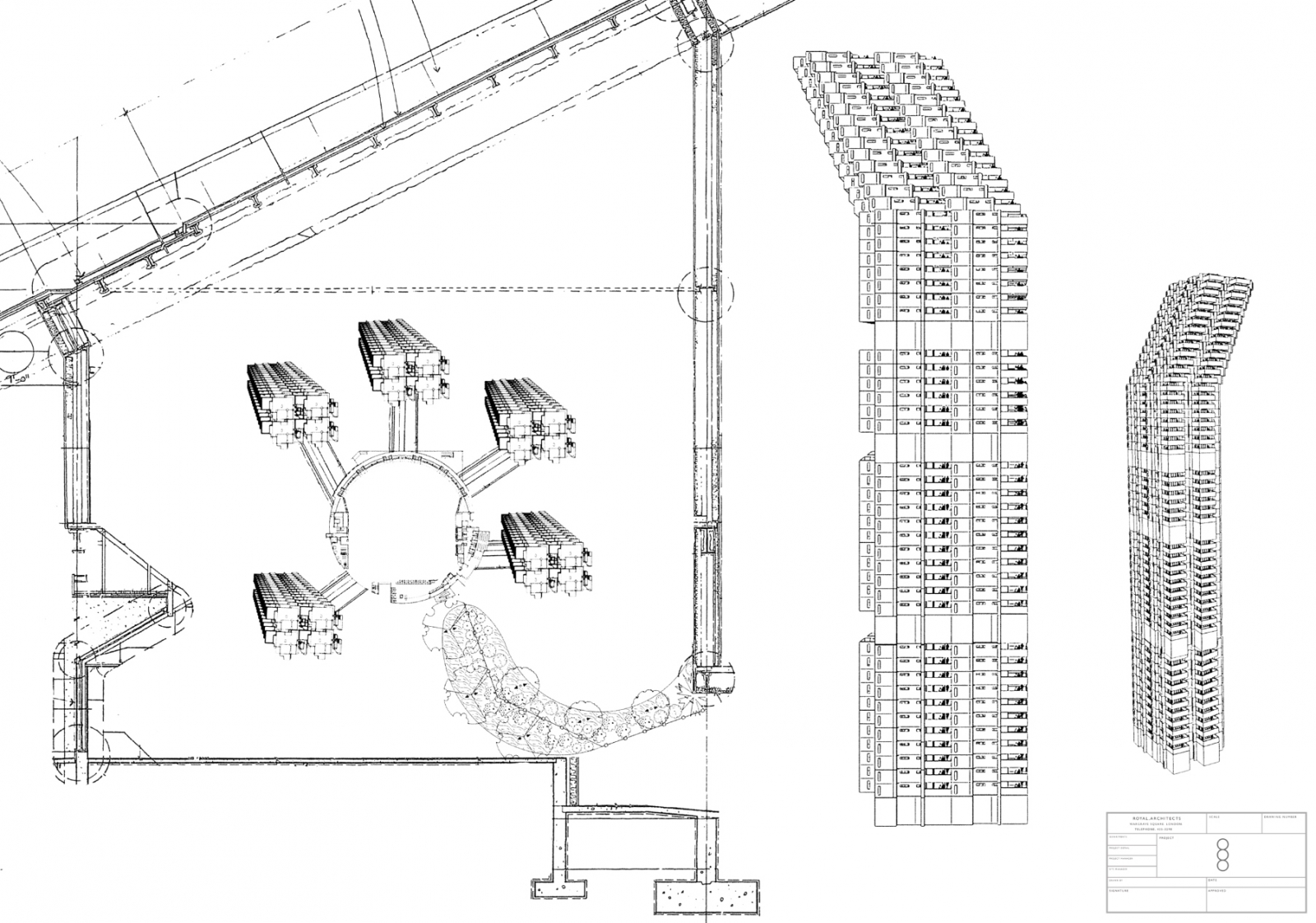 The luxury complex, worked out by the fictional architect Anthony Royal, is configured like a hand, with each tower endowed with a finger-shaped massing.

Ballard’s novel features one filmmaker, eventually compelled to document the degradation of the world around him on a Super 8, heralding the compulsive digitizing and social sharing of all moments. There is a definite claustrophobia in being continuously monitored by one’s neighbors, as in the physical spaces of High-Rise—yet even this scrutiny is not as dehumanizing as being referred to as a door number (as the inhabitants of the building are), itself visible only when the door is shut. When Elisabeth Moss’s doleful Helen thanks Laing for an overdue, if cheesy and short, dose of sexual satisfaction, saying, “You are the best amenity in the building,” her pitiable emphasis is tragically placed not on the carnal best, but rather on you: the flesh-and-blood human, the only adult to whom Helen feels any real connection.

Ballard famously said that he was interested only in the next five minutes, and High-Rise is set in the time of its publication—a period of profound disillusionment with the preceding Labour government and with the postwar romance of ambitious public spending. A few lean years later, Margaret Thatcher enjoyed her first victory in the 1979 general elections; the early ’80s saw the rise of corporate culture, the primacy of the individual, and the competition of private capital as the foremost drivers of social change. There was no alternative, Thatcher affirmed, to the triumph of neoliberal free markets over a mutually responsible communal fabric. (Rest her soul, the Iron Lady also quipped, “There is no such thing as society.”) In terms of the viability of British manufacturing, it was a particular slap in the face to note the growth of German competitiveness since the war, notwithstanding the Berlin Wall, perhaps the only architectural element of social division more potent than the stratified tower.

Isn’t it cultural and systemic structures, rather than even the most brutal of concrete impositions, that torment the psyches of both inhabitants and onlookers?

The one idea espoused by the Thatcher government was that of property, of the importance of private home ownership, and the abdication of the state in taking responsibility for the housing of its people. Between 1965 and 1970, 1.3 million new homes were built under Harold Wilson’s Labour government, and state-provided, or “council,” housing accounted for almost a third of all British homes in the mid-1970s. Under Thatcher, thousands upon thousands of these state-owned homes were rapidly released to private buyers, floating ever higher out of reach on the free (read: ridiculously overheated) market.

Despite the decision to keep the story set in 1975, the timeliness of Wheatley’s film is as impressive as Ballard’s prescience. Then as now, a certain malaise has succeeded a wave of technological optimism. (Wasn’t the internet supposed to fix everything?) An interesting question arises from this present perspective: Is such an environment conceivable today, when technology would surely spread the word and bring relief to the victims of Royal’s failed project? So enthused are we by the capacity to share experience through media that if—indeed when—such carnage occurs today, we make a spectacle of it just as the film does. Then there is the parallel of austerity. In the early ’70s, belts were tightened severely as inflation soared well above 20 percent; in 2013, current prime minister David Cameron reprised Thatcher while ushering in a new economic policy of public thrift, saying, “If there was another way, I would take it. But there is no alternative.” Lastly, Britain faces a crisis in housing even as its property market is the playground of the super-rich. The intense contradictions of contemporary urban life force us to face contingencies, sometimes uncomfortable ones—not least in questioning what we have access to, what we really own, and how high a price we’re prepared to pay for the right to live as we think we should.

Having grown up in a high-rise myself, in polarized postcolonial Kolkata, and then in the repressed suburban bucolism of the English Peak District, I would offer this: The problem isn’t the building, or even the misguided intentions of the all-seeing architect. It’s with people and with how we arrange ourselves to live together. The high-rise gives visibility, in a crude graphic sense, to societal hierarchies and subsequent tribalism—those who “rise” to the top or find themselves trapped in the underbelly. Building height has long been blamed for making apparent those stratifications of culture, class, and, of course, wealth; ever since Babel, vertical aspirations have been emblematic of the poison of social ambition. Progress seems to be measured in the vertiginous skylines of aspiring and established cities alike, even as they symbolize growing inequality among the citizens thereof. But can we really point to the needle tower itself or even to the architect who imagines it? The cultural and systemic conditions that privilege personal gain over use or need, that enable “poor doors” and precarious futures—isn’t it these larger structures, rather than even the most brutal of concrete impositions, that torment the psyches of both inhabitants and onlookers?

Wheatley’s High-Rise is stylish beyond question: sybaritic, darkly funny, and quite beautiful for all that. It lacks the grit of the original, but it is unabashedly a fanboy’s paean. Reflecting on the parallels between then and now, it is perhaps to Wheatley’s credit that he has kept the film so slavishly in period when he could have so easily transposed it to the present day. Because in his overblown, phantasmagoric treatment, there’s just enough Gaussian blur to allow us to enjoy the spectacle and stave off the horror of recognizing ourselves. 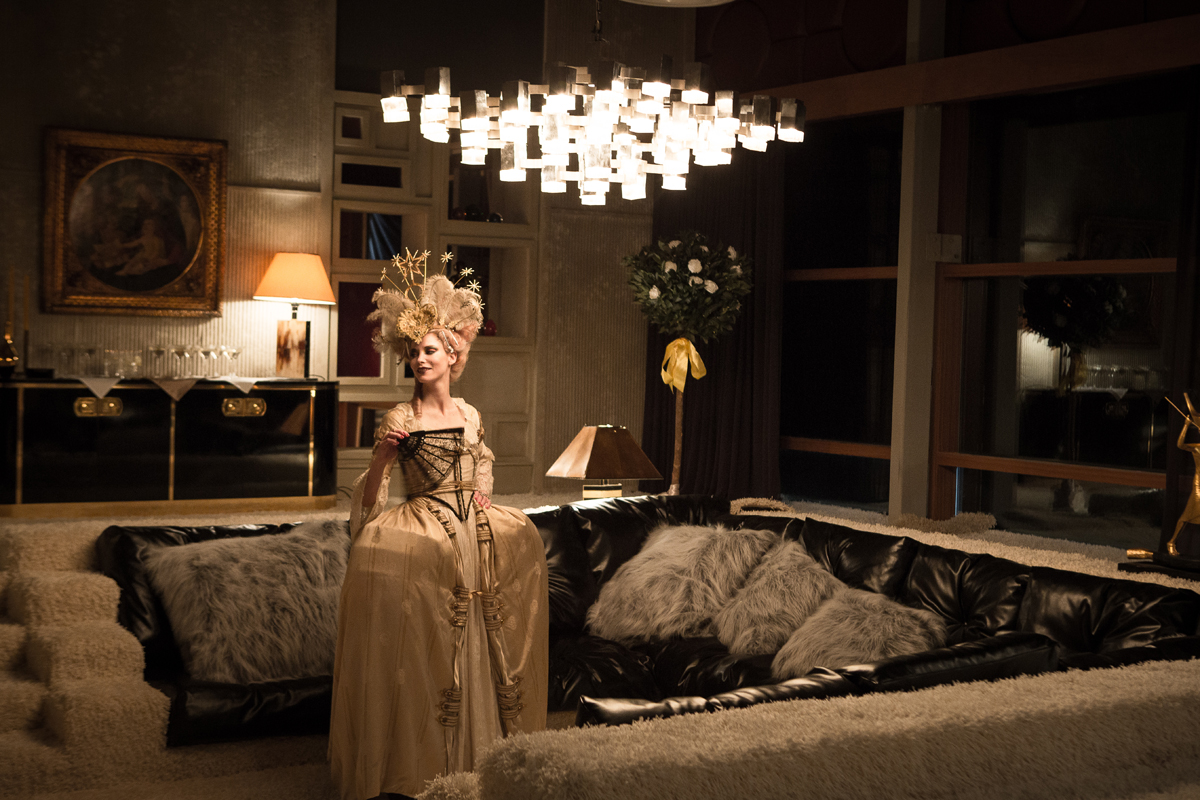 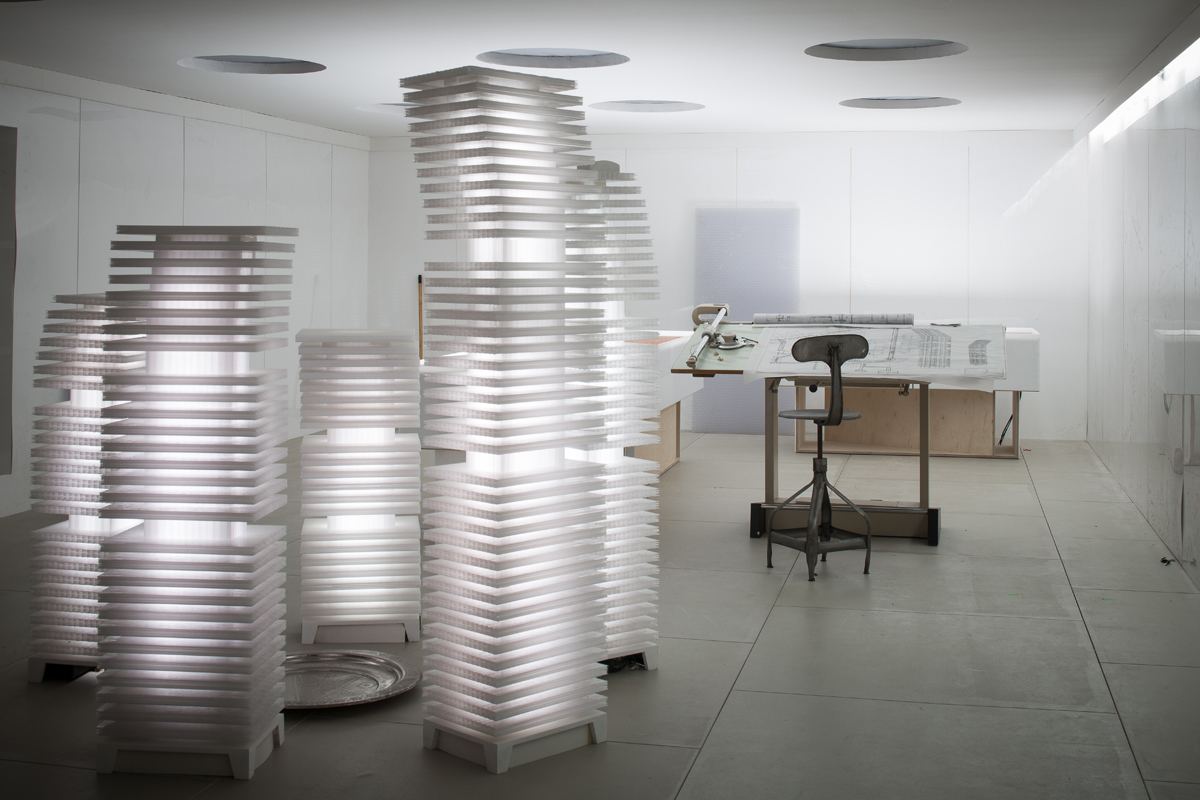 The architects office, with model of the high-rise complex 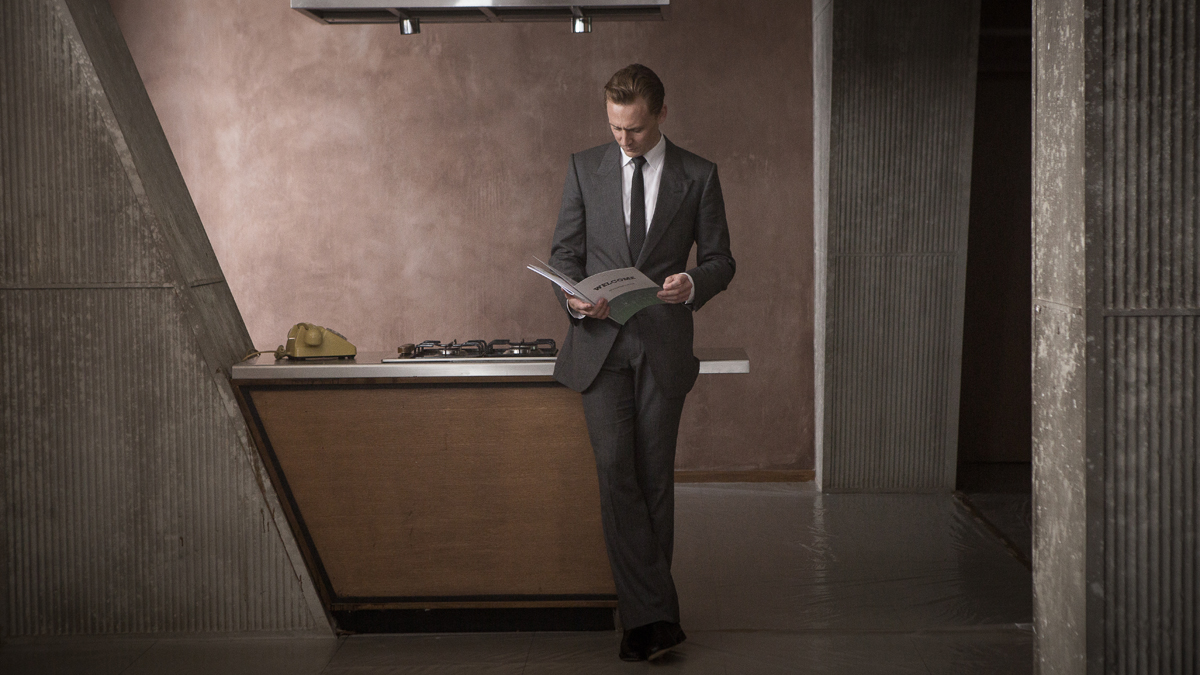 Tom Hiddleston’s Robert Laing flips through a pamphlet extolling the virtues of his new apartment. 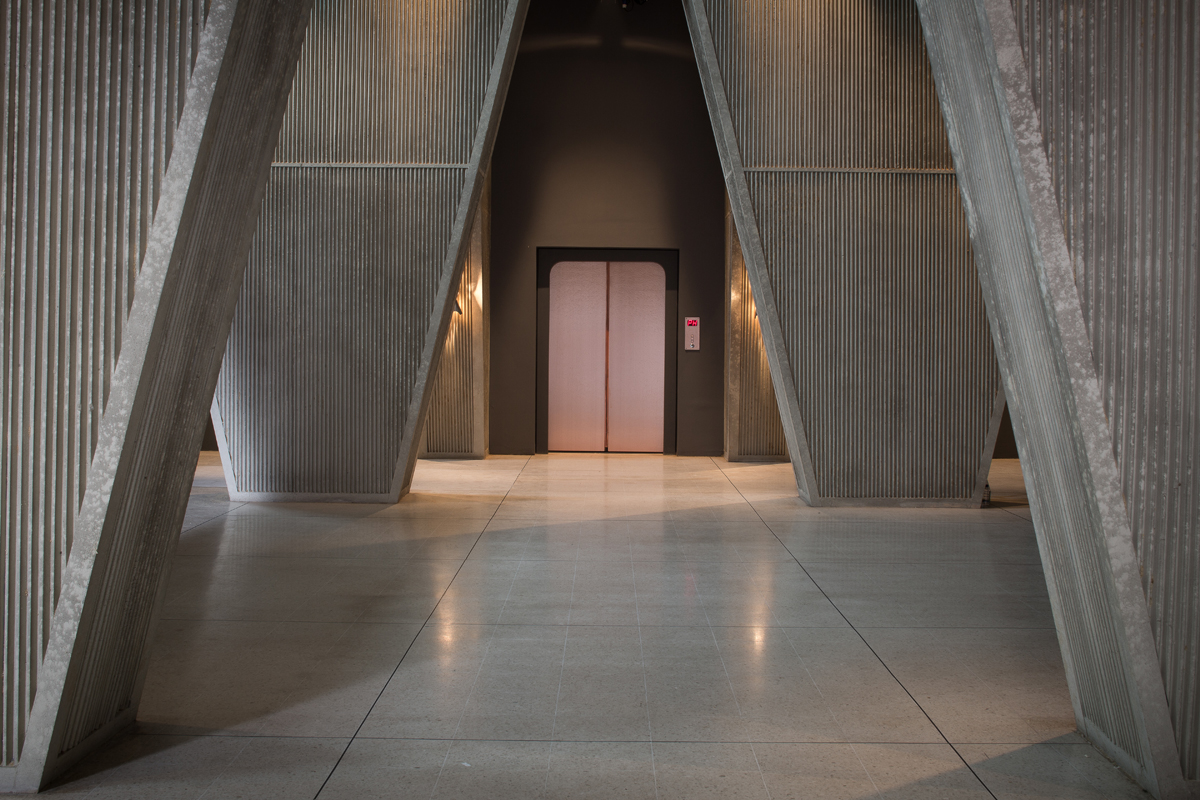 The use of corduroy concrete inside recalls the work of Paul Rudolph.