The noted architect argues for preservationists to look beyond “ageist” conventions to consider the important buildings of our day. 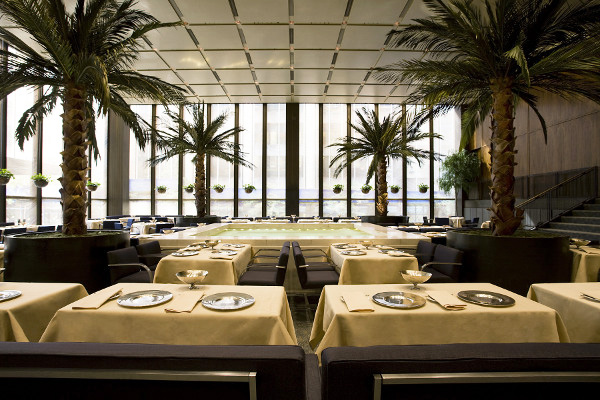 The pool room at the Four Seasons restaurant in New York.

I have successfully made design presentations to nearly every commission chair since the New York City Landmarks Preservation Commission was founded in 1965. (I missed only the opportunity to speak before the first chair, Geoffrey Platt, and have not yet presented before the commission’s current head, Meenakshi Srinivasan.) For the most part, I have found the organization to have always possessed a questioning, intelligent attitude, offering a fair assessment of the issues each landmarking project represents. But when, at certain moments, the commission strays from its role of review and has assumed a zealously interventionist mode, authorizing design alterations rather than hazarding a more sensitive approach, its role exceeds its mandate.

The work of the commission is an ongoing responsibility of each generation, even as tastes change. Criterion changes, too; it is important for the commission not only to identify significant individual structures but also to explain how they respond to or ignore their neighbors. The disappearance of a single building can easily upset a first-rate urban composition, even one achieved completely by accident. Current proposals to set timelines on designation could have serious repercussions on such urban ensembles if they preclude many different architectural periods from consideration.

The commission can duck issues like this by delaying its presentation at a public hearing, as it did with the Huntington Hartford Gallery of Modern Art at Columbus Circle, which was significantly altered in its transition into the Museum of Art and Design. Then there’s the nominating process itself, which, due to aesthetic and “ageist” conventions, tends to limit the range of potential candidates. There is a general mind-set about which buildings are worthy of designation that favors 19th-century masonry buildings. This runs absolutely counter to the idea of diversity that forms the basis of good urbanism. With the designation and reconstruction of Domino Sugar’s great complex for housing in Brooklyn, there is some hope that this discriminatory attitude is changing.

Issues of architectural history may sound trivial to the public, but they are of grave importance if we want to keep our cities from becoming museum pieces.
Until recently, the industrial aesthetic was not considered worthy of architectural appreciation, let alone landmark designation. I hope that the commission’s attitude will also change toward the city’s many valuable Modernist and Late Modernist curtain-wall structures. For too long the commission has disavowed these excellent transparent glass buildings, where outside and inside are one continuous experience. In the near future it will be forced to turn its focus to them, and when it does, it will find some heartening examples. Norman Foster’s deliberate juxtaposition of glass and faceted geometry atop the 1928 Hearst Building suggests a different approach that disrupts our notions of traditional harmony, but which is nonetheless compelling for it. The tower and others like it offer a wide range of best practices in juxtaposing new with old.

Recently, the New York architectural community has been up in arms about the potential loss or alteration of Philip Johnson’s Four Seasons restaurant in the Seagram Building. It was assumed, of course, that the Four Seasons would always be there and a change of use was unlikely in the extreme. But now this landmark interior is threatened instead by a change in tenant, not use. Its survival in the marketplace of restaurants depends upon promoting long-honored design. (And that has as much to do with how it is presented by the media.) After all, the Rainbow Room at 30 Rockefeller Center has had several makeovers but still retains its essential character. The Four Seasons, however, is such a unique design that any changes to it will resonate throughout the place, perhaps causing great aesthetic damage. It could easily be “redecorated” with new fabrics, carpet, and furniture to make it more au courant, but that would destroy a classic. It is better and much more preferable to see it restored to its original, gleaming, simple self.

Beyond Modernism, the Landmark Commission’s next great challenge is clear. Thirty-one years have passed since the AT&T Building (now Sony Tower) was opened, and as the definitive beacon of New York’s Postmodern moment, the skyscraper-with-the-Chippendale-top has signaled a reappreciation of this period. The Postmodern aesthetic is something of an anomaly, because while it harkens back to early-20th-century architectural heavyweights, whose robustly decorated exteriors were among the commission’s earliest designations, the buildings erected in its name seldom rise above caricature. It’s also difficult that the works from this period carry many interpretations, some too esoteric to warrant their exuberant stylings. Intelligent commentary first requires a clear definition of how the “Postmodern” is defined.

These issues of architectural history may sound trivial to the public, but they are of grave importance if we want to keep our cities from becoming museum pieces. The best buildings contribute to their surroundings while punctuating the daily experience of those who encounter them. They deserve to be defended.

Hugh Hardy is a founding partner of H3 Hardy Collaboration Architecture. In his 50-year career, Hardy has been an adamant supporter of preservation in his native city of New York.