In America, A New Religious Architecture on the Rise

We are witnessing the emergence of a new kind of religious architecture within the United States today.

Our West Coast design studios read with interest Jenine Kotob’s piece on “a new Islamic architecture.” Although Kotob focused on a specific religion—one poorly understood in the United States—we believe her thesis is more widely applicable: Architects everywhere should ground religious design ideas in today’s social and environmental challenges. In other words, “every” religion could use a new architecture, and I believe we are watching the emergence of this within the United States today. Admittedly, substantive evidence for this is still a bit like catching the blossoming of a lotus flower: One may need to trek through a dense jungle of misunderstandings and misperceptions to find where these unique blooms are actually unfolding.

In Judaic architecture, for example, sweeping demographic changes in denominational makeups are being reflected in the design of a new breed of “multi-minyan” synagogues accommodating multiple prayer groups, occasionally even conservative and reform worshippers. Examples include Harry Sternfeld’s midcentury classic, the Germantown Jewish Centre in northwest Philadelphia, as well as recent adaptations, like Landau Zinder’s Temple Beth-El in Jersey City.

Additionally, the Catholic church has seen new and modern cathedrals arise in recent decades, including Rafael Moneo’s Cathedral of the Angels in Los Angeles and Richard Meier’s Jubilee Church in Rome. These works may well presage a more insistent break from historicist styles and attitudes. After all, Pope Francis has already sought other progressive measures of reform—like supporting the fight against climate change and elevating Antoni Gaudí to sainthood.

Even Buddhist enclaves in the western states are building poetic, regionally-informed, and humble temples of meditation, which also break from tradition, such as the Bodhi Manda Zen Center near Santa Fe by Hadrian Predock and John Frane. Other examples include the desert sanctuary and Buddhist retreat by Imbue Design in Grover, Utah, and several new projects inspired by the super-green Jetavana in western India, designed by sP+a.

Sustainability has also begun to play a meaningful role in many new religious works. In the Muslim community, as Kotob’s essay usefully illuminates, we see new formal directions and green building concepts informing next-generation mosque and masjid design. The Farm of Peace in Pennsylvania is an instructive and budget-minded example. Like Kotob, my colleague, architect Sami Khoury, also links ecological and sustainable principles to fundamental Islamic teachings: “Conservation inherently counters wasted resources, seen as squandering[…] Savings from a more thoughtful and economic use of resources can be redirected to the common good, and specifically to helping those in need.” According to Khoury, influential examples in this vein include the Eco-Masjid, proposed in Abu Dhabi by Suhail Mohammed Suleiman, and Germany’s wind-turbine minarets by Hamburg architect Selcuk Ünyilmaz. 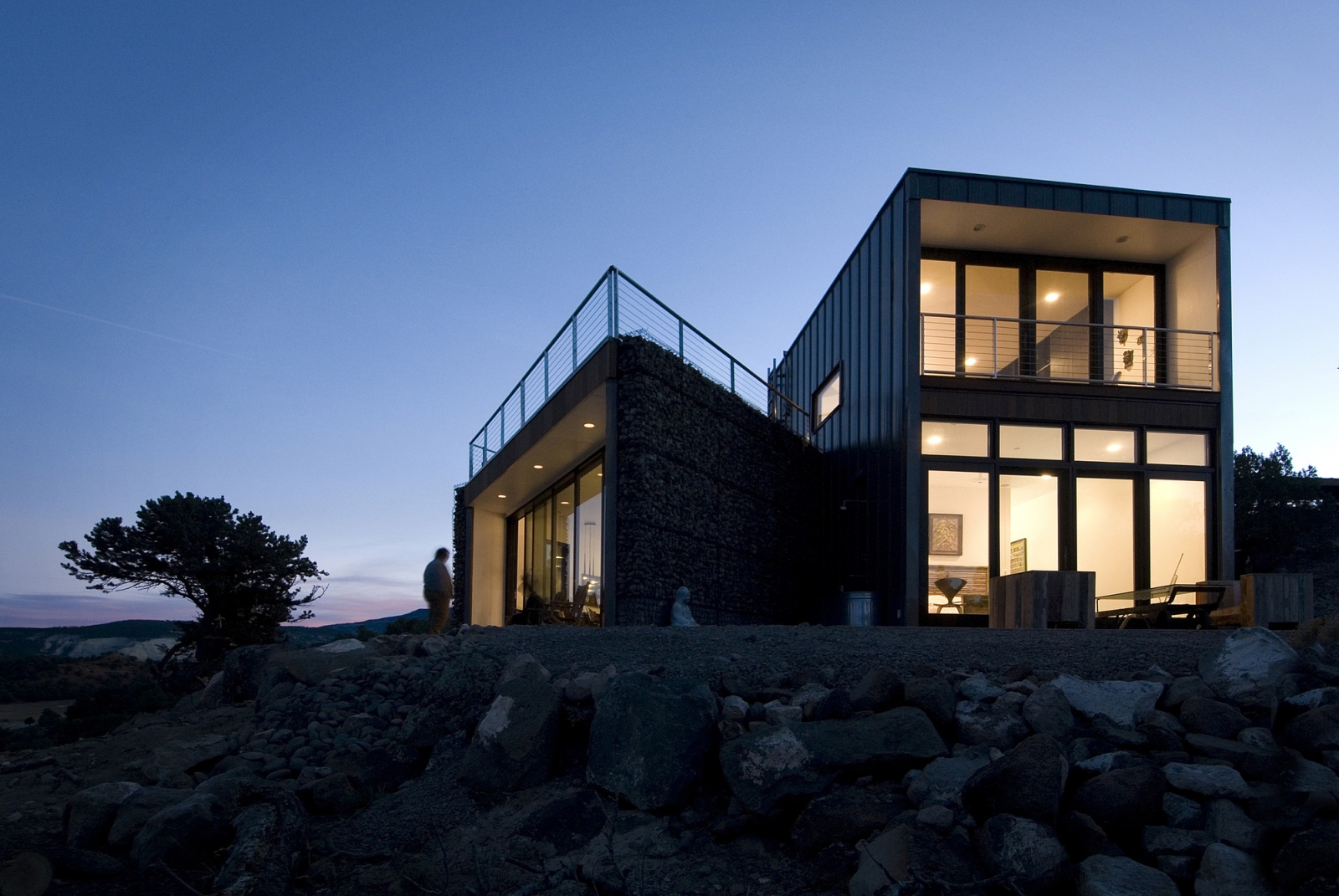 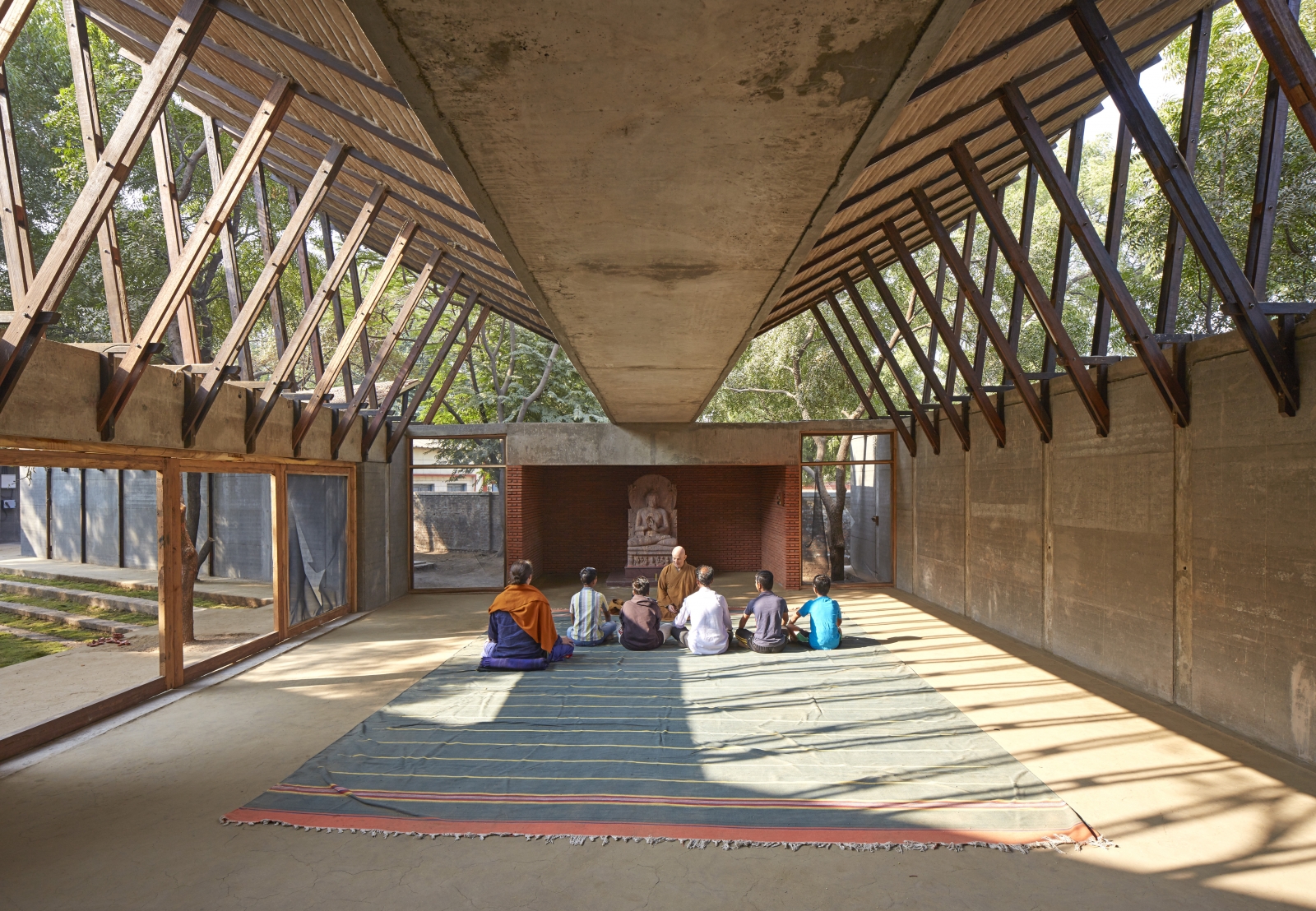 As I’ve discovered in the last few years, an emergent progressive design directive is similarly informing evangelical faith buildings in the United States. A few years ago, my firm and I were commissioned to design a science center for Point Loma Nazarene University (PLNU), a faith-based institution of higher learning near my own home in San Diego. The experience was a personal awakening of a historical, spiritual and aesthetic sort, one which served to upend more than one religious stereotype. The project brought together an array of colorful academic characters (including a poetic zoologist and a globetrotting chemist), a mustard magnate, and a patron of several mannerist, Theosophical-style landmarks. (Please indulge me.)

PLNU’s roots reach back to an 1890s prayer circle of six determined women in early Los Angeles, when the evangelical Holiness Movement swept through the West Coast. By 1919 the prayer circle had evolved to the point where it became Pasadena College, and in 1973 it relocated to San Diego’s Point Loma peninsula.

The peninsula had been home to a Lomaland theosophical commune, which had built a short-lived “White City” utopia on the scenic peninsula cliffs. (Among its highlights: North America’s first Greek amphitheater, amethyst domes, compressed arches, and other clever references to antiquity.) Over time, the theosophists’ notable architectural style became inextricably linked with PLNU’s global mission—an unlikely yet visually delightful pairing. It was there where PLNU cultivated a reputation for both inspiring faith and teaching rigorous science, hand in hand.

Today, the university pursues a balanced dialogue between scientific inquiry and biblical teachings. Evolution and human sexuality, for example, are studied with world-class rigor against a backdrop of spiritual enlightenment.

When we were given the commission for the science center, Kerry Fulcher, the slender and eloquent Idaho-bred biology professor, as well as PLNU’s Provost and academic chief, acted as our personal guide.

A kind of poet muse, Fulcher set our architectural challenge in both practical and metaphorical terms, unveiling the school’s mission for the new millennium. Undergraduates must take at least one lab class, and 40 percent choose STEM majors. Moreover, 9 of every 10 PLNU students applying to medical schools are accepted. Echoing the women’s prayer circle that kick-started this institution, even a century later, 7 of 10 students, and more than half the science faculty, are women. But the school’s success in the science majors had reached a tipping point. More labs and classrooms were needed, and a more visible and committed gesture seemed warranted to practically and symbolically stress the importance of the scientific disciplines at this Christian university. 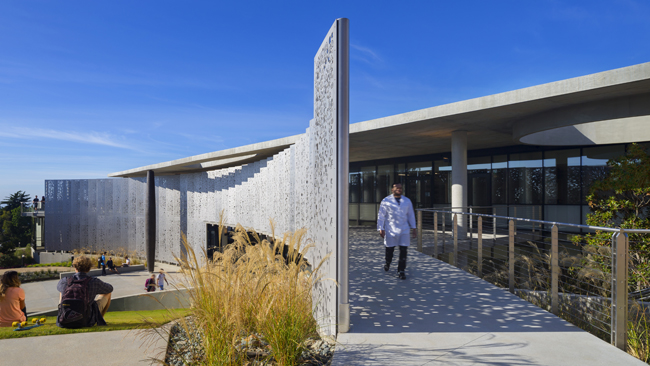 This year, Point Loma Nazarene University moved into its large, modern and unusually lyrical science center, a major investment and milestone some 20 years in the making. Sited just beyond the Greek amphitheater, the university’s 13 new labs are wrapped in a modern palette of unfussy glass and smooth poured in-place concrete, fully equipped for biology and chemistry classes. On its south side is a compelling and shimmering feathered curve. The 66 glistening, perforated stainless-steel panels extend in a gentle sweep that reaches out and hugs the space around it, welcoming students to a new campus exterior room and allowing them to lounge outside on low walls or the newly planted, grassy slope. Conceived for shade, the metal panels are waterjet-cut with the Greek letters alpha and omega, symbols equitably laden with religious and scientific allusions. Light streams through this south facing wall, not unlike the stained glass walls of a cathedral.

But Fulcher sees more. “This solar feature,” as he calls the metal screen, “conveys both the value and the limitations of science in the world where our graduates will live and work. The light and shadows in the space in between the screen and the building itself creates a dynamic liminal.” He goes on to add, upping the ante, that “a transition space that symbolizes mystery and overlapping boundaries between what is known and what is unknown…that unusual continuum representing Faith and Science.”

The science center at PLNU offers yet another example of the promising movements in religious-based architecture happening across the United States. These are progressive design solutions rooted in real and current social needs as well as environmental challenges. The results take ecclesiastical architecture far beyond their roots, and for good reason—life in pluralistic and democratic places, grounded in tolerance, are wellsprings of unique ideas.

The notion of uniting faith, architecture, and science in a meaningful, contemporary, and experiential way, as we did for PLNU, has allowed me a glimpse of that blossoming lotus. I believe that, in the near future, we will see new and innovative forms that not only merge objective learning, prayer, and symbolism, but that are truly worthy of our nation’s diverse belief systems. 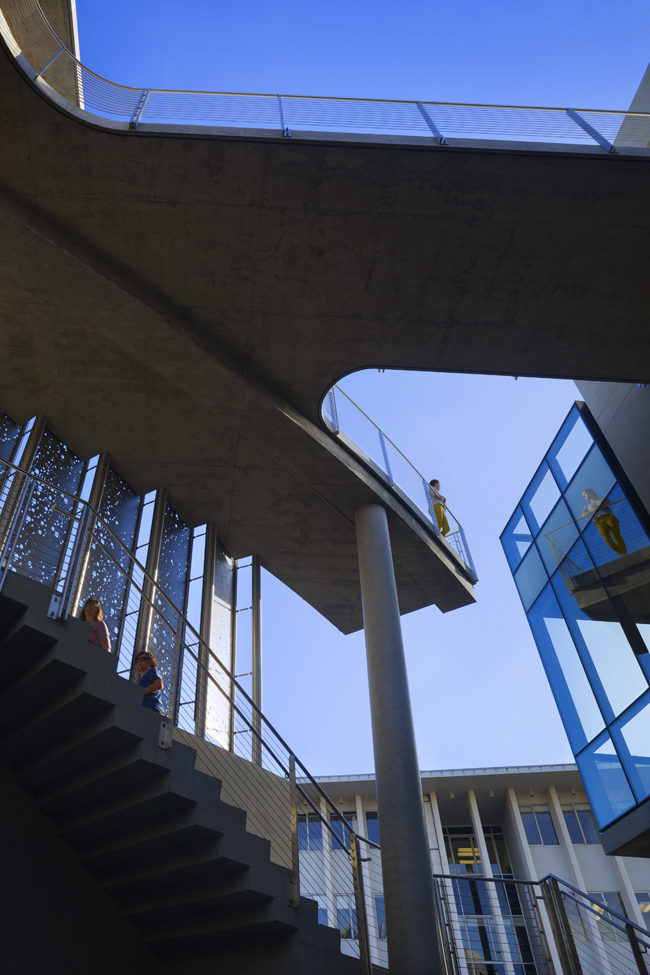 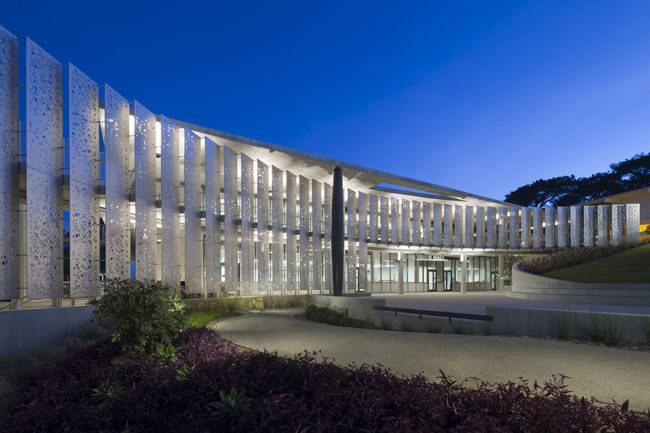