Engineering and design must become core elements of our schools’ curricula. 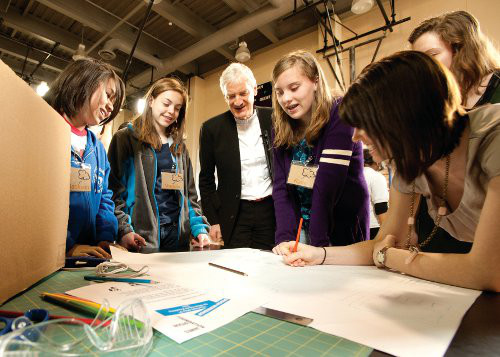 The James Dyson Foundation “encourages young people to think differently, make mistakes, and invent.” The legendary inventor is shown here at the launch event, leading students in a design workshop.

Design is not conceptual. Design means getting your hands dirty. It is about having an idea, making it, and then testing it to see how well it works. Most of the time, it will not work. Truly brilliant design, engineered by the likes of a Soichiro Honda or Thomas Edison, involves a lot of failure, but also a lot of perseverance.

Here are two pieces of good news. One: This ability to try, fail, learn, try again (and perhaps even fail again) can be nurtured, even taught. Two: Children are particularly good problem solvers. They are not burdened by experience—years of learning the “right” and “wrong” ways. Experience doesn’t help you discover what might work in the future. For that you need inspiration, along with a willingness to fail. Children are unhindered by the impossible (not so different from the best engineers or designers, who take a problem, look at it in new ways, and set out to solve it).

Good ideas and inventions are borne of frustration. And there is no group more frustrated than prepubescent youths. They know how to spot a problem; the trick is to turn an errant complainer into someone hungry to solve it. Now, if children are so naturally inclined to think like engineers, where are all of the engineers? In the United States, fewer than five percent of college students graduate with engineering degrees. The problem is just as acute in the United Kingdom, where my company struggles to find the engineers we need to invent new technologies. The problem in both countries lies with education.

Engineering education must start young, with gutsy children still filled with imagination. Once a student reaches high school, too often their course is set. Lawyers, marketers, businesspeople in suits: society needs these professions. But without engineers, inventors, and designers there is nothing to patent, market, or sell. Ideas and invention are the foundation upon which an economy grows.

Engineering and design are exciting fields. But in the U.S. they are treated as extracurricular add-ons (if they’re taught at all)—afterthoughts to math and science. America’s proposed Next Generation Science Standards would mandate the teaching of engineering, but only as a small part of a larger science curriculum. Engineering and design propel the principles of math and science into action, and deserves pride of place alongside disciplines such as biology, chemistry, and physics. Engineering must become the fourth science in American education.

My organization, the James Dyson Foundation, runs after-school engineering clubs in Chicago that engage children with practical projects. They learn the design process by sketching, building prototypes, and testing their solutions to problems such as crammed lockers, pesky bugs, or how to make their chores simpler. The exercises seem basic, but the ideas are surprising and unconventional. One group of students set out to improve upon the backpack. They wanted to design it to be wearable, but also double as a roller bag. In their prototyping, they discovered that wheels add weight, so they invented a trigger that would allow the wheels to be removed when the bag was worn. The students emerged from their read-and-repeat shells—and instead they built and tested, solving problems.

At Dyson we have 1,500 scrappy, young, bright thinkers who are taught to come up with an idea, prototype it, test its performance, and then push it to destruction. If it breaks, all the better. They know what to change in the next iteration. And there will be many, we tell them, often thousands. This fundamental principle should be taught in school: You will (you should) fail. Success is taking that failure and turning it to your advantage, learning from the experience, and seeking another path.

Why, I wonder, is failure something many teachers try to subvert? Children are often taught to fear failure. Making mistakes is how we learn. Each failure is an opportunity to evaluate and reapproach a challenge with a new idea. Students should be rewarded for each mistake they make (and learn from!).

My own career was founded on failure. It took 5,127 prototypes to get my first vacuum right. And in the 20 years since, we have continued to improve upon it. Efficient digital motors replaced bulky conventional ones. Fixed wheels were traded in for a maneuverable ball. Cyclone technology was honed even further, removing more dust and dirt. It is a ceaseless process—and that was just one invention. 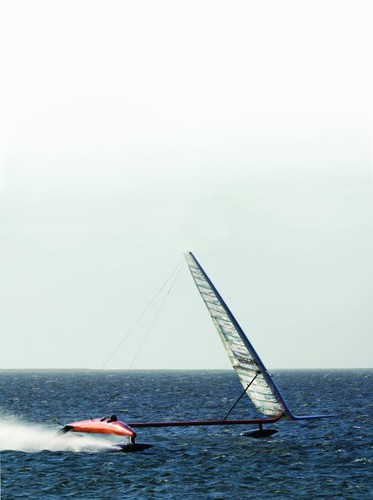 Paul Larsen’s Vestas SailRocket 2 (left) is another example of failure and perseverance. His boat (more like a plane-boat hybrid) is the result of years of ideation, sweat, and failure. The basic design for his boat was conceived in the 1960s by a rocket engineer. It was created for speed, but even the designer could not fathom a sailboat holding together at speeds of more than 40 knots. The existing materials simply would not withstand it. Fast-forward 50 years: Larsen posits that modern materials such as carbon fiber may enable it to stand up against the brutal airspeeds.

He was right, but it would take him years to crack it. Larsen experimented with different materials, shapes, and sizes. He called in expert hydrodynamicists. They abandoned him, believing his idea impossible. The resulting design was a revolutionary watercraft that made even the most advanced (and expensive) boats seem archaic. Combining the designs of a rocket engineer with the vision of a dogged technician (and the right modern materials), propelled the Vestas SailRocket 2 into the record books: 65.45 knots. Great ideas are not bound by current practicalities.

Whether it is melting ice caps, gas-guzzling cars, or crowded lockers, there are infinitely more problems than engineers to solve them. We must ignite students’ natural curiosity and fan the flames of engineering and design ingenuity. That begins with a commitment in education and should be fostered by our attitude toward the profession. The U.S. economy is built upon ideas. It will need many more of them in the coming years.