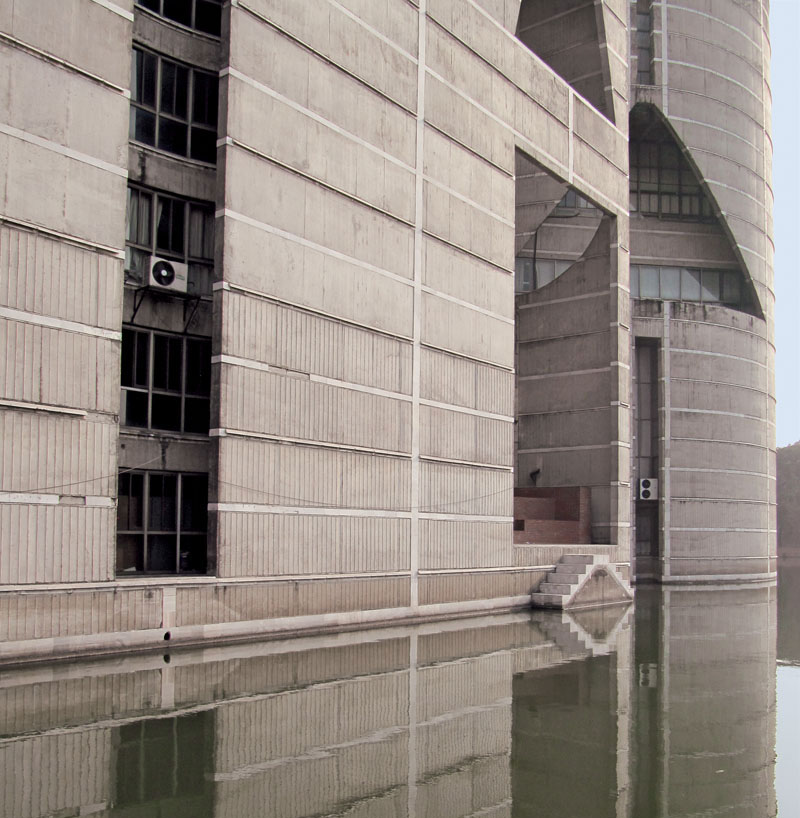 Nearly every aspect of Louis I. Kahn’s career—from his draining work method and perfectionism to his furtive private life—has been parsed, documented, and commented on. Two new volumes offer an exhaustive analysis on what seems a well-trodden facet of the Kahnian canon—the architect’s use of concrete.

Though he may have spoken to bricks, Louis I. Kahn really “discovered” the true nature of concrete—the exposed reinforced kind, to be precise—and charmed it into the building blocks of his architecture. The affinity for what he would later call “molten stone” was, in part, an acknowledgement of personal failings. Steel, he freely admitted, was better served by contemporaries such as Mies van der Rohe. So much so for the flexible free plan, that modernist shibboleth which Kahn could never quite square in his work, despite his best attempts to dutifully apply the teachings of his mentor Le Corbusier.

The French master figures centrally in Kahn’s canon. As the progenitor of the aesthetics of béton brut, Le Corbusier’s late work signalled to the Philadelphia architect a way out of humdrum American modernism, which oscillated between the cheap standardization of housing blocks and a more exalted seriality of wide-paned glass and tailored steel. This, coupled with the contemporaneous “New Brutalist” movement then sweeping the U.K., provides the context for the architect’s creative pivot in the 1950s and for two new volumes dedicated to his highly idiosyncratic use of concrete.

The first of these, Louis I. Kahn: Exposed Concrete and Hollow Stones, 1949-1959 (EPFL Press, 2014), written by Roberto Gargiani, identifies the catalysts that sparked Kahn’s reevaluation of Modernist axioms —initially, through the 1944 theoretical proposition Monumentality, with its praise for “tubular forms” and calls for a complete erasure of traditional tectonics. These would be the basis of the new spirited civic architecture that Kahn, following the historian Sigfried Giedion, envisaged for the second half of the twentieth century. His subsequent exposure to Le Corbusier’s late works, as at Marseille, complicated this idealism. The artistic thrust of the Unité d’Habitation (completed in 1952), whose coarse béton brut was stamped with the striations of its floorboard formwork, affirmed the “lack of continuity in reinforced concrete construction.”

These two impulses—the restoration of neoclassical presence through technologist expression, on the one hand, and the concrete-as-sculptor’s-putty on the other—were synthesized by Kahn in the conflicted design of the Yale Art Gallery (1953). There, Kahn first realized his concept of “hollow stones,” a kind of cross between Buckminster Fuller-like space frames and Unité-style concrete work.

The concrete at Yale had been poured in place, an operation greatly problematized by the tetrahedral (pyramids with a triangular base) geometry. As Gargiani reveals, the contractors at Yale had openly criticized the “out-datedness” of the concrete work, which fussily employed puny floorboards in the Corbusian mode (broad sheets of plywood were the American standard). In reaction to these criticisms, Kahn would move toward smoother and smoother concrete surfaces, as at the Richards Laboratories (1960), where he reluctantly killed his tetrahedral darlings and the inevitable pouring complications they entailed, opting instead for simpler precast Vierendeel trusses. 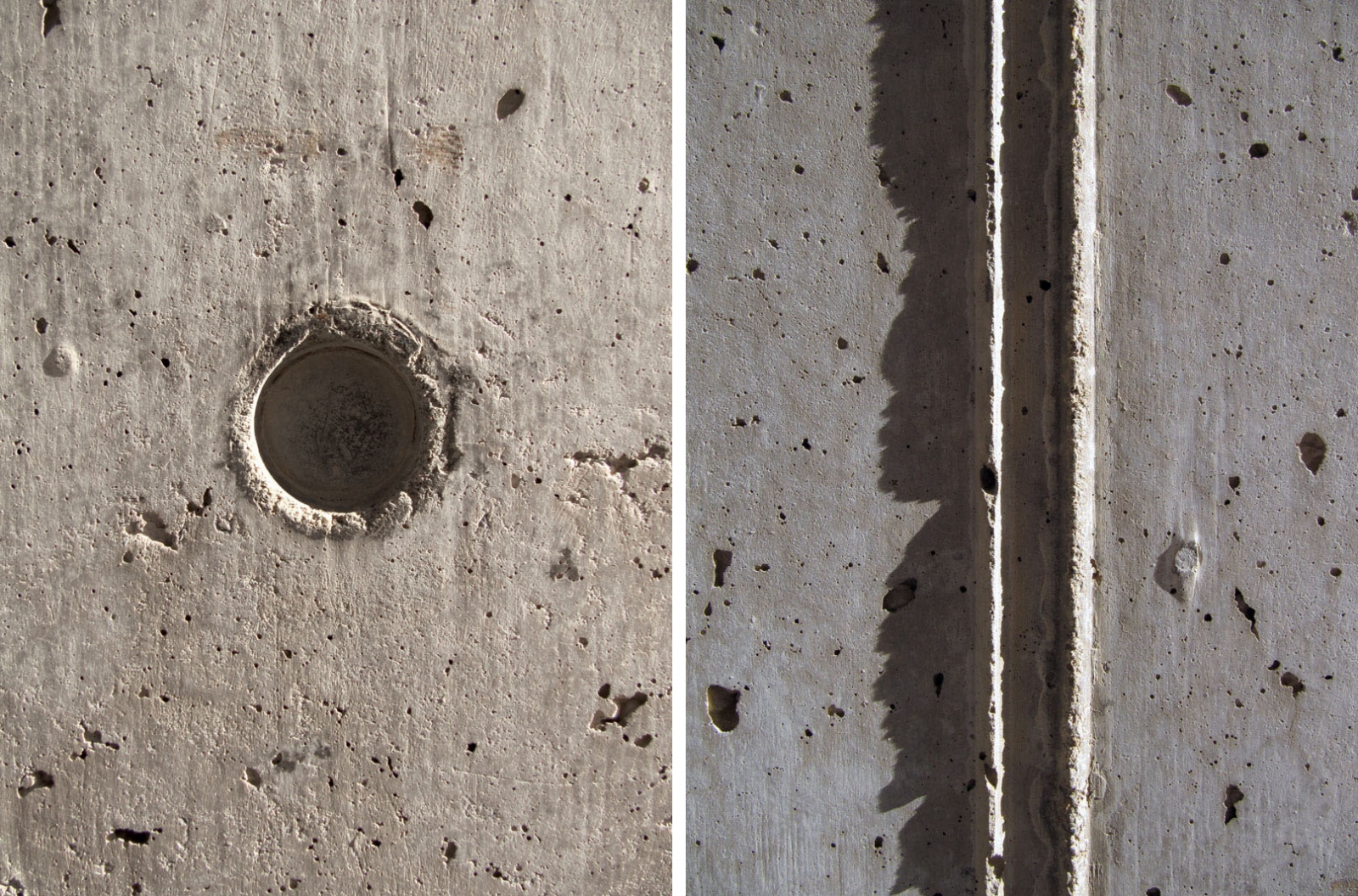 Kahn’s increasing desire “to start to control the whole formwork system, to achieve a new American type of architectural concrete” is Gargiani’s most piercing insight, and it suffuses Anna Rosellini’s accompanying (and much larger) volume, Towards the Zero Degree of Concrete, 1960-1974 (EPFL Press, 2014). With the Salk Institute for Biological Studies in La Jolla, California (1965), Kahn began to “erase the decorativist aspects of béton brut,” Rosellini writes of the architect’s radical handling of concrete. This assault on ornament bears little connection to Adolf Loos’s apodictic tirades on molded surfaces everywhere, or to Modernism’s militant tradition of abstraction. Rather, by purging his concrete of affectations, Kahn invited deeper inspection into the material’s true, inimitable nature.

This, for Roselinni, marks a watershed moment, both in Kahn’s career and the architectural profession. It is in the protracted early construction stages at Salk that Kahn, frustrated with the inconsistent and often artless concrete pourings on site, “lays claim” to what had perennially been the domain of worksite contractors—the design of the formwork. Had Kahn’s frequent collaborator and formwork specialist Fredrick Langford not intervened, this virtual Brumaire may have quickly been overturned. To better convey the architect’s seemingly arbitrary aims, Langford produced a letter addressed to the workmen—really, a polemic masquerading as a construction bulletin—spelling out the precise manner in which Kahn’s concrete should be rendered. The prescribed construction plan, with its room for exploratory casting methods, proposed “a persuasive rehabilitation of the role of the craftsman,” close to a medieval workshop. 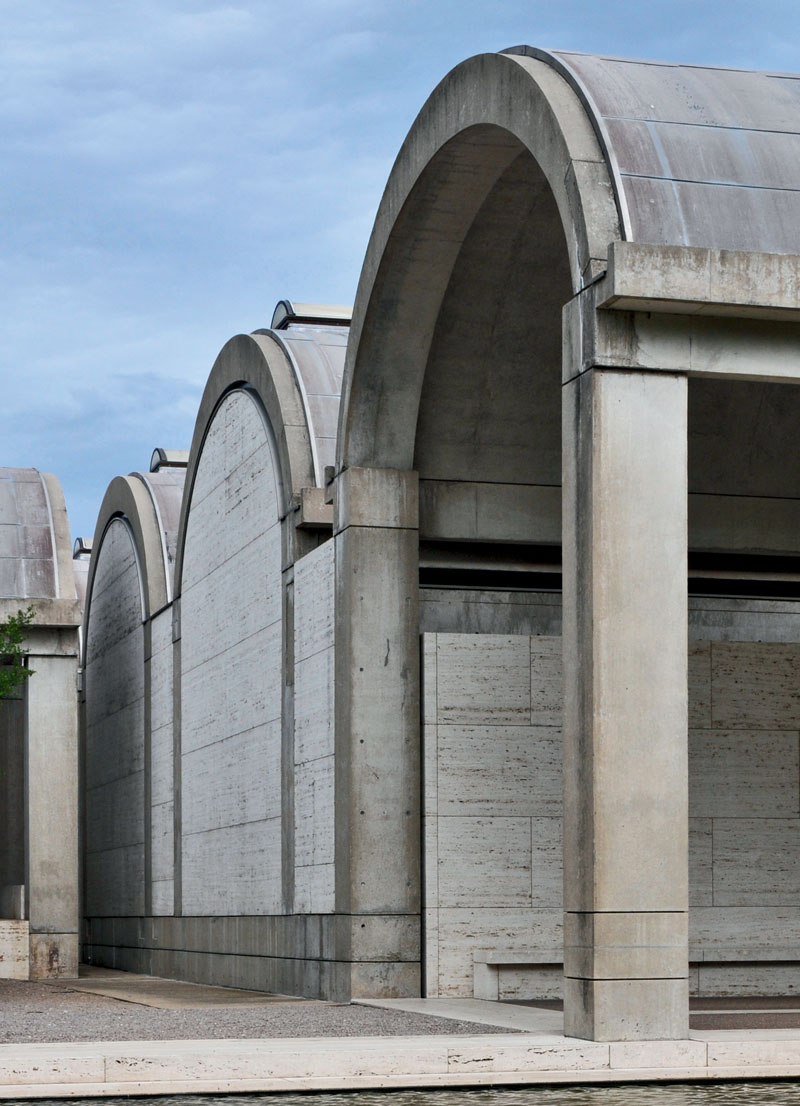 With Salk and the Kimbell Art Museum in Fort Worth, Texas, Kahn perfected the methods for producing “architectural concrete.”

The analogy is fitting, and one of the more vivid parallels drawn by the authors, whose writing can be dully generic, to the point of being interchangeable. (The pair previously co-authored a study on Le Corbusier.) In their attempt to situate Kahn’s developing attitudes toward concrete, both fail to make any of their comparisons to modern art stick. (Joseph Albers, Jasper Johns, Jackson Pollock, Yves Klein, and the sculptor Mon Levinson, among several others, are all namechecked.) Their respective expositories are also peppered with a few embarrassing speculations, such as when Roselinni earnestly suggests Kahn’s facial scars (from a childhood accident) were sublimated in his mature kinship with exposed concrete. The pacing of the books, too, can grow repetitive, and large swathes of text—whose drama chiefly revolves around quarreling contractors or Kahn’s perpetual irritation with workers’ unsolicited attempts to futz with his exposed concrete—require a good deal of willpower to get through. Passages on, say, the painstaking reverse-engineering Salk’s successful concrete production at the National Assembly (1962-83) in Dhaka, unfold with the excitement of plaster drying.

Where previous Kahnian literature, like Thomas Leslie’s succinct, but smart Louis I. Kahn: Building Art, Building Science, or Sarah Williams Goldhagen’s revisionist portrait Louis Kahn’s Situated Modernism, devotes a few paragraphs or a chapter subsection to these episodes of the architect’s career, Gargiani and Roselinni draw out many of the same insights, anecdotes, and marginalia over a hundred pages or more. The comprehensiveness of the research is naturally evident, and the books are filled with fascinating archival materials, including dozens of Kahn’s working construction drawings. In the end, they reveal a man prone to constant emendation, whose failings, and acute understanding of them, informed a truly monumental body of work.