Kenneth Frampton on the Art & Artifice of Architectural Models

For decades, students at Columbia University’s GSAPP have, under the watchful eye of Kenneth Frampton, made models of some of the most significant buildings of the 20th century. This Thursday, they’ll be on display.

For decades, students at Columbia University’s Graduate School of Architecture, Planning, & Preservation signed up for Kenneth Frampton’s legendary class, Studies in Tectonic Culture. The course tasked students with creating realistic representations of buildings “as a pedagogical exploration of the history of architectural tectonics”—and the models long spilled into the hallways of the architecture school before being hidden away in the archives.

Now, the Arthur Ross Architecture Gallery, has decided to pull some of these models out from obscurity and display them in a whole new light for the show The Stagecraft: Models and Photos, opening this Thursday. Produced during the 1990s and early 2000s, the models are of significant 20th-century buildings around the world, from Frank Lloyd Wright’s Samuel Freeman House to Peter Zumthor’s St. Benedictine Chapel.

The gallery also commissioned award-winning photographer James Ewing to photograph the models, in a bid to explore the inextricable link between the architectural model and the photograph that depicts it. For Ewing, the photographs were not made to “replicate…or reproduce [the models, but rather] create an illustration of them, an idealized view that is different from the model itself.”

Preview the exhibit below through six featured images that will be on display; each photograph is accompanied by an explanatory quote from Kenneth Frampton and James Ewing. Enjoy! 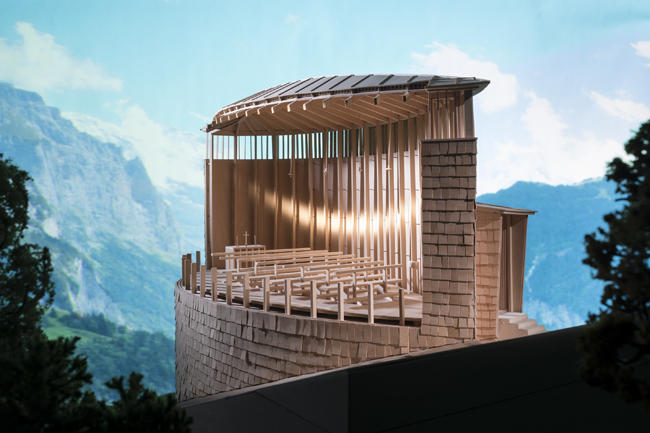 “It’s an amazing little building, isn’t it? The interior space of the building is great. It’s just extremely simple. It’s covered in shingles and the walls and floor are timber, too. Everything is wood except for the roof, which is metal. The students could have made a metal roof, but there is something discreet about making the whole model out of wood. The craft difference between the metal of roof and the character of the shingles is really so beautifully handled. If they’d done the roof in metal, then they would have fallen into a trap: the shingles would not seem real enough.” —Kenneth Frampton

“I played around with projected backgrounds, using a trick I learned from looking at Balthazar Korab’s process shots. Korab was a photographer who trained as an architect and who worked for Le Corbusier, and later for Eero Saarinen. He photographed models in Saarinen’s studio before starting his own photography practice. For one of the Zumthor shots, there is Mylar on the floor and a blue gel on the light, which creates reflected patterns that you can stylize and that give a bit of texture to the background without distracting your eye from the model. It creates a manufactured sky. Just like architecture, styles go in and out of fashion in model photography. In the ‘90s it was popular to photograph models against a black background so that they seemed to exist in a void. But from my research, I found that this type of simulated sky was popular in the ‘50s and ‘60s.” —James Ewing 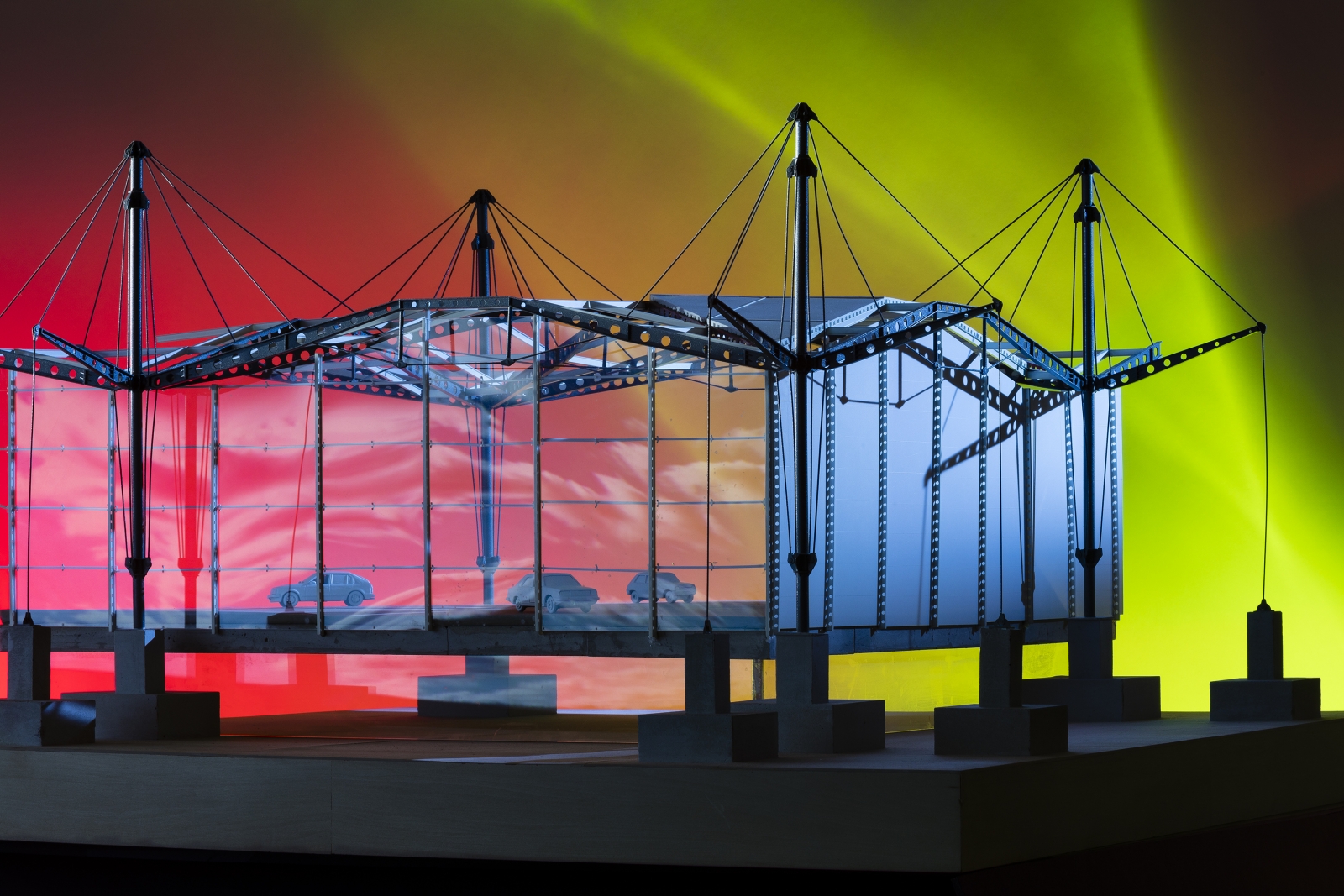 “Part of my philosophy is that you have to provide room for creative play. To get good work you need to be able to experiment and try new things. Things got really psychedelic with the Foster model—with lens flares, crazy colors, multiple shadows and reflections. I also played around by including the edges of the background projection, framing it in rather than cropping it in. All these photographs oscillate between making something look real and making something look unreal. None of these models look real, and they weren’t designed to, but they’re remarkably accurate in some aspects. I tried to flatter the models, but I’m not trying to replicate them or reproduce them in a photograph. I’m trying to create an illustration of them, an idealized view that is very different from the model itself.” —James Ewing

“The model of Foster’s Renault Distribution Center is obviously not a realistic model. It doesn’t intend to be. But it does exemplify the construction and the ingenuity of the purlins, which are sort of woven into this cage. It’s just extraordinary. If the model makers had included a full roof over it, you would miss the full brilliance of the work technically. The whole point of the tectonic is a combination of the poetic and technical dimension, at one and the same time. I think this model is particularly didactic in this way.” —Kenneth Frampton 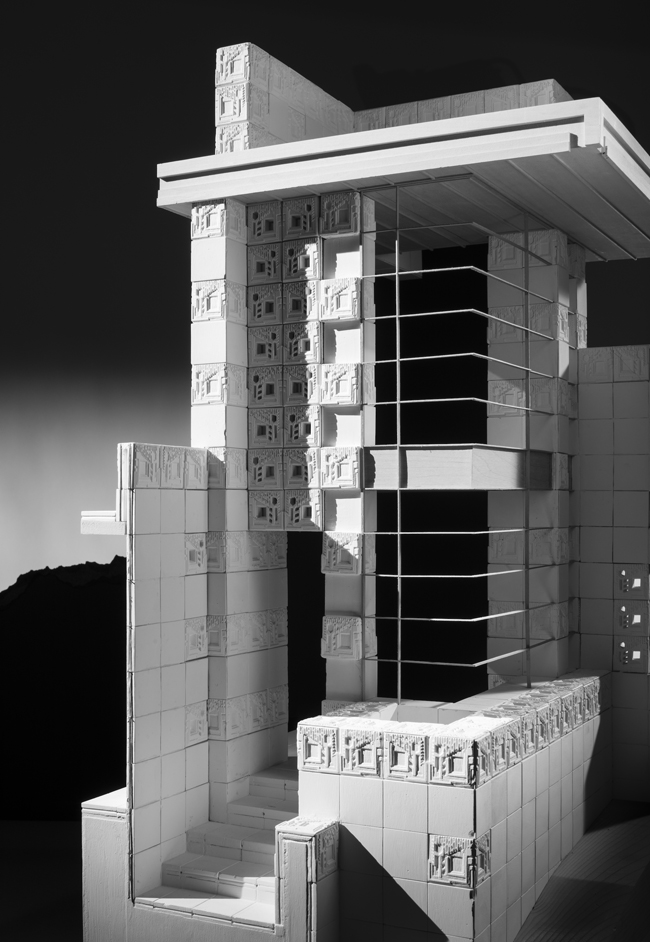 “How do you mutually represent the different materials involved in the building and in the model? That is how does one differentiate between metal, wood, concrete, textile blocks, so on? It becomes a question of relative sensitivity. And actually one of the most amazing models in this regard is the corner detail of Frank Lloyd Wright’s Freeman House in LA. There is a deliberate dematerialization of the textile block at the corner. In this the students made the textile block from rubber molds and then cast the blocks in plaster. The metal fenestration, however, in this case was represented by a very thin wood. So one is really reading plaster against wood and glass, and in fact, they elected not to show the glass; they simply left it as void.” —Kenneth Frampton

“Because the house is in the Hollywood Hills, it’s got those fabulous views of LA. That’s why I wanted to use this backdrop. It’s almost an interior, but not quite—because we’re seeing the outside of the building and the floor plates. So it gives you the sense of being inside the room, looking out, and then also reminds you that you’re looking at a section wall. The important thing about the Frank Lloyd Wright model is that, unlike the others, it’s a corner of the building—it’s like a piece of cake that’s been cut. The aim was to find a camera position that describes enough of the building that you could imagine and complete it in your mind—but still always showing the edges. I’m not trying to fool you or pretend it’s not a sectional model. I’m trying to give you just enough of the model so that you can imagine that it’s a real building.” —James Ewing

“One of the difficult problems for Utzon was the membrane between the earthwork and the roofwork. But he solves it, more easily in the Bagsværd Church than in the Sydney Opera House. What is very interesting here is what is or is not rational in relation to structure. If by rational one means economic, then the span over the nave is such that it could have been built in steel. But Utzon wanted a true shell of concrete. This membrane, floating between the earthwork and the roofwork, was a preoccupation of his. So, there is a kind of poetic reasoning. It is not an irrational building.” —Kenneth Frampton

“This building is really extraordinary in section. I think it should always be viewed this way. Only then is the negative space between the interior curve and exterior form visible. This is the first time I’ve photographed models in section—and that changes the approach immediately. In a closed model you might treat the building like a rendering and try to show a pedestrian’s viewpoint of the actual building. The sectional model changes that; you’re really photographing an illustration of the building. The photograph is like an illustration of an illustration.” —James Ewing 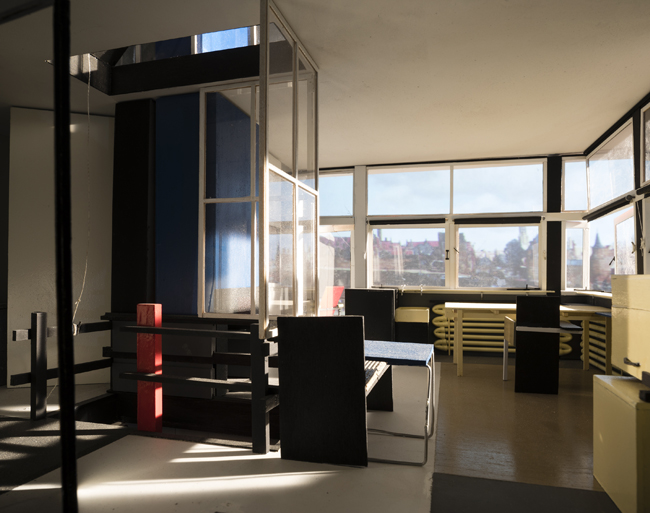 “Photographing models is an exercise in still-life, in the arrangement of objects. There’s a technique in Dutch still-life painting: to have an object, like a knife, peeking over the edge of the table toward the viewer. We did the same thing with this model. But I also saw an opportunity in this model that wasn’t there in any of the others. It is a furnished interior, just big enough to fit the camera inside. The radiator, the window shades, and the water faucets are all modeled. There is a fantastic struggle for detail in this model. It’s almost distracting. I approached this model the same way I would photograph a full-size interior. In interior photography, it’s important to leave enough space in the image for the viewer to imagine moving through it. You end up spending a lot of time moving things around, taking furniture out of a room. That is how the iconic Rietveld chair ended up on the terrace.” —James Ewing

“In a certain sense I still believe that building buildings is a craft operation. Despite the fact that you can rationalize it. Somehow this reminds me of the fact that up until 1968, students entering the architecture school at the Royal Danish Academy of the Arts in Copenhagen had to do a one-year apprenticeship as a carpenter. The student revolt of ’68 got rid of all of that, but I still think that the act of drawing and the act of making a model is in the last analysis a kind of micro-craft experience. It’s not directly applicable, but it gives you a certain respect for the making of anything with your hands as opposed to a distanced intervention via a machine. I’m teaching respect, respect for what people have made and why they have made it in a particular way.” —Kenneth Frampton 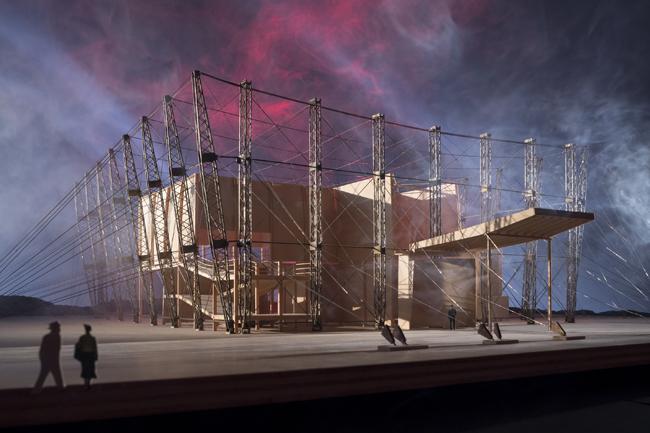 “I found a great historical image of the 1937 Exposition in Paris that described the Pavillon des Temps Nouveaux and its tectonics. I used it as a starting point. The model doesn’t have the original building’s tent membrane—the skin. So color became a tool to recreate the original photograph’s composition. I lit the cables with blue light and made the sky yellow to achieve maximum contrast and similar shadows. The scale of the building is rather abstract, so I used cutout scale figures from period photos of the building—something Balthazar Korab often did in his photographs of models. For another shot, I used a smoke machine—for the first time. I wasn’t sure if the smoke was going to hover over the floor or billow up to the ceiling. It looked really cool right away and added a new element to the image. We put some crazy music on the stereo and cranked it up. We put a red light behind the model, shining up, to hit the smoke. The smoke becomes a stand-in for the fabric that’s missing in the model, an ethereal part of the building that would have moved with the wind.” —James Ewing

“The models couldn’t be realistic. They had to be didactic in order to overcome the picturesque and the decorative. A tectonic model must be expressive of its intrinsic structure by way of the way it’s made. The tectonic is an expressive culture of construction, and because it’s an expressive culture, it always involves revealing and concealing. So then what you choose to reveal and what you choose to conceal are part of its poetics.” —Kenneth Frampton​

The Stagecraft: Models and Photos will be on display at The Arthur Ross Architecture Gallery from February 9 until March 10, 2017.