Lions and tigers and bears! Oh my! Oh wait..they’re fake.

The Harvard Design Magazine Readers series can usually be counted on for lucid, readable discussions of contemporary design issues, and its latest title is no exception. Nature, Landscape, and Building for Sustainability, released last month, collects 15 short essays from the magazine, casting a keen and critical eye on a topic that is all too often mired in fuzzy thinking and marketing hype.

Several of the essays offer pragmatic advice for effective ecological design, while others frame the issue more broadly. Perhaps the most entertaining of the bunch is John Beardsley’s 2000 piece, “Kiss Nature Goodbye: Marketing the Great Outdoors,” which can also be read online for free. Beardsley, a senior lecturer in the Harvard Graduate School of Design’s landscape-architecture department, takes us on a brief tour of “the not entirely entertaining, but not really educational, simulated ‘natural’ attraction.” Examples include UnderWater World at the Mall of America, Sea World, and Rainforest Café. 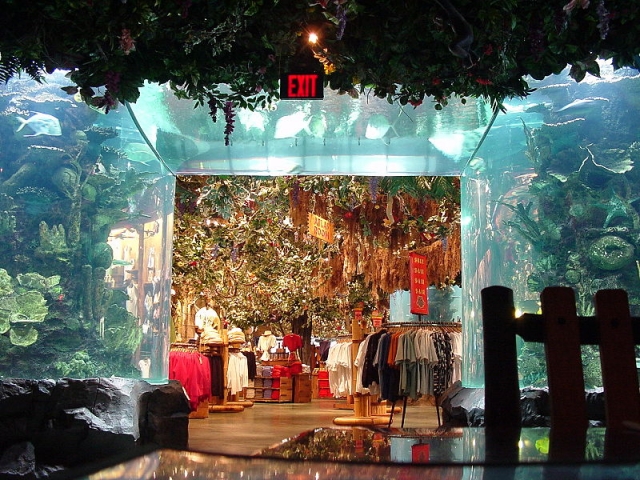 Rainforest Café is, Beardsley writes, “the best place to experience our confusion about nature and to begin to understand what we ought to do about it.”

For the latter, Beardsley provides some amusing history:
The brainchild of Steven Schussler, an entrepreneur with experience in advertising and restaurants, the concept was developed over some seventeen years. For a while, it existed as a prototype inside Schussler’s home in St. Louis Park, Minnesota. Schussler had parrots, toucans, tortoises, an iguana, and a diaper-clad baboon; he claims that his wish to give these pets a cageless environment was what inspired Rainforest Café.
That’s great—except that most of the animals at Rainforest Café are fake. Audio-Animatronic butterflies, iguanas, giraffes, gorillas, and elephants awkwardly mime the real thing, with a few actual macaws and cockatoos thrown in for a dose of authenticity. That the animals are also wildly misplaced—sorry, kids, zebras and elephants don’t live in the rainforest—adds to the muddle. “As if that were not confusing enough,” Beardsley continues, “the place features a talking banyan tree named Tracy, who delivers the ultimate mind bender: at intervals she mouths exhortations to ‘reduce, reuse, and recycle,’ while at other intervals she urges us to try the tasty food or buy the themed merchandise.” (You can get a taste of how creepy Tracy is with this short video.) 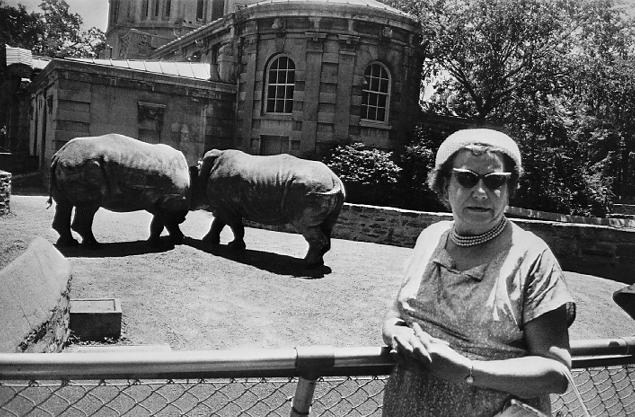 Garry Winogrand, from The Animals

Reading Beardsley’s essay, I was reminded of Garry Winogrand’s 1960s photos of New York City zoos, collected in The Animals. Winogrand captured caged animals and gawking visitors in humorous and mildly unsettling pairs; often you are forced to wonder who is the more intelligent and dignified creature. As John Szarkowski wrote of the series, “It is a surreal Disneyland where unlikely human beings and jaded careerist animals stare at each other through bars, exhibiting bad manners and a mutual failure to recognize their own ludicrous predicaments.”

Rainforest Café and its ilk point to a similarly ludicrous situation: a culture that seems to believe it can consume and conserve at the same time, without any meaningful sacrifices—and that, as Beardsley writes, “our transactions with nature can invariably be safe, agreeable, and problem-free.”