Green Team #29 investigates the feasibility of bringing the city’s erstwhile oyster population back to life.

Above and below courtesy Mathew Nielsen

In our last post, we examined the challenges inherent in designing in the literal shadow of the High Line, a project that continues to influence that part of New York City. Now, we look at design in the aftermath of an even more transformative force—Hurricane Sandy. Since the hurricane struck New York in 2012, the city’s waterfront design discussions have focused on ideas of resiliency and planning for storm events. The recent Rebuild by Design competition sponsored by the U.S. Department of Housing and Urban Development (HUD) and the Presidential Hurricane Sandy Rebuilding Task Force, featured six winning proposals that all envisioned a beefed-up Manhattan shoreline capable of handling large storm events and other hazards effects of climate change. Of the handful of ambitious designs, Scape/Landscape Architecture’s Living Breakwaters plan was the most interesting: the project called for the reestablishment of New York’s erstwhile oyster reefs, which the architects said would improve local ecology. 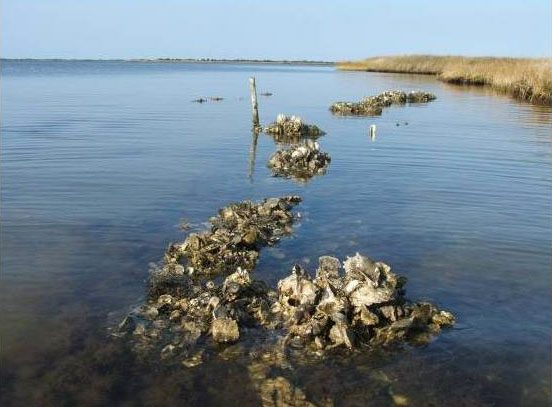 A typical oyster reef along the coast of North Carolina

At one time, New York Harbor was home to a network of long established oyster reefs. In addition to being a popular food source for Native Americans and indiginous marine life, the oysters played a critical role in the health of our rivers. According to NOAA, oysters improve the clarity of water by acting as a filter to remove particles. Clear water stimulates the growth of submerged aquatic vegetation which, in turn, helps stabilize sediments on the bottom of the river. One single oyster can filter up to 50 gallons of water a day! The reefs themselves, which can be fairly large, provide habitat for organisms and decrease the velocity of waves and currents. Unfortunately, by the early 1800s, overharvesting and pollution had seriously depleted New York’s oyster population.

The amphibious urban futures depicted in the Rebuild by Design projects may be years off. But the feasibility of some of these ideas are currently being researched, explored, and tested throughout the city, albeit on a smaller, more immediate scale. Mathews Nielsen Landscape Architects is leading a team for the Pier 42 project where community feedback voiced a strong desire for the improvement of the area’s ecology. To achieve this, we’re exploring the establishment of an oyster reef to be located adjacent to the pier. 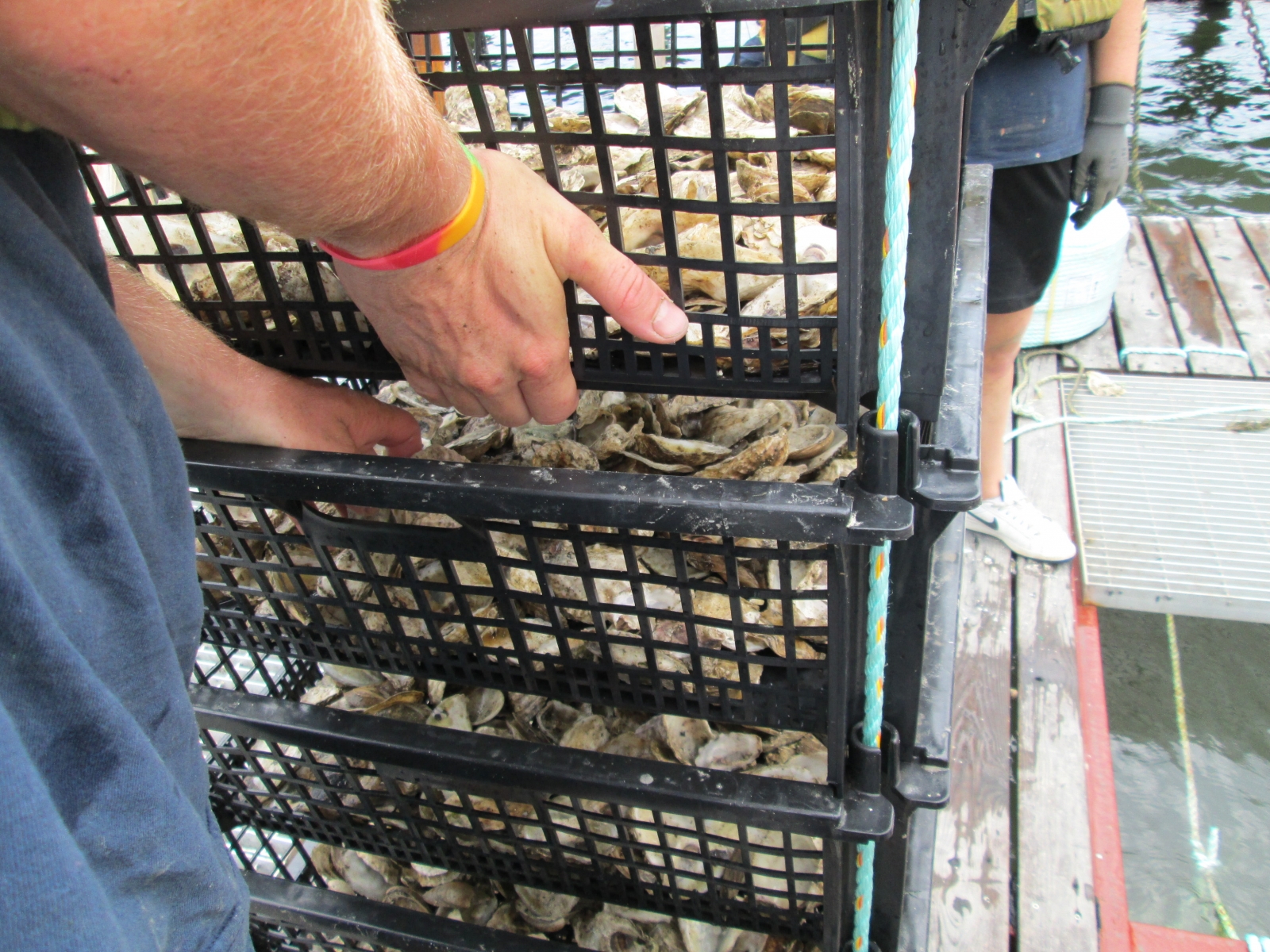 Early on in the Pier 42 design process, we met with marine biologists from NY Harbor School on Governor’s Island  and NY/NJ Baykeeper’s to better understand the appropriateness and suitability of incorporating an oyster reef into the project. (Both organizations are currently working on reestablishment projects in the region.) They helped us identify three potential challenges in building a new oyster reef at the Pier 42 site: stormwater drainage into the river, velocity of currents, and toxicity.

First, the Pier 42 site is located near a major combined sewer overflow, a drain that carries waste from the city’s connected stormwater and domestic sewage systems. In the event of abundant rain, the system reaches capacity and raw sewage floating along with stormwater is dumped directly into our waterways. We were told by the marine biologists that this would actually pose no problem for the oysters and their development.

Second, oysters thrive in shallow, brackish water with moderate water velocity—strong enough to bring food by, but not too strong to carry away the larva that attach and grow on the reef, allowing it to expand. The recorded water velocities at Pier 42 range from 2.48 to 21.68 knots. Our team’s preliminary studies led us to believe that some protection from waves would be required to install the reef in this spot. Typically, when reefs are being established, the oysters are grown in cages in order to keep them in place. For these reasons, we’ve identified a potentially protected location within the project limit, where the reef can most suitably be located for long-term success and viability. 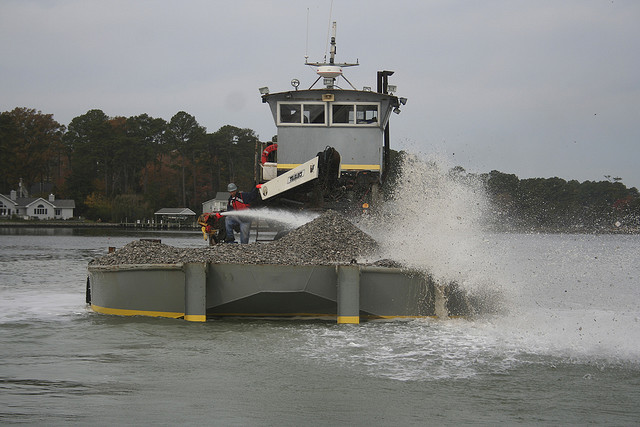 Oyster reef restoration in the Lynnhaven River near Virginia Beach

The third major issue, and somewhat of a surprise to us, is the toxicity of the oysters themselves. According to New York State Department of Environrmental Conservation (DEC), all oysters in NYC boroughs are considered toxic to humans. And while no one is suggesting that the oysters be consumed, the DEC’s concern is that poachers will become aware of the newly established reefs and begin harvesting oysters to be sold for consumption. Were these toxic oysters to enter the market, it would be impossible to verify the safety of any oysters. Should the reef be constructed, the installation will need to be inaccessible and protected from the public.

With additional research and creative design solutions, it appears that the main challenges in establishing oysters at Pier 42 can be overcome. In the coming months, the team will continue to explore the feasibility and incorporation of an oyster reef at Pier 42. While the site and project are small, it is important to remember that these pioneer projects can become important precedents and provide invaluable research for the city’s sustainable future. In our next post, we will return to land to discuss design challenges associated with renovating historic urban cemeteries.

Johanna Phelps, RLA, is a senior landscape architect at Mathews Nielsen Landscape Architects, P.C. in New York City. Since receiving her MLA from the University of Pennsylvania in 2004, she has worked on urban design projects in Manhattan, Brooklyn, and Philadelphia, and a botanic research institute in Texas.

This is one in a series of Metropolis blog posts written by members of Mathews Nielsen Landscape Architects’ Green Team that focus on research as the groundswell of effective landscape design and implementation. Addressing the design challenges the Green Team encounters and how it resolves them, the series shares the team’s research in response to project constraints and questions that emerge, revealing their solutions. Along the way, the team will also share its knowledge about plants, geography, stormwater, sustainability, materials, and more.