Is MoMA’s First Latin American Architectural Survey in 60 Years Too Little Too Late?

An expansive exhibition at MoMA reflects on Latin America’s Modernist legacy. Does it do the region justice? 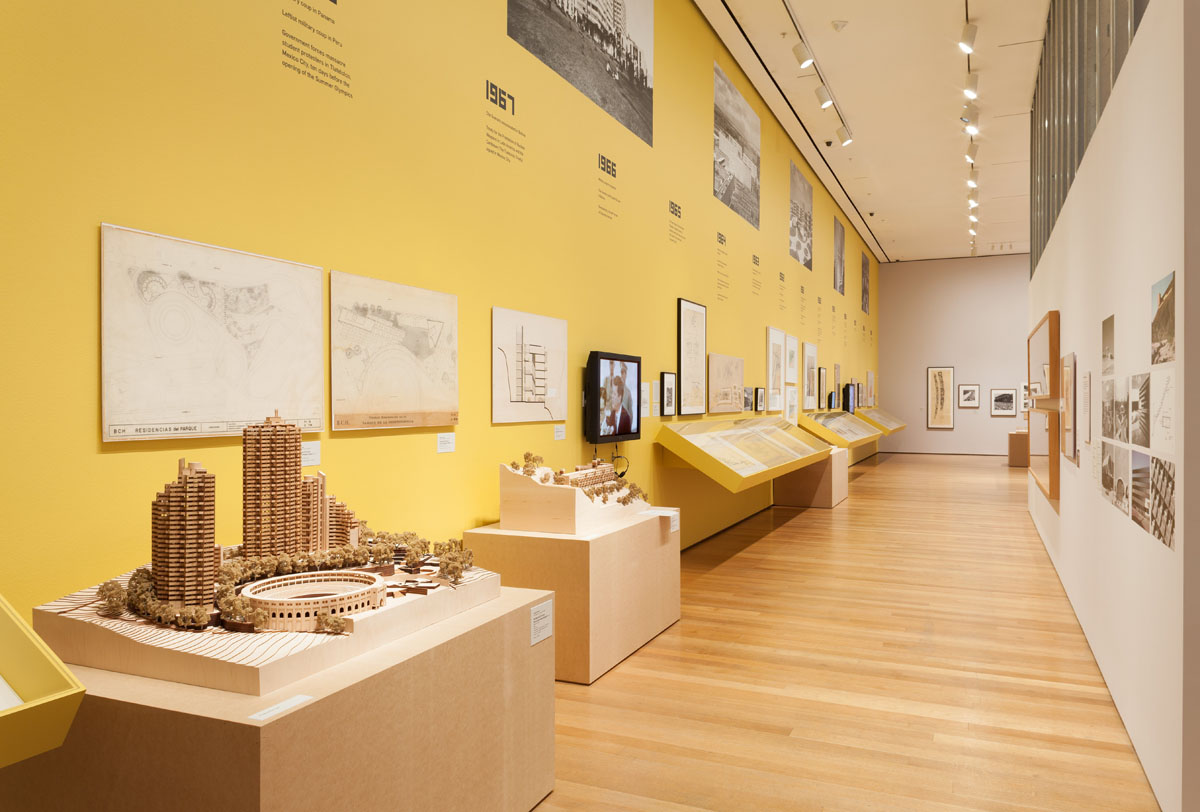 The exhibition’s titular timeline is inscribed on the gallery’s back wall. To the left lies a new model of Rogelio Salmona’s Torres del Parque residencial complex in Bogotá.

The architecture of Latin America has been barely explored in English-speaking publications and museum exhibitions. Two shows at the Museum of Modern Art in New York, on the Mexican architect Luis Barragán in 1976 and the Brazilian landscape architect Roberto Burle Marx in 1991, were crucial in calling attention to the creativity and depth of architectural and landscape design happening in Latin America in the postwar period. But even these exhibitions lacked a larger context to place the work; the Barragán exhibit, for example, ended up promoting the idea that his work was the epitome of Modern Mexican architecture when that was hardly the case. Such curatorial misreadings stem back to 1955, when MoMA opened its first, and until now, only survey of the region’s Modern architecture.

Latin America in Construction: Architecture 1955–1980, a richly documented exhibition on view at MoMA through July 19, doesn’t merely update the earlier survey. It aspires to present architecture from within the cultures it examines, an objective largely achieved with the assistance of an advisory committee from across Latin America. Organized by curator Barry Bergdoll with Patricio del Real, Carlos Eduardo Comas, and Jorge Francisco Liernur, the show examines a period of exceptional economic growth and urban development in many Latin American countries. (Read our interview with Bergdoll for more about his curatorial approach to the exhibition.) The 500-plus original works are arranged thematically; in the accompanying catalog a selection of drawings, models, and photographs is instead organized by nation, making much clearer the diverse approaches to technology, construction, and design in each context, as well as elucidating the relative hierarchy of countries in relation to industrial development.

In contrast to most of the rest of the world, World War II left Latin America undamaged, with resources that could be directed toward industrialization, development of infrastructure, and territorial transformation. Democratic and dictatorial governments alike adopted Modern architecture as the fitting expression of their desire to participate as equals in the global community. At the same time, the increased migration of poor people from the countryside expanded exponentially the shantytowns in all major capitals, increasing pressure on governments to provide basic infrastructure and housing.

Due to the fact that these countries lack industrial steel production, the materials that characterize these constructions are reinforced concrete and brick; with them, architects created masterpieces.
Bergdoll et al’s exhibition achieves two seemingly disparate objectives: continuity with the 1955 survey, Latin America Architecture Since 1945, and a break with its ideological position. Henry-Russell Hitchcock’s landmark show presented the construction of a homogeneous “Latin American” Modern architectural style that was closer to the rationality of Mies van der Rohe’s structures than to the perceived irrationality and sensuality (read: curved walls) of the Brazilian architects who had been lionized in MoMA’s 1943 Brazil Builds exhibition. The current exhibition greatly expands the number of works surveyed. While it includes the Venezuelan and Mexican university campuses seen in Hitchcock’s show, here those buildings are depicted as part of more expansive schemes and programs that frequently included public housing and highway development. This contextualization signals the curators’ renunciation of style as the main frame of reference, stressing instead (as in the catalog’s essays and the wall texts) economic and social forces as defining shifts in architectural development. Rather than seeking to convey stylistic homogeneity, we find a variety of design approaches to architectural Modernism. 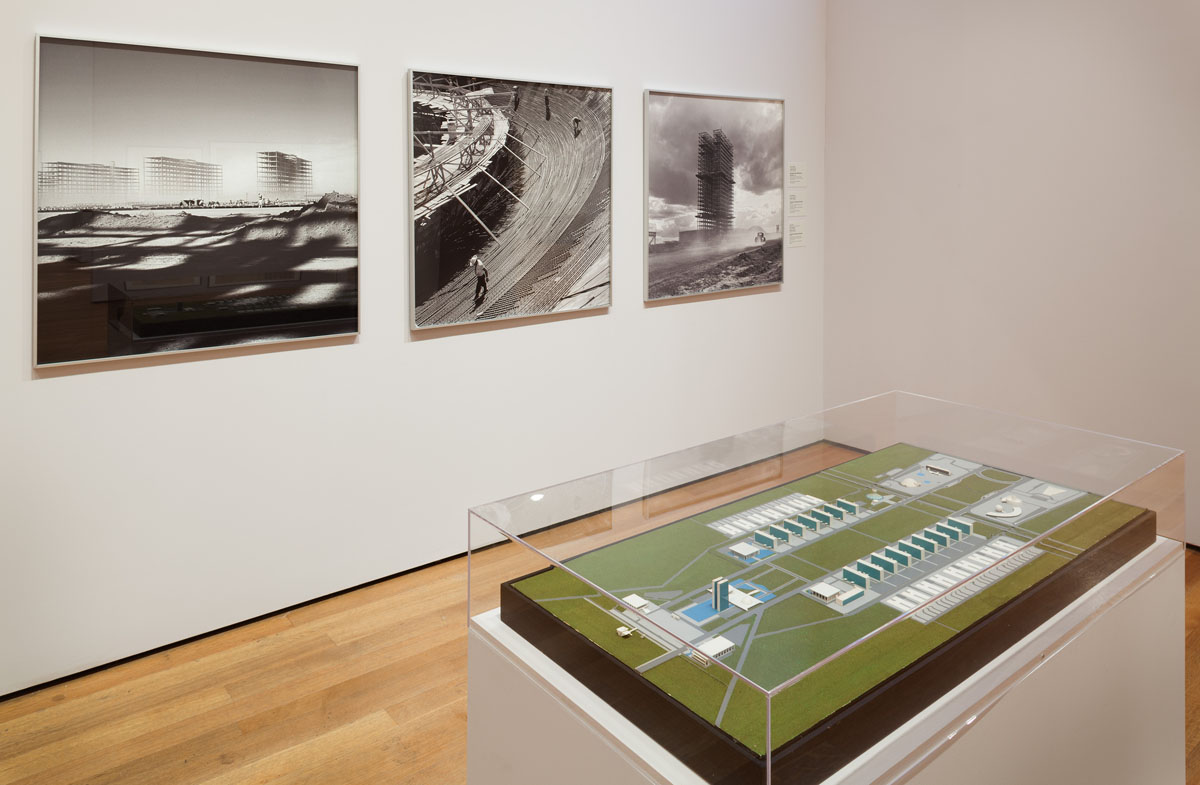 A model of Brasília’s Capital Complex and the Monumental Axis foregrounds Marcel Gautherot’s 1956 photographs of the new capital’s construction.

Due to the fact that these countries lack industrial steel production, the most common materials that characterize these constructions are reinforced concrete and brick; with them, architects created masterpieces as diverse as SEPRA and Clorindo Testa’s Bank of London and South America in Buenos Aires and Rogelio Salmona’s Torres del Parque in Bogotá. These and other remarkable buildings continued efforts by artists and intellectuals earlier in the twentieth century to resolve the tension between colonial and indigenous traditions and their desire to participate in the modern world that World War I had made necessary and possible. The largest section of the exhibition is devoted to these societal impulses, evidenced by the transformation and densification of cities with new building types, such as shopping centers for the newly affluent middle classes or schools and civic centers designed to bring the state’s presence to Latin America’s neglected interior. The urgency of urban growth is nowhere more evident than in the creation of ab novo of Brasília, the then-new capital of Brazil, inaugurated in 1960 on a site in the center of the country. Among the scores of international visitors to the frenzied construction site in 1959 was Cuba’s new prime minister, 32-year-old Fidel Castro, who was no doubt inspired by this visit to follow Brazilian president Juscelino Kubitschek’s example. Kubitschek had followed through on his promise to “have Brazil advance fifty years in five,” and Castro may have been moved to duplicate this great advance in the area of housing and infrastructure in the Cuban countryside.

As urban slums grow at faster rates than formal cities, governments have accepted their existence and all but abandoned a belief in architecture as a major palliative instrument.
A small section, “At Home with the Architect,” offers glimpses of how modern life was envisioned in the period. The catalog of another very good show that closed May 16 at the Americas Society, Moderno: Design for Living in Brazil, Mexico and Venezuela, 1940-1978, completes the picture presented at MoMA, as it includes contemporary furniture, metalwork, textiles, ceramics, and printed matter, with many pieces designed by an unexpectedly high number of women—the Cuban-Mexican Clara Porset being the most well-known. Two other small sections in the MoMA show, “Export” and “Utopia,” focus on the international influence of Latin American architects. Works displayed include the prefabricated Mexican rural schools conceived by the architect Pedro Ramírez Vázquez and widely adopted abroad, and images of the Open City in Ritoque, Chile. The latter was a unique pedagogical experiment initiated by architecture faculty and students at the Catholic University in Valparaiso, a beach community where poetic acts devised by resident artists were used as inspiration for the design of architectural form, regardless of program and site. 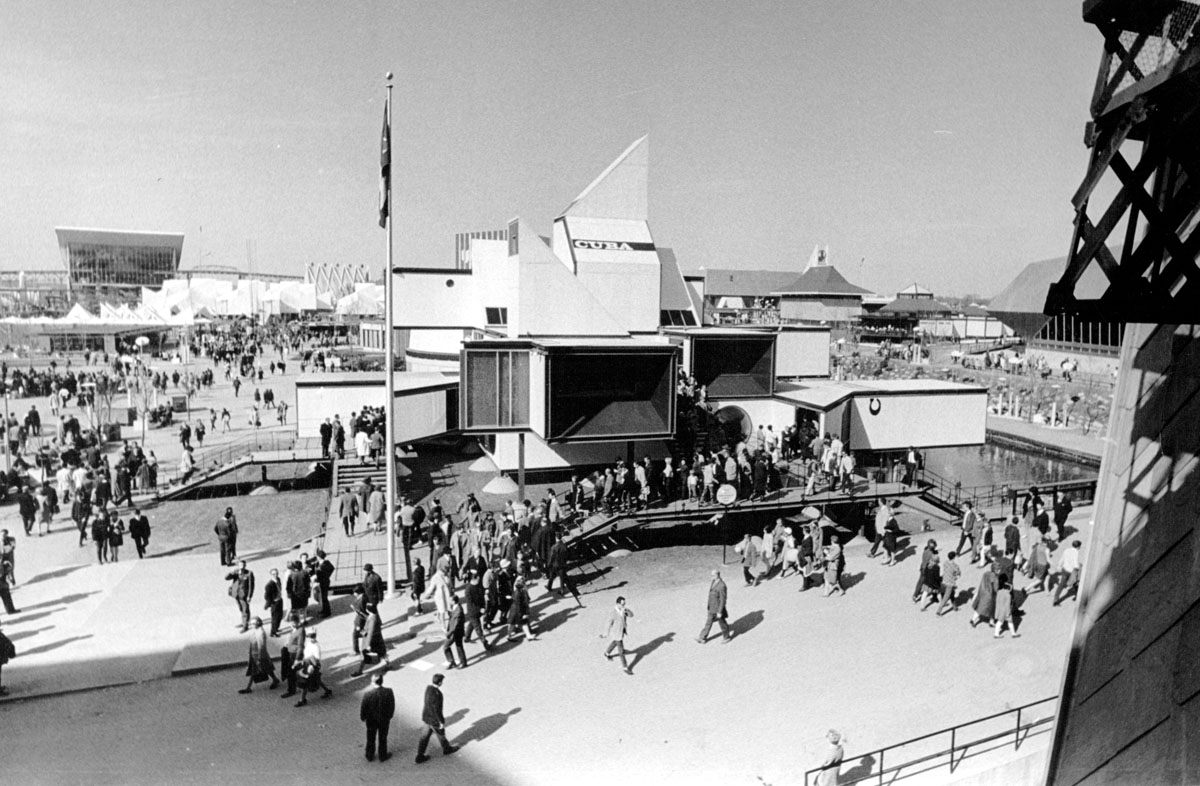 Cuba’s pavilion at Montreal’s Expo ’67 demonstrated novel methods for prefabricated, low-cost housing. The question of housing was the paramount concern of Latin American countries in the postwar period.

Perhaps the most problematic aspect of the exhibition is its handling of housing, in a section organized chronologically beneath a schematic timeline. Diverse typologies are juxtaposed, such as social housing built by the state for its working-class employees; market-value apartments for the upper middle class; housing built by mixed-income cooperatives; and experiments with prefabrication, among others. Such juxtaposition makes it very difficult to grasp the specific technological and political solutions, or the range of services included in buildings and communities in different countries. The exception is the well-documented Peruvian PREVI (Projecto Experimental de Vivienda) plan, an experimental housing and community development project coordinated by the British architect Peter Land that involved the participation of 12 Peruvian firms and as many internationally known architects. Although there are no maps that show the vast extent of the urban land covered by shantytowns in the various cities, some film clips take the viewer into these neighborhoods, making it possible to see why housing for Latin America’s poor remains an intractable challenge. As urban slums grow at faster rates than formal cities, governments have accepted their existence and all but abandoned a belief in architecture as a major palliative instrument. Instead, provisions for basic neighborhood infrastructure or catalyst buildings such as community centers-cum-libraries in Bogotá have been adopted as more realistic and effective solutions.

An immersion in an exhibition as comprehensive as this can be a daunting proposition. Fortunately, Bergdoll and Liernur’s essays in the catalog provide the much-needed context to make sense of the diversity of projects and the comparisons derived from the thematic organization of the show. These essays also hint beyond the overly cheery, fast-moving images of development in several cities that introduce the show. By 1955, the United States had already resumed military interventions in Latin America, ousting Guatemala’s elected government for expropriating United Fruit Company’s unproductive lands. In 1978, Operation Condor, the U.S.-supported campaign of state terror by military dictatorships across the Southern Cone, resulting in the disappearance of thousands of people—including many architects—had peaked. One hopes that the current signs of rapprochement between the U.S. and Latin America will make it possible to organize another survey that will take us into the present—one we hopefully will not have to wait another half-century for. Such a survey would begin with the theorizing of a new “appropriated modernity” by key architects and critics, and the creation of the first transversal architectural discourse in the region, exploring common issues such as urban fragmentation, collective memory in the city, and the preservation of historic centers and indigenous landmarks.