Isamu Noguchi’s early photographic expeditions to India shaped many of his later endeavors. 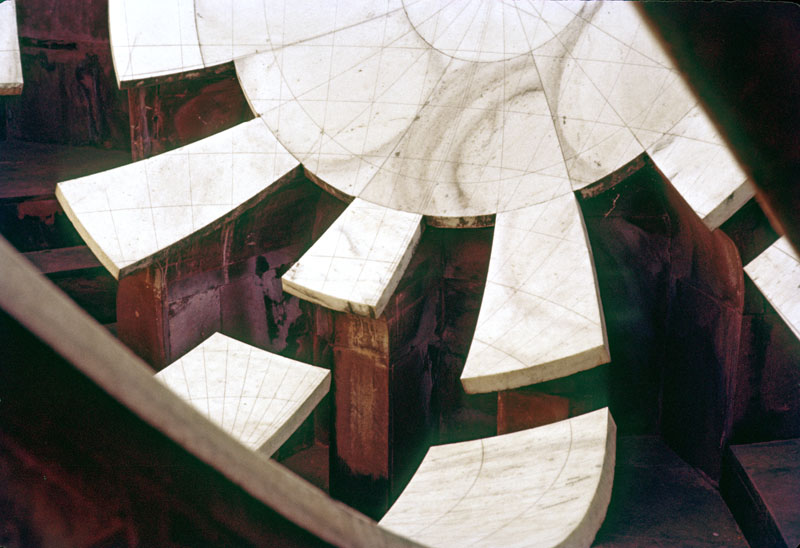 In 1949, the artist Isamu Noguchi photographed Jantar Mantar, an eighteenth-century astronomical observatory in Jaipur, India. This image—of a marble-clad monument that measures local time, altitude, azimuths, and zenith distances—is one of many displayed at the Noguchi Museum in Queens, New York.

“India is a place that taught me something about the various fundamental problems of sculpture,” the Japanese-American artist and designer Isamu Noguchi reminisced in a 1956 article in the magazine Geijutsu Shincho. “They bring the materials at hand to life more effectively. And they are shocking. In that respect they resemble modern art.” Noguchi’s particular genius—the marriage of organic form and early Modernism—was influenced by his childhood in Japan, a youthful stint in Paris, friends like Buckminster Fuller and the choreographer Martha Graham, and his travels around the world. In each of these, as his writings indicate, he sought ideas and emotions that resonated with the idea of modern life, but also pushed toward the future.

He was searching for such resonant discoveries when he decided to travel to India early in his career, but those plans were thwarted twice, first by an apprenticeship with Constantin Brâncuşi and then by a lack of funds. It took a love affair gone wrong (with the first Indian Prime Minister’s niece, no less) to finally get him to the subcontinent, in 1949.

That’s the short version of the long story behind a small display at the Noguchi Museum in New York, titled Noguchi as Photographer: The Jantar Mantars of Northern India. Curated by Matthew Kirsch, the one-room show is the first in a series that will uncover how Noguchi’s photography played an instrumental role in his career by combining the images with publications in which they appeared and models of designs and sculptures they influenced. 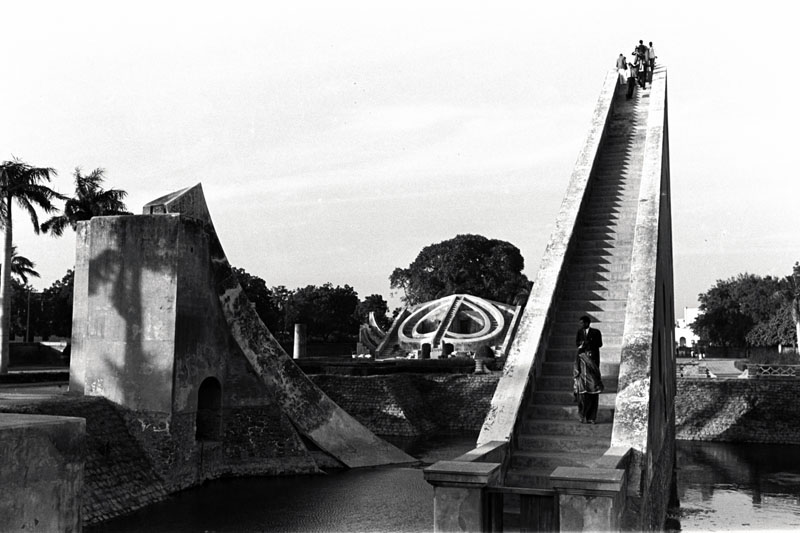 Noguchi’s photographs of the Jantar Mantar observatory in Jaipur and Delhi often include visitors and the urban context in the frame.

This first exhibition considers the photographs that Noguchi took with a Leica camera in 1949 and 1960 of monumental astronomical observatories in the cities of Jaipur and Delhi. Built between 1710 and 1728 by Raja Sawai Jai Singh II, a local governor, the sandstone and marble surfaces of the bowls, walls, and staircases are marked to give readings of the positions of stars, local time, azimuths, and other measurements of the cosmos. “You might call them useless architecture or useful sculpture,” Noguchi wrote when the photos were first published in Portfolio: The Annual of the Graphic Arts (1951). “Whether or not they were intended so, Jai Singh’s works have turned out to be an expression of wanting to be one with the universe.”

The 18 photographs on show seem to underscore this meaning that Noguchi read into the structures. He makes the monumentality of the yantras—as the edifices are called—clear in every frame, through dramatic angles and some close-ups. Noguchi also frames people to great effect—they are seen climbing in and out of the yantras, sometimes running past the frame. One shot shows a man at the bottom of what looks like a stairway to heaven, and a group of tourists, very small indeed, at the top of the stairs. The urban landscape of Delhi, including some more modern buildings, is visible in the distance. If Noguchi wanted to characterize sculpture and landscape architecture as a way of connecting the ephemeral, sometimes playful, human experience to the eternal constants of the universe, he couldn’t have found a better poster image. 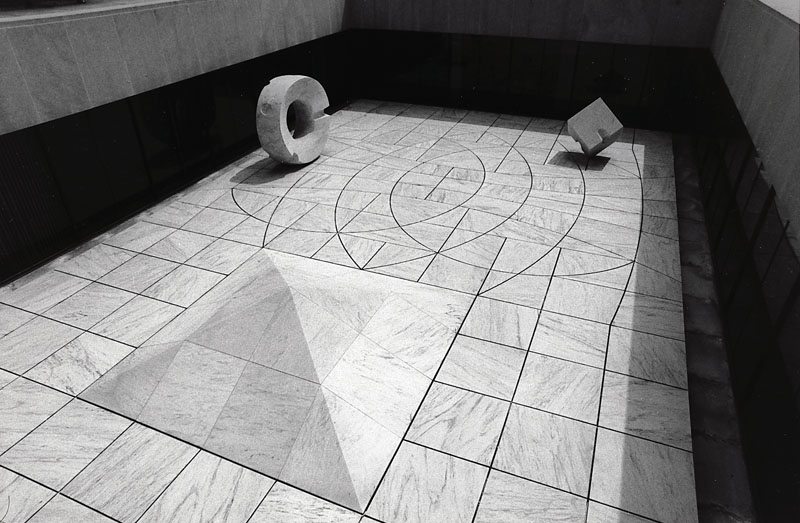 The objects in the exhibition show how Noguchi tried to reflect these ideas in his own work—in a 1968 model of his design for the Garden of the Moon at Expo ’70, and a 1963 model of the Sunken Garden for the Beinecke Rare Book & Manuscript Library at Yale University. The architect Gordon Bunshaft had already begun construction on the library in 1960, when he traveled to India with Noguchi as his guide to the Jantar Mantar in Jaipur. They returned from the trip and added the garden to the building’s scheme. It was activated by shadows and had a “cube of chance,” a geometric idealization of the universe common to the Euclidean model and Hindu cosmogony.

The memory of Jantar Mantar that would feature more directly in the Garden of the Future that Noguchi designed with SOM and Bunshaft for IBM’s headquarters in Armonk, New York, in 1964—a concave bowl in the ground is a not-so-subtle reference to a similar device at Jaipur. The Jantar Mantars also became part of Noguchi’s thinking about play, and its ideas are visible, albeit in translated form, in various unbuilt schemes for playgrounds—most famously the Adele Levy Memorial playground designed with Louis I. Kahn between 1960 and 1966. The exhibition contains small-scale models of a play concept called Slide Mantra that he conceived in the 1960s, and a larger version can be seen elsewhere in the museum. 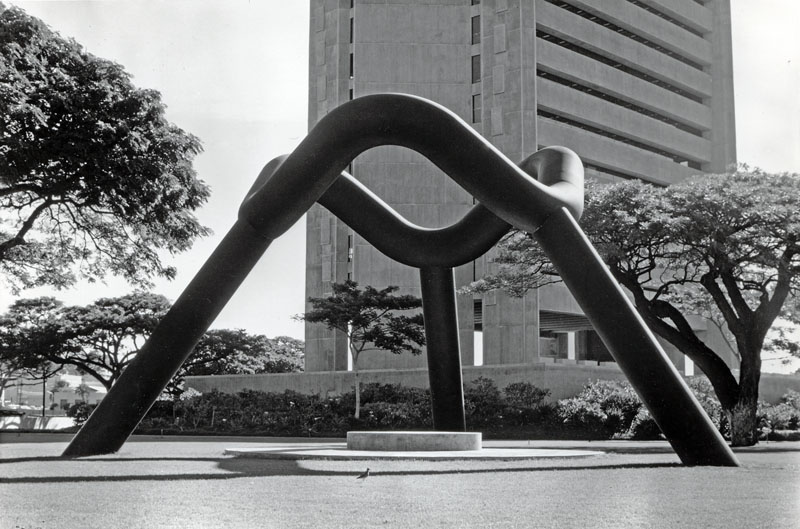 Noguchi built the Sky Gate (1976) in Honolulu, Hawaii, which tracks the movement of sunlight, much like the instruments at Jantar Mantar.

Finally, in 1976, Noguchi constructed a yantra of his own. Twice a year, the swoopy Sky Gate sculpture in Honolulu, Hawaii, casts a shadow that is a perfect ring, encircling a disc on the ground. These and many other connections are made clear in the excellent brochure for the catalog, which is free to download from the museum’s website and should be considered an essential part of the exhibition.

The combination of photographs, models, and brochure is a winning formula—the only thing that detracts is the quality of the photographic prints. The unevenness and lack of clarity might well be a product of the archival materials that the museum had to rely upon. It’s a small glitch in an otherwise well-rounded experience, and something that the museum will hopefully iron out for future installments of what promises to be a very exciting exhibition series.

Noguchi as Photographer is focused on the images he created, not on the trips to India themselves, but those journeys were a significant aspect of his career. The show casts light on the depth of the Japanese-American’s connection with a land that wasn’t his own. The relationship was marked by spirituality (Noguchi turned up his nose at India’s more gritty realities), and the work it inspired was close to Noguchi’s heart, by his own account. One of his many unbuilt projects was a 1956 scheme for a memorial to the Buddha in Delhi. Speaking of it in 1973 for the Smithsonian Archives of American Art, the artist said wistfully, “My best things have never been built.”