As the celebrations memorializing the fall of the Berlin Wall have quieted, we should reflect on the versions of history we tell ourselves. 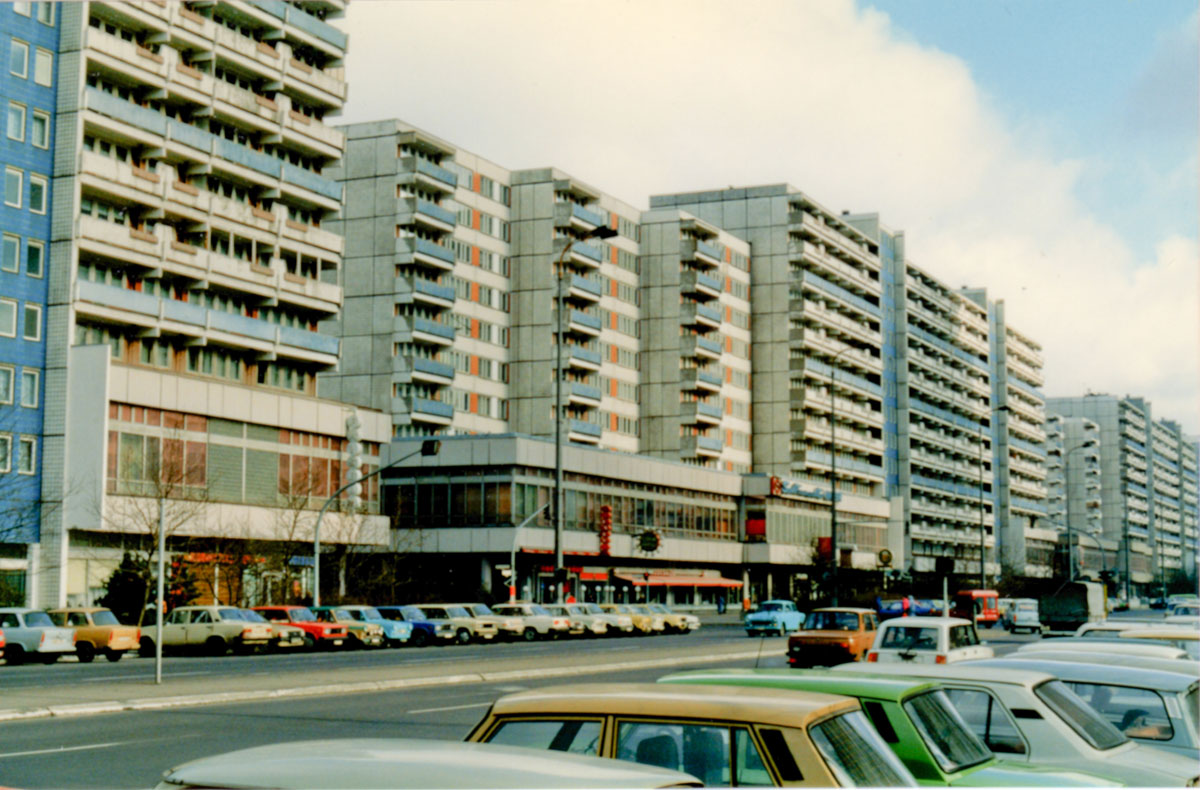 East Berlin, February 1989: Leipziger Straße, the preeminent avenue of the German Democratic Republic (GDR), seen here in the winter before the wall came down.

History is written by those who emerge victorious. The legacy of those who don’t is dependent on the goodwill of the ones left standing and whatever eulogies they are prepared to deliver.

Twenty-five years after the Berlin Wall’s demise, it is as though a large part of the twentieth century never happened. An entire period has been erased from public consciousness, almost like a blank frame in a film. The dissolution of the former Eastern Bloc has been entirely attributed to forces in the West, while the role of the East has largely been forgotten. The free market economy was and is presumed to be history’s inevitable course—our collective manifest destiny. After having engulfed the West in the 1980s, it was only a matter of time before it would engulf the East, too.

How accurate is this account of events? Those of us old enough to have witnessed the fall of the wall mostly remember the overwhelming sense of surprise, the worries that “the West was not quite ready for this.” After all, Reagan’s call for Gorbachev to “tear down this wall” a couple of years earlier was delivered in the firm conviction that the Soviet leader never would. When he did, the act was largely met with disbelief.

Those who had built the wall, now demolished it. There was no denying the fact that the disintegration of the East was at least partially fomented by the East—not just through the removal of the wall, but also through larger reform from within, coupled with crucial proposals for disarmament. It was predominantly this reform that triggered the famous moment of November 1989. Decades later, this historical telling— one the remaining powers have never been particularly keen to emphasize—has almost completely faded into the background. Even the official terminology embodies a curious misnomer: the wall did not “fall”—it was torn down.

Today, the construction and demolition of the Berlin Wall feels like a parenthesis in a text— whatever is written in between can be removed without fundamentally altering the course of the narrative. The 28 years leading up to 1989 are now widely perceived as time that passed between one pointless act to another. (If you don’t build walls, you don’t have to tear them down, the logic goes.) But how much interpretive license can be claimed in viewing recent history as expendable text between parentheses? What periods should we pretend never happened? The Berlin Wall was constructed in 1961; the Red Army took Berlin in 1945; Nazi Germany declared war on the USSR in 1941; the October Revolution exploded in 1917; Karl Marx published The Communist Manifesto in 1848. How far do we need to go back? How much of history can we regard as an aberration? Where do we insert the opening parenthesis—25 years ago? Half a century? More?

Somehow, the unification of Berlin and the end of the wall granted history a premature sense of closure. . . a “happily ever after” that will not materialize any time soon.

Prior to the “fall” of the Berlin Wall, the East had been declared a parallel narrative that spanned half the globe, with its own interpretation of history, a different philosophical disposition towards “economic inevitability,” and its own particular version of the truth. In the East, the wall was not a symbol of oppression, but a form of protection—an “Anti-Fascist Protection Rampart” to protect a real democratic system, acting out the will of the people from outside aggression.

As a teenager growing up in Western Europe, I was always listening to the radio and surfing the FM and MW frequencies. I would sometimes hear the broadcasts of Radio Moscow. I remember being mesmerized by its creative interpretations of the truth—or at least the truth as I had come to know it through Western media. I would hear the same news facts, the same events, with the same cast of characters. But they were all embedded in a completely different discourse, invariably relaying the opposing view with an entirely different—and almost always inverse—notion of victims and perpetrators. 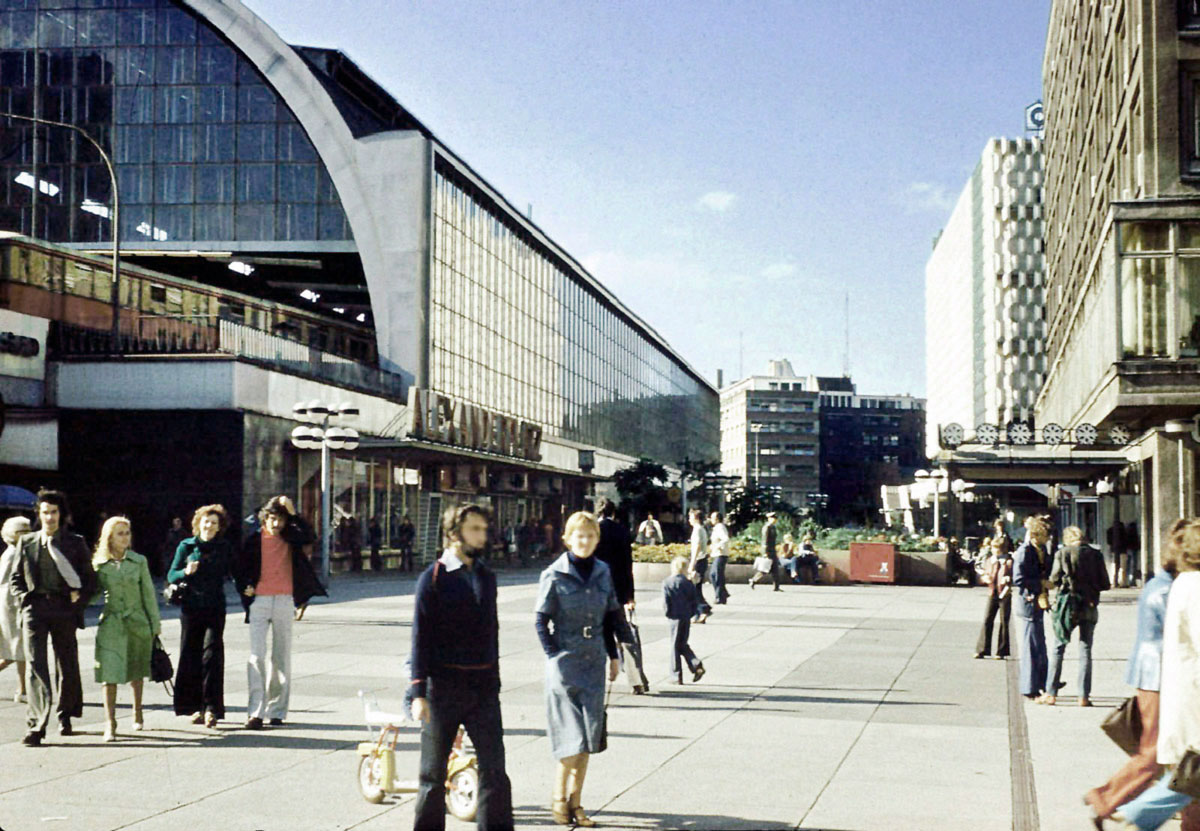 Alexanderplatz was and remains one of Berlin’s most vital public spaces. Life in the East wasn’t as bleak as Western propaganda claimed. Nor was the dissolution of the GDR wholly the product of outside forces. In early November 1989, the square was the site of one of the largest demonstrations in socialist Germany’s history, which accelerated the wall’s demolition.

In 2014, I turned 50. My life can now be divided into equal halves—half my life I lived with the wall, half of it without it. I am old enough to remember the ideological context of its existence, young enough to have a vested interest in its absence. For me, it remains an open question whether the existence of two parallel systems may have served a purpose beyond the eventual disappearance of one of them. Despite the ongoing threat of an all-out confrontation between the two blocs, the West seemed a less harsh, more humane place than it does today, particularly to those struggling to keep up in an evermore intense economic rat race. In retrospect, it is not that far-fetched to historically interpret the welfare state, as it existed during the 1960s and 1970s in Western Europe—with labor movements, minimum wages, and social provisions—as a kind of preemptive action against this “other version of the truth.” A way of preventing it from becoming the only truth.

It is ironic how today, even with the wall gone, the divide persists. Only this time the divide is not strictly ideological, but between rich and poor, between opportunity and the lack thereof. This is often explained as the economic legacy of 40 years of Communist rule that will heal with time; but as time passes, that position seems increasingly untenable. It appears the asymmetries produced by an uncontested and unchallenged capitalist system are far larger than any other asymmetry ever created by the different ideological conventions of West and East. The physical wall that once separated the German people seems to have been replaced by an intangible wall in the form of a default inequality no longer subject to any political will—neither that of the left or right—to remedy it. 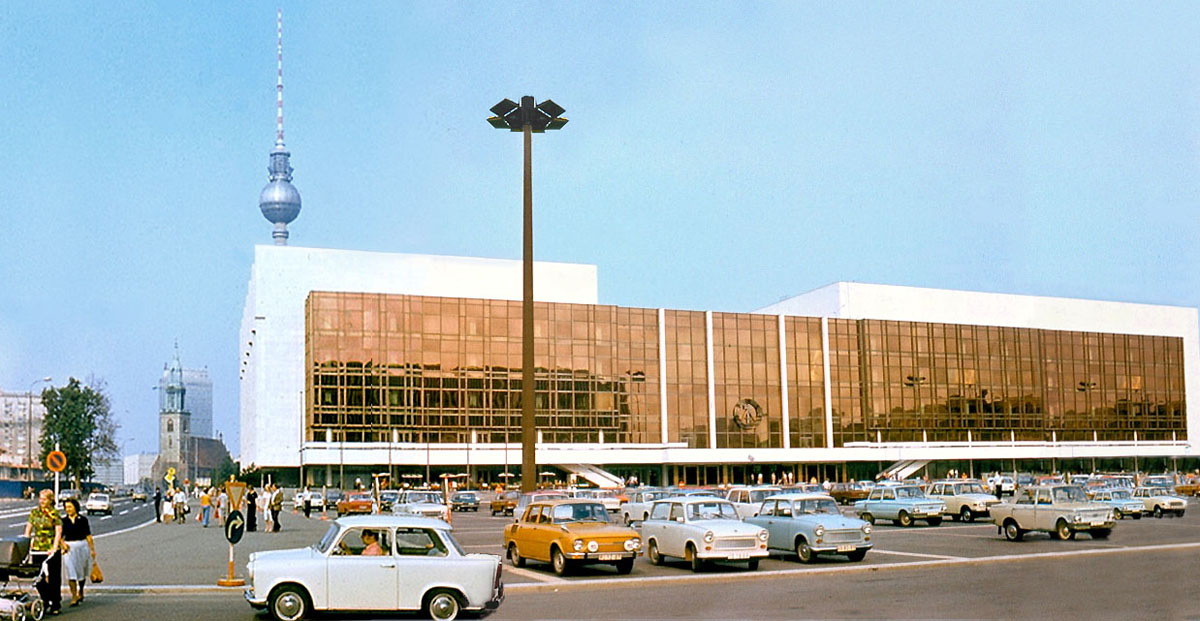 Opened in 1976, the Palast der Republik was the civic and cultural heart of East Berlin. The 40th anniversary of the GDR’s founding was held here in October 1989. Following unification, the building was closed for the removal of asbestos, a procedure that wasn’t completed until 2003. Despite the efforts of preservationist crusades, the building was razed in 2008 to make way for a new cultural center.

Much of the twentieth century was dominated by ideological oppositions rooted in highly politicized historical determinisms. Does the twenty-first century mark the absence of ideology, of the political? Consensus by way of amnesia? We no longer hold a regard for the grand social experiments of the last century. We recognize their failure and move on. Through forgetting, we hope to avoid repeating the past and with it the chance of new failures. Yet, in dismissing these experiments as aberrations, we also forego the nature of their deeper quest—the issues that they, for better or for worse, tried to address.

Somehow, the unification of Berlin and the end of the wall granted history a premature sense of closure (the demolition of built structures tends to do that), a “happily ever after” that will not materialize any time soon. History craves a degree of definitiveness it can never acquire, a desire that condemns us to proceed on the basis of half-truths, which we then take for the whole truth.

In a campaign speech during the 2008 primaries, U.S. president Barack Obama paraphrased William Faulkner: “The past isn’t dead and buried. In fact, it isn’t even past.” At the time, he was talking about the history of American racial relations. In 2015, a generation after the momentous events of 1989, the sentiment seems every bit as true for global relations. In October, there were 19 incursions into NATO air space by military aircraft belonging to the Russian Federation within a space of two days. In late November, ironically coinciding with the celebrations in Berlin, the Russian Ministry of Defense voiced its intention to resume patrols of long-range bombers from the Arctic Ocean to the Caribbean and the Gulf of Mexico. As the West proceeds on the basis of its half-truths, the East seems increasingly set on claiming its own. We eradicate the time before 1989, they eradicate the time since. It seems that, in the end, nothing is unilateral, not even the erasure of history.

Reinier de Graaf is an architect and partner at OMA. He is also the director of AMO.