Photographer Documents What Play Time Looks Like Across the Globe

James Mollison’s latest book and exhibition capture playgrounds from around the world. 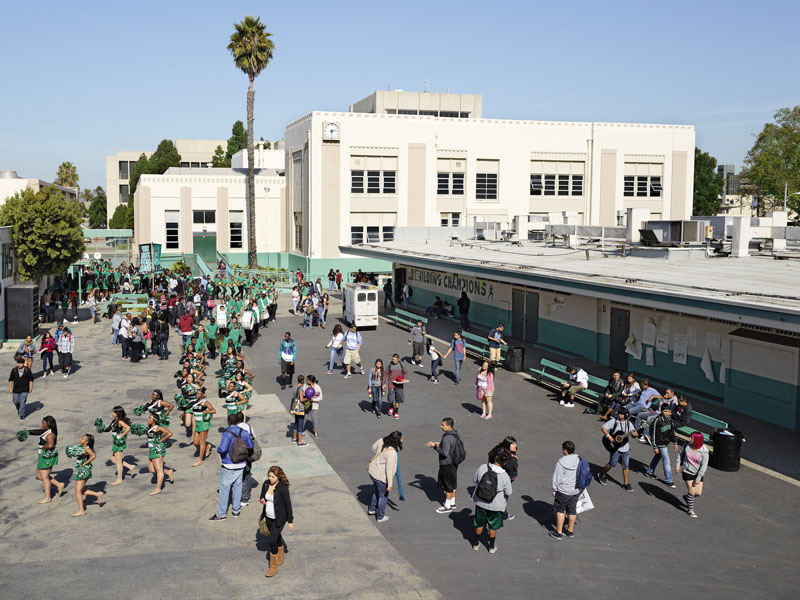 In 2009, the photographer James Mollison was reflecting upon his Oxford school days when he realized that nearly everything he remembered happened on the playground—memories of games that were playful and fun, but also some that were violent. Inspired, Mollison embarked on a book project: photographing the playgrounds of both private and state schools in England. “Some of the private schools in England would have virtually no supervision for the children on the playground because they’d been taught from a young age how to play and interact,” he says. “Whereas I went to one inner-city state school in London and I was assigned a security guard for my protection.”

While on assignment, Mollison expanded the project to include schools in Kenya and eventually trekked around the world, photographing playgrounds in more than a dozen countries. He found an incredible diversity in the schools but, also, a universality in the children’s play—particularly with boys. “Maybe it’s just because I was thinking about my own time in the playground,” Mollison says. “It didn’t matter where I was, boys pretty much did the same thing. 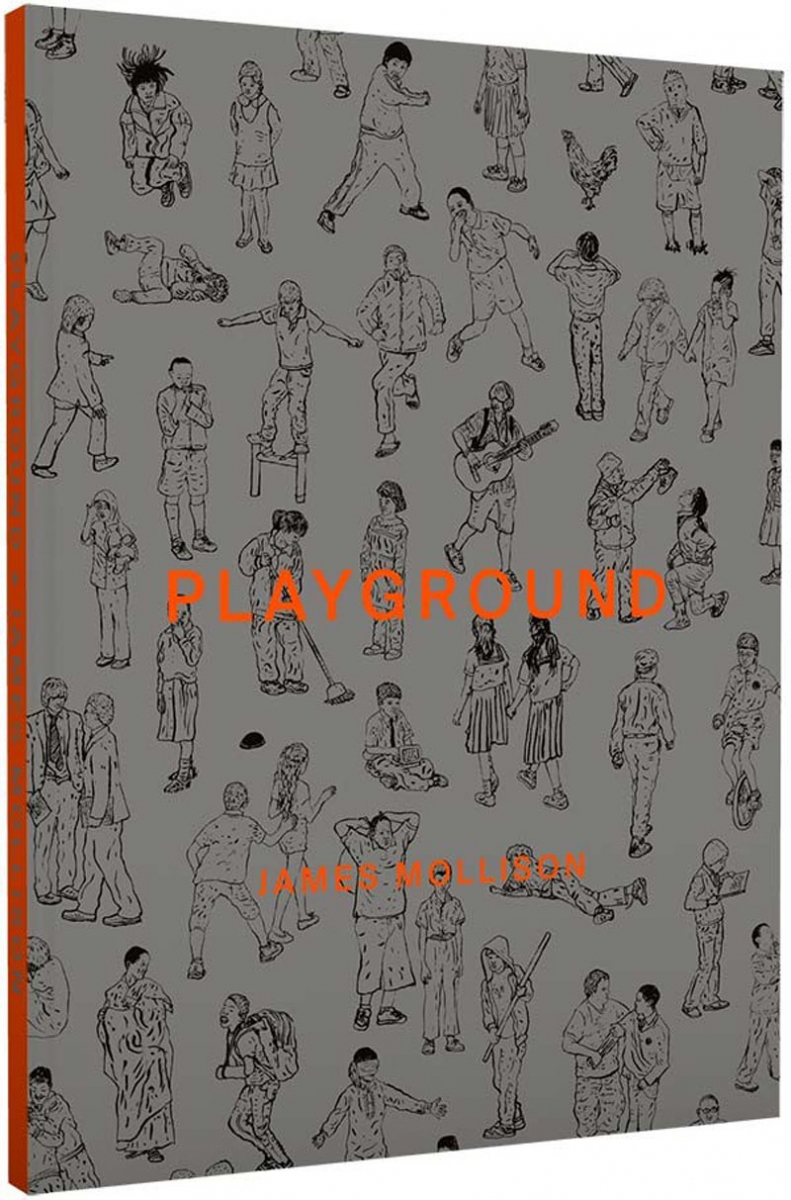 It would be a little bit more raucous in some places than others—whether in a school in a slum in Sierra Leone, China, Bolivia, England, or America—but how they played was the same. Perhaps the only exception to it was Japan, where the kids really were amazingly well-behaved with each other.” Mollison took the time to speak to Metropolis about what he witnessed. 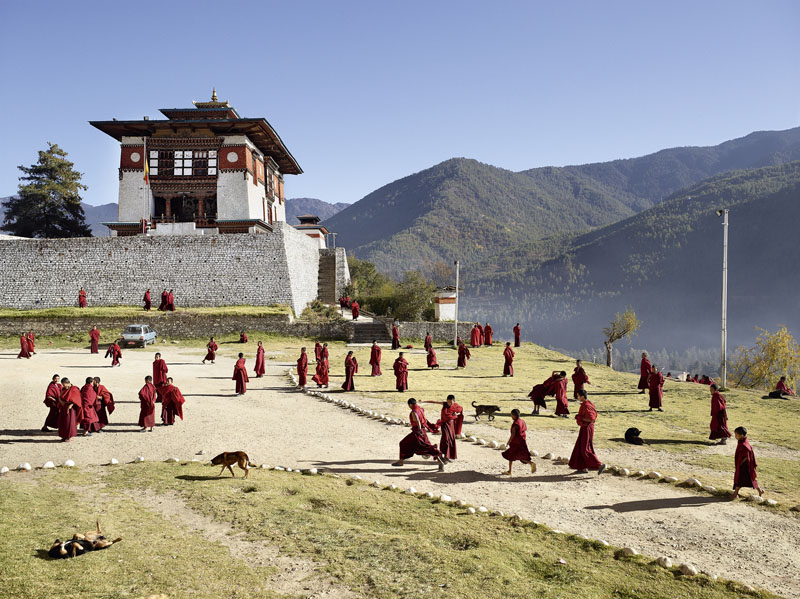 On a dramatic ridge overlooking Thimphu, student monks in red start the day with one hour of praying before their first classes start at 6:30 a.m. At 8:00 a.m., they have breakfast and a short break before resuming classes. Many boys are sent to the monastery because their families cannot afford to feed them. 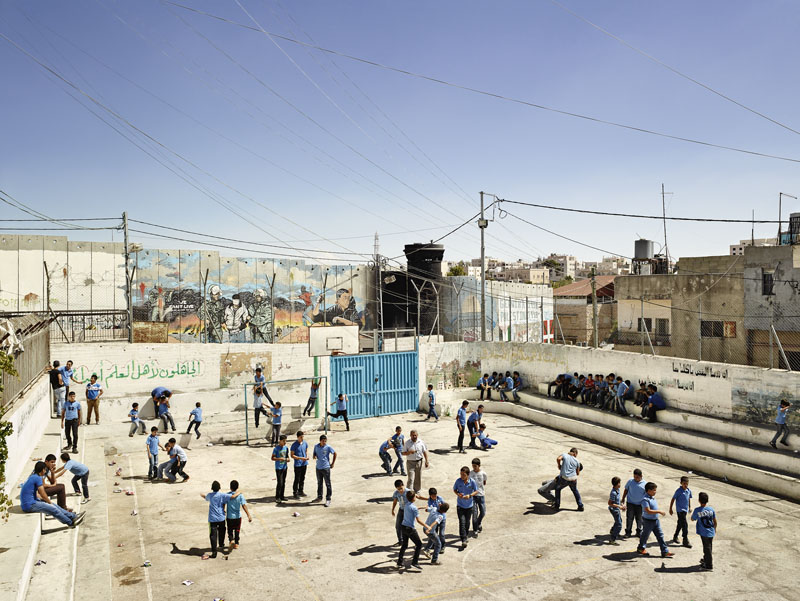 My starting point had been that idea of the moments in the playground, but the pictures have turned out to be as much about the environment, the landscape, and the setting of the school. I found this school near the wall which had this amazing mural depicting the stone-throwing confrontations. The third- and fourth-graders watch the towers to see if the soldiers are looking, and, if not, they throw stones at them. Whenever hostilities flare up with the Israelis, the air fills with tear gas and the headmaster sends everyone home. 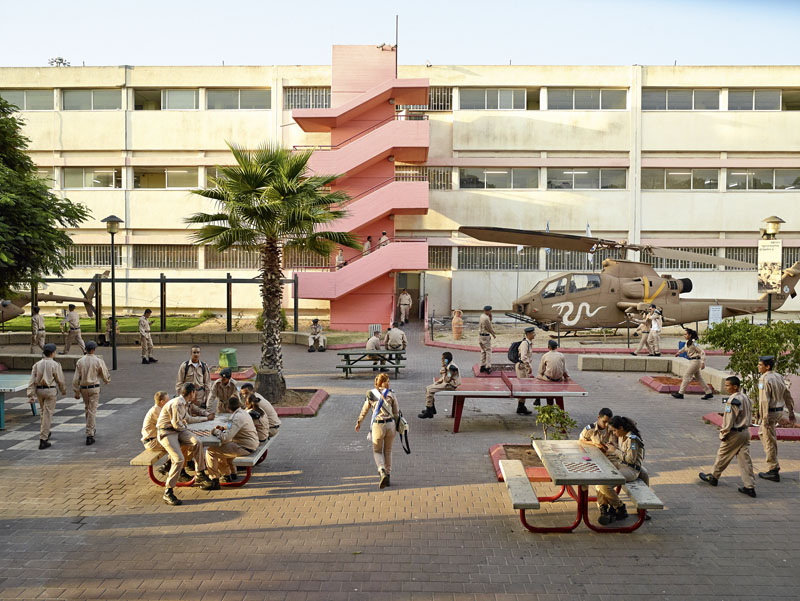 In Israel, I photographed a military high school, a school in an Orthodox Hasidic Jewish community in the West Bank that looked across a Palestinian village, and a liberal-arts school. So you’ve kind of got this range of schools within the country, but comparing them is too simple of a generalization. 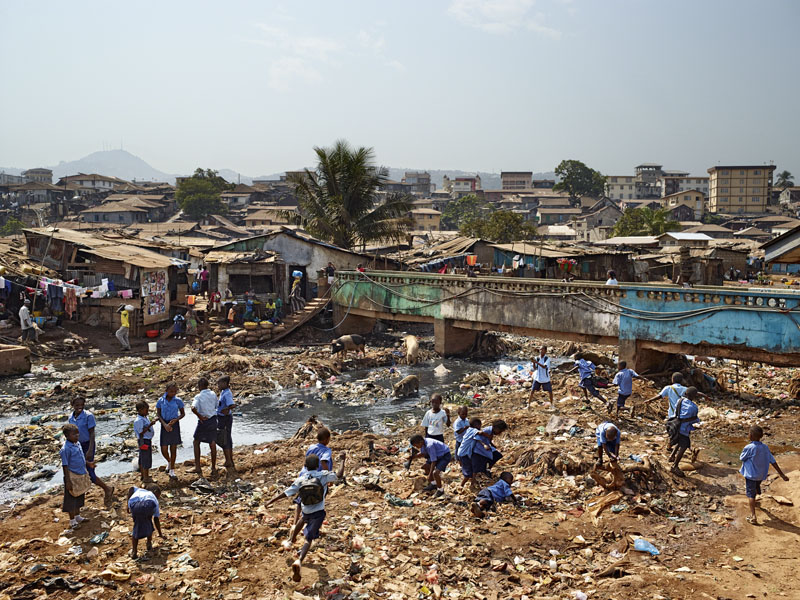 This school has a little river behind it that floods every year, so rubbish accumulates in the banks. It’s pretty disgusting walking through some of the things, such as cans and bottles, but the kids were completely oblivious. I spent the whole time wincing, worried that one of them would cut their foot on a metal can as they ran around playing their games. 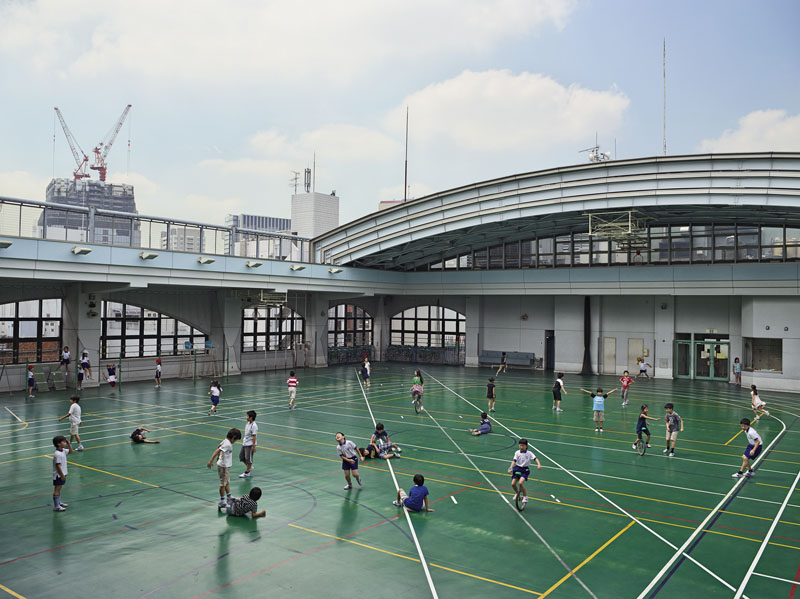 The playground of this state school is on the roof, above the sixth-floor classrooms. It’s bizarre, but in Tokyo you see how little space there is. The playground has a retractable roof that plays music when it closes. 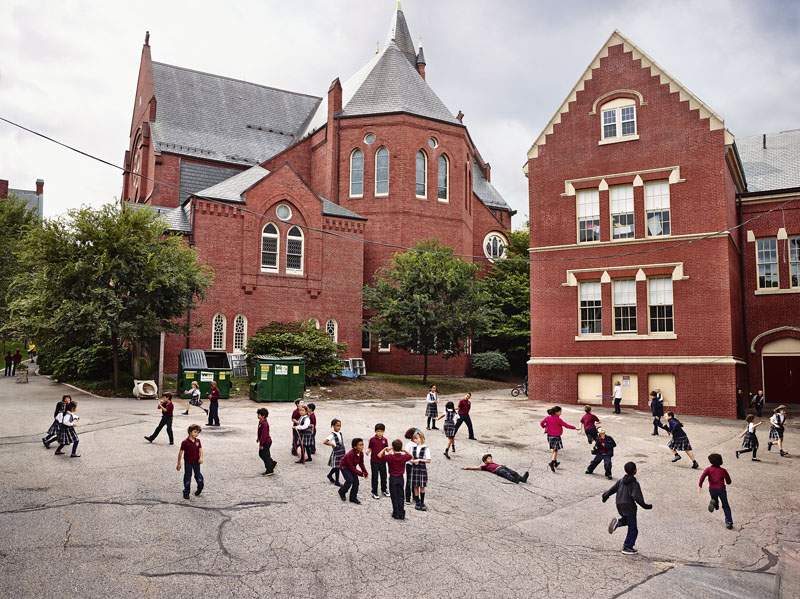 This is my wife’s old school at a moment where there were a couple of kids who taunted the boy with his fingers in his ears. It reminded me of the saying that sticks and stones will break your bones but names will never hurt you, which I think is incredibly untrue—kids can be incredibly mean. 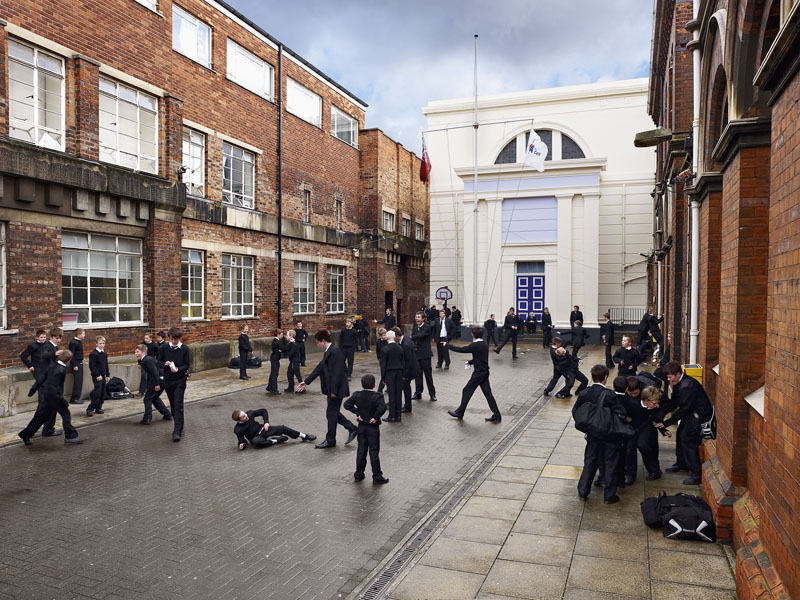 The nearly 300 pupils come mostly from white, working-class backgrounds. On the playground, they are tough and boisterous. The cluster of boys on the right was giving the blond boy a wedgie. 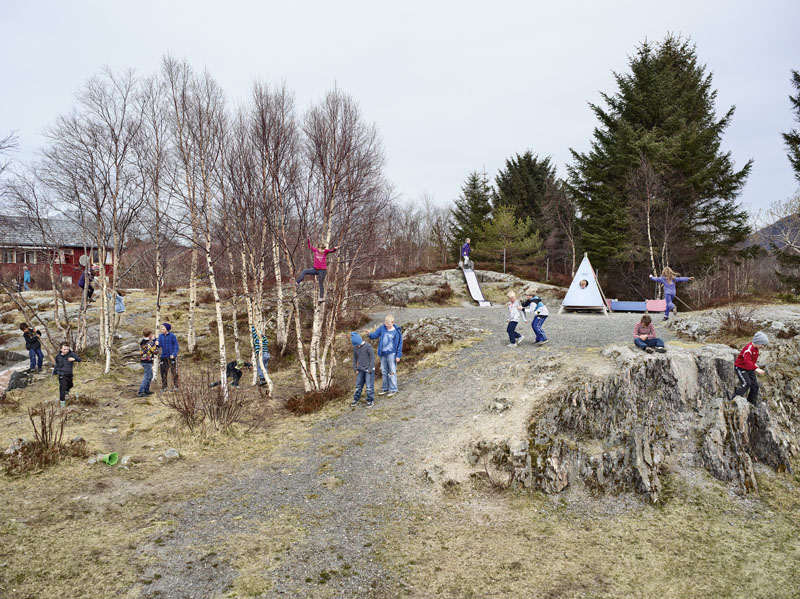 I was very impressed by the kids and the playground atmosphere in Norway. It didn’t matter how extreme the weather was; they all go out and learn through the experience of play. There are areas where they can climb trees or build camps from sticks and stones. 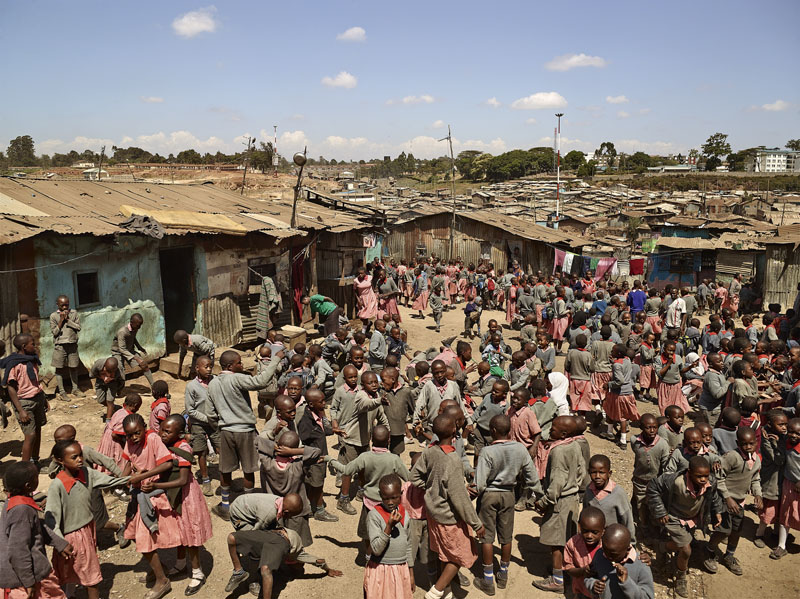 The schools in Kenya were quite amazing visually, with the many children and the colors of their uniforms. However, I remember talking to a headmistress in the slum school in Nairobi, and she was telling me how she would watch the kids to see how they were walking, because if they weren’t walking properly, that was a sign they might have been sexually abused.