The Museum of Art, Architecture and Technology (MAAT) in Lisbon, by Amanda Levete, may be a jewel, but it shows a complete and utter disregard for its context.

During the 1960s, a record number of people—120,239—left Portugal and headed east, to central Europe. These people were mostly young rural workers who left the country in search of better living conditions, to escape a situation of social oppression and colonial war. At the time, emigration was not seen as being permanent; rather, it was a temporary sacrifice, a means to an end. That “end” was these workers coming back with money in their pockets.

Male emigrants mostly took up construction jobs in their destination countries. They became bricklayers and concrete pourers, among other things. They learned how to build the central European upper middle class single-family house, the “Maison”. As their economic situation improved and the Portuguese authoritarian regime fell, emigrants were able to return to Portugal for summer vacation. During these stays, they started building houses in the same style as they built in their destination lands, showing a complete disregard for the different local building traditions and identities. The built “maisons” dramatically changed the rural landscape of the whole country, to the point where whole villages in central Portugal came to look like suburban developments on the outskirts of Paris, Frankfurt, or Geneva.

Migrants made use of the identity they had absorbed in central Europe, an identity they did not really understand but that contained the spirit of a life they envisioned for themselves. They built these “maisons” as their own monuments to their achievements abroad. It is with this history in mind that I see the new building of the Museum of Art, Architecture and Technology (MAAT) in Lisbon: a sort of corporate “maison.” It is a building that exists, in isolation, as the proud attempt to borrow an identity from an international sphere.

In the last 15 years, Lisbon has seen the large scale development of its riverfront. From west to east can be found: the Champalimaud foundation by Charles Correa, the new Museu dos Coches by Paulo Mendes da Rocha with Ricardo Bak Gordon, the MAAT by Amanda Levete in Belém, the new Energias de Portugal (EDP) headquarters by Aires Mateus and, still under construction, the new Praça de Goa and the new Cruise Terminal, both by João Carrilho da Graça. Of these projects, three were commissioned by private entities, two of them by the same client, EDP. Curiously, EDP realized two hugely different buildings, both in their architecture and influence on the urban fabric, while upholding the same corporate intentions.

Once a public utility company, EDP has been part of the Portuguese imaginary since immediately after the revolution. It was founded to serve as a tool for guaranteeing a democratic distribution network alongside a uniform cost for energy. It remained in public hands until 1997 when it was partially privatized, a process that was finally completed in 2013 when the state sold its remaining 4% shareholding. Currently, the largest shareholder is the China Three Gorges Corporation. The company has heavily invested in renewable energies, not only in Portugal but also internationally, to the extent that 60% of the profit the company generates is internationally sourced. Yet despite its current private, globalist character, it is still seen as a sort of national symbol by the Portuguese.

Because it is not bound by the procurement stipulations of a public company, and so can decline to conduct an open competition for new projects, EDP chose to directly commission Amanda Levete to design a new building for the MAAT campus. Granted, it is not uncommon to invite foreign architects to build in Portugal, but as Lisbon’s riverfront demonstrates, the results have been far from stellar. Two of the aforementioned projects on the riverfront, the Champalimaud Foundation and the new Museu dos Coches, years after their completion, still fail to find their audience. So why, in an area where foreign architects have attained the results they have, give this commission to a foreign architect? 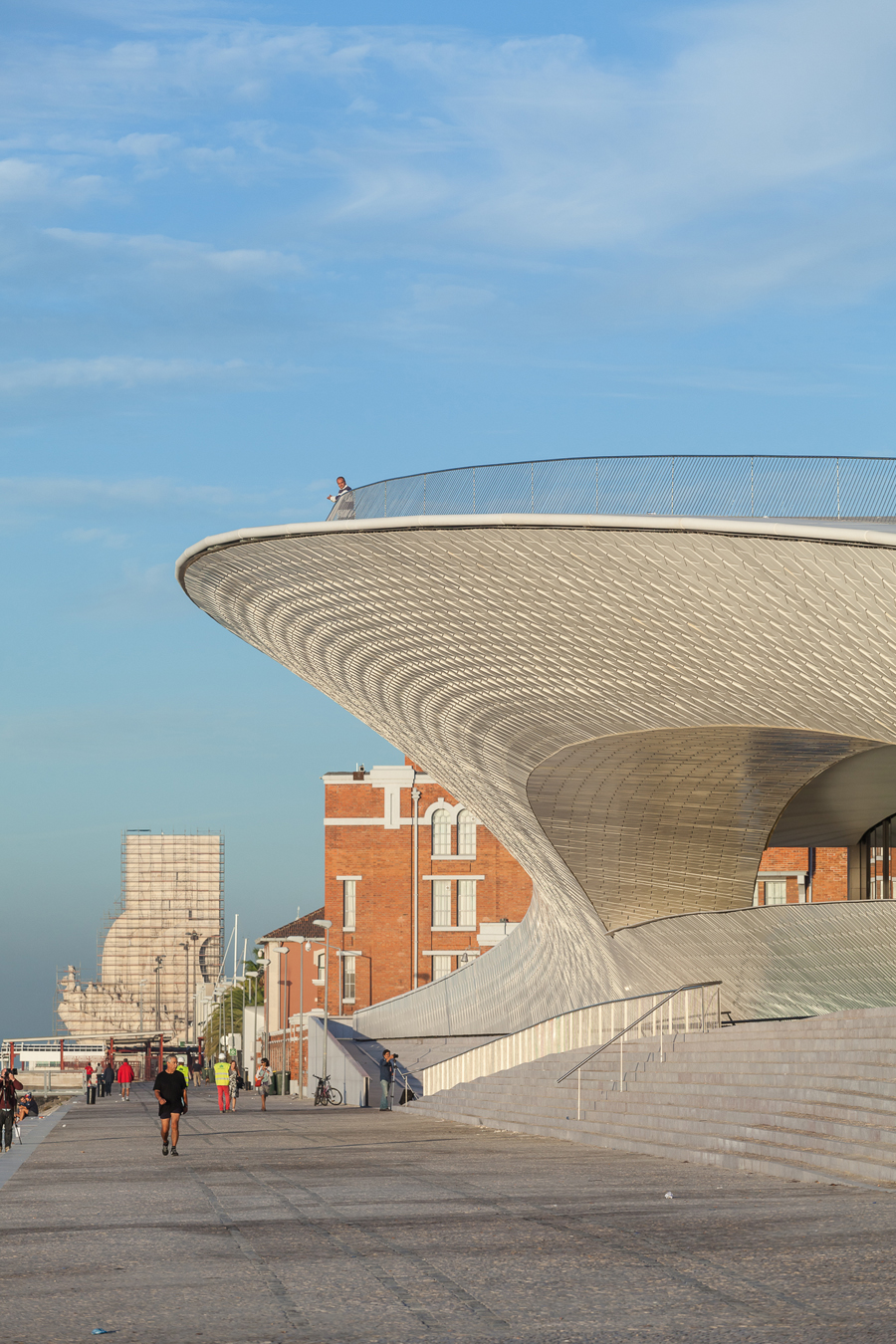 One could argue that a similar strategy was successfully implemented in another Portuguese city for another high-profile cultural building: Porto’s Casa da Música. It is important to make clear that, though the strategy was similar, Casa da Música’s era was different from the MAAT’s—as was the process through which OMA was awarded the project.

In the 1990s, Rem Koolhaas famously introduced a logic of “fuck context.” In the aftermath of Postmodernism, when the movement’s most necessary and stimulating ideas had devolved into the superficial use of a formal language disconnected from any conceptual meaning, Koolhaas’ message was deeply pertinent. This approach proved to be extremely freeing for architects and opened the doors to a new period of architectural production and research, one driven by the concept of an “architecture of market,” whereby the architect is the provider of a service demanded by a client, i.e. the market.

With his design for the Casa da Música, Koolhaas managed to, by bluntly avoiding any formal connection to the physical context, engender a whole new set of public spaces that would otherwise be impossible, regardless of the program of the institution. The form of the building brought additional qualities to a sector of the city that was slowly losing its identity. In this sense (and I think this is how we should understand Koolhaas’s attitude towards context), the place informs the architect’s intervention, it enriches it. One should just not put context above all else, should not allow it to act as an obstacle in the way of potential mutations in a city’s fabric.

Casa da Música is a great example of a positive interpretation of the premise of a market architecture and its attitude towards context. Unlike Casa da Música, the new MAAT does not offer a constructive dialogue with its surroundings through the confrontation of scales, typologies or formal language. It reduces its urban presence, a wrinkle in the riverfront. It treats its surrounding structures either as troubling neighbours one should hide (the avenue cutting the riverfront off from the rest of the city, to the north) or as old, retired ones, not worth engaging with (the refurbished power plant to the west, also part of the MAAT campus). There is a clear primacy of the idealized form, of the building as an isolated jewel, and an even clearer disregard for the surrounding buildings and everything they mean, regardless of the intentions Levete claims to have for the building.

In her project description, Levete speaks of the museum as “A simple and organic gesture [that] creates a topographic form that blends into landscape, making a fluid and natural relationship between inside and outside—people move over as well as through the building.” Levete’s conception of public space becomes painfully clear—it is a space of movement. This follows liberalism’s understanding of public space, one of circulation, not of permanency, not of fruition, and definitely not of appropriation. This is also the the case with the museum’s rooftop. The idea was, as the initial renderings of the project suggest, that the garden that already runs along the river would be continued upwards, covering the new museum. By raising the pavement in order to enable the MAAT to hide under it, a slope was created. The nature of this slope makes it impossible to use it as anything other than circulation space; people go up, look around and come down again. And any remaining fantasies of public space have been now erased by the presence of private, EDP-paid security guards and “traffic” signs forbidding any activity on the rooftop. 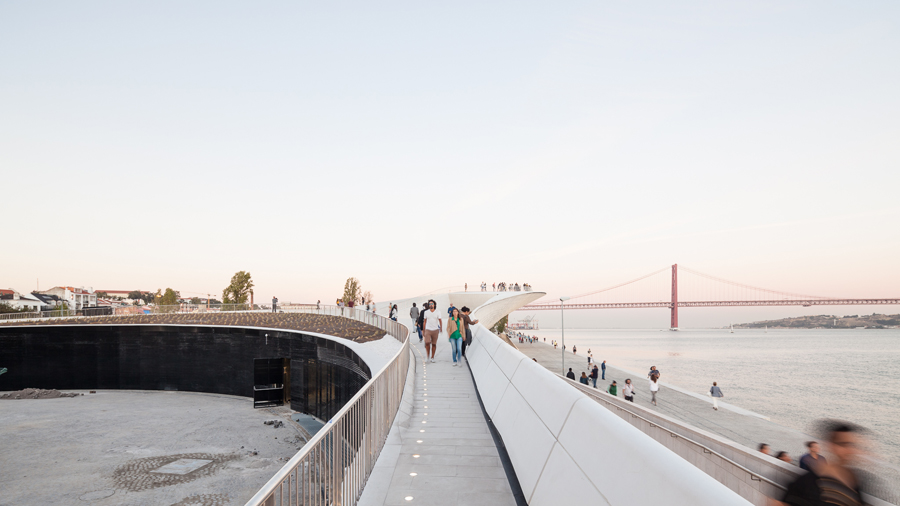 The building design is guided by two gimmicks: one of connection with the other side of the avenue, where the area’s historical center still exists, and one of openness towards the river. The connection to the historical centre on the other side of the avenue is necessary and I applaud the effort, but it is not a footbridge—clumsily placed in front of the Museu dos Coches, and forcing a path to the new MAAT—that can solve the problem. It might help but it remains a patchwork solution. A more satisfactory solution would have necessitated more drastic measures, involving the institution of car and train traffic regulations in the area or even  repositioning  road and train lines altogether. And then the openness to the river, the building’s photogenic curvilinear roof that raises toward the Tejo, is nothing but an advert repeated to exhaustion. Aren’t the views of the river, especially in Belém, already exposed enough? The museum is placed practically on a boardwalk, about 2.5 miles long, that extends from the docks to the Padrão dos Descobrimentos. How could it be more open or expansive?

I must say the program of the museum is impressive, with 18 planned temporary exhibitions and an ambition to provoke a multidisciplinary exchange at both a national and international level. The exhibition spaces actually work well and their atmosphere is agreeable. But these aren’t enough to bridge the gap between the project’s design intentions and the program. This misalignment becomes extremely clear in the circulation spaces, both outside and inside. The museum pathways and corridors are nothing but residual spaces between the form of the building and its physical limits and constraints. This strikes me as inconsequential to say the least, especially at a time when circulation spaces have become places where dialogues are created and public space duly exists (See: the extension of the Kunstmuseum Basel, the renovation and extension of the Berlin Museum Island, the new Neue Galerie in Berlin, etc.).

The MAAT is the latest example of what happens when the good intentions of a privately owned institution are trumped by their marketing thirst. EDP used Levete’s spectacular object as the vessel for its wow effect. Much like the Portuguese migrants did themselves with the “Maison.” But while migrants were unaware of the effects of their buildings, besides the most immediate and personal ones, both Levete and EDP have the responsibility of knowing that their choices have meanings, costs, and consequences that go way beyond simply building a museum. From where I stand, what they chose was to create a self-centered corporate monument, a serial product of the current global neo-liberal agenda that, in its search for an iconic status, ends up being generic. A building that, just as the maison, might as well be built in Paris, Frankfurt, or Geneva.

If you liked this post, you may enjoy our review of Office KGDVS’s Dar Al Muharraq Cultural Center in Bahrain.