Q&A: Cara Michell and Courtney D. Sharpe on the Urgency of the Black in Design Conference

The organizers of the long-overdue symposium explain how the event addressed social injustice through design. 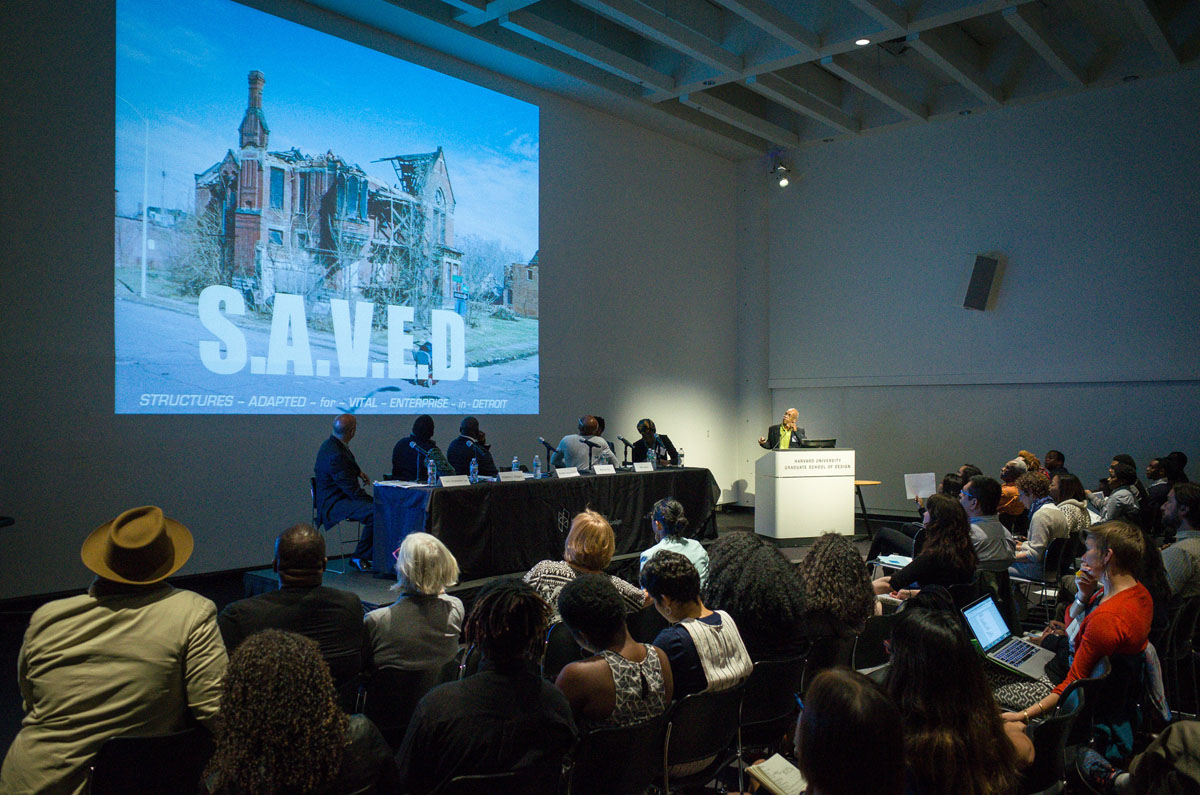 The Black in Design Conference was held on October 9 and 10 at the Harvard Graduate School of Design.

Black artisans were instrumental in building the foundations on which this country stands. One need only remember Lewis Howard Latimer, who invented the incandescent filament that revolutionized electric lighting, to grasp the full ramifications of such contributions. Yet exclusionary trade unions and the advent of formal education and licensing bodies made it especially difficult for African-American craftsmen to gain a foothold in architecture and the design professions. This meant that diverse voices were absent from many of the federal, state, and local urban planning and public policies that have affected communities of color.

Last October, students at the Harvard Graduate School of Design (GSD) brought together current practitioners and future designers for the inaugural Black in Design Conference. Over two days, speakers including award-winning architect Phil Freelon and 2014 National Olmsted Scholar Sara Zewde explored the state of diversity in architecture and design and the steps needed to create equitable spaces for all. By all accounts, the conference was a success. Tamy Cozier spoke to the main organizers, Cara Michell and Courtney D. Sharpe, about the event, which they deemed a long-overdue symposium on addressing social injustice through design.

Tamy Cozier: Explain what the idea behind the Black in Design Conference was.

Cara Michell: It was a conference that had two angles. The first was to celebrate the contributions of African-American designers and then, on the other hand, to start opening up conversations about what design can do for social good and issues that are impacting the African-American community in particular.

TC: What was the evolution of going from an idea to a full-out conference?

Courtney D. Sharpe: The idea started a couple of years ago. It was born out of the African American Student Union (AASU) at the Harvard Graduate School of Design. Last year, Cara and I volunteered to co-chair the conference, and we really started picking up our planning efforts and creating a committee to help us bring it to fruition in the spring. We got more people involved, and the school came on board with the programming, too. So it was just a gathering of momentum as we went into summer and worked on the conference.

TC: This inaugural conference featured a range of voices, including architect Phil Freelon, who is best known for the Smithsonian’s African-American history museum, which opened this fall. Metropolis profiled him in 2006 at a time when African Americans in architecture made up about one percent. Ten years later, is that number any different?

Courtney D. Sharpe (left) and Cara Michell (right) are both second-year students in the master’s in urban planning program at the Harvard Graduate School of Design.

CM: right. TC: So why are race and diversity so important when it comes to architecture, urban planning, and other related fields?

CM: Courtney and I are both in the urban planning program. So we spend a lot of time thinking about how planning policies—the way infrastructure has been developed in the United States—have really cemented and made more systematic the kind of segregation that we see today. For example, the big interstate-highway acts repeating the destruction of many African-American communities, the actual physical segregation of a lot of cities around the country, redlining, predatory loan practices—these are all very closely related to the way we engage with the built environment, housing, homeownership, where we live, what kinds of structures we’re dealing with, and whom we see in those structures.

CDS: Yeah, seconding what Cara said, I feel like one of the experiences in the built environment is that people often don’t question it and treat it as a given versus something we can offer feedback on. So when you ask, “How does infrastructure play into this?”—infrastructure is everything! It is the subliminal context that we’re all living in.

TC: In order for the number of blacks in design fields to increase, enrollment at universities would also have to increase. From an education standpoint, what are some of the obstacles?

CDS: Personally,I think one of the obstacles for people, specifically African-American people, is this country’s education system. If there’s a lack of quality STEM education, a lack of art education, it makes it harder to find people who are not only interested in but also qualified for design programs. There are lots of really talented kids, but if they don’t have teachers who can help them develop their gifts, then they’re at a disadvantage from the start. But making sure that people have access to quality education at an early age can provide a better pipeline into these programs and fields.

CM: One of our goals during the conference was to make sure that we provided free tickets to high school students who wanted to attend in order to give young people an opportunity to see people who look like them and who might have similar backgrounds, who are also doing amazing things in design.

CDS: There are a lot of career paths that just aren’t what people regard growing up. I feel like I live in a country where, for better or worse, people still think of doctor, lawyer, teacher; anything beyond that is, like “Oh, what?” So being able to see a role model who reflects your own aspirations and background in a field that you might not have otherwise considered is really important.

TC: You both study urban planning. What drew you to that field?

CDS: For me, it was kind of a winding path. When I was a kid, I used to make maps, and I had a database in my PalmPilot software where I kept track of all the houses on the way to school. I originally wanted to be an architect, but then I guess I scared myself out of it when my home life got a bit chaotic the last couple of years of high school and my grades in math started to fall. So instead of continuing with that path I pivoted and wound up pursuing a more “standard” course in the humanities. Then, after undergrad, I wound up in the Peace Corps, and I had a seemingly small conversation that was really life-altering with a volunteer who was telling me she’d never had zucchini until we were in this desert village. So I started exploring world hunger and American food systems. I ended up getting a fellowship where I was able to explore food deserts in Chicago, and from there my eyes were really opened. So I decided to explore these issues through urban planning.

CM: I also wanted to be an architect for a long time. I remember when Google SketchUp first came out, I would model houses in my free time, but in undergrad, I sort of made my way to urban planning through a lot of the research that I was doing around urban issues such as segregation and urban inequality, and the way that the built environment contributed to these problems. 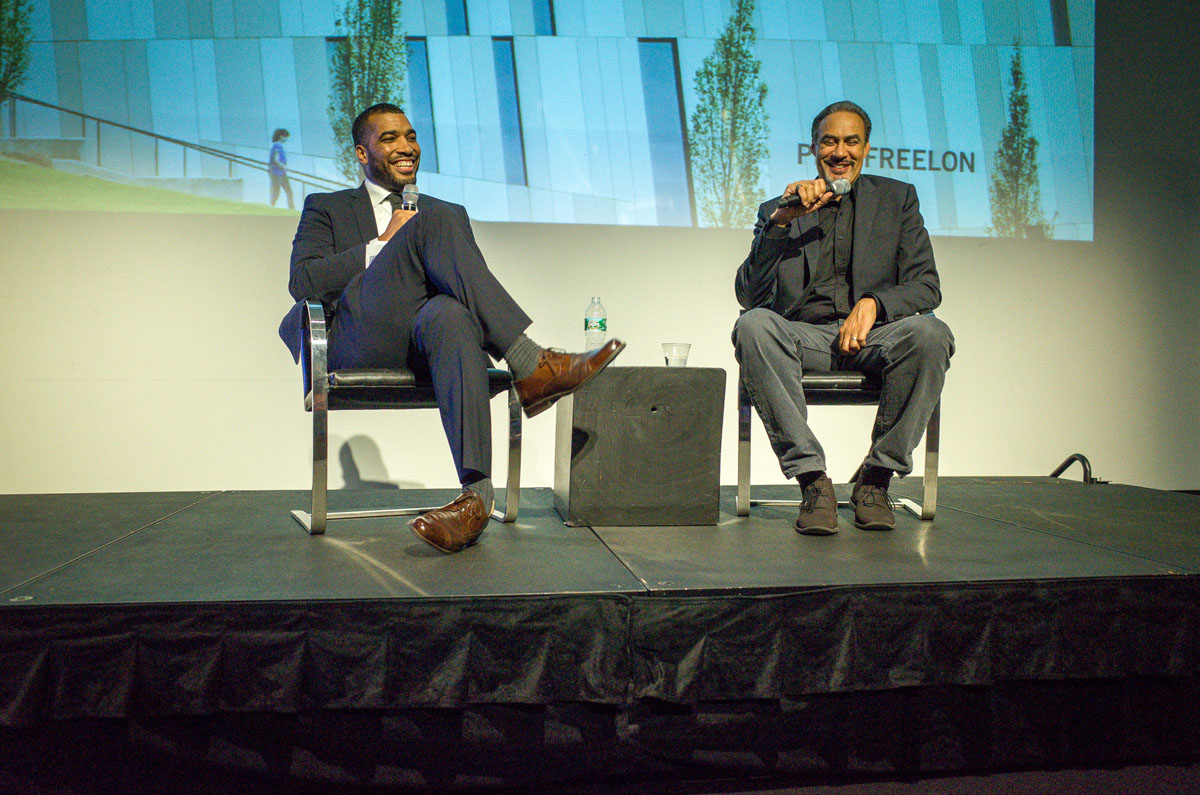 TC: Do any of your family members have a background in architecture or design?

CM: My grandmother was very active in historic preservation in Washington, D.C., so I feel like that had a little bit of an impact on me.

CDS: My granddad was actually the first black staff artist with the U.S. Bureau of Engraving and Printing, and he designed stamps for a living. So growing up, I was surrounded by art and design.

TC: Do you think your program at Harvard prepares you to tackle race and social problems via your future careers in urban planning?

CM: I think there’s some work left yet to do within the program to adequately prepare us in that way. This was one of the reasons we wanted to have the conference, so we could start bringing to light some of those issues that I think are often overlooked in our syllabi at the GSD.

TC: In the two years of planning for this conference, have you seen any changes in terms of the administration introducing a more diverse curriculum?

CDS: Yeah, the conference really amplified some of the concerns and issues we’ve been raising. So the school’s been really excited and listening and wants to figure out how to best support us, and also how to get more speakers or to get more similar conversations going.

TC: Social problems in this country are at an all-time high, with instances like the incidents in Ferguson and Baltimore highlighting some of our deeper issues with race. What can practitioners in design fields and universities take away from these occurrences when it comes to the social and built environment and how it impacts marginalized communities?

CM: For me, it’s just the acknowledgment that design is political. You can’t design a building, especially if you intend for that building to be constructed, without considering its social impact, or without considering how people’s varying racial, ethnic, cultural, and economic backgrounds are going to engage with that building, not to mention how that building might attract existing power dynamics between people. That’s all embedded within these structures that we’re creating. We can’t continue to ignore it.

TC: What are you hoping to accomplish with this conference as it continues and grows?

CDS: We want to really build a community, because I feel like we are so scattered across the nation, and we are so small in number—like, literally, we are the two percent—so we want to try to find strength in this number by bringing us closer together. 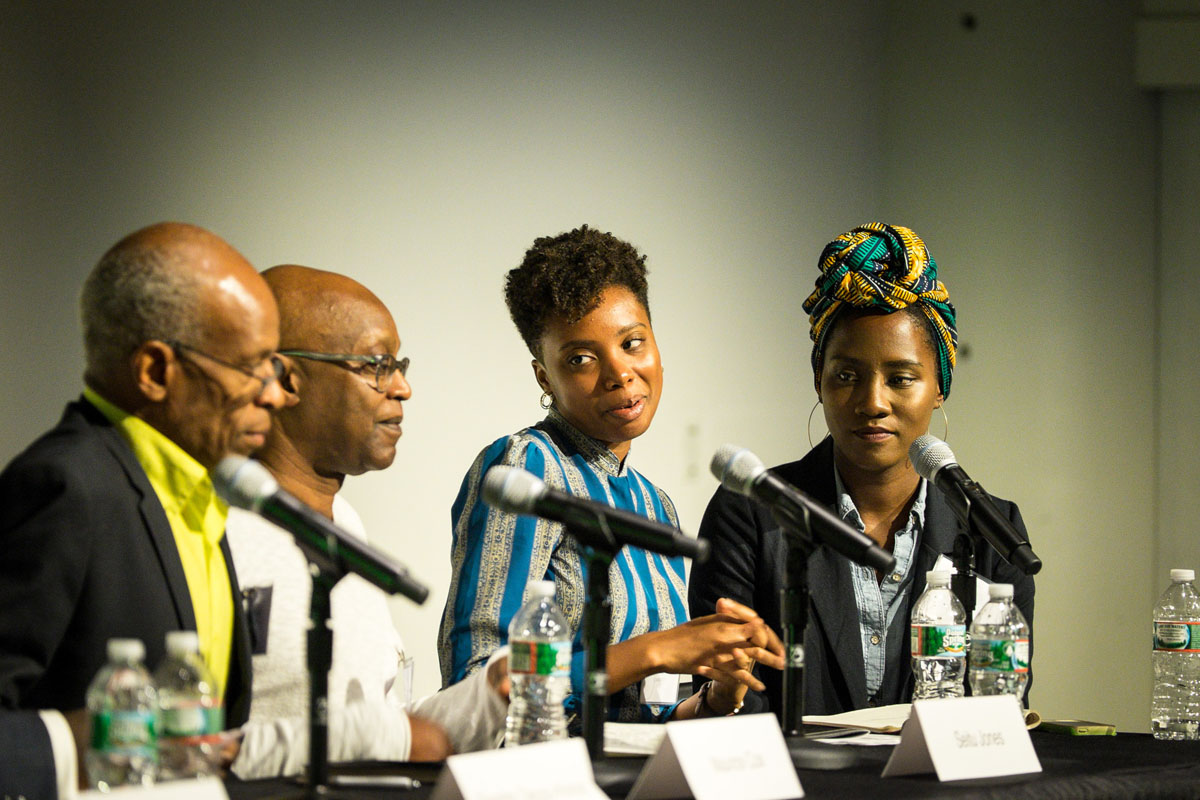