Q&A: Jeremy Myerson on the Real Meaning of Inclusive Design 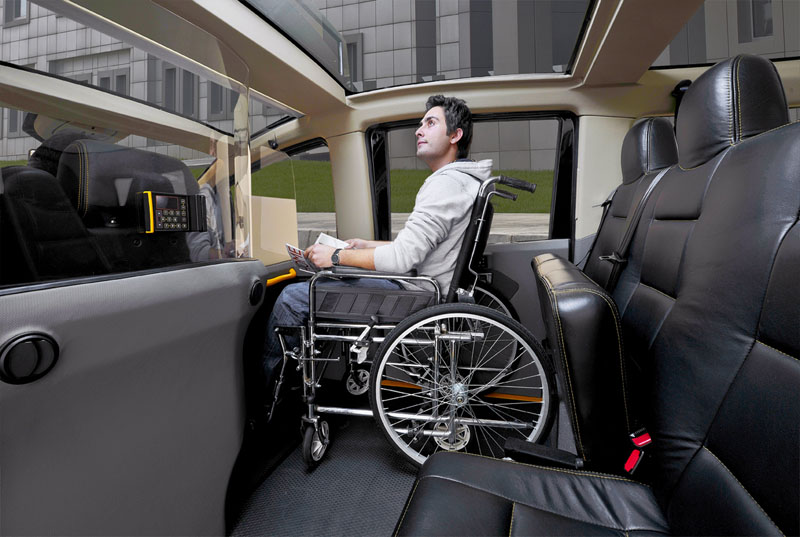 The Helen Hamlyn Centre’s (HHC) design for the interior of a fully inclusive taxi for London, with Hexagon Studio and vehicle maker Karsan.

All images courtesy the Helen Hamlyn Centre for Design

The Helen Hamlyn Centre for Design at London’s Royal College of Art is one of the world’s premier research centers for inclusive design, focusing on three areas: Age & Ability, Health Care, and Work & City. Here, the center’s cofounder and director, Professor Jeremy Myerson, talks about changing trends in his field.

Avinash Rajagopal: This July marks the 25th anniversary of the Americans with Disabilities Act (ADA). How far have we come in those years?

Inclusive design has moved on immeasurably. It’s not just about access to the built environment for the physically disabled, it’s access to a whole range of things—for people who might be economically excluded, culturally excluded, or technologically excluded. And it’s looking less at the abilities or disabilities of a person, and more at the opportunities in relation to the environment.

AR: Are we finally moving away from a legislation-based model?

JM: Universal design is an expert-based mindset. But people are not passive subjects or consumers who are having things done to them by design experts. What the inclusive-design movement has promoted, certainly in Europe, is the idea of designing with people—co-design, co-creation. That’s a big change.

There’s an aspect of universal design that is very mono-dimensional: “What are their deficits? What are their needs?” It never addresses the strengths. Inclusive design is a strength-based approach. It’s designing with people as opposed to designing for them—not just older people or those in wheelchairs, but all kinds of people who are marginalized by the design process. 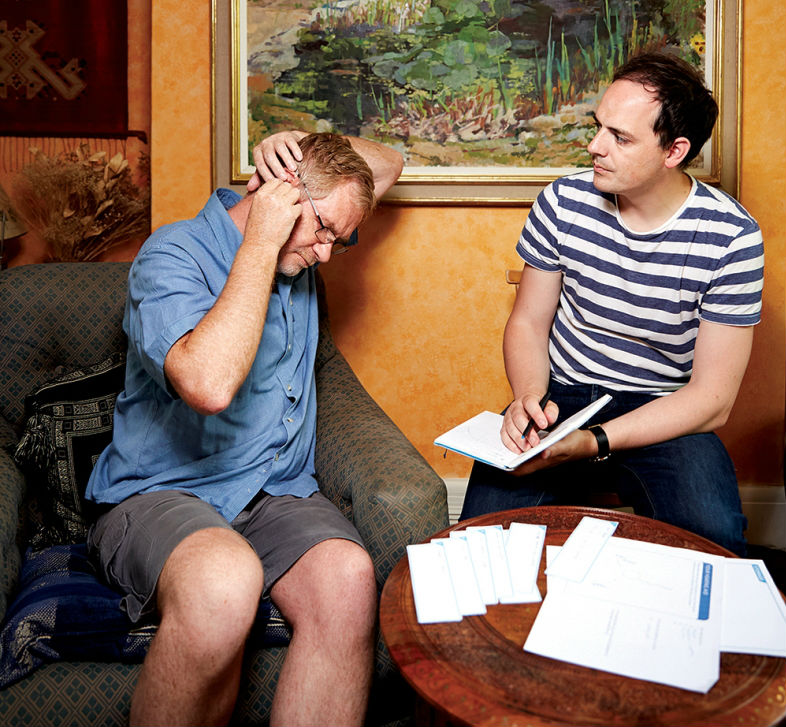 An HHC research project assessed how users used and maintained their hearing aids.

AR: What are some of the tools you’ve used to make inclusive design more participatory?

JM: The tools have evolved from standard industrial-design practice. Traditionally, social sciences captured the requirements and then threw them over the wall to industrial designers. Architects are even worse because they just have a client who tells them: “This is what we want.” And they make a program around it.

What we’ve tried to do is not turn designers into social scientists, but just give them some basic ethnographic tools and techniques. So our designers will shadow somebody for a day and make a timeline of what they’ve done. They’ll map a process and really get it down, by doing a lot of observation and ad hoc interviews. It’s not about looking scientifically at the situation, but being empathic, putting themselves in somebody’s shoes. We do a lot of role playing, such as having people wear goggles to simulate visual impairment and walk through the streets with long canes.

We also do this thing called asset mapping, which we did for a housing-estate lighting project, asking people to draw where they wanted light on the estate. And then we showed them the grids of where the light actually was, and there was no correlation. You could see it immediately—you didn’t need a six-month ethnographic study.

We also talked to people with different ethnic backgrounds—there was a big Bangladeshi community and the women were saying, “I cannot be seen out on my own, and I’m frightened. I can’t take my children to that park, because there’s loads of white teenage boys there, and they’ll look at me.” You begin to realize the cultural construct of the housing estate, why there are a lot of problems, and why people feel excluded from the public realm. It’s a very long way from ramps and steps—what the ADA is all about.

AR: What else has changed in how we think about accessibility?

JM: Another big shift is to do with technology. Because of digital platforms, we’re collecting more data about people. A designer could work with eight to ten people—you don’t need a massive population study. Big data is going to have a huge influence on inclusive design.

People are also going to have a lot more data about their own bodies, their own performance. And we’re going to be able to 3D print custom solutions. The next stage is going to be personalized design.

What’s more, the ADA was very much about physical disabilities. But there’s so much more—autism, dementia. A lot of older people will still be on their feet walking around, but then they won’t know where they are. With longevity, people’s minds are packing it in before their bodies.

AR: How should we be addressing these cognitive disabilities?

JM: There’s a severe need for sheltered housing for adults with autism—those with severe learning difficulties, often with limited or no speech. We’ve been working on this with a charity in the U.K. called Kingwood, and all the rules of inclusive design don’t seem to work. You can’t interview people, and they all have one-to-one caregivers. So we’ve had to develop a whole series of new techniques to reach these people and involve their family members and support staff in a triad of relationships. It makes you think about design principles from the ground up. 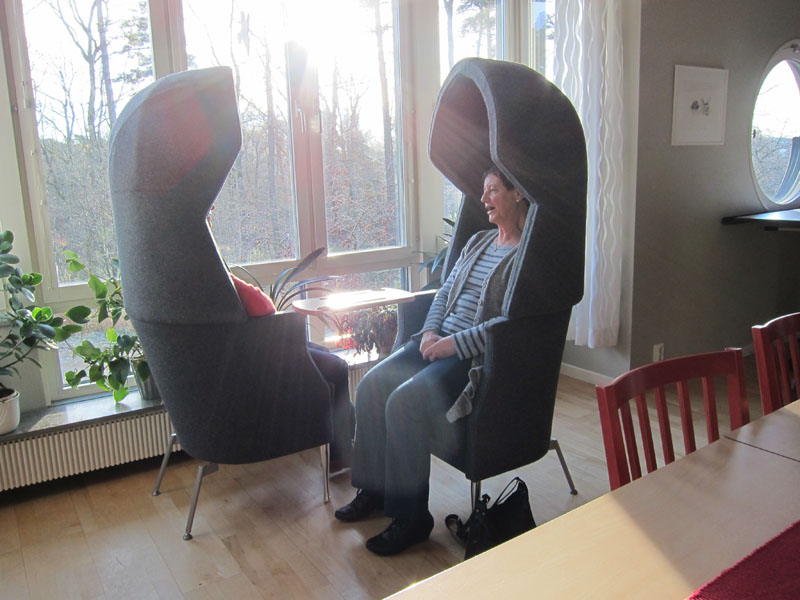 AR: The Helen Hamlyn Centre has always brought corporate partners into its projects. How much can we really expect industry to take on in terms of inclusive design?

JM: When you talk about inclusive design, it means you’re going to produce something at the end that is inclusive. The outcome could be an object, system, or service, but inclusive design is about asking the right questions.

When we started universal design, it was all about finding answers. now, it’s about defining problems in a new way, then reframing them, and allowing industry to find the answers because the case is compelling. A lot of industrial design and architectural projects are very elegant solutions to the wrong problem.

AR: How does this translate to public policy and the urban realm—things that are not in the hands of corporations?

JM: Take housing for older people. Most older people don’t live in specialist, care, or sheltered housing—a lot of them live in regular housing, which is very inappropriate for old people. In the specialist-housing center, there’s a lot of learning, and fantastic age-friendly environments, but none of that goes into the housing code. That is a role for public policy.

AR: If we had to think of a new ADA, what would be some of the key considerations?

The bigger challenge is adapting to a more democratic, participatory approach, rather than being the top-down experts. Industrial designers have taken to it extremely well, but architects are struggling. There was a fantastic project by students at the Royal College of Art who rethought the little figures on architectural models. So there was the pregnant mom with the cigarettes, the teenage mother, the drunk, the violent football hooligan—all these social outcasts. They were trying to make architects think about real people in real social scenarios. That’s what inclusive design is about. It’s not just including people in the built environment or the use of products, it’s including people in the process. But I would never legislate for designers to have to do that. That would be counterproductive.