The architect talks about museum design, the new Whitney, and why buildings should “talk to each other.”

There’s a reason why Renzo Piano is known as the master of museum design. The architect has designed 25 of them, 14 in the U.S. alone. Few architects understand as well as Piano—along with his practice, the Renzo Piano Building Workshop (RPBW)—what board directors, curators, and even the visiting public needs and wants in a cultural institution like a museum. When I spoke with Donna de Salvo, chief curator of the Whitney Museum of American Art, whose new downtown digs were authored by RPBW she remarked on the how the curators’ input was often incorporated into the final building design. “Our curators and the architects had an ongoing dialogue throughout the design of this building,” de Salvo says. “The physical needs of the art were a priority for Renzo and his team, down to the most seemingly minute detail. Our curatorial voice was central to the discussion and has given us a terrifically dynamic building, a uniquely responsive array of spaces for art.”

But what often goes unmentioned is how well Piano’s buildings, particularly his museums, connect to their surroundings. The buildings not only perform well, but they integrate themselves into the life of the city, as if they have always been there. From Beaubourg to The New York Times Building, they fully embrace the space and energy of their urban contexts. Now, as two of his newest and very high-profile museum projects near completion—the renovation and expansion of the Harvard Art Museums (due to open this Fall) and the Whitney Museum of Art (expected to be in use by Spring 2015)—I had a chance to meet with Piano at his Meatpacking District office to talk about the creative process, criticisms, contemporary architecture, and “flying” buildings.

Paul Clemence: I look around your office and models are everywhere! From miniatures of entire buildings to blown-up structural details. Considering the integration of 3-D modeling software in architectural practice over the last decade, are models still essential to the preliminary design process?

Renzo Piano: Doing one of these rough models is the same as sketching. The model is three-dimensional version of a sketch. With the computer you need to tell it exactly what to do; where to start, where to stop. When I am doing the sketch, I don’t have to tell the sketch where to start, where to end. It’s instinctive. Sketching, like the model, has the quality of imperfection. Neither has to be precise. It gives you freedom. It gives you the possibility to change. The computer is perfect in the moment when you cannot be perfect. Making models and sketches is very important in this early part of the process, because in the beginning it is never precise—if you have to be precise you can get trapped in the shape, in the form. And you have to remember that the model is just a fragment—the only place where it all comes together is the mind, even with things like proportion and scale. One of the biggest mistakes an architect can make is to get scale wrong. 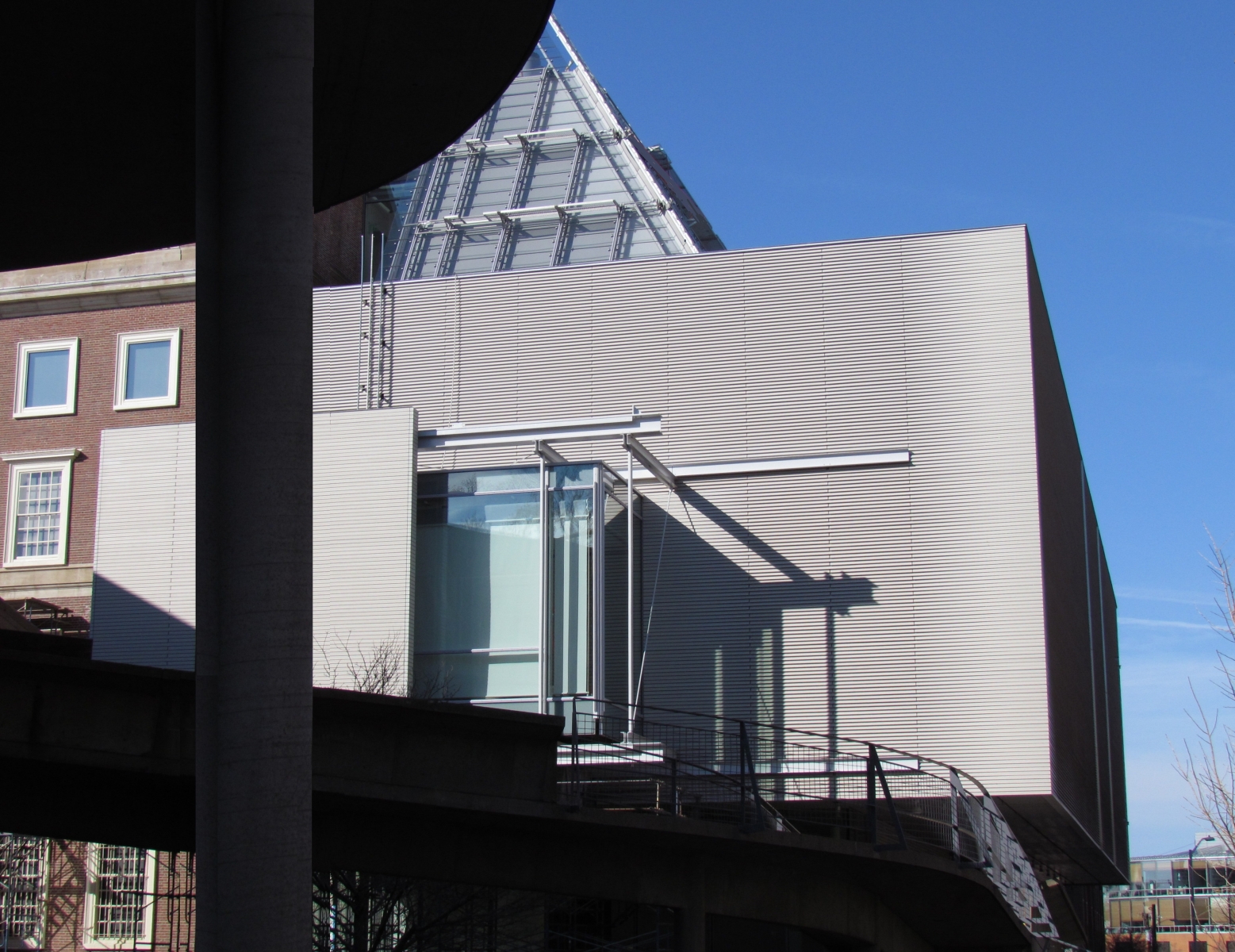 Piano’s new wing for the Harvard Art Museums, with the curving ramp of Le Corbusier’s Carpenter Center in the foreground

PC: Then there is a very long road, many years, from imagining a design in your head to it becoming built reality. What are your thoughts on that process, of the idea only coming together in the real world so many years later?

RP: That’s a struggle! Architecture relies on long time, always, both in construction and in recognition. Architecture is not something that is typically recognized or understood the first day. Architecture is not fashion. I have nothing against fashion, but I mean that fashion happens more suddenly, faster. Architecture takes longer to be understood, like cities, like rivers, like forests—it takes time! A building can take a long time to be understood and loved. With Beaubourg [the colloquial name for the Centre Pompidou in Paris] it was like that—there was a lot of negative reaction when it first opened. It took the Centre Pompidou 10-15 years to be accepted by the city. Sometimes it takes less. The handicap of a new museum is just that, that it’s “new.” It has not yet gone through the ritual of day-to-day life in the city. It takes time for a building to be loved and adopted by the city. Whether it is a theatre, university, museum, or a church, the building has to become part of the daily life of the city to be accepted.

PC: A new building fundamentally brings change to a city or a part of a city, and that is not always easy to accept or even understand.

RP: As an architect, if you are lucky enough, good enough to find yourself in the right place at the right time, you witness by what you are doing a change and that is never easy, because people don’t like change. The architect is interpreting that change. The art of living, staying together, is in constant change. As an architect you can not be so arrogant to believe you made that change. But if you spend your time observing society and community then you become the witness to the change, an interpreter of the change.

PC: One of your latest projects is the expansion of the Harvard Art Museums, which are located just next to the Carpenter Center for the Visual Arts  (Le Corbusier’s only building in America). Your plan included bringing the Fogg Museum, the Busch-Reisinger Museum, and the Arthur M. Sackler Museum all under one single structure. It’s an interesting approach and a complex that will change the atmosphere of Harvard’s campus. More broadly, how do you see this project affecting the wider Cambridge community?

RP: Opening the existing structure to the public square to the passage of people, creating a ground floor that is totally public—those were the goals of the project. It will bring change to the spirit of the relationship between Harvard and the Cambridge community. Philosophy and history are part of where you start a project from and in the Harvard project, you can’t forget the history of the social relationship between Harvard and that community. The connection has not been fine for a long time, and you have to find a way that could help with that.

PC: What was the big opportunity here? What about the site and the existing building fabric led you to your solution?

RP: I was surprised to find a piece of the Montepulciano inside. [Piano refers to the Fogg Museum’s courtyard, which is modeled on a fifteenth-century facade of a canon house in Montepulciano, Italy.] Usually when this [the replica of an older, historic typology or detail] is done, it can be a bit kitsch, but in this case it was done very well, in the right scale. I immediately thought that should become the center of the new plan, to make it the center of gravity of the project. We wanted to make the museum, which is also a study and art center, a real public building. We wanted to keep the ground floor totally public and open, so the people that live in the area and people on campus can enter and pass through it without any intimidation. It’s a gesture of openness, accessibility, of sharing.

PC: Change also is a theme at the Whitney project, which is moving downtown.

RP: Yes, it’s moving from uptown to downtown, back to where the institution had originated [in Greenwich Village] and to a place more similar in spirit to the institution’s beginnings.

PC: Some people have said that the northern façade is not looking as exciting at it could be, that it does not make a enough of a gesture towards the city. How do you respond to that?

RP: First, we have to wait and see, the building is not ready yet, of course. A building like this is like a meteorite, but a gentle one. It does not destroy anything—actually it uplifts. But it lands, and it is something new there. People should wait for the building to be finished and see.

PC: Do you feel you have learned anything from criticism?

RP: It’s a funny thing—as an architect you have to keep focus; but you also have to have to listen. And to recognize the good voices from the bad voices, and that is very difficult because sometimes the important voices are hard to hear. As an architect you are always learning—it’s a long, long apprenticeship! It’s a long path for an architect. You need to be good in so many things, in poetry, in building, as a civic person. 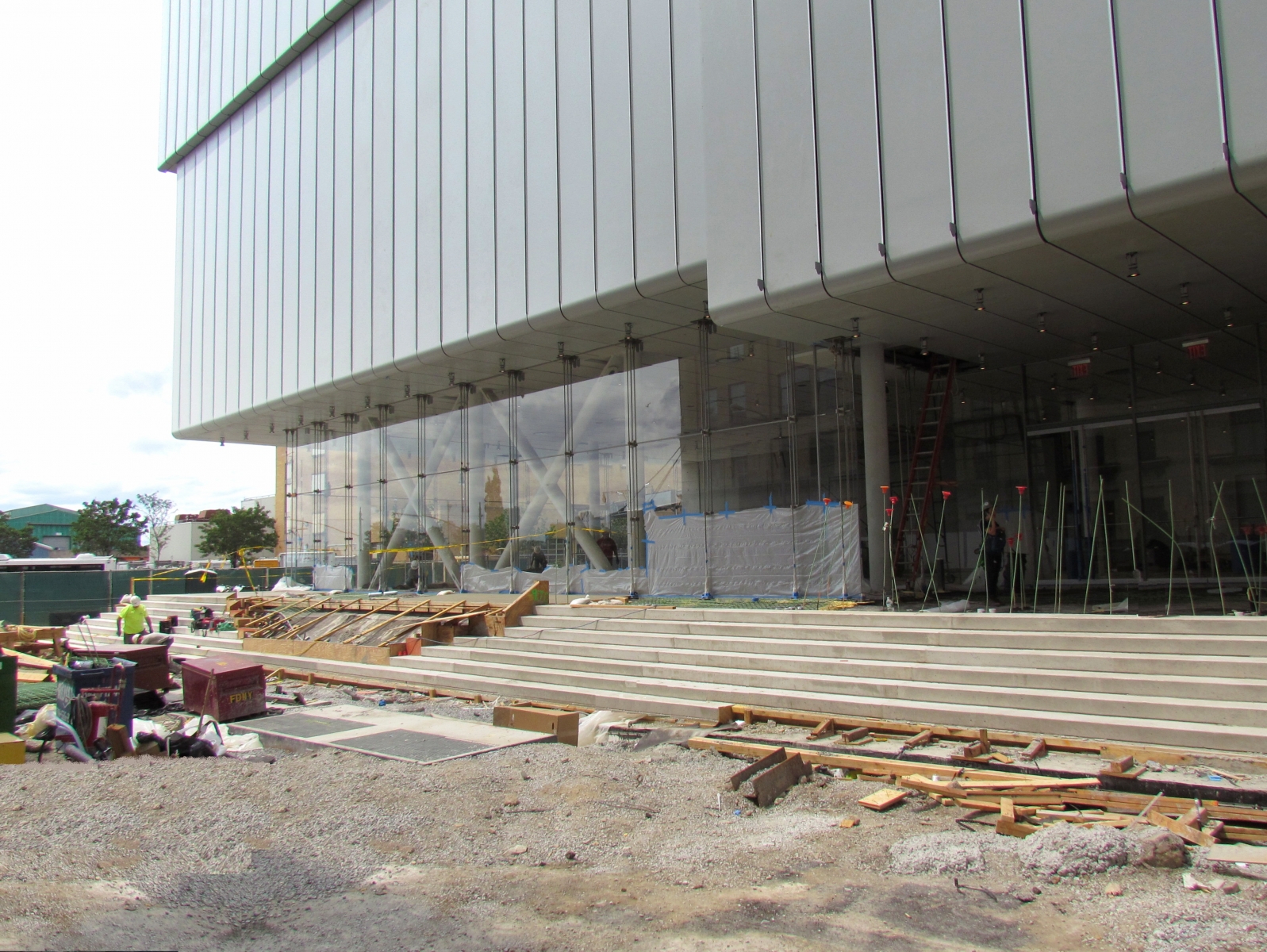 The main entrance of new Whitney, which faces the West Side Highway

PC: On that note, most of your projects—Beaubourg, the Nasher Sculpture Center, The New York Times Building, the Harvard Art Museums, and the Whitney—they all connect to the city grid in a very special way.

RP: But that’s because I am Italian. The city is under your skin—as an Italian you grow up with this idea that cities are places where buildings talk to each other. There’s a dialogue between the building and the street. It’s about accessibility, it’s about civic life. An urban person is a person that knows how to behave with civility, how to share, how to be accessible. A building should be like that. It should talk to the city, talk to the people. Buildings like this allow people to share experiences together, to enjoy and share life. Speaking together is a form of acceptance and the beginning of tolerance, which is the secret of civic life.

PC: And how do your buildings accomplish that?

PC: What excites you today about architecture?

You have to accept the dialogue. But accepting a dialogue doesn’t mean you have to do what people tell you to do, but you have to understand. This is part of the essence of our job. A good building is always telling a story. There’s a narrative. That’s why writing or making a picture or being an architect is not that different. You need a good story and good writing. You need to have both.