Koolhaas’s 15-volume look into
architectural elements is exhaustive and exhausting, mad and maddening. 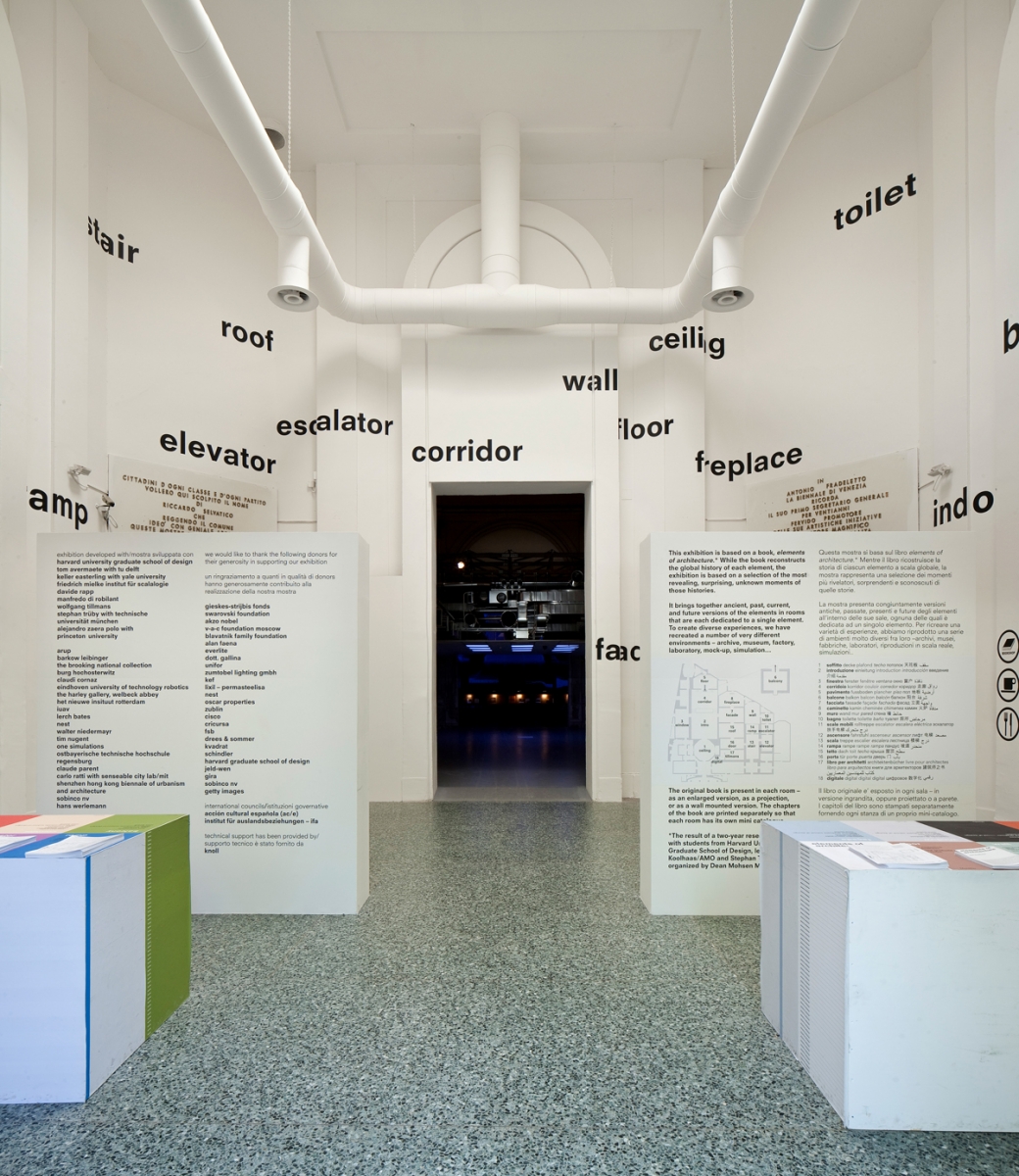 A constellation of Koolhaas’s “elements” stamps the entrance vestibule of the Central Pavilion. The exhibition was the backbone of the architect’s three-pronged agenda for the biennale.

“An exhibition is not a book and a book is not an exhibition,” reads a nugget from the Fundamentals catalog, the blueprint for Rem Koolhaas’s Venice Architecture Biennale. The disclaimer, the sort one has come to expect from any Koolhaasian enterprise, is actually intended for Elements (Marsilio, 2014), a 2,336-page block of texts that anchors the sub-exhibition of the same name (Elements being the yolk to Fundamentals’ flabbier albumen). Prepared by OMA’s research outfit, AMO, in collaboration with a multiyear studio from the Harvard Graduate School of Design and a team of collaborators, it is a technophilic treatise on the state of architectural thinking in the twenty-first century.

Despite what Koolhaas or his band of editors says, it isn’t easy to disentangle Elements (the ambitious, overreaching, maddening book) from Elements (the ambitious, overreaching, maddening exhibition). The book is spliced into 15 booklets measuring from slim to paperback-like thickness, each one devoted to a single element. Anecdotes, timelines, and other marginalia delineate the evolutionary trees of architectural components like the ceiling or wall, from their ancient—in the case of the fireplace, prehistoric—beginnings to their digital progeny. This method of analysis was first developed in Delirious New York (1978), whose idiosyncratic study of elevators and other modern building apparatus prefigures the ennobled display of 2014’s Elements. By mining the shadowy histories of these technologies, by tackling them from all sides, Koolhaas hoped, then and now, to produce a “delirium of interpretation[s]” capable of recharging the “worn, consumed contents of the world.”

Delirious New York, however, appeared at the crest of a tidal change in architectural thinking and culture. At Venice, some 40 years later, Koolhaas’s provocations can be construed as conservative, and his argument banal. Indeed, the “back to basics” proposition contains whiffs of a reactionary, even desperate pragmatism. Today’s architecture, Koolhaas defiantly reported to biennale attendees in June, “is not in particularly good health.” All the more reason, then, to “sever all connections” to the diseased host and start again from new principles. The posturing was preposterous, and the logic, a dead end. As a rueful Peter Eisenman warned, Koolhaas’s glorified kit of parts leads to the end of mythology, “the end of everything, the end of architecture.” French architect and blathering heretic Francois Roche fanned the critical flames, demanding, “who gave Rem the authority to take part in the burning of the discipline?”

Biennale president Paolo Baratta evidently did, after a protracted period of Koolhaas playing hard to get. The typical preparation period was extended from two to four years to accommodate the architect’s ambitious program; Baratta also seems to have facilitated the several corporate sponsorships necessary to the exhibition’s realization. A large Rolex logo pops up in the opening pages of Fundamentals, followed by a smaller constellation of corporate insignia. It barely registers as a criticism, and one surely can’t fault Koolhaas for this “Faustian” pact. If anything, the scenario amplifies Koolhaas’s chief point of critique, which devolved into a kind of mantra during the biennale’s opening weekend: the uncomfortable truth that architects can enact little without snuggling up to corporate largesse. This has coincided, of course, with decades of neoliberalism, and has had the pernicious effect of eroding architecture’s public role. 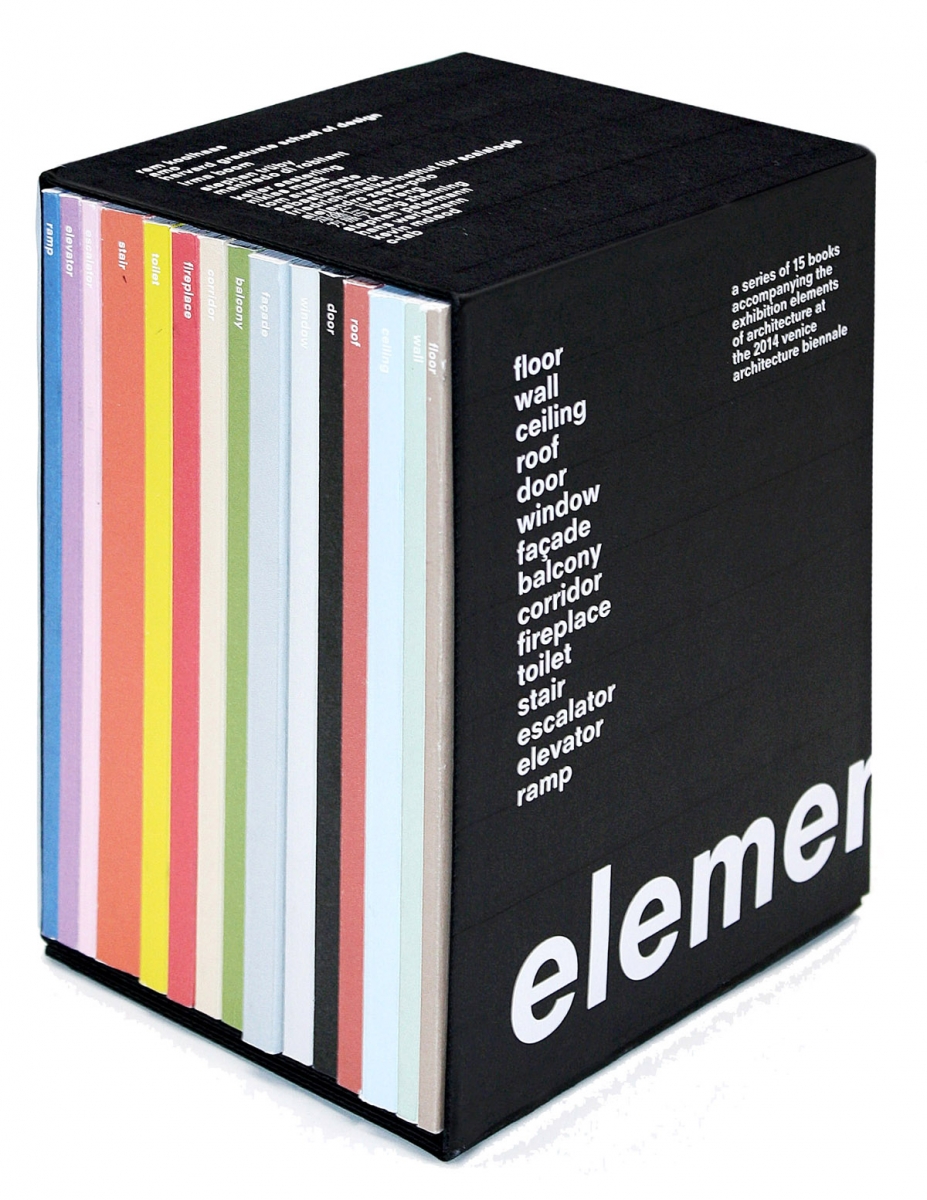 Elements expands on, and fills in the gaps of, the Venice exhibition. Encyclopedic in reach, the book is split up into 15 parts, each one devoted to the history and evolution of a single element.

Unfortunately, Koolhaas fails to unpack the language of his argument. The issue is mostly absent in Elements, at least in the texts attributed to the architect (often a very difficult thing to track due to Irma Boom’s haphazard design). When it does rear its head, it’s treated tepidly with sneering one-liners. The thesis is more precisely taken up by the guest curators and essayists, particularly Keller Easterling in her sophisticated history of the floor (Volume 1). Her essay, loosely translated into a gloomy wedge of gallery space at Venice, teases out the social and politico-economic dimensions of the biennale agenda better than Koolhaas himself does. Once imbued with near-cosmic meaning (as at ancient places of worship), and often affirmed as the “most stable element,” the floor has become a mere machine for generating profit. Floors, Easterling writes, always cover an area, and by assuming that abstract value, they actively condition the financial appreciation of buildings. Taken to the Miesian extent, whereby ordered stacks of fundament are erected midair, sheathed in cases of glass, the floor is reduced to Floor Area Ratio, “the global shorthand for monetizing and negotiating urban space.”

“Facade” (Volume 7) builds off these ruminations, particularly in their relationship to the modern office tower. Developed by Alejandro Zaera-Polo and his students at the Princeton University School of Architecture, the essay and its accompanying installation encompass the full breadth of facade innovations since the Crystal Palace. Zaera-Polo identifies the “post-Fordist” glazed wall as a development away from the rectilinear, perfectly mullioned prisms of Mies, SOM, and Saarinen—all crucibles of Cold War industries. Following the cancellation of Bretton Woods, the monolithic aesthetics of Park Avenue were phased out in favor of a more eclectic expressionism. But the corporate infrastructure remained, only now, as Zaera-Polo notes, obscured under “politically correct” and “politically unconscious” clothes. To put it in Koolhaasian terms, architects met crisis—the wholesale dismantling of Modernism—with gleeful complicity, as best signaled by the highly engineered, surface-thin works of Frank Gehry, Jean Nouvel, and others. Timidity wrapped up in a fireworks display.

The “Window” room at Venice is dominated by a wall of nineteenth-century windows on loan from the collection of Charles Brooking, a lifelong “collector of building parts.”

The other volumes are less blatant with their political pronouncements, and aim, instead, to educate and divert. Towards that end, Koolhaas has compiled a peanut gallery of oddball specialists who all have attempted to elevate their niche subjects to greater significance. The bulk of “Stair” (Volume 12) is devoted to the collected works of Friedrich Mielke, the one-legged nonagenarian founder of the Institute of Scalology (the meticulous study of stairs). Mielke, who has penned 27 books on the subject, believes there is a broad future for his decades-long pet project: “One should establish an entire university dedicated to the studying of stairs in the world.”

One might easily imagine Charles Brooking, whose collection of wood-carved windows (featured in Volume 6) is partially on loan at Venice, would say the same about his own personal obsession. In Volume 11, we learn of Alexander Kira and his untiring fixation with the toilet, what Koolhaas calls the “primordial element.” Over the course of a decade, from the mid-sixties to the seventies, Kira conducted thousands of surveys, mapping out the “empirical ergonomics” of evacuation and coining a minor vocabulary of kooky neologisms along the way, all in the vain effort to overcome the ostensible “inertia” that plagues bathroom design. 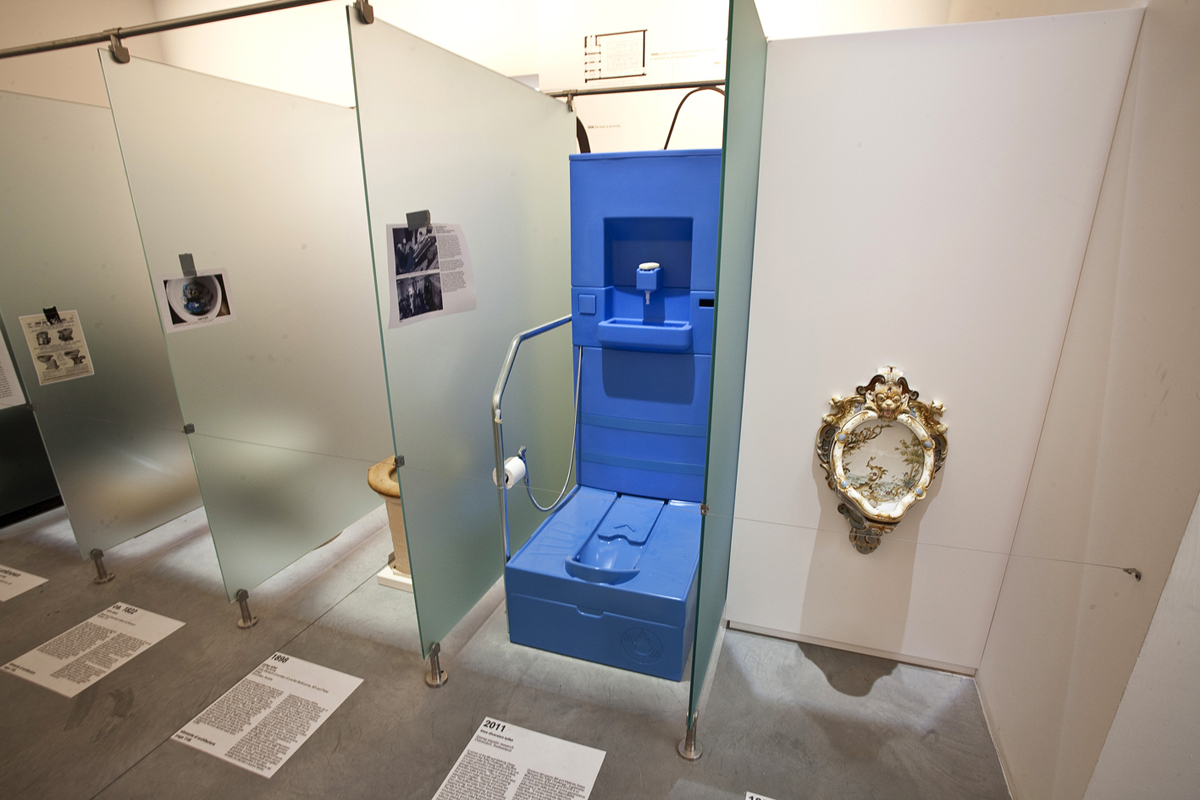 The toilet room, one of the biennale’s most popular displays

All these eccentrics were allowed to indulge their hobbies in reclusive safety. The same cannot fully be said about Chinese architect and scholar Liang Sicheng, whose biography is recounted in “Roof” (Volume 4). After being introduced to Yingzao Fashi, the twelfth-century builder’s handbook to the architecture of the Song Dynasty, Liang traveled the countryside visiting provincial monuments—more than 2,000 in all— taking detailed notes of their unique features to decode the underlying spatial grammar they shared. (This was at least a decade before Pevsner took to English townships for his Buildings of England series.) He eventually completed his annotations for the text in 1963, by which time his architectural theory had fallen out of favor with the party. At the launch of the Cultural Revolution, Liang was “forced to self-criticize” and reject his work, and was submitted to “severe persecution.”

Liang, who was later rehabilitated, is only an aside in Koolhaas’s narrative. Still, Koolhaas clearly longs for the days when architects held principles that extended past profit and fashion; when, backed by the welfare state and local governments, architects actually had a stake in shaping society’s future. Several have criticized Koolhaas for cynical nostalgia, and, surely, he is too damning in his assessment, too eager to speak for all architects, everywhere. And so, the bad taste left after paging through Elements’ encyclopedic compilation of objects. Though they say some things about the history of architecture, Koolhaas’s fetishized building bits don’t yield an applicable synthesis.

But what could be more appropriate to our times? Koolhaas begs us to ask. Unlike Alberti, Semper, or Giedion the ideologue, Koolhaas the catastrophist has not assembled a compositional rule book with which to creatively reconfigure his elements. He denies us both the cathartic and dialectical resolution of things and refuses to point the way out of our morass. As he writes of the escalator (Volume 13), imbuing life into its mechanical innards: “Like this system, [it] churns outwardly with continuous dynamism, but offers the exact same thing everywhere.” What does it say when even the escalator “is haunted in its hidden guts by the suspicion that business as usual can’t go on forever?”