Sottsass’s Affair With India Is Little-Known, but Vital

A new monograph offers a look at lesser-known aspects of the Italian designer’s work. 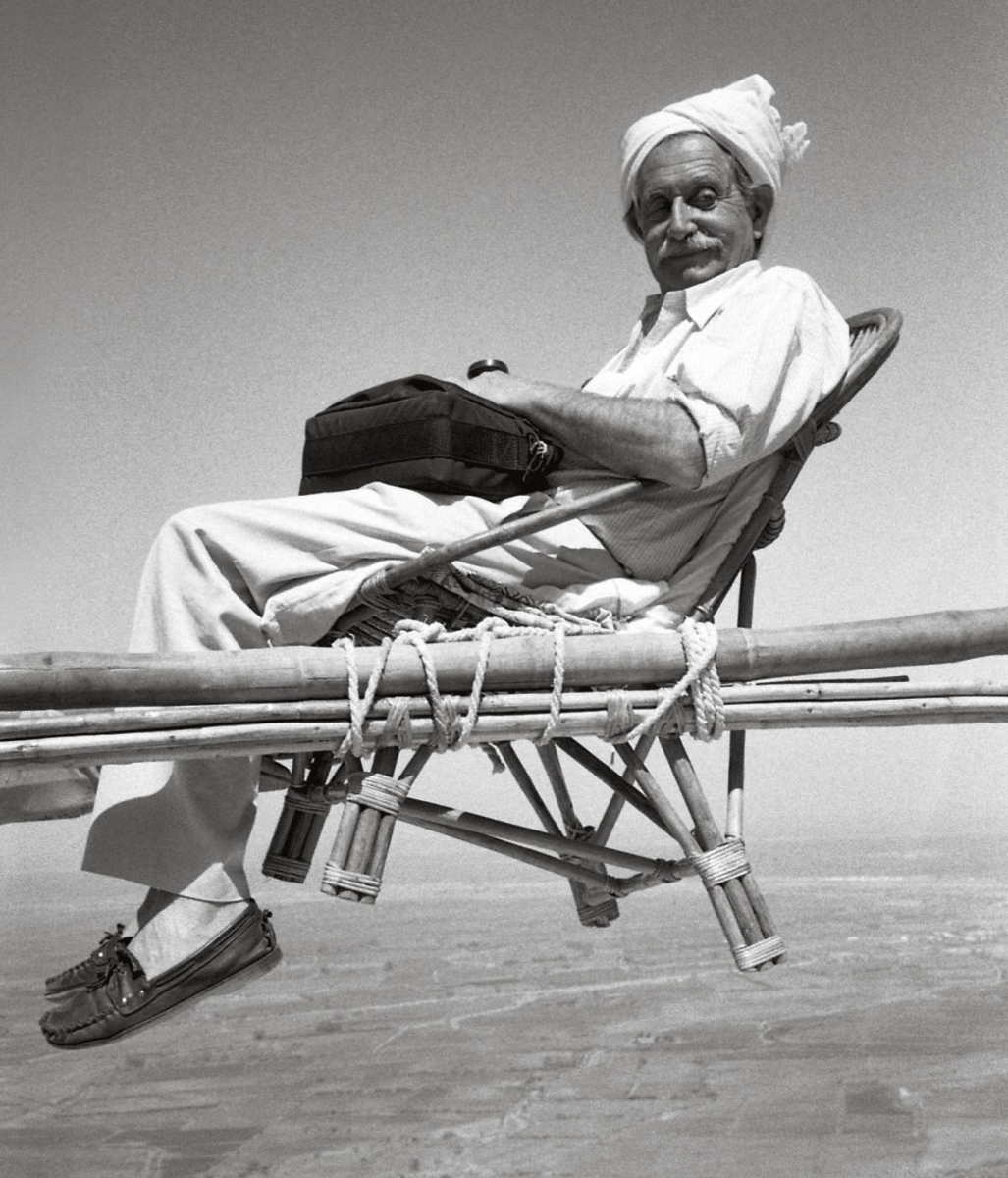 As a student of industrial design history, I knew of only one object in the canon that had an Indian name, and it was designed by Ettore Sottsass Jr. Part of the designer’s groundbreaking first collection for the Memphis Group in 1981, the Ashoka lamp was named after a Buddhist emperor and seems, in its semicircular elements, to echo Buddhist reliquary structures, or stupas. Sottsass combined this backstory with the collaged aesthetic, pop pastels, and exposed lightbulbs that would characterize 1980s interior design. To my biased Indian eyes, it remains a beautiful symbol—of both its complex time and the complicated man who created it.

Few designers have been quite so eclectic in their pursuits, or so incompletely portrayed in their monographs, as Sottsass. Faced with a career that was as much influenced by Sanskrit texts as supercomputers, both the historian Penny Sparke and Sottsass’s partner, Barbara Radice, focused on the big episodes—his brief stint at George Nelson’s office in New York, his association with Olivetti, the birth of Memphis, his return to architecture— leaving it to other, later scholars to expand on the ceramics, interiors, drawings, and photography. Sottsass’s affair with India, punctuated by nearly annual trips and outpourings of creative work, receives spare mention from Sparke and a couple of pages from Radice. But it’s interwoven throughout the length of a new 470-page monograph, written by Philippe Thomé and designed by Julia Hasting. 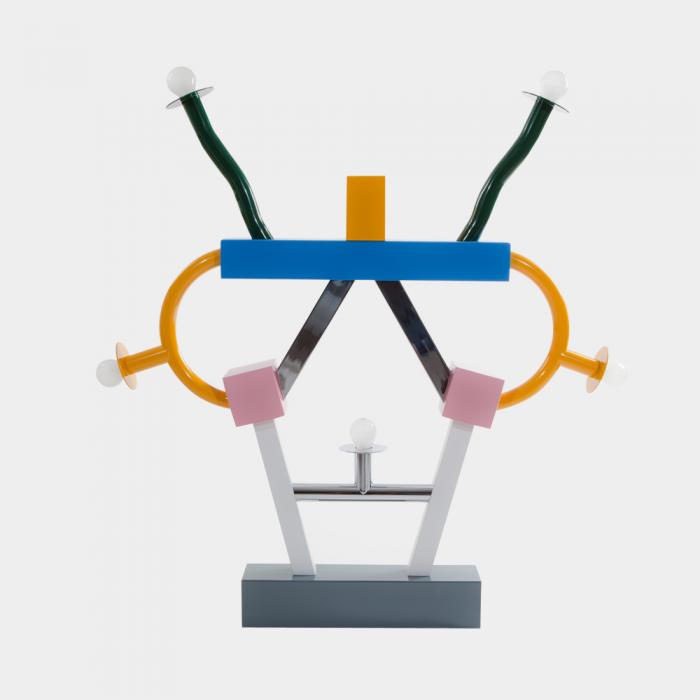 The Ashoka lamp, designed by Memphis in 1981

It’s no small feat of graphic design that allows a reader to easily pull out a single strand from a dense matrix of influences that include neoplasticism, Pop Art, anticonsumerism, archaeology, systems thinking, and much more. Within a bifold blue cover that I associate immediately with the eighties, the book opens each section of Sottsass’s life with a narrative text and a slew of photographs, before exploring his projects in different disciplines by turn. The written parts are printed on thicker, color-coded sheets that act as section dividers, so the fat book seems to naturally fall open to interesting moments—like the biographical text that begins, “In the autumn of 1961, Sottsass and Fernanda [Pivano, his wife] traveled to India for the first time . . .” 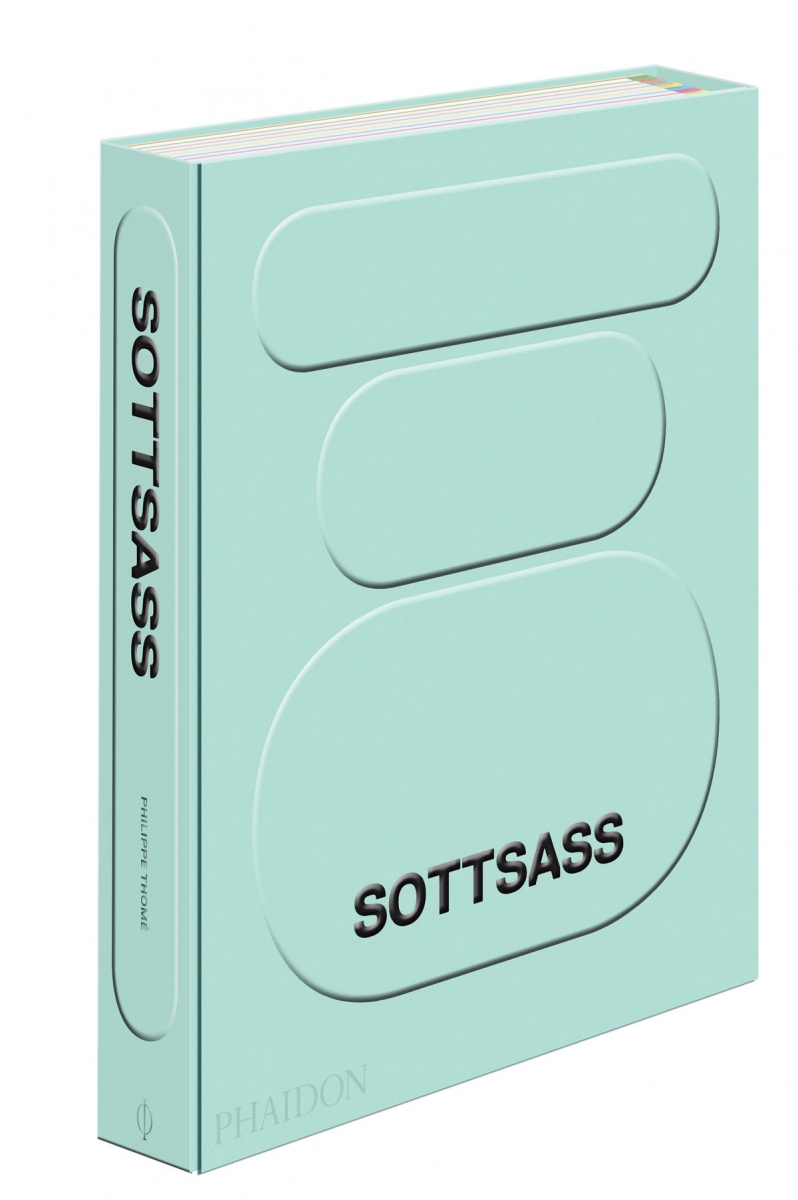 It was three years after the Eameses had visited, and five years before the Beatles were to land in New Delhi. Like the Eameses, Sottsass was there to work: The chemical giant Montedison paid for the trip, to have a trade-fair stand designed. India was, after all, on an aggressive nation-building mission, and sought industrial collaborations from the developed world. The 44-year-old Sottsass brought back typical first impressions—poverty, color, cows, and yogis—and, unfortunately, a form of nephritis considered terminal in Italy. Thanks to Roberto Olivetti, Sottsass made a recovery from this serious ailment at the Stanford Medical Center in Palo Alto, California.

This is one of those points in the narrative where the book design serves Thomé so well. Sottsass’s hospital room in Stanford, East 128, became the title of a publication he began putting together from the room. So the account of the India trip is immediately followed by the section on graphic design—how Sottsass combined collages of American advertisements with editorials on Pop Art for the first few issues of East 128. After his recovery, he traveled to San Francisco and spent time with important beat poets like Allen Ginsberg (a known Indophile who embraced the Hare Krishna movement). Upon returning to Italy, Sottsass and Pivano turned East 128 into an imprint, publishing 19 books between 1963 and 1968. One of the first books, Auguri per sempre, had short essays interspersed with translations of ancient Indian texts. It would seem that, in the end, the effect of that first Indian sojourn upon Sottsass was more Beatles than Eames.

He was to return to different parts of India again and again. (Thomé quotes Radice: “Ettore found India because he needed India . . . He looked for it and found it instinctively, as animals sniff the air and go to water.”) The early works that overtly reference those trips, as well as the drawings and photographs of the time, are very Age of Aquarius. A series of ceramic plates from 1964 is called Offerta a Shiva (Offering to Shiva). Shiva was the Hindu god of destruction and, thanks to a mythological association with ganja, a darling of hippies everywhere. 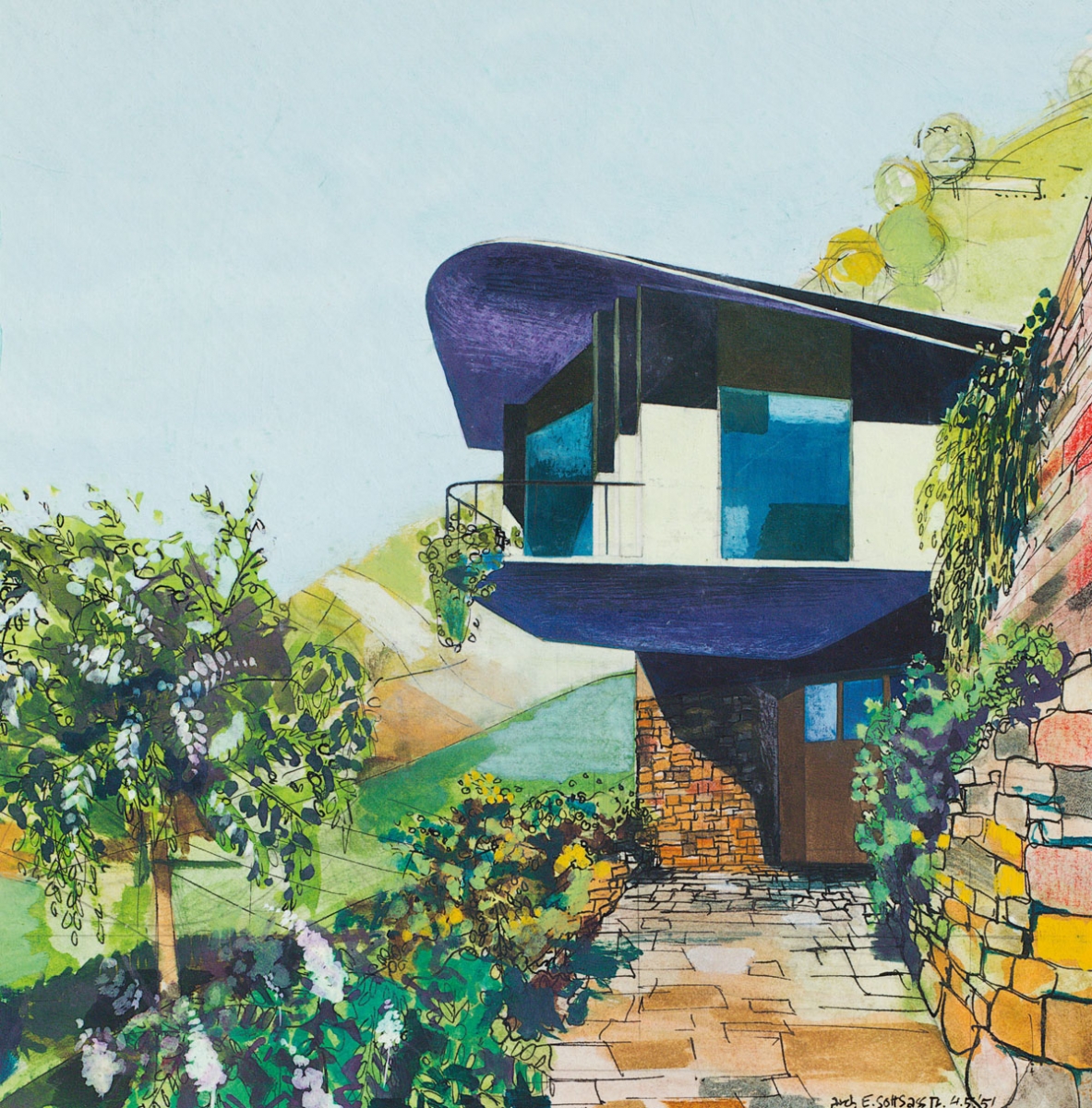 A 1951 sketch by Ettore Sottsass Jr. for the Lora Totino Villa in Turin. In the early 1950s, Sottsass was focused on architecture. He became keenly interested in curved concrete walls— previously reserved for bridges, stadiums, or warehouses—as a way of freeing his work from the heritage of rationalism.

At this point, it seems as though two parallel trajectories of work opened up for Sottsass. On the one hand, the man who was famous as the designer of Italy’s first supercomputer went on to design the Valentine typewriter in 1969 and win his second Compasso d’Oro in 1970 for a mechanical calculator called Summa 19. On the other hand, the same years saw two collections of ceramics named after Tantra—an esoteric form of Hinduism that is perceived as being erotic—and Yantra, the diagrams more commonly known as mandalas. It would be a mistake to think of the former strain as externally focused and the latter as an expression of internal mysticism. Sottsass’s machines, systems of spatial organization, and office furniture were becoming increasingly humanized and concerned with social issues. His evocation of traditional symbols rings more and more hollow. The Yantra di Terracotta range appropriated geometric diagrams believed by devout Hindus to hold spiritual energy, sliced them, and extruded them in ceramics to form vases for distribution in interior design shops.

Ancient civilizations and Pop Art were huge influences on Sottsass’s work. In 1967, he melded the two for Menhir, Ziggurat, Stupas, Hydrants & Gas Pumps (above), an exhibition of oversize ceramic totems.

The two strains of work don’t really seem to coalesce until the Ashoka lamp, which is conspicuous by its absence in Thomé’s book. Memphis was, Thomé reminds us, anti-ideological. Its purpose was to catalog styles, colors, decorations, and stylistic tendencies, to explore a world of ideas “with a light tread . . . to represent or not represent things or persons, be they elite or derelict, traditions [sic] or boorish.” So it may or may not be a contradiction that the lamp is named for India’s foremost champion of an antimaterialist religion and is inspired by that religion’s holiest sites, while simultaneously designed to be an object for consumption by modern Europeans and Americans. (You know, postmodernism at its best.) 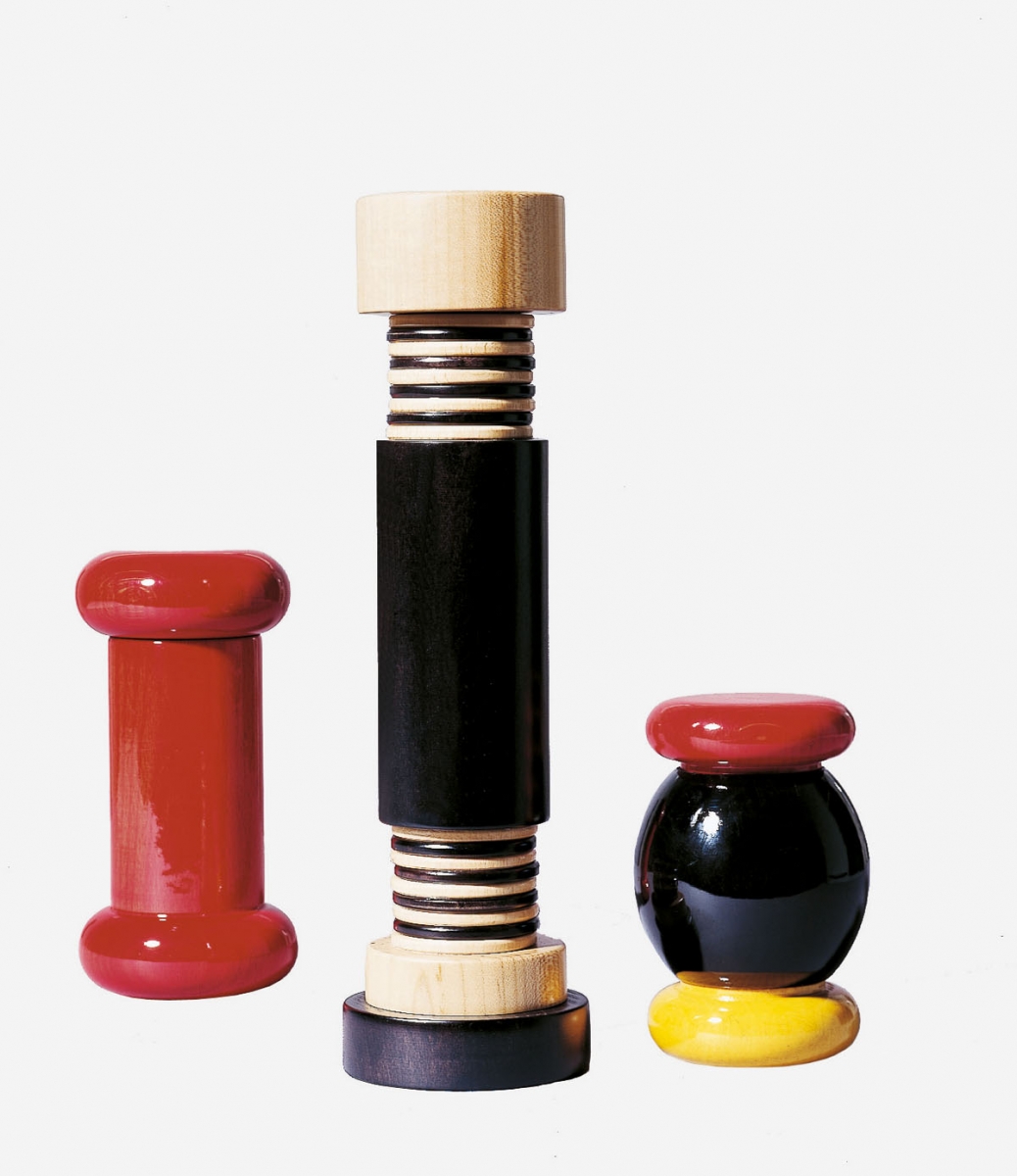 Sottsass designed these pepper mills for Alessi in 1989, a year after he presented an exhibition of products crafted in India that also used turned wood and colored lacquers.

Even as he gradually stepped away from Memphis and turned to architecture in the following years, Sottsass kept his relationship to India alive. In 1984, he participated in an exhibition that brought Indian craft traditions and international designers together to create a collection of one-off products. This encounter led him to initiate his own collaboration with Indian craftspeople, resulting in a 1988 exhibition of furniture called Bharata (which translates, quite simply, as “India”), and inspiring a series of turned-wood objects for Twergi, a subsidiary brand of Alessi. In the book, these later decades are sprinkled with many charming photographs from India—of Sottsass and Radice with a python around her neck, Sottsass with South Indian craftspeople, Sottsass seated on a string cot among a bevy of children.

These personal photographs make it easier to forgive the great designer his lapses into cultural appropriation. (Such a judgment would be anachronistic, anyway.) Radice’s 1993 biography painted Sottsass as contrarian and antisocial, yet Thomé’s book shows how Sottsass formed deep friendships with a remarkable number of great, creative people in his life. Upon reading this new monograph, a great number of not-so-famous people will also be left wishing they had known him, among them a certain Indian student of design history.