Max Zahniser doesn’t usually make house calls. As a leader in sustainability and integrative, systems thinking he lends his expertise to wide ranging building projects and organizations. He promotes green practices on a national level and has been at the inception of advanced thinking in that arena. Zahniser doesn’t just paint with a broad brush. Son of two psychologists, he knows more than most that “relationships matter.” When it comes to collaborations, he wisely encourages “enlightened self-interest rather than right or wrong.” To give you a better idea of his philosophy Zahniser will tell you that systems thinking is his foundation for understanding the world. He rejects a fragmented, specialized worldview and ascribes to the dawning “Age of Integration,” anticipated decades ago by Buckminster Fuller and Lewis Mumford. In contrast to healthy interdependence, Zahniser sees Philadelphia as an example of “dispersed environmental initiatives.” His new Sustainability Nexus enterprise aims to pull that all together.

I asked Zahniser to pack up the best of his design insights and conceptual diagrams into a tool kit he could take to any neighborhood to foster grass roots green initiatives, so to speak. As with the famed “Powers of Ten” illumination of scale by Charles and Ray Eames, presumably, what can heal a neighborhood, can heal a city and so on.

“This diagram (above) is used to demonstrate that, at some level, the understanding of interdependent systems is innate because every culture in history has had a version of these elements. When we ‘remind’ people of them, they immediately unlock the ability to identify a pretty holistic set of impacts and even system dynamics.”   — Max Zahniser 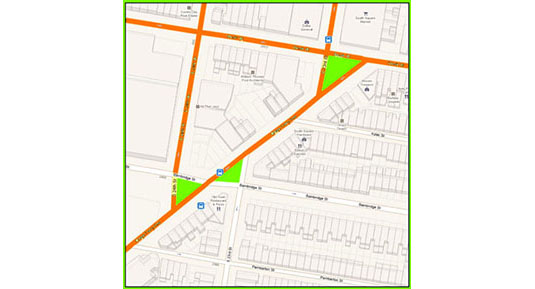 Triangles at Grays Ferry is an organization that Zahniser sees as a potential “patient” (or client). They are pushing for the greening and enhanced safety of 3 small, bleak traffic islands in their neighborhood.  I met up with Andrew Dalzell, program coordinator for SOSNA (South of South St. Neighborhood Association) heading the Triangles project, for coffee at the tiny Ants Pants Cafe near the Triangles site. Dalzell is a sharp, energetic guy who built upon his background in European history and a stint working for the City Planning Commission on zoning reform, attaining a salaried position as a neighborhood advocate.

My plan was to bring Zahniser and Dalzell to the table to see how they might initiate progress at ground level. Previous efforts at the Triangles had fallen short of the city-required unanimous neighborhood support and, thus, grant funding for implementation. From his laptop Zahniser quickly reveals how his concepts are eminently scalable. “They’re vector,” he says. The diagrams, with their streamlined, fundamental approach to collaboration, analysis and implementation, can easily tune from mega building complexes to humble traffic triangles. Zahniser already sees the Triangles as the locus to capture and reuse everything from storm water to solar energy, contributing directly to city services. Essentially, they become nodes to purify water and generate energy, propagating a new, healing network for the city. Amiable and approachable, Zahniser projects ahead to the not-so-distant future when there are crises of available resources and climate induced calamities. He has adjusted his thinking to focus on life supporting, “regenerative” systems – even little bits of leftover space are now to be marshaled for service and comfort. Such a fine-grained approach, I believe, allows us to truly appreciate and gain a handle on the enormity of the environmental tasks we face. Incidentally, though Zahniser is passionately consumed with sustainability, he is not entirely sanguine that the public and governmental will to succeed is guaranteed. Indeed, that may be what drives him forward – bringing both himself and Dalzell up against opposition to change. “It will take education,” asserts Zahniser. Dalzell adds enthusiastically, “If we can show you that you don’t have to be content with the status quo, that would be a powerful demonstration!” Professor Zahniser is about to engage Dalzell and the Triangles at Grays Ferry group as a case study for his built-environment design course at Drexel University, a cross-disciplinary application of his sustainability principles. He will guide 5 student teams to study the “5 key subsystems” applied to the Grays Ferry neighborhood. All teams will then contribute to 3 outcome categories. 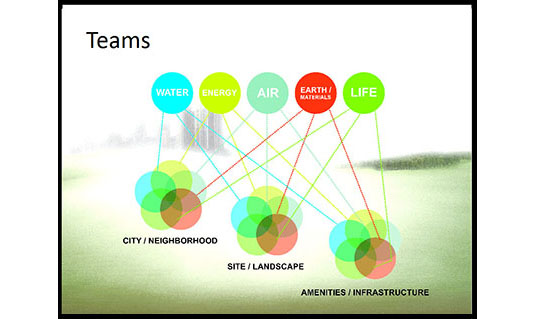 The real challenge facing Zahniser’s students, however, is not just visionary design. It’s about “buy in,” motivating people with the right incentives to achieve consensus. Reconciling system dynamics with human dynamics is at the heart of any breakthroughs. His students will need to learn, early on, how to walk that line, not putting it off until later when they may have lost the audience they needed to reach. At the very least, to become good, responsive designers they will have to become acute listeners. At another time I will bring you into the classroom as the students begin to assimilate knowledge from their contact with and study of the Grays Ferry community. Lofty ideas will be put to the test, critiqued by the very people who would live with the resulting designs. 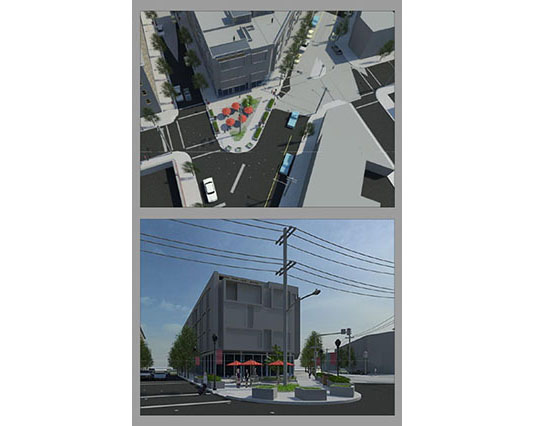 Below: North triangle – Past, present & future 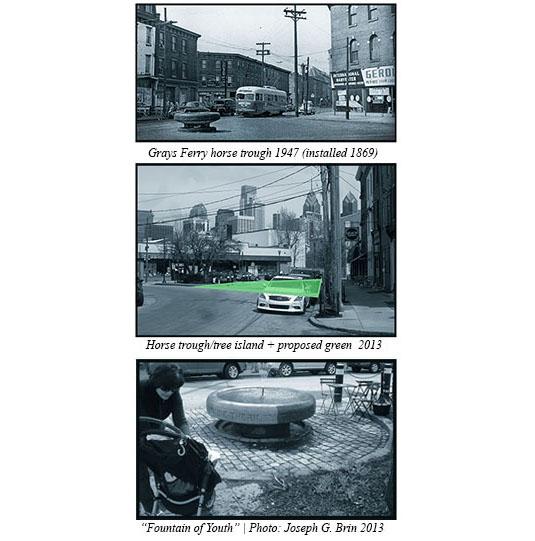 JUST WHAT THE DOCTOR ORDERED

SOSNA literature describes the hidden potential of the traffic triangles they are championing as “one small link in a chain of public spaces,” ripe for improvement. The effort the Triangles represent promotes healing for this or any other city with a combination of resourcefulness, teamwork and, hopefully, money. The care invested in this postage stamp sized real estate will ripple outwards setting new standards for larger scale usability, sustainability, and safety. A stronger, green connection can then blossom between disparate urban neighborhoods. When it comes to traffic, no island is an island.