Taipei’s designation as this year’s World Design Capital—chosen by the International Council of Societies of Industrial Design—is a recognition of the city’s pioneering, design-led urban strategies. 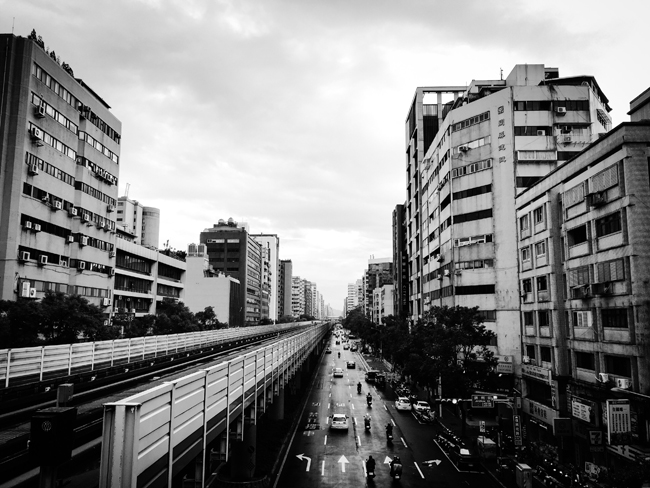 At the October 13 opening of the International Design House Exhibition in Taipei, one of the signature events of the city’s year as World Design Capital, Mayor Ko Wen-je talked about showing the world the strength of Taiwanese design: “I often say that if we want to change Taiwan, we want to start by changing the capital, and that is Taipei. If we want to change Taipei, then we have to start by changing our culture, and changing culture starts with design,” he said. “Through design, we hope that we can make Taipei a prettier and more convenient city. This year, this design exhibition, is only the beginning.”

Under the theme “Adaptive City: Design in Motion,” Taipei is demonstrating why cities must be able to adapt to citizens’ demands and raise their standard of living through design thinking. An active design community—from the IT industry as well as graphic and product designers to architects, engineers, and community-based urban regeneration projects—contributed to the cause. To date, the city has held more than 645 interdisciplinary design workshops and project-office brainstorming sessions, with the participation of more than 800 professionals from different fields. Forty-five bottom-up “Stir Design” projects and 26 top-down “Public Policy by Design” projects have been initiated, broadening the role of design in public affairs and achieving genuine urban innovation through the involvement of designers. Many of these collaborations will continue beyond 2016.

These design initiatives are not supported at just the municipal level. Even Taiwan’s president, Tsai Ing-wen, weighed in on the importance of design, not only for cities but for nations. She sees design as an important tool to address social issues—with local and central governments working together. “We can use design to solve a lot of the problems that we have, such as aging population, environmental protection, and also to alleviate poverty and to help people to improve their quality of life,” she says. “Strength in design symbolizes our national strength. We will keep working and do our best to use the power of the government to support this industry, so that we can really build up the design strength of Taiwan.” 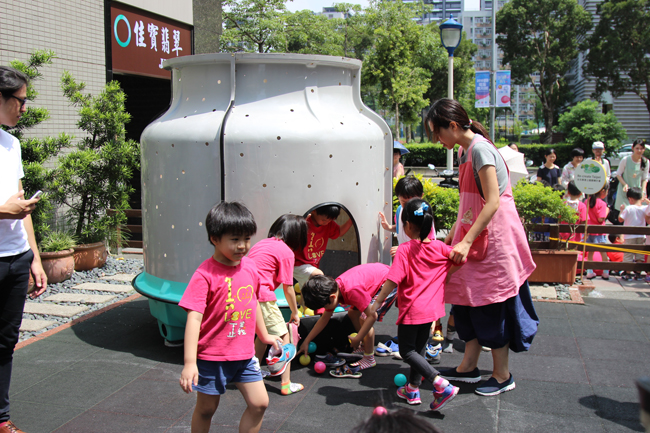 The city is working with designers from outside Taiwan, through guest residencies or other formats for collaboration. The Spanish collective Basurama, for example, created two popular playgrounds—Kids Ambition Park (pictured) and Swings Park—which were built using municipal waste. 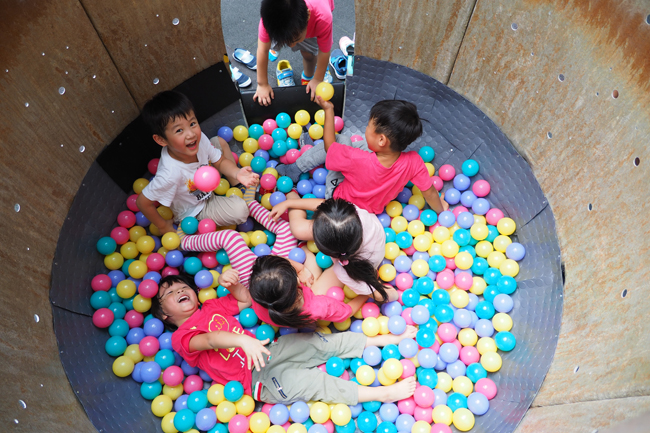 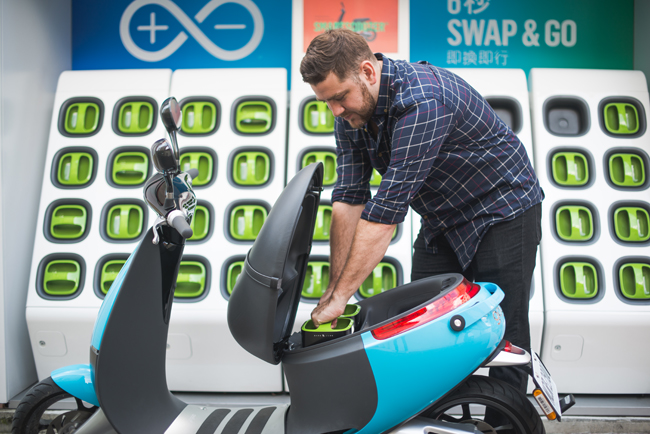 In a city with an ingrained motor-scooter culture, Hong Kong-born Horace Luke and American Matt Taylor established Gogoro, a company focused on integrating the latest technological innovations with energy management and smart mobility and connectivity. By August 2016, the company had sold more than 10,000 smart scooters.

Walk down any street in Taipei and you’ll see an abundance of traditional markets made up of tiny, family-run businesses—most of which have store- front signs that were created as an afterthought. In 2013, the Taipei design company Archicake set out to change that through a collaborative process. The company partnered with some of Taipei’s leading designers, including Feng Yu, Aaron Nieh, and Wei-Da Lin, to create contemporary signs for Dazhi Market in the city’s Zhongshan District.

Signboards included playful illustrations of fish, chickens, and seafood, helping transform the market and, in some cases, even offering an element of whimsy. Illustrator Wei-Da Lin saw the project as a chance to communicate directly with stall owners: “Communication builds real human connections, which is just like how this market was first created,” she says. This past May the Small Shop Signboard Manufacturer project celebrated its 100th sign. 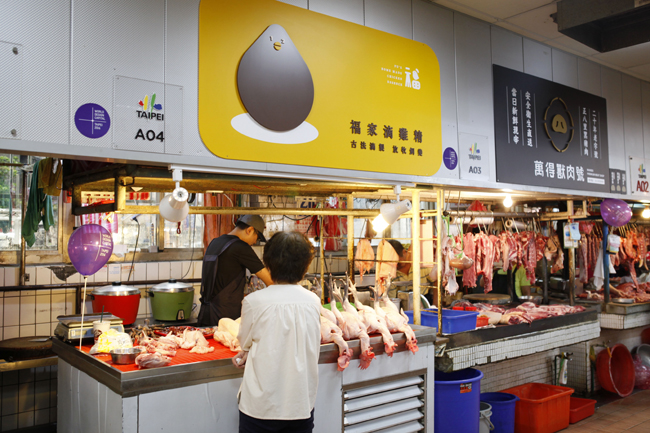 The Signboard project set out to represent the distinct character of each stall, with both designers and shop owners experimenting with different materials, taking into consideration the needs of the shop as well as the overall appearance of the city streets. 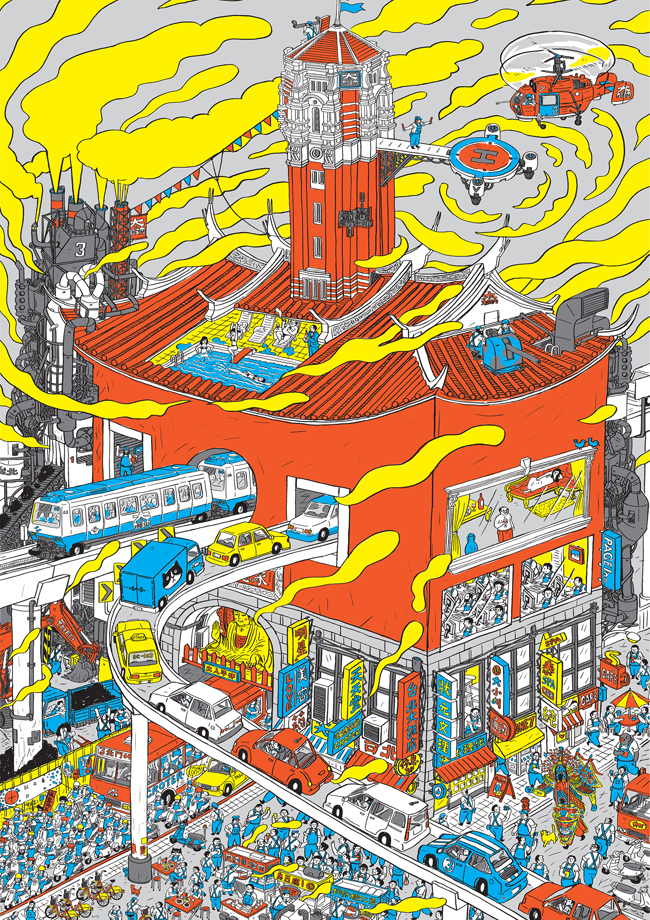 Over the past two decades, architecture in Taipei has been preoccupied with building tall. In fact, Taipei 101, with 101 floors, is one of the tallest buildings in the world. That is set to change with the opening of a new centerpiece for the city’s architecture, the much-lauded Rem Koolhaas and David Gianotten–designed Taipei Performing Arts Center in the Shilin district—located adjacent to the Jiantan MRT station and a stone’s throw from the city’s famous night market. The center consists of a 1,500-seat Grand Theatre, an 800-seat Multiform Theatre with a flexible space to accommodate the most experimental performances, and the standout feature visible on the exterior of the structure, an 800-seat Proscenium Playhouse with a spherical auditorium, resembling a spaceship docking with the transparent central cube. Each theater can function independently while sharing backstage space and mechanical facilities. However, the Grand Theatre and Multiform Theatre can also be combined into a Super Theatre with a 328-foot-long space with experimental theatrical possibilities. “This arrangement allows the stages to be coupled for unsuspected scenarios and uses,” Koolhaas said at the topping-out ceremony. “The design offers the advantages of specificity with the freedoms of the undefined.” And while infrastructure or backstage spaces are generally hidden from the public, Koolhaas’s firm OMA has designed a “Public Loop” so that audiences can experience the entire process of theater production—allowing the center to engage a broader public.

In August 2016, the scaffolding obscuring the Taipei Performing Arts Center started to come down, revealing the aluminum exteriors of the Proscenium Playhouse and Multiform Theatre. The center is scheduled to open in June 2017. 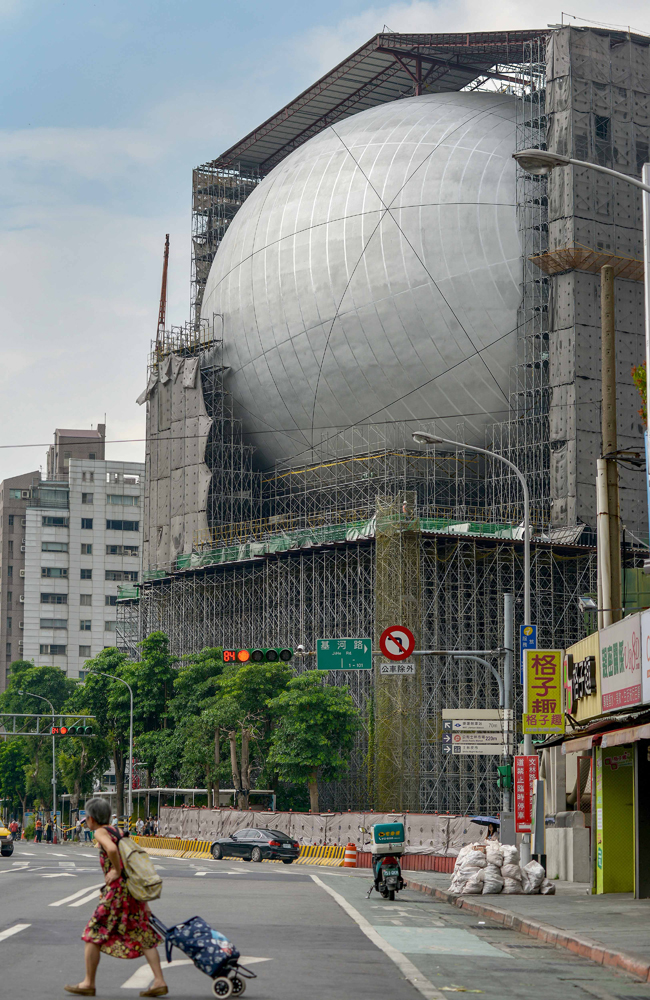 This past August, the giant orb of OMA’s Taipei Performing Arts Center began to emerge from scaffolding. The center, which opens next year, heralds a new phase in Taipei’s architecture. 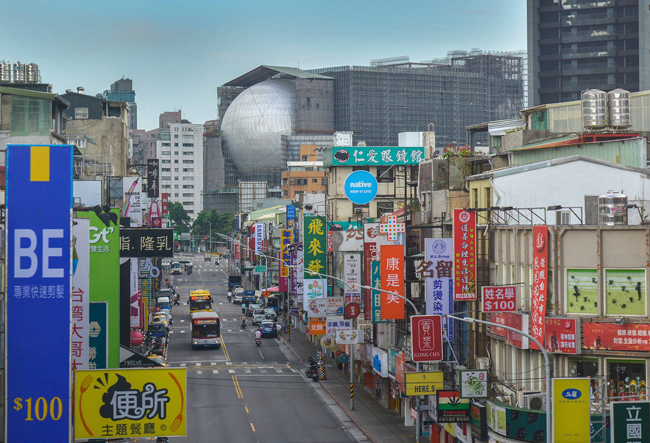 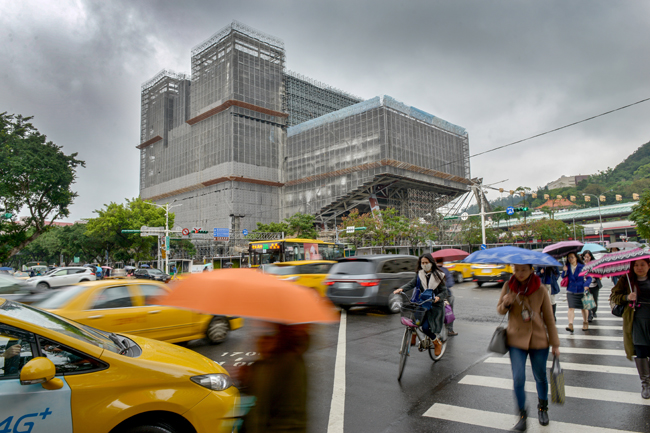 Miniwiz: Creating Resources of the Future

Founded in 2005 by architect/structural-engineer duo Arthur Huang and Jarvis Liu, Miniwiz designs everything—from the smallest handheld devices to buildings—with the ideas of sustainability, recycling, and the environment in mind. The company aims at transforming post-consumer waste into high-performance materials in a true closed loop.

Its EcoARK Pavilion, located in the Taipei Expo Park in Taipei, is a fully functional public structure made of Miniwiz’s inexpensive and lightweight Polli-Brick—a translucent, naturally insulating, durable building material made entirely of recycled PET from soda bottles. It took 1.5 million recycled plastic bottles to build the naturally ventilated nine-story public exhibition space. Embedded solar power systems store energy during the day to run the building’s LED lights at night. The wall system weighs 50 percent less than that of a conventional building, is strong enough to withstand storms or fires without the use of any chemical adhesives, and comes at about one-fifth the price.

The firm continues to produce innovative green solutions, including a series of NikeLab stores around the world that feature recycled materials such as Ricefold, a polymer reinforced with rice nanosilica, and Nike Grind, a composite material made from discarded footwear and apparel. 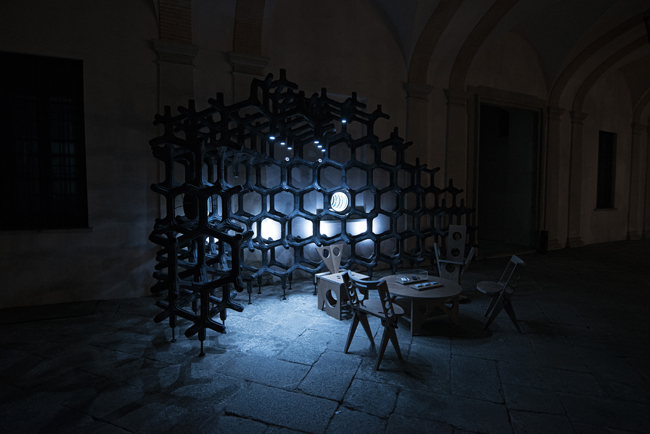 The Anything Butts installation in Milan—an installation made of recycled cigarette filters and air-purifying bamboo charcoal. 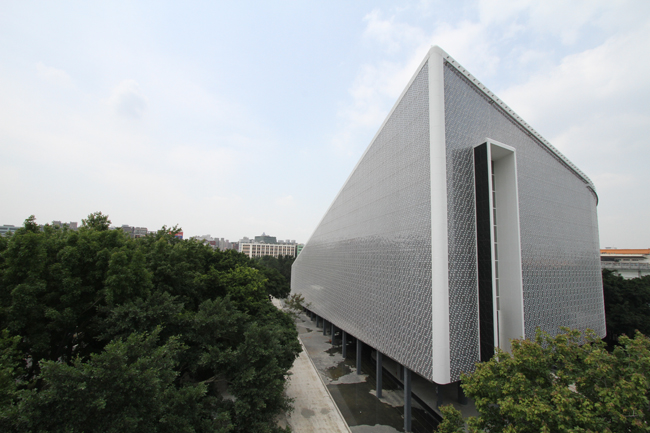 The EcoARK Pavilion in the Taipei Expo Park, made with Polli-Bricks. 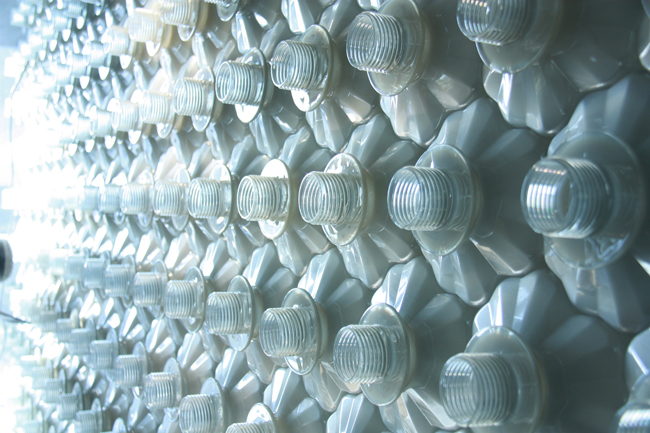 In response to devastating floods in Pakistan in 2010, Buddhist nun Cheng Yen, of Jing Si Publications, spent three years researching and developing an easy-to-store and transportable foldable bed that could keep victims of poverty and natural disasters from sleeping on the ground. The result is a 30-pound unit that can be folded into multiple forms: a bed, a double-sided bench, a recliner, and a triple storage bin. Made from polypropylene, the waterproof design needs only ten seconds to completely spread out into a bed that can support up to 330 pounds. When fully collapsed, it becomes portable and easy to store. The project was a finalist for the social design category of the 2015 Golden Pin Design Award, which celebrates innovative products and projects expressly created for the Chinese-speaking market. 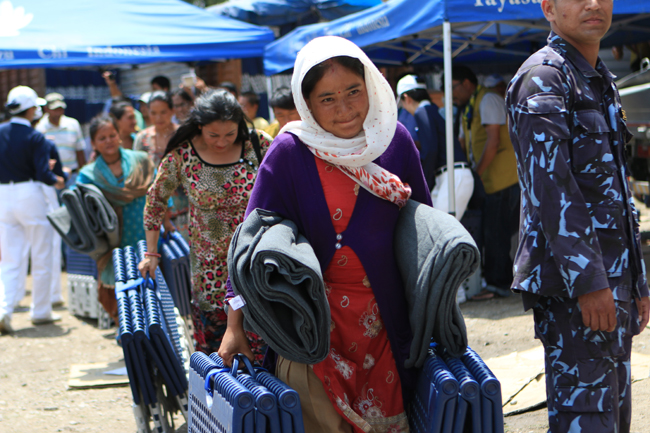 The Multipurpose Folding Bed. To date, thousands of units have been distributed around the world as part of humanitarian and disaster relief efforts. 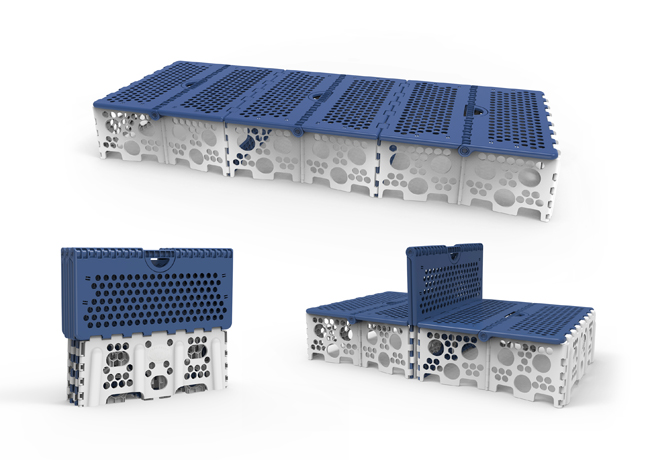