The Underdome Guide interrogates architecture’s role in the business, politics, and ideology of energy management. 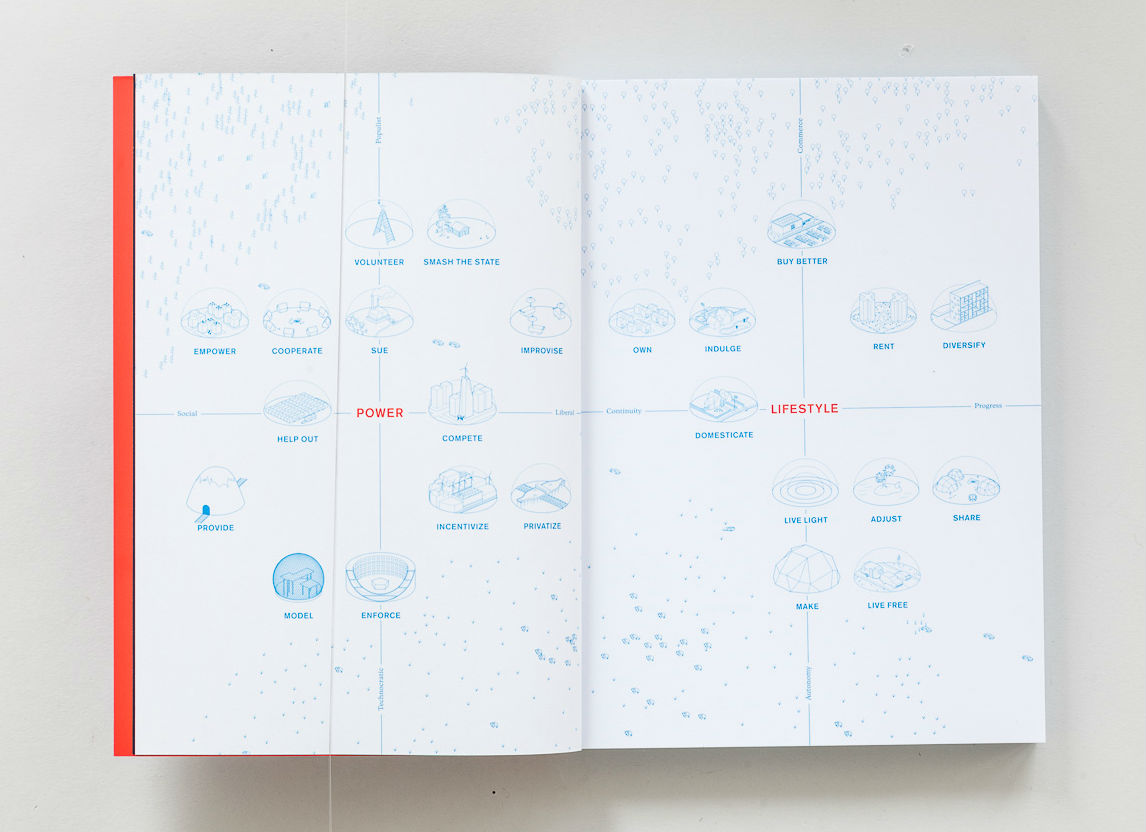 The 48 case studies in Carver and Kim’s book are organized into four chapters. These opening spreads represent the key strategy of each case study on a matrix, characterizing its approach and positioning its ideological framework.

The problem with sustainability, architect–academics Erik Carver and Janette Kim write in their new book, The Underdome Guide to Energy Reform (Princeton Architectural Press, 2015), is that it “defers to the invisible hand of the market and keeps its hands off Mother Nature.” But dealing with climate change requires a much more hands-on approach. Carver and Kim explain how architecture is central to these concerns, unpack the real meaning of resiliency, and find pragmatism in utopia.

Janette Kim: Many of the significant structural changes that one can imagine for energy reform, especially from an ideological perspective, take place through protocols or design decisions that operate on a very accessible level. The Dome Over Manhattan [a 1960 proposal by Buckminster Fuller and Shoji Sadao to regulate the climate of the city] is a good example of that. As utopian as it was, and as much as it dared to imagine an entirely new structure of ownership and collective benefits, it was also steeped in the logic of technical management. The crucial calculation of that project was that because of the surface area of the city, the dome structure could be paid for with money that would otherwise be used for snow cleanup. The designers attempted to manipulate efficiencies—calculated as data and costs, real findings—to imagine utopian urban arrangements.

A lot of case studies that we look at in the book are interesting because they think creatively about the metrics or performance criteria of design—things like housing availability, for example, or the difference between the growth of energy savings on one hand and the distribution of energy savings among a population or the public on the other hand.

Erik Carver: What often gets left out in these kinds of projects and utopian schemes, though, is politics. If you have a utopia, [the assumption is] you have a perfect world without politics, or history doesn’t come to bear. That’s why while formulating this book, we were thinking not just about Fuller’s dome, but also about the Thunderdome from the Mad Max series. That’s very different, but it does have this contestation at a basic level. We contextualized our book through these ideas, juxtaposing these different kinds of domes.

Laying out the Strategies

EC: The book is structured around four chapters—power, territory, lifestyle, and risk—that articulate different techniques and protocols for designing energy reform. They clinically weigh out possibilities that are mutually inconsistent with each other. Some of these approaches could be described as revolutionary; others are conservative. The word “reform” is flexible enough to encompass all these possibilities.

Our project was initiated around the time of the stimulus bill. This context made us aware of the political framework in which architects work on a daily basis. We thought, “If we were to write our own bill, how would we change the rules?”

JK: We were interested in moving beyond the idea that there was one tidy solution to energy reform. We first thought about the difference between hippies and hipsters, two very different age-groups with a different set of politics and consumerist behaviors toward environmentalism. From those demographics, we populated a wider range of interests and ideologies that enabled us to map out a set of agendas around energy. That’s where the visual guide comes in. We looked at 48 case studies to see how infrastructure, building systems, and construction worked in the service of these arguments.

For the subsequent stage of the project, we wanted to test our ideas about energy and see how they played out in a number of disciplines and different forms of practice. We hosted a symposium—included in the book as a set of transcripts—with people from economics, history, policy, and other arenas to see whether the agendas we had begun identifying had currency in their fields. The next phase was to analyze how those agendas and arguments interface with architecture and become embedded within architectural devices. 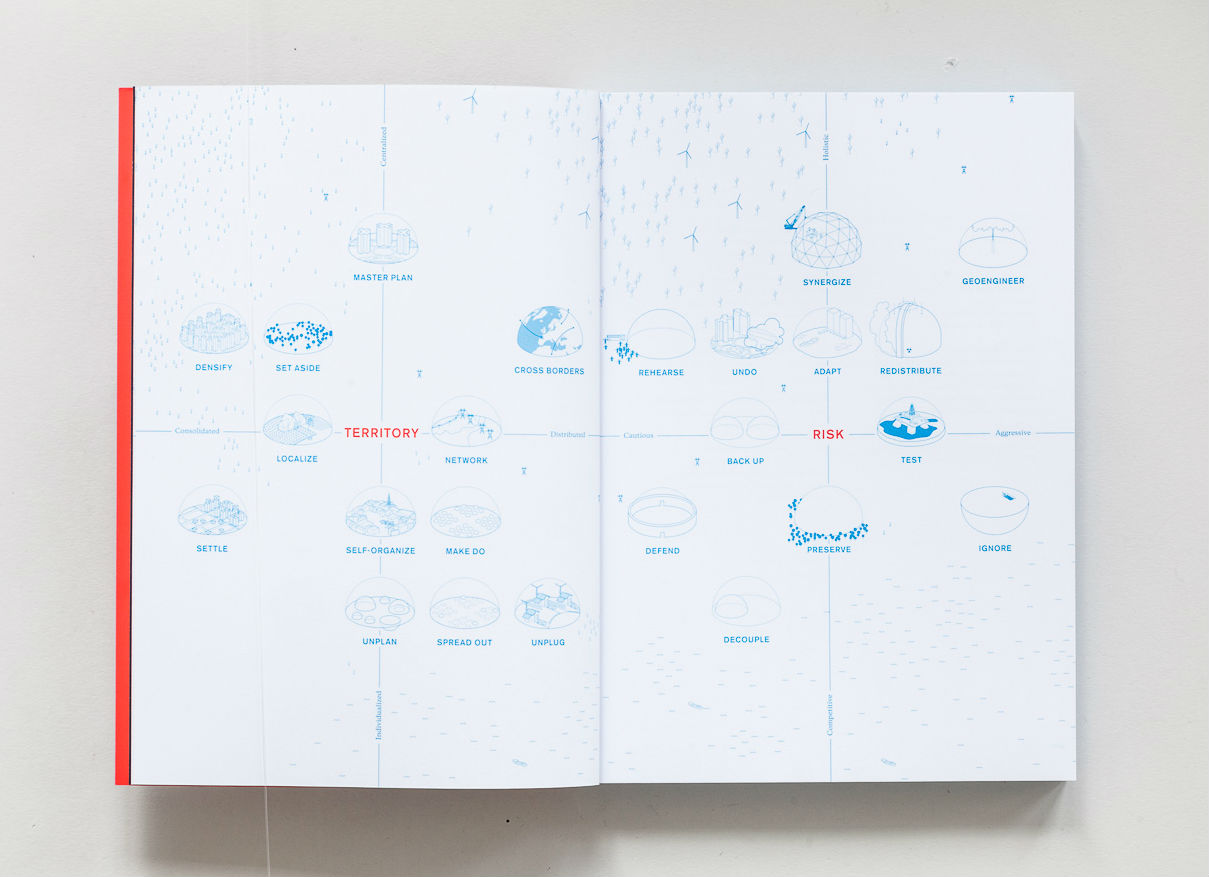 The four groups of case studies are bookended by essays, as well as transcripts of a symposium, that raise critical questions about the enterprise of energy reform. in the essay at the start of the chapter on risk, Michael Osman warns: “There will never be such a thing as a planetary thermostat that guides humans toward the best possible global temperature.”

EC: In discussions about sustainable design today, we hear a lot of claims promising efficiency and energy-saving strategies. There is the implicit hope that these can create change at [sufficient] scale to combat global warming and other ecological problems. While we agree that this kind of large-scale agency is possible, we wanted to examine the politics behind enacting environmental changes.

JK: The question is “What is the agency of architecture in the politicized domains of energy reform?” Structural changes, large and small, can be realized through design, but that requires architects to be aware of the political implications of their work. There are two examples that really illustrate design’s inherent political nature. The first is the Federal Weatherization Assistance Program, which uses U.S. Department of Energy funding to renovate low-income housing, regardless of the building type or who owns it. If you look at the agency’s activities, they are incredibly tiny interventions ranging from upgrading boiler rooms to replacing faulty insulation with spray foam—what’s important is that those small actions are part of a structural form of federal funding for public housing. Then you have public-private initiatives such as Energy Hog, a public media campaign commissioned by the Alliance to Save Energy that promotes personal responsibility as a way of saving energy. The idea is that because one depends on a market-based system, energy efficiency is a matter of voluntary consumption.

JK: Reform often starts with municipal, state, and federal governments, which must balance private, for-profit interest and the preservation of natural and civic resources. You see how government can be innovative in working out this balance and instigating change through policy. In 2009, the New York City Council passed the Greener, Greater Buildings Plan, which aimed at retrofitting significant properties such as the Empire State Building with building system upgrades and energy-code restrictions.

That said, there is also an incredibly wide, diverse set of ways that corporations and utility companies weigh in alongside government agencies. These often take the form of public-private partnership, like the Transbay Transit Center and District in San Francisco. It was established after the demolition of an urban freeway; the city rezoned the property and set up a competition between developer-architect teams to design a set of high-rise towers with a sizable percentage of affordable housing baked into the project, grouped around a transit hub.

Finally, there are cases within the corporate world where designers are able to step into certain moments along the supply chain. You see this quite easily with products like Nest that feature an interface of consumption that has been imagined by designers. Less observable but still conceivable are the ways in which designers can insert themselves in the management of global transactions, such as in the transportation of garbage across borders. A waste-energy facility in Oslo is actually trying to acquire trash from the United States to repurpose as an energy source to heat the Norwegian capital. Architects have learned to strike up novel collaborations between all these stakeholders. 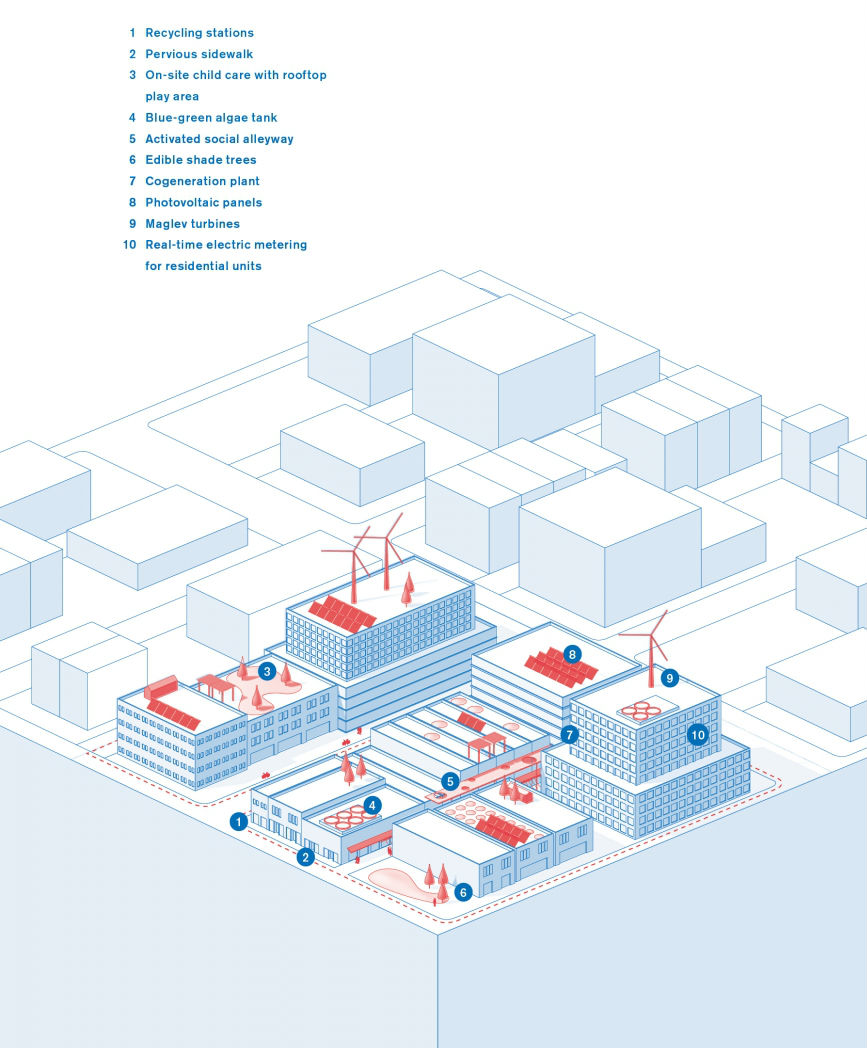 One of the strategies described in the section on power is the self-run collective. The nonprofit Living City Block, in Denver, Colorado, and New York City, pools the resources of a city block to make investments in amenities like recycling stations and cogeneration plants that single owners might not be able to afford.

JK: By making an encyclopedia of tools of energy, we want to help architects understand the implications of their own choices. We also want to familiarize them with different techniques available to the building industry that can be used in ways that are contrary to their original purpose. As these tools are combined, re-sorted, and remixed, their meaning is constantly changing. No one approach is more right than the other, but the differences between them are instructive. In that sense we meant to make a guidebook that prompts action but which isn’t prohibitive or prescriptive.

If you ask people what they think about energy reform, the discussion quickly turns to issues of consumer choice—i.e., what products to buy or how high to keep the thermostat. There’s an assumption that the only agency that the individual has is as a consumer; that positioning strips individuals of any kind of political power or instrumentality.

At the same time, we also think that lifestyle is an extremely important and powerful site for change. By “lifestyle,” we mean the reimagining of economic relationships, our work–leisure balance, and our experiences of pleasure or comfort. We look at Airbnb, for example, and the way users can sublet their personal living space as a way of creating short-term economic relationships with guests. A more permanent version of this is enabled by policies like accessory dwelling unit (ADU) zoning laws, which allow homeowners to erect secondary living units or “granny flats” and rent them out. The overall effect in this scheme is an uptick in the supply of affordable housing. 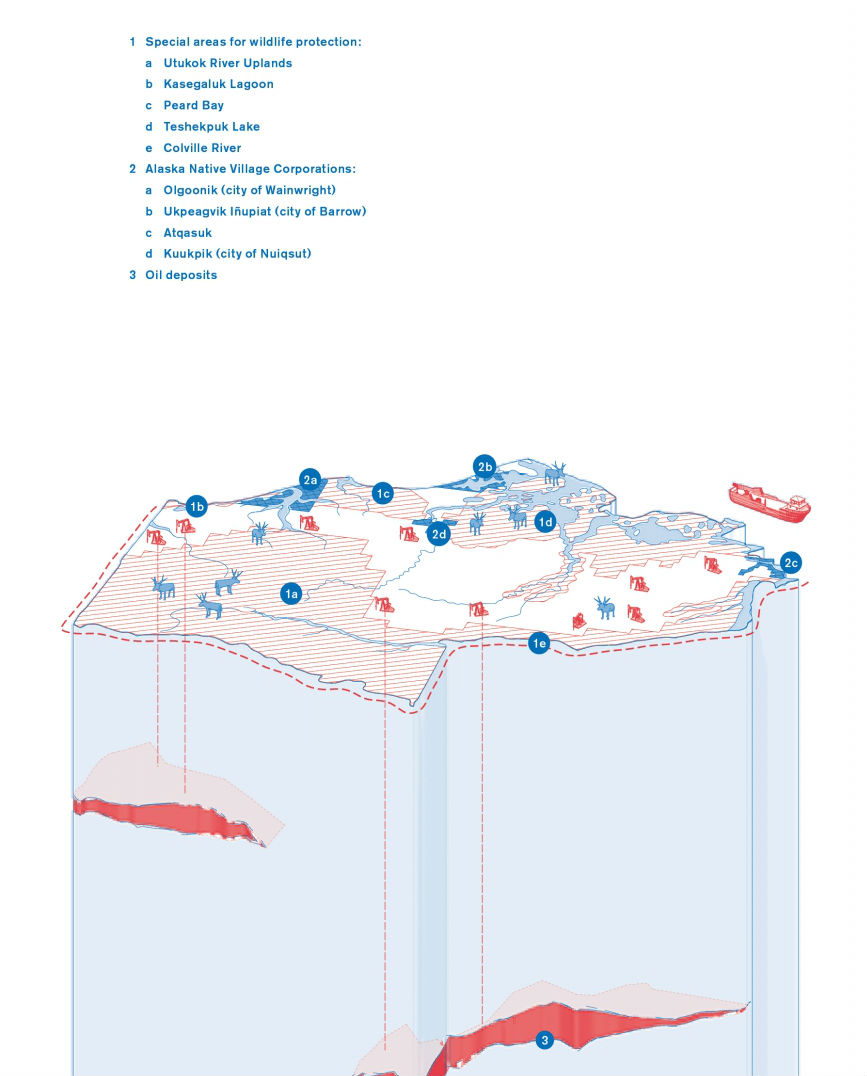 Wilderness preservation can be an important territorial strategy for energy reform. In 2013, the Bureau of Land Management carved out a protected enclave for the habitat of caribou and migratory birds from the 22.8-million-acre National Petroleum Reserve in the Alaskan North Slope.

JK: Resiliency is such a dominant term in the way we talk about climate response today. The term “resilience” meaningfully and importantly talks about the idea that the fates of many people around the world, from different backgrounds and from different experiences, are tied together. I think what that discussion doesn’t tend to acknowledge is that a lot of these fates aren’t intersecting. One person’s risk is another person’s profit. Some of the examples we talk about in the book reveal the tendency of people to exploit this as well as to mitigate it.

EC: Risk is the anticipation of certain futures—something architects and insurance companies have been doing for a long time. Risks are always changing, and in an unanticipated way, so no matter how much we calculate, we don’t necessarily know what the future holds—for example, who would have thought before 9/11 that terrorism would be a factor in design? On another level, what we’re calculating sometimes says more about ourselves than the world that’s really out there. With climate change, we can know the world only through these calculations, so architects need to be aware of how they are constructed.

JK: Maybe our response to risk needs to be one of humility. A lot of our technological fixes have proved to be both a cure and a source of new problems at the same time. Decisions can be made in a state of uncertainty, but only with vigilance—we need to evolve through the impact of design decisions that are often unpredictable.