Unfriending Big Brother: We Can’t Quit the Internet, But We Can Set Limits

The government collects our texts
and emails. Our columnist wonders
why we’re so surprised. 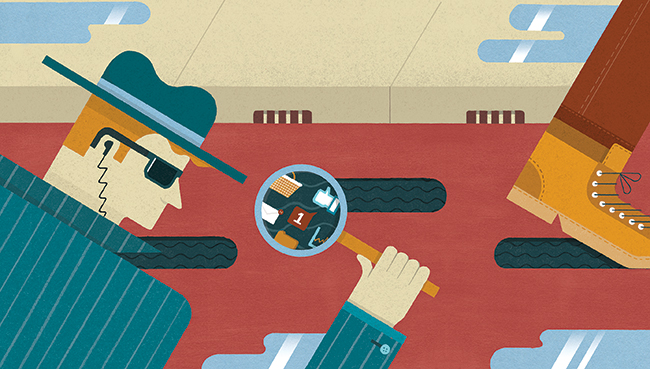 The trend of the season was color and the attitude was the future,” said Tonne Goodman, the fashion director of Vogue, explaining the 12-page September spread by photographer Steven Klein in which models with severe haircuts strode through a surreal landscape (Lubbock, Texas) in big, brightly hued coats, their blank android gazes ﬁxed on the weird silvery glasses they all wore. Being featured in this doorstop issue—902 pages—of the world’s most important fashion magazine was viewed by some as a water-shed for Google Glass, the moment when this much-maligned wearable computer stopped being the embodiment of geekiness and became an object of desire. The odd thing is, Glass was represented less as a chic fashion accessory—a bit out  of reach, like a Stella McCartney overcoat—and more as a workof science ﬁction.

The fashion shoot recalls that moment in the 1990s when the Internet was still mostly fantasy, when its promoters could still get away with describing the electronic realm, as author Douglas Rushkoff once did, as the “next dimensional home for the consciousness.”

But it isn’t like that, is it? Yes, the doofus holding the iPhone ahead of him, impeding progress as he plods up the subway steps, checking Facebook, clearly has his consciousness in some other dimensional home. And I fear it’s only a matter of months before we see the effects of Google Glass or some similar device on our streets, highways, and subway stairs. The early adopters won’t look like Vogue’s ice goddesses, and they inevitably will get in the way. Public service announcements about the dangers of driving while wearing computer-embedded specs soon will follow.

None of this is science ﬁction any more. But somehow we failed to mature beyond the 1990s fantasy version of our technological moment; call it the age of innocence. That innocence dried up once and for all in June, when the ﬁrst story based on Edward Snowden’s revelations about NSA spying was published by the Guardian. It’s difﬁcult to believe that otherwise intelligent people trusted in the overall beneﬁcence of the Internet for so long, but how else to explain the shock that accompanied the revelation that America’s shadowy intelligence operatives were stockpiling our data—meta and otherwise?

We all conveniently forgot that the Internet was largely invented by the Pentagon at its Advanced Research Projects Agency, which funded research into moving information as packets, transforming words and ideas into data. And what have we been doing all these years if not inventing ways to convert our every waking moment—and some of the sleeping ones—into data? We’ve succeeded in transplanting every imaginable activity—from ﬁnding a sexual partner to buying dog food—into the digital arena. Everything we do is data. And what is data for if not to be collected and analyzed? Couldn’t anyone have predicted that the wholesale collection of data by government was where this was all heading? Everything we do leaves a trail. Buy a pressure cooker from Amazon and Homeland Security shows up on your doorstep (or, at minimum, pressure-cooker ads turn up on every single website you visit). As Oregon Senator Ron Wyden said about smartphones in a July talk at the Center for American Progress, “The piece of technology we consider vital to the conduct of our everyday personal and professional life happens to be a combination phone bug, listening device, location tracker, and hidden camera.”

So what do we do now? Some people actually claim to be quitting the Internet. Pamela Jones, founder of the legal website Groklaw, decided to shut it down in the wake of revelations that email is, almost by deﬁnition, insecure. “There is now no shield from forced exposure,” she wrote in a farewell missive.

She cited Primo Levi’s writings on Auschwitz to argue that the absence of privacy is dehumanizing and concluded, “after all my research and some serious thinking things through… I can’t stay online personally without losing my humanness, now that I know that ensuring privacy online is impossible.”

It took her this long to realize that? Hasn’t the Internet always been insecure? We pretty much wrote off privacy when we bought in. We revel in our lack of privacy. Big Brother wasn’t imposed on us; we friended him.

Maybe we shouldn’t quit the Internet. Maybe we should point out that it no longer exists. Note that I am speaking as someone who now keeps an iPad bedside and checks the news, the weather, my email, and my Twitter feed the instant I open my eyes in the morning. I am speaking as someone who greatly enjoys the tranquility of the one day a week we pack the dog off to daycare, but then spends much of that day watching him frolic—silently—on a webcam.

My boyfriend, Ed, and I recently spent two weeks in the Catskills at a house that had no cell service or cable TV. It did, however, have Wi-Fi. So Ed downloaded Line2, an app that allowed him to call and text using Wi-Fi, and I simply forwarded my cell phone to the house’s landline. All good, except that we experienced several daylong Internet outages. Ed repeatedly drove down the road to the nearest patch of cell phone coverage. We sometimes drove six miles to visit a coffee bar with free Wi-Fi and then farther for a hard copy of the New York Times. Without the Internet, we were obliged to drive.

And without the Internet, I became acutely aware of how impossible it is to get anything done. Sans Google, for example, I’d have to start calling people on the phone to ﬁnd things out. Of course, my landline is supplied by Verizon, which (as we now know) hands over its records to the NSA. Without Internet access, I would have to go to the physical library, like I used to, and look things up in books. Of course, the New York Public Library, after 9/11, began keeping track of the books people were reading, even in that great symbol of democracy, the Rose Main Reading Room. Wherever I go, my data trail follows.

Oh, and if I were really serious about erasing my trail I’d have to give up my Citi Bike key, my MetroCard (or pay for it with cash), and my E-ZPass. I couldn’t visit the many ofﬁce buildings where they snap your photo in the lobby, or access a cash machine or, for that matter, walk down most streets because security cameras are always watching.

Giving up the Internet isn’t an option. The Internet as discreet electronic alternative to the real world is long gone. We can’t go ofﬂine because electronic data is embedded in every aspect of daily life. This isn’t a revolution anymore. It isn’t a special set of circumstances to which the old rules—like the Bill of Rights—don’t apply. It’s just life.

Which is why we need to unfriend Big Brother. We need to tell him that the party’s over, it’s time to go home. The only way to do that is to create limits to how and why the government can access the data trails we inevitably leave. The Electronic Frontier Foundation (EFF), an organization formed in 1990 to defend civil liberties in new technological environments, has compiled a good list, including eliminating “bulk collection” of data (like from all Verizon customers) and making Fourth Amendment restrictions against “unlawful search and seizure” apply to searches and seizures made with a computer.

The Internet is over because the Internet is us. The rules that apply to the myriad details about ourselves that our devices generate—whether we want them to or not—shouldn’t be any different than the rules that apply to what comes out of our mouths or our pens. Senator Wyden says, “Without adequate protections built into the law there’s no way that Americans can ever be sure that the government isn’t going to interpret its authorities more and more broadly, year after year, until the idea of a telescreen monitoring your every move turns from dystopia to reality.” EFF policy analyst Mark Jaycox calls a bill introduced by Vermont Senator Patrick Leahy (and cosponsored by Wyden, among others) “a good start” at reining in the NSA, but adds “no [current] Congressional bill ensures that the indiscriminate collection of innocent Americans’ calling information will stop.”