The Untapped Promise of Arctic Urbanism

The cities of the Canadian Arctic are contending with decades-old planning mistakes that ignored indigenous settlement patterns and knowledge.

By: Lola Sheppard and Mason White 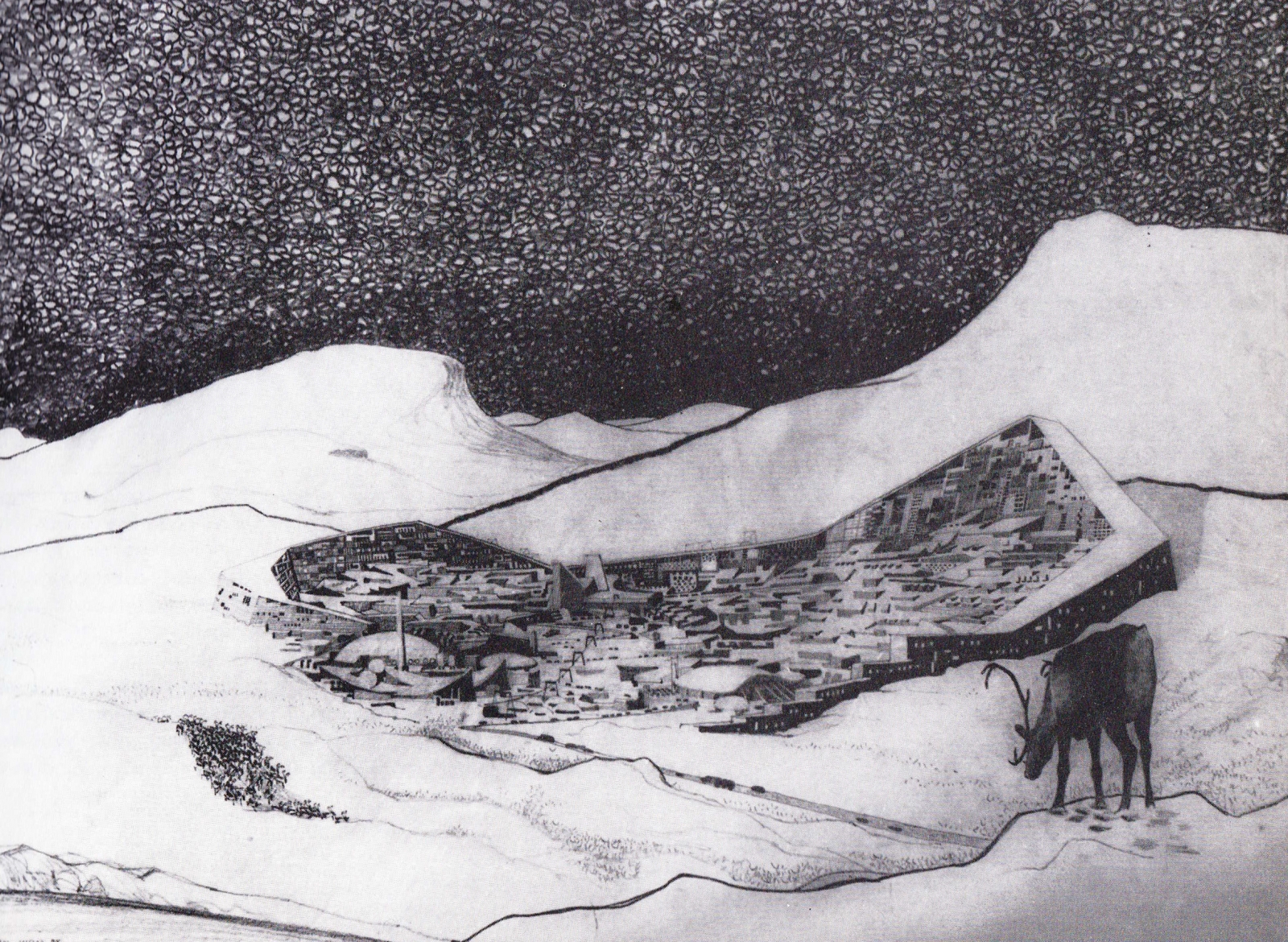 Canada’s North is home to the fastest-growing population in the country, with more than 115,000 people living in small, dispersed, and isolated communities.

But to the architects who attempted to forge a new kind of Arctic urbanism there 50 years ago, it appeared breathtakingly vast and empty. At the time, the region—comprising Yukon, Northwest Territories, and Nunavut—was something of a hotbed of modern urban planning. Practitioners devised ambitious urban works for governments and private corporations that used modernization not as a cultural project, but as a tool to bring aboriginal people into the “modern world” and compel them to embrace southern practices.

Between the 1890s and the 1950s, when debate increased about the status of Inuit as independent citizens or wards of the state, several catalysts drove the transition from traditional temporary settlements to permanent ones. Food and game availability, the promise and extraction of mineral resources, and the assertion of national sovereignty merged with a general desire to build modern communities in the Canadian Arctic. The first permanent settlements changed the seasonal patterns, economics, and social structures of aboriginal peoples such as Inuit (in the north and northeast) and Dene (in the northwest), fundamentally altering the very physical and spatial realities of daily life. Anthropologist Frank Tester describes this dramatic change as a “totalizing transformation” involving relocation programs, residential schools, and other atrocious mistakes made in conjunction with the cause of rapid “progress.”

The new town of Inuvik in the Northwest Territories was emblematic of this push, intended by bureaucrats in Ottawa as a showcase of modern development in the region when it was settled in 1954. The declaration on Inuvik’s dedication plaque celebrates its mission as “the first community north of the Arctic Circle built to provide the normal facilities of a Canadian town.” The focus was implicitly on the delivery of services, not architecture or urban form. The state required basic accounting—the construction of so many schools or hospital beds or housing units—rather than addressing questions of the quality of design, especially in the early days of northern nation-building. 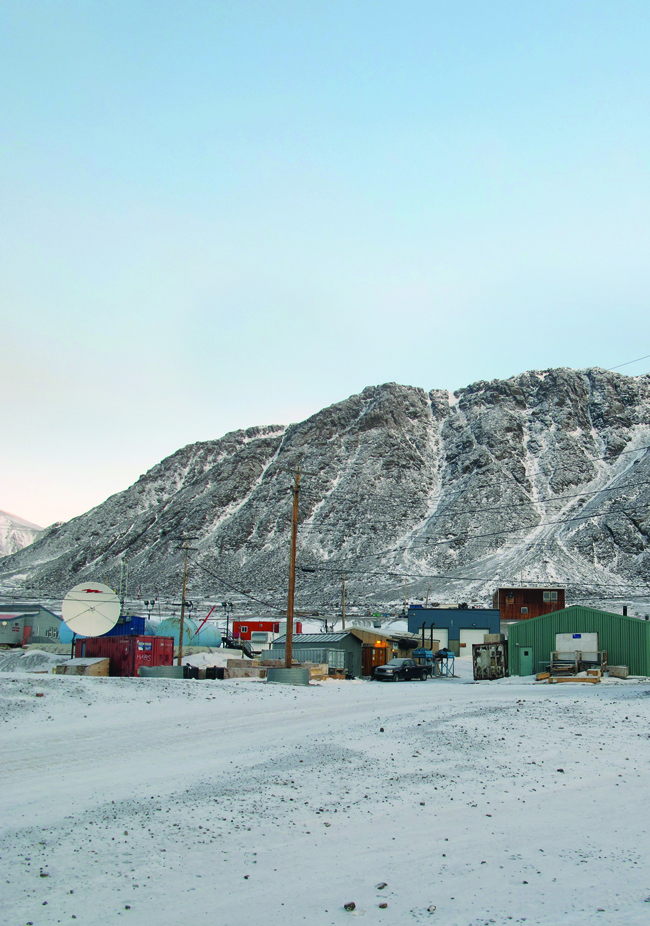 Grise Fiord was created by the Canadian government in 1953 by relocating eight Inuit families to assert sovereignty in the High Arctic.

Still, modernization in the North coincided with the heady days of architecture and urban design experimentation initiated in the 1960s. To many practitioners, the northern “frontier” offered an ideal test site for ideas already present within a broader zeitgeist of megastructures, capsular cities, prefabrication, and modularity. These concepts began to manifest themselves in a series of provocative and ambitious proposals that posited a futuristic Arctic urbanism as a defense against the sublime yet threatening environment—and so disregarded the profound connection that Inuit and Dene felt to the land, the climate, and the geography.

Schemes such as New Town I for Frobisher Bay, the historical gateway to the Arctic and later an American military base, were very much in keeping with this approach. Prepared by the chief architect’s branch of public works, the project envisioned a dozen clusters of three 12-story towers radiating from a large central dome containing two schools, two churches, a community center, a fire hall, government offices, shops, restaurants, and a hotel. In their ambition for total metabolic and programmatic self-sufficiency, the designers also included an atomic heating plant, a hydroponic vegetable garden, and a battery-powered internal monorail. Tower clusters were linked by a series of enclosed elevated walkways and in turn connected directly to the dome, providing an interior environment protected from the harsh climate.

These provocative and ambitious proposals disregarded the profound connection that Inuit and Dene felt to the land, the climate, and the geography.

The idea that urbanism could shield against an inhospitable land was further explored by the architect/engineer Frei Otto’s 1971 feasibility study for an Arctic city. Otto, who developed the plan for the German manufacturer Hoechst AG in collaboration with Ewald Bubner, Kenzo Tange, and Ove Arup & Partners, conceived an enclosed pneumatic dome two kilometers in diameter, covering a city of up to 40,000 inhabitants. The concept was not intended for a specific site but instead addressed the general notion of insulating against the Arctic environment—part of a larger postwar global interest in frontier conditions, whose parallel could also be found on the other side of the Arctic, in Alaska. “Seward’s Success,” yet another domed would-be city drawn up by Adrian Wilson Associates of Los Angeles, preceded Otto’s enclosed city by a couple of years but specified a place—Point MacKenzie, just north of Anchorage. Tellingly, both designs assumed that the climate was incompatible with conventional city building and could be circumvented only by manufacturing an interior habitat.

While these projects offered an accelerated, high-Modernist urban vision for the North, another emergent strand of thinking called for an Arctic and sub-Arctic urban vernacular, mainly through the work of British architect Ralph Erskine. Internationally recognized for his cold-climate responsive urban designs for the Swedish mining village of Svappavaara, Kiruna, Erskine was hired by the Canadian government in 1970 to develop a proposal for Resolute Bay, the country’s northern-most community and one of the coldest inhabited places in the world. The settlement was established in 1953 when the federal government forcibly relocated Inuit from northern Quebec to the southern tip of Cornwallis Island in the Arctic Archipelago as a show of national sovereignty during the Cold War. By the early 1970s, Resolute served as the major supply air base for the High Arctic and was being considered for expanded resource exploration and extraction operations. 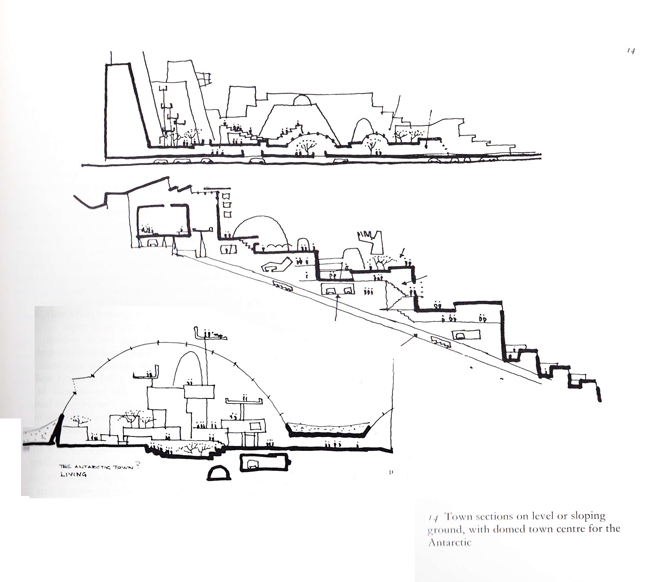 The British architect Ralph Erskine developed a portfolio of cold-climate projects set in both the Antarctic (pictured) and the Arctic. This kind of visionary urbanism had consequences for the Canadian North, where it imposed foreign planning models that disregarded traditional aboriginal living arrangements.

Intended to accommodate 1,200 residents, with plans for a future population of 3,000, the new town was to integrate the segregated community of 140 Inuit, or 32 households in all. Erskine’s scheme employed an urban “windscreen” to create a protected microclimate, forming a horseshoe layout. The perimeter was to house apartments for administrative personnel and others as well as a communal area with shops, a restaurant, and a library. At the center would be a low-density fabric of individual homes for Inuit, a free-standing church, and a school. A swimming pool and an indoor botanical garden would be attached to the apex of the horseshoe and sealed off from the climate by a bubble roof.

Beyond the unusual and contentious circumstances the plan set up, in which outsiders would surround and look down upon Inuit, the location and role of a windscreen perimeter wall clashed with local traditions. While Inuit preferred to build their settlements near the shore, for access to hunting and fishing sites, Erskine sited the town on a hill, presumably for wind orientation and views of the bay, which appealed to the qallunaat, or non-Inuit, sensibility. The architect’s focus on protection from the wind, which also appealed to Euro-Canadian convention, overlooked the fact that wind constitutes an essential component of clearing snow, and an enclosed wall would encourage snowdrifts to pile up among Inuit houses. The homes were relocated to the new site and construction began on a fragment of the perimeter wall building, before the project was abandoned in 1978 for economic reasons.

These initiatives largely failed because of their overly totalizing approach. Yet contemporary urban planning in the North has veered to another extreme, one of efficiency and expediency, leading to piecemeal development. As northern cities continue to grow, they tend toward a suburban density defined by subdivisions and large lots, wide gaps between buildings, and an ambiguous public realm. Many town plans propose subdivisions tethered to the city by single roads, contributing to a sense of sprawl and a fragmented urban fabric heightened by isolation from major infrastructural networks.

The experiments of the past century displayed great architectural imagination and innovation, but lacked both of these qualities in responding to the sociocultural opportunities that could have emerged from more considered hybrids of traditional and modern settlement forms. This remains the untapped promise of Arctic urbanism—a true northern vernacular able to match the ingenuity and adaptability
of its very people.

This text was adapted from the new book Many Norths: Building in a Shifting Territory (Actar, 2017), by Lola Sheppard and Mason White.