In the latest edition of Signgeist, spray paint takes on a political dimension.

I have a love/hate relationship with graffiti. I love it because some of it is quite beautiful, reflects our political and social views, or is just plain clever.

I hate it when it is no more than visual pollution, downgrading the urban environment and reflecting a community in decline.

Generally, it intrigues me. I try to appreciate and understand the motivation behind the graphic: for better or for worse, it is the visual expression of a moment in time. And as a designer, I often find redeeming beauty and communicative properties in graffiti. Consider for a moment the emotional expressiveness and exuberance (or fear) of executing a spontaneous act of vandalistic expression. Sure, some graffiti is planned and executed with extreme detail (the Atlanta-based artist Hense, for example). But more often than not, it is purely spontaneous.

In the downtrodden ’70s and ’80s, New York saw an explosion of graffiti splattered across building walls and subway cars. The visual chatter was horrific. Subway cars were awash in individual tags layered one upon another, each larger and bolder than the tag beneath it. The visual anger caused riders to be anxious and edgy—the visual equivalent of fingernails on a chalk board. Passengers developed an ability to tune out the visual scrawl, and when the cars were cleaned, attitudes improved. Artsy Soho of the ’80s was home to amazing creative expression. Artists took to graffiti with relish, and Keith Haring was among the more prolific and well-known. I remember seeing his simple chalk drawings on the black block-out paper that New York City Transit used in the poster niches along the subway platforms. Eventually, galleries picked up his work and he received commissions for murals around town and around the world. 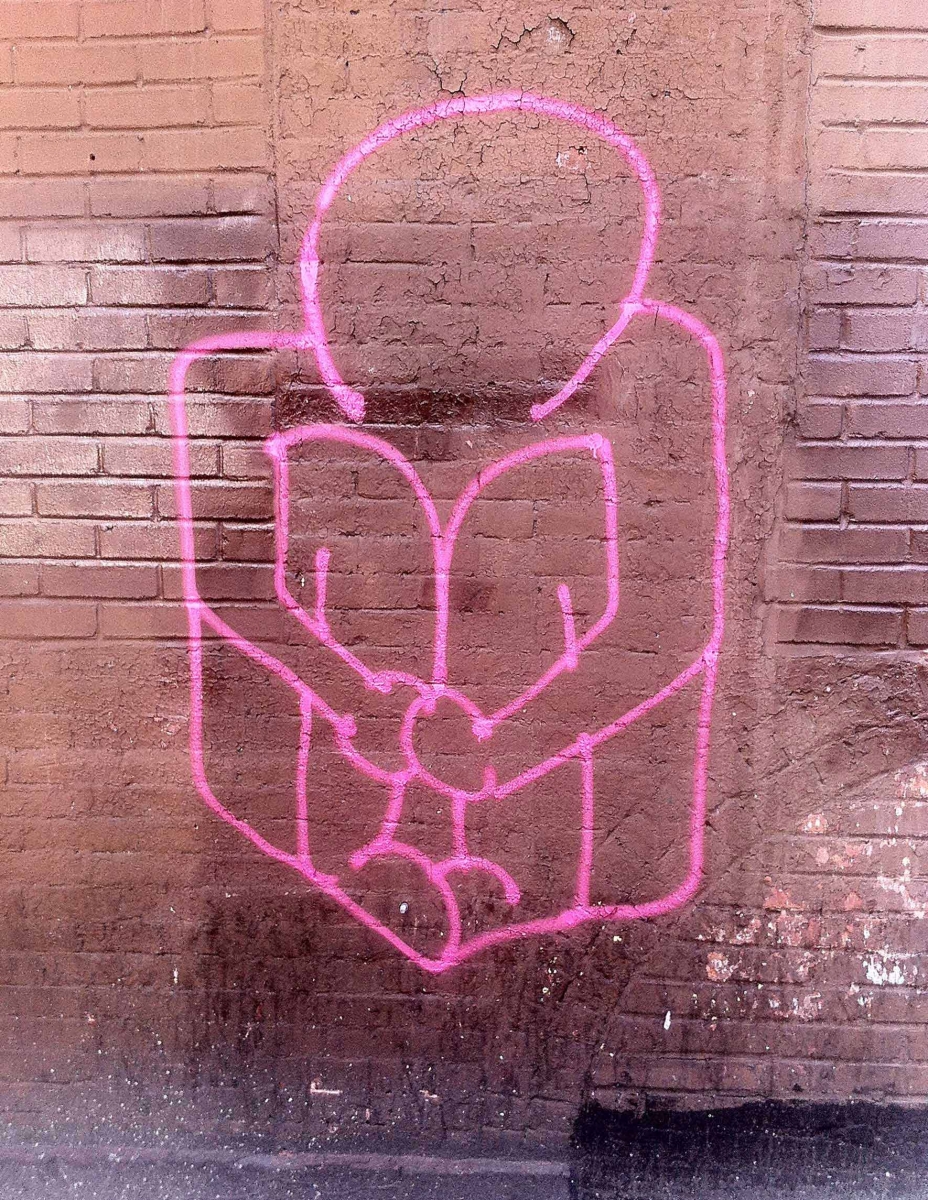 Some graffiti uses materials at hand—messages in the concrete or “updated” street signs—while other artists create inspired graffiti in the form of dimensional elements affixed to sign posts. Some is monumental in scale, using building structure to define shape and position; some is small and detailed, using hand-drawn, calligraphic letters to form the word “mustache” into the curly whisker on posters in the subway. It all reflects the personality of the artist—playful or off-beat, forcefully political, or politely progressive. 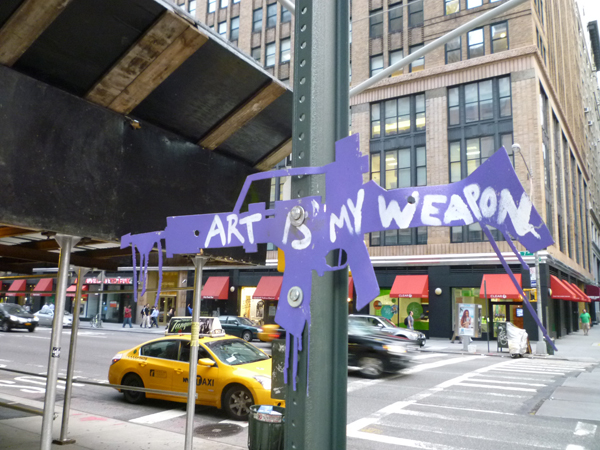 Elsewhere in Chelsea, new types of graffiti take the form of three-dimensional elements affixed to sign posts. This example lasted only a few days before disappearing. I wish I had taken it for myself—it was a fabulous example of art, politics, and graffiti coming together. At least I have a picture! 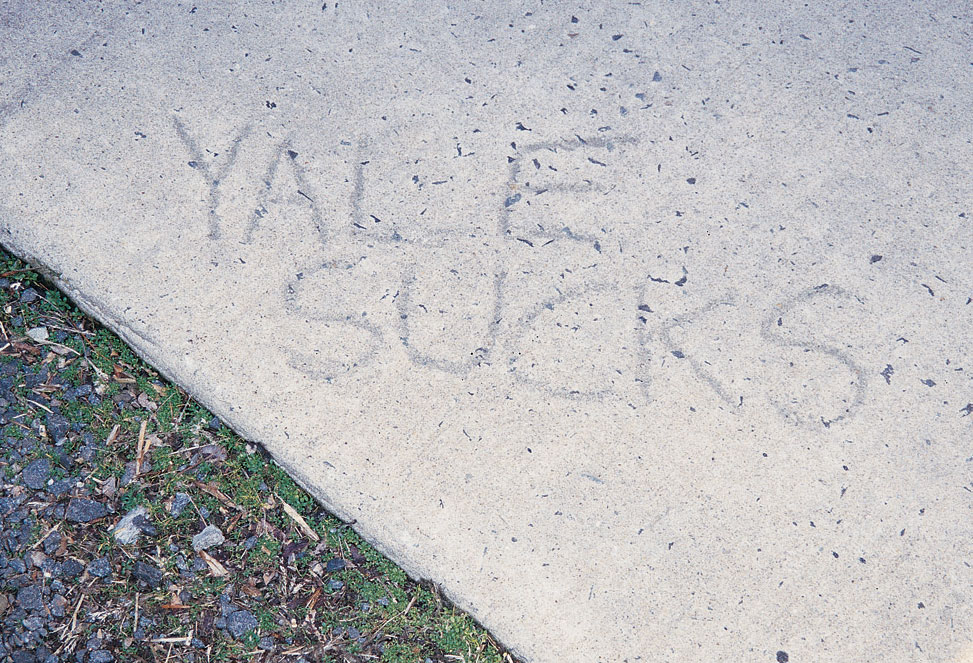 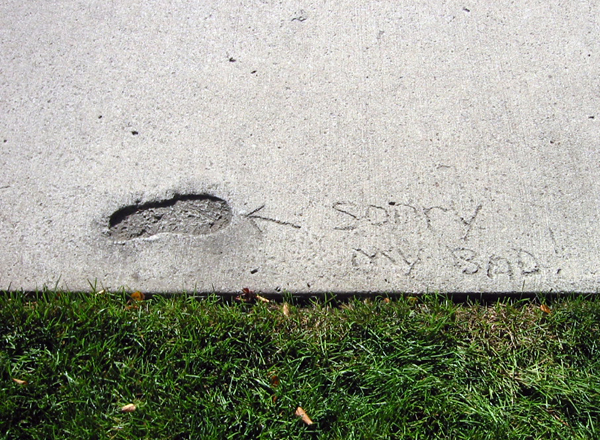 Concrete is a truly tempting medium and a permanent foray into the world of graffiti. The top photo was taken at Princeton University and clearly demonstrates a bias. The other, found on the streets of Detroit, is lighter and makes people smile (although I’m sure the property owner was not as amused as I was). I especially like the skill with which the arrow is rendered. 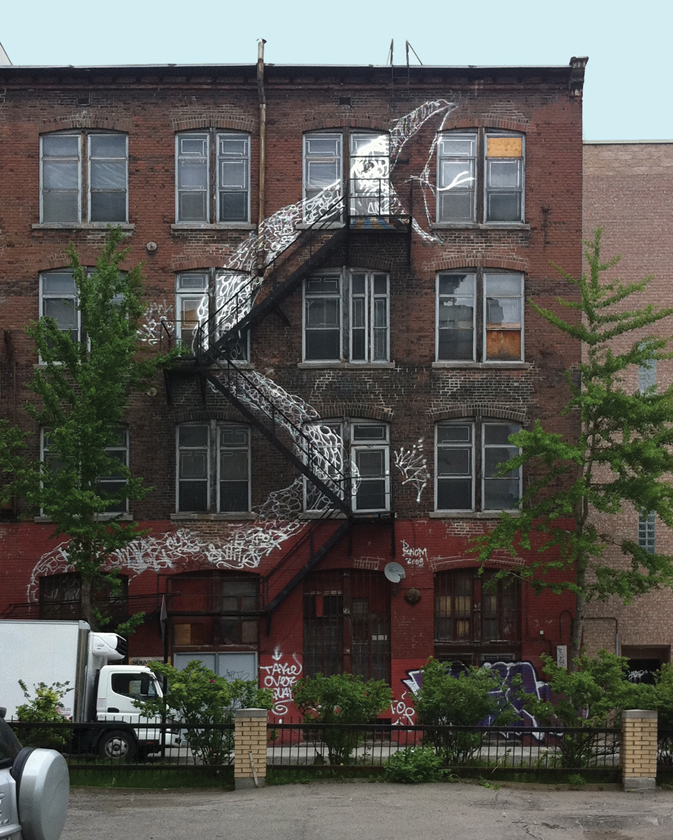 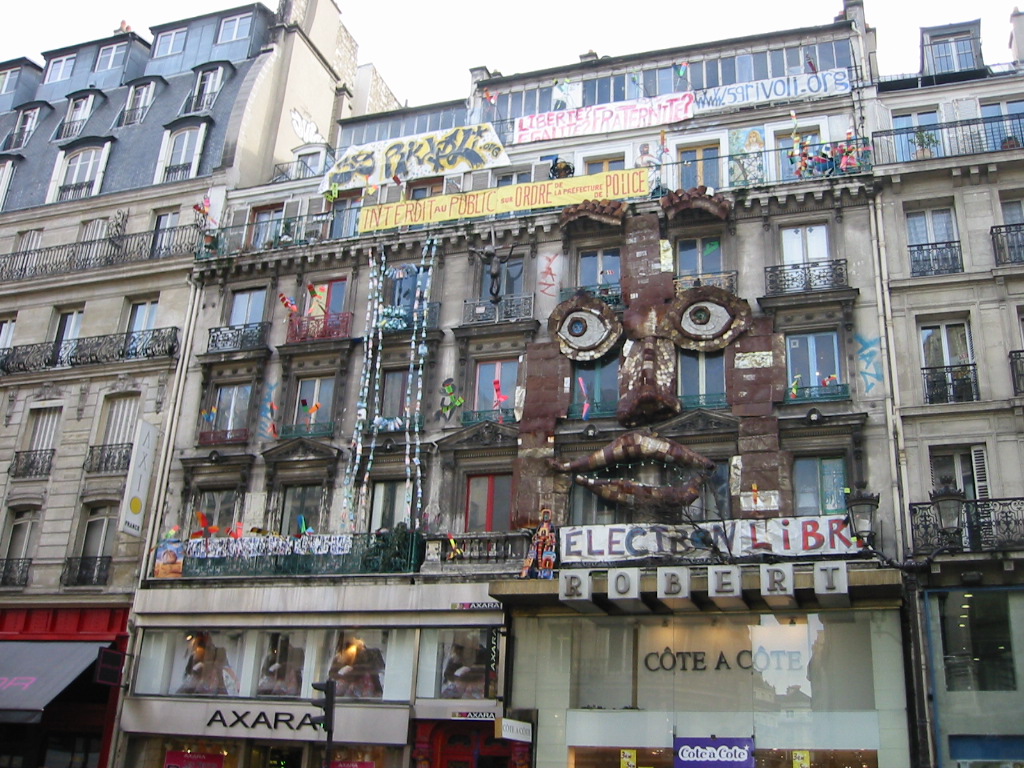 Some graffiti takes on monumental scale such as these building-sized creations. The snake in the top photo makes great use of the building’s fire escape to define the shape and position of the body. It is cleverly composed of hundreds of smaller tags and inscriptions. It lives in Montreal. In the photo above, France offers no less politics and grand scale in the transformation of a building facade to face. 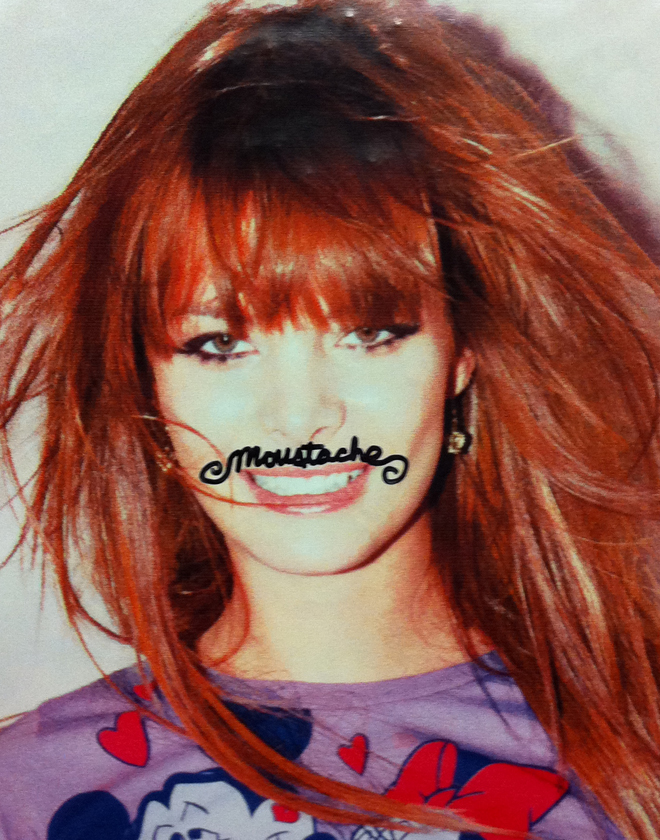 In the past few years, one of my favorite graffiti-ists drew curly mustaches on posters in the subway using a hand-drawn, calligraphic rendition of the word “moustache.” Unfortunately, police caught the poor guy and he was fined; I was sad to see the end of such a playful expression. 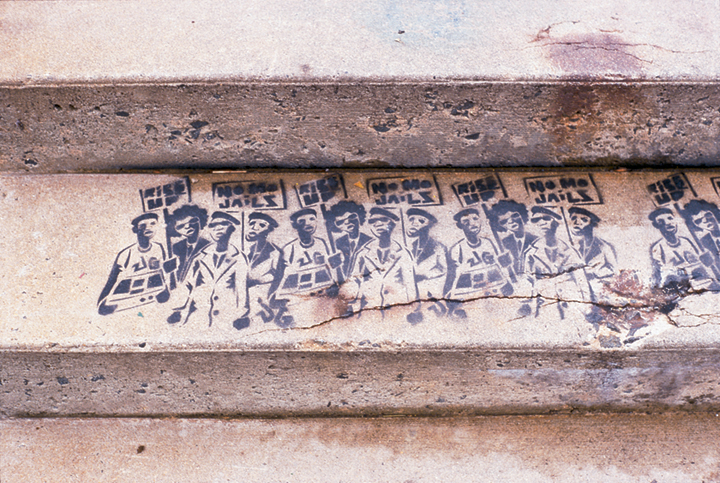 Political and social graffiti like this one stenciled on the stairs of a train platform in New Brunswick, NJ—“No Mo’ Jails.” Or the one below—rendered in a simpler, more timid style—about consumption. 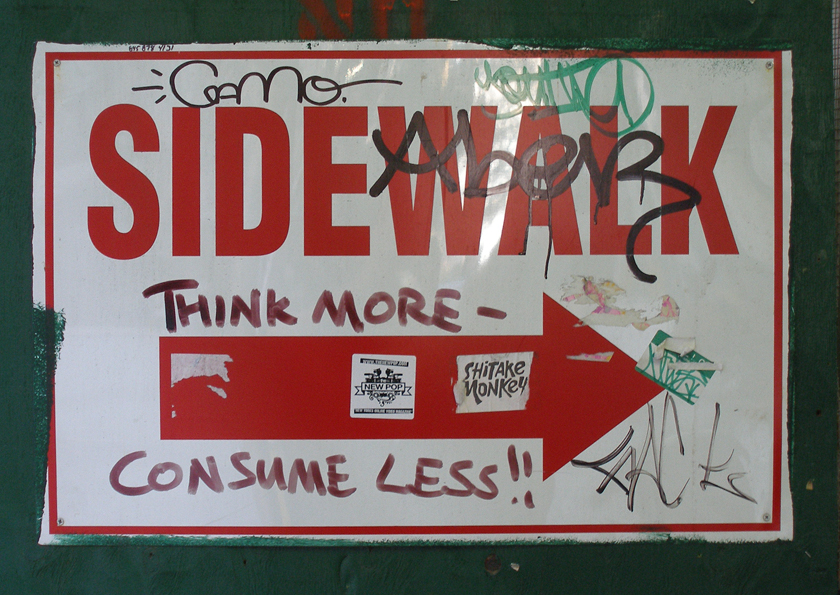 The creative spirit is most at the top of its game when common street elements are enlisted into creating the graffiti message. What’s not to love about love? 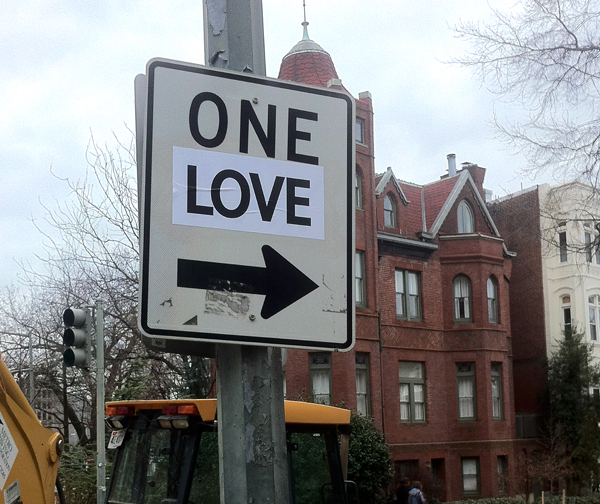 Like it or despise it, graffiti isn’t going away. It’s been around since humans first picked up charred sticks and scrawled on cave walls. What most people don’t appreciate is the story behind it, telling us about time, place, people, society, politics, culture, and art.

David Vanden-Eynden, AIGA, FSEGD, and his partner Chris Calori, AIGA, FSEGD, lead Calori & Vanden-Eynden (C&VE), an internationally recognized, New York-based design firm specializing in the planning and design of signage, wayfinding, branded environments, identity, and user navigation systems. Chris literally wrote the book on the subject—Signage and Wayfinding Design: A Complete Guide to Creating Environmental Graphic Design Systems—which was recently published in Chinese and will be issued in a second English edition in 2015.