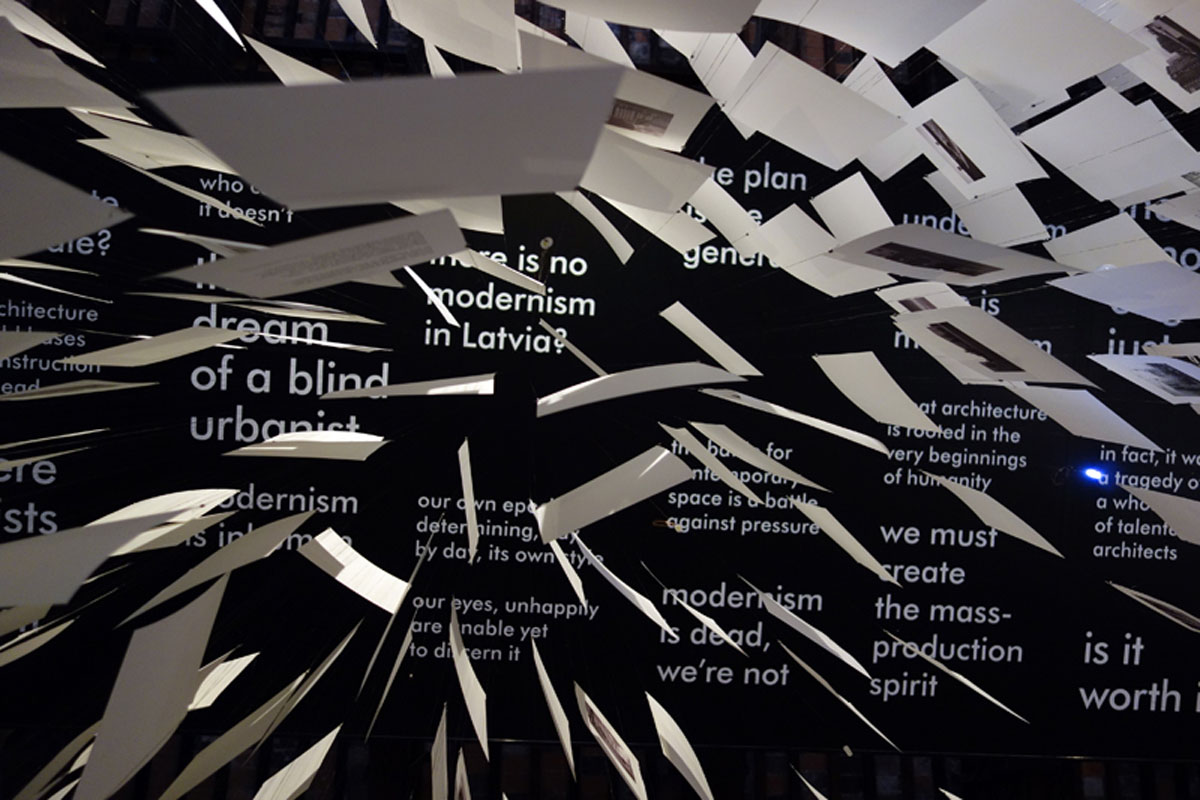 A view from the floor of the Latvian pavilion. The sheets of paper carry images of Modernist buildings; the ceiling asks, “There is no Modernism in Latvia”, commenting on the lack of historical scholarship.

“There is no Modernism in Latvia?” asks the roof of Unwritten, the Latvian pavilion at the 2014 Venice Biennale. Visitors wander through a cloud of white sheets of paper that answer the question—there is, indeed, Modernist architecture in Latvia, some of it monumental. But its stories are untold because the heyday of Modernism in the Baltic nation was accompanied by a repressive Stalinist regime, followed by many decades of Communism. Not that Latvians have no interest in history—in a statement, the curators bemoan “a wave of uncritical nostalgia” and “a superficial hipster joy at the exotic Soviet heritage.” The complaint is that the better sort of old buildings remains unappreciated. When one of the sheets of paper says, “rest in peace Modernism,” it’s unclear whether this should be read as a call to preservation or a sad acknowledgment that the movement’s history will never be quite as beloved in Latvia as it is elsewhere.

History was the star at this year’s biennale. Rem Koolhaas, the curator, intended it to be so, provoking the national pavilions with the pedantically-worded theme “Absorbing Modernity: 1914–2014,” and the thesis that “architectures that were once specific and local have become interchangeable and global.” He asked the curators “to show, each in their own way, the process of the erasure of national characteristics in favor of the almost universal adoption of a single modern language in a single repertoire of typologies.” What’s now on display in Venice, especially in the pavilions of countries outside Western Europe and North America, contradicts every single one of Koolhaas’s propositions.

Firstly, it is disputable if there ever has been a “single modern language” in architecture that was universally adopted in the Global South. But even if one were to place the work of Modernists in Beirut, Buenos Aires, and Bombay into one general category, it is their “repertoire of typologies” that seems to be in danger of erasure today. In the First World, historic preservationists have long embraced Modernist buildings (The battle front here is Brutalism and Postmodernism). But architects in many other parts of the world have a love-hate relationship with recent history. In their glass curtain-walled shopping malls, concrete cultural institutions, and mass housing, they synthesize Modernism into local needs, while letting midcentury icons crumble. 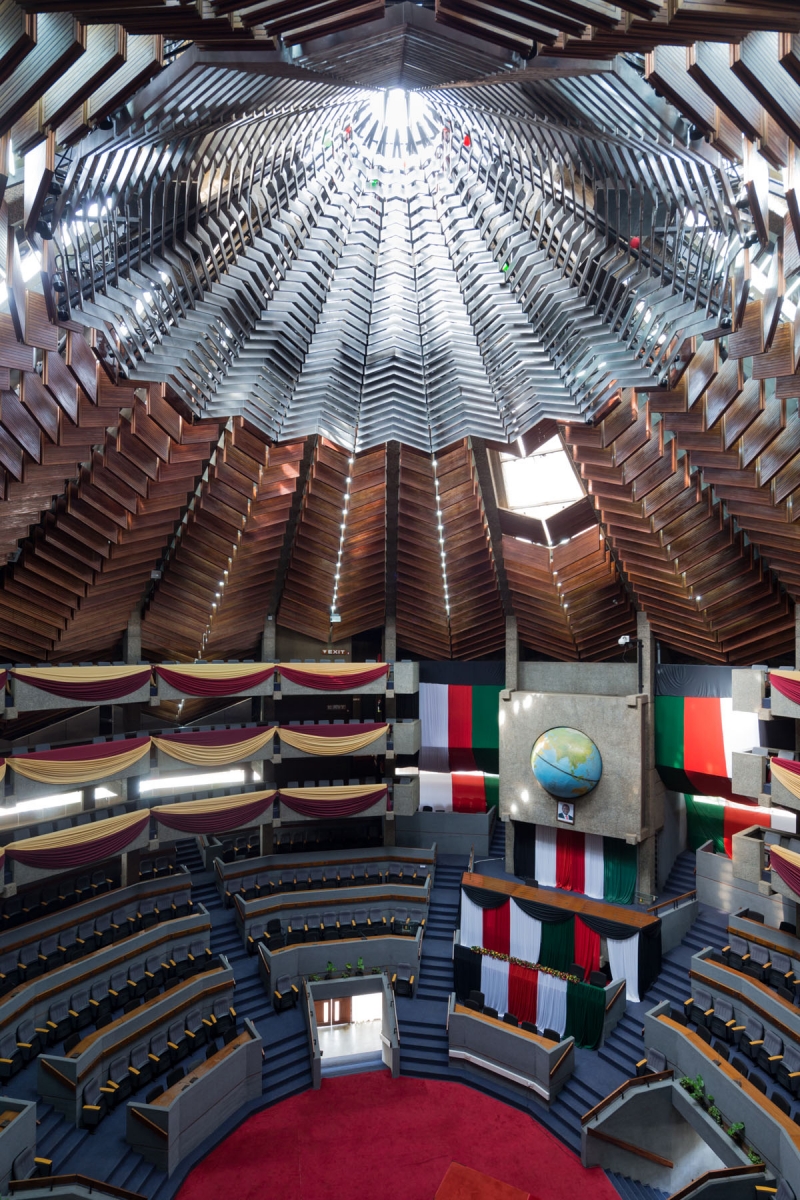 That, certainly, was the fear of the Latvian architecture firm NRJA, which curated its country’s pavilion. The danger of forgotten histories also motivated the Bahrain pavilion, curated by George Arbid and Bernard Khoury. Titled Fundamentalists and Other Arab Modernisms, the exhibit is a physical manifestation of an archive at the Arab Center for Architecture in Beirut. Visitors enter a ring of bookshelves containing copies of a book with pictures of a hundred buildings from the Middle East. A table at the center of the space situates these structures on a map, and a circular screen overhead shows people reciting the 22 national anthems of the different Arab countries. Most visitors during the opening weekend of the biennale felt too overwhelmed to engage with the installation, choosing instead to walk away with a copy of the book—a pretty accurate representation of how outsiders deal with the polyphonic history of pan-Arab Modernism. So much for a universal language.

The national pavilions also expose the inadequacy of verbs like “absorb” and “adopt” in describing the processes of modernization. While it’s undoubtedly true that modern architecture originated in the industrialized nations of Europe and America, no one should seriously believe that the rest of the world was a passive recipient of these ideas. Yet this sort of thinking—North gifting Modernism to South—remains extraordinarily resilient in architecture history. 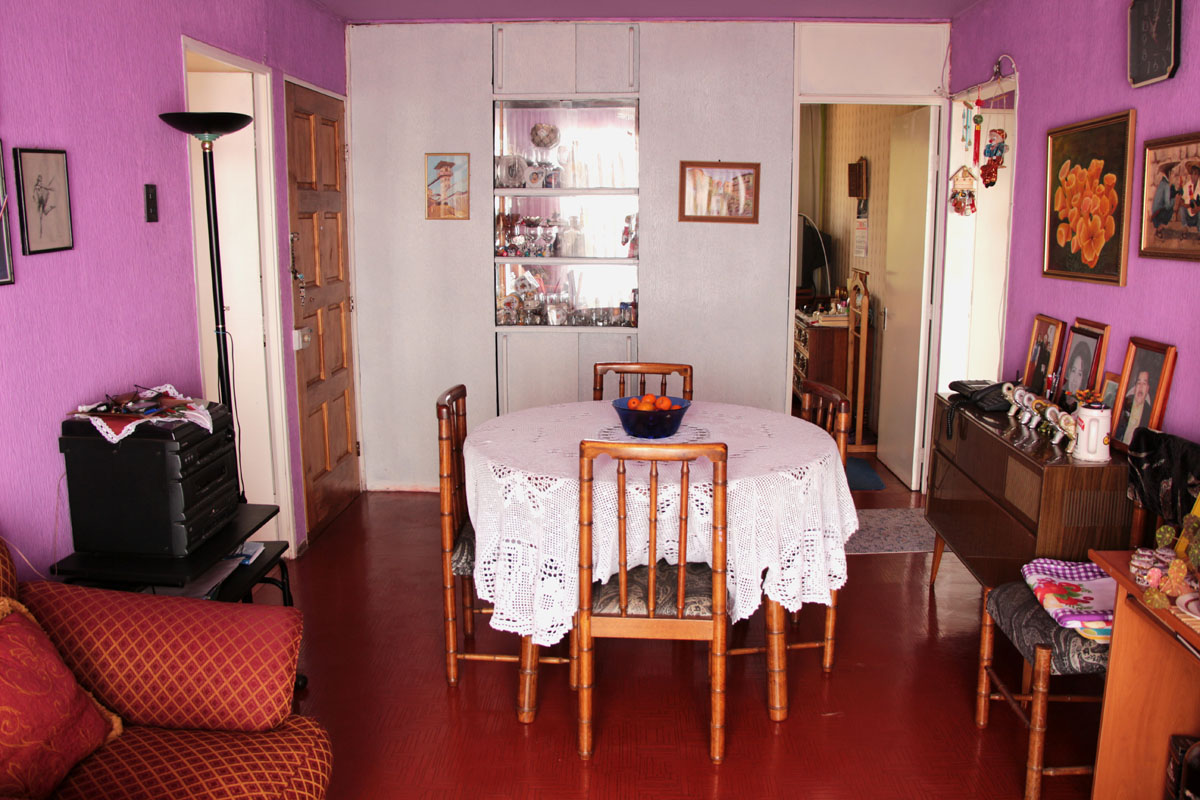 A replica of the interior of a home in Viña del Mar, Chile, constructed with the concrete panels.

The U.S. pavilion, which seems primarily based on such a notion, assembles a massive archive of works by American architects in the rest of the world, but fails to make any larger point at all. The Nordic pavilion is slightly more effective, documenting the work of professionals from Norway, Sweden, and Denmark in the newly independent nations of Tanzania, Kenya, and Zambia. It valorizes architects like Karl Henrik Nøstvik, the Norwegian who built the much-loved Kenyatta International Conference Centre in Nairobi, but also recognizes architecture as a form of dialogue. A section called “Finding Freedom” shows that many avant-garde ideas might never have emerged without the encounter between the Nordics and the Africans. But some of the contemporary photography, of smiling Africans standing in front of Modernist buildings, or of laundry hanging off midcentury structures, is in the unfortunate mode of “Look what the natives have done with our buildings.” Punjabis in Le Corbusier’s Chandigarh tend to be photographed in the same exoticizing fashion.

The problem that stands out as common to many of the pavilions is the conflation of Modernism, an architectural style, with modernity, a way of life. Since the midcentury, millions of people in the developing world have been entering the middle class and the industrial work force with intact memories of premodern life and the ruptures of imperialism. Their version of modernity might not sit so well with Modernism.

Nowhere is this distinction made clearer than at the Chilean pavilion, Monolith Controversies, which won the Silver Lion at the biennale. The exhibit focuses on the construction of social housing in Chile in the 1970s. The prefabricated concrete buildings, called “panel houses,” were based on a model imported from the Soviet Union. A concrete panel from one of these buildings takes pride of place in the pavilion. In an adjoining room, the curators have recreated the living room of one of the inhabitants of these buildings—a confection of pink walls, gold upholstery, and an overwhelming number of knick-knacks and personal belongings. The idea, it would seem, was to present a contrast between the industrialized building and the personalized interior. 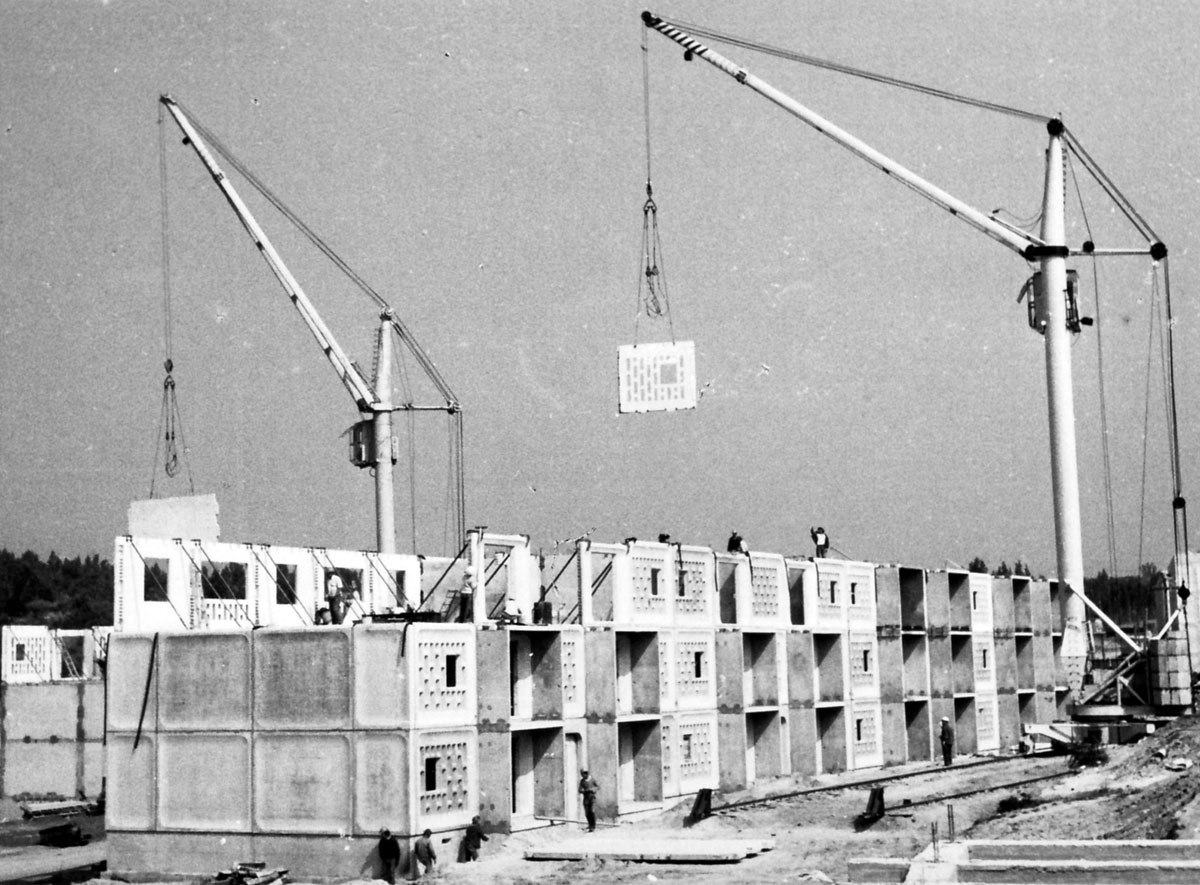 A crane hoists a concrete panel in place, from a Chilean construction site in the 1970s

But much of the bric-a-brac in Silvia Gutiérrez’s living room was likely produced through more complicated mechanisms of production and global trade than her housing was 40 years ago. Pink wall paint may be less Modernist than white paint, but it is no less mass produced and certainly no less modern.

As with democracy in governance, so with modernity in architecture: The meaning it has in some parts of the world and in some people’s lives might be quite unrecognizable in others. The biennale’s concern for the loss of local architecture smacks of the same “hipster joy” that the Latvian curators abhor, and is a pessimistic, ahistorical view of globalization. Arches and domes proliferated globally in the Middle Ages without such hand wringing, and resulted in an extraordinary flowering of local interpretations and variations.

The renewed interest in global history, represented in Venice, is likely motivated by the desire of European and American architects to continue to build mega projects on other continents. (Some of Koolhaas’s biggest works in progress are in Asia, where he is undoubtedly resisting the urge to universalize architecture.) The lesson from the national pavilions is that when architects build abroad, the problem is not so much that they must be prepared to contend with conflicting perceptions of Modernism, but that they might have to understand many different forms of modernity.