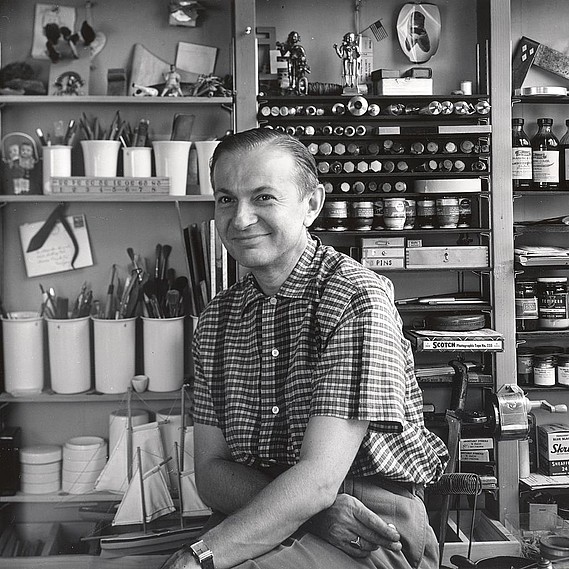 Alexander Girard, known to friends as Sandro, is pictured here in his Grosse Pointe, Michigan, studio in 1952. “Sandro was quiet, extremely serious about his work, always immaculately dressed, and looked more like an English gentleman than an American designer,” designer Marilyn Neuhart told Metropolis (“The Wit and Wisdom of Alexander Girard,” June 2012). “His style was way ahead of the curve, and he was, to some extent, an acquired taste. He had his addicted followers, and my husband and I were among them.”

Design and textile companies like Vitra, Maharam, and Herman Miller have managed to keep a few textiles and accessories by midcentury designer Alexander Girard in production, earning him his well-deserved contemporary reputation as a master pattern-maker. And yet, compared with the legacy of his close collaborators the Eameses and Eero Saarinen, the full breadth of Girard’s work remains underappreciated. “The fact that it is only now that his estate has been thoroughly appraised is not the sole reason,” says curator Jochen Eisenbrand. “Interior design is still a neglected discipline in the history of design when compared to architecture, and the subject of decoration was long reviled by the avant-garde.”

Through a painstaking examination of his archives—including more than 5,000 sketches and drawings as well as around 7,000 photographs and slides—and in collaboration with Herman Miller and Maharam, the Vitra Design Museum in Weil am Rhein, Germany, has put together a landmark exhibition, Alexander Girard: A Designer’s Universe, which opened March 12. In this exclusive selection from the exhibition’s catalogue of essays and images, Metropolis looks beyond the iconic textiles and patterns to reveal a hitherto unseen side of Girard. 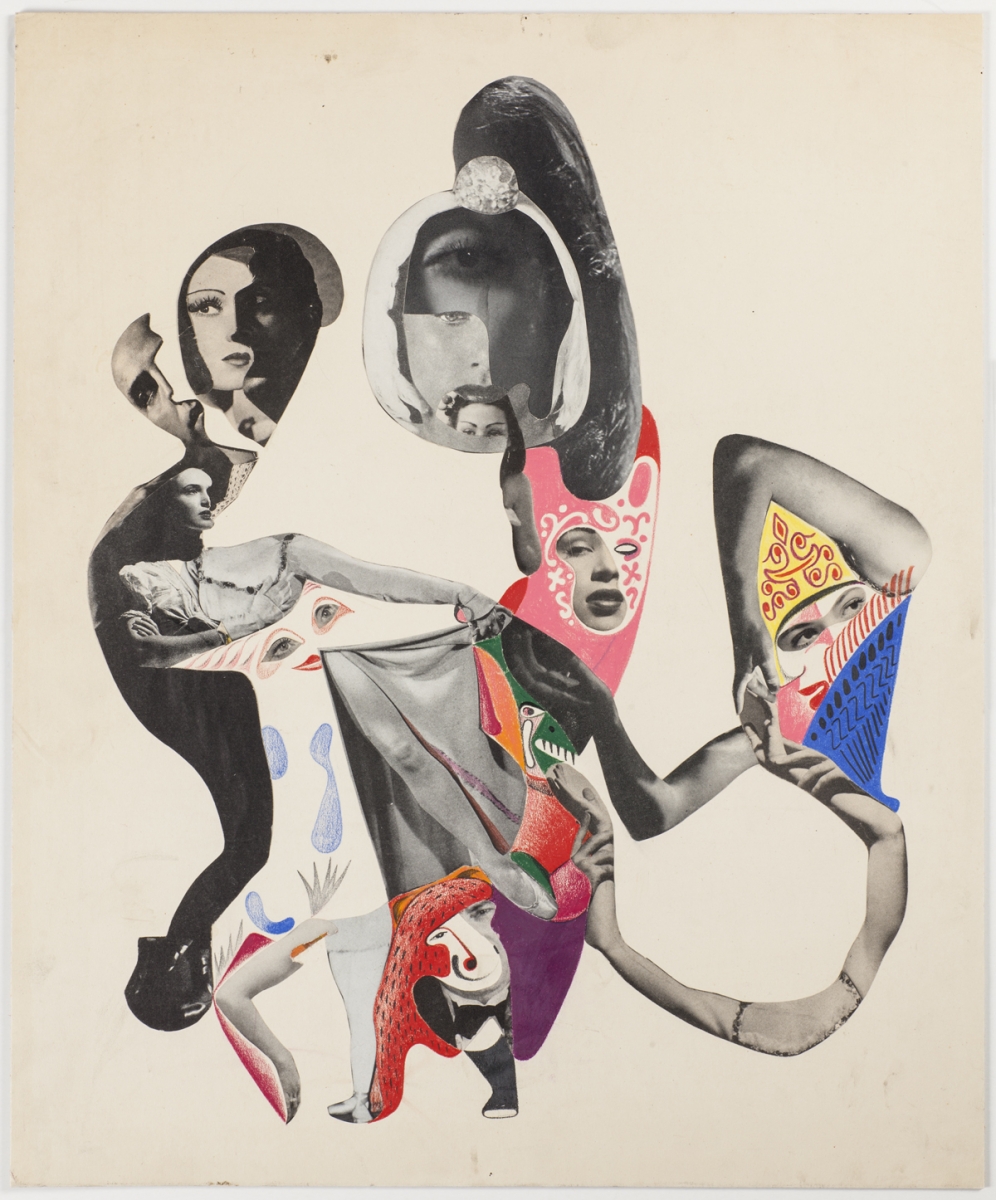 Girard clipped artwork and original illustrations from magazines like Vogue, Harper’s Bazaar, and The New Yorker— then assembled them in albums in alphabetical order, from the work of Mexican artist Miguel Covarrubias to that of the painter Antonio Ruiz. This collage from the 1940s includes such clippings among its elements.

This painted-wood sign was originally displayed in the 1969 exhibition, India: Complexity, Diversity, Enrichment, Mythology, at St. John’s College in Santa Fe, which showed objects from Girard’s collection. “I remember getting into a so-called low-caste village in India, outside of Jaipur, and the village looked exactly like a Pueblo Indian village,” he said in a 1977 interview. “It was just unbelievable—you could take pictures and compare the two, and you wouldn’t even know which was which.” 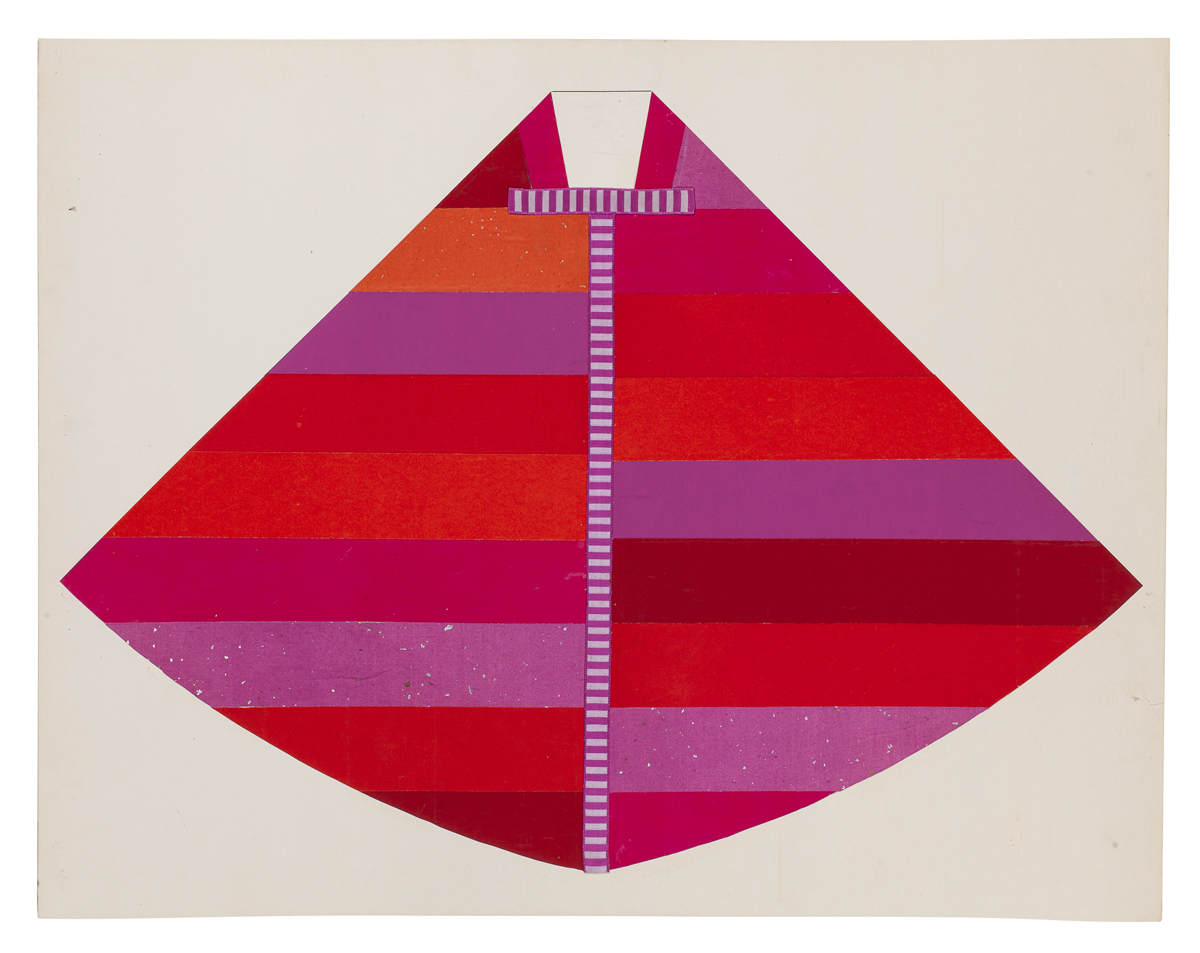 Girard designed an altar and these colorful priest’s vestments for the MIT campus chapel in Cambridge— one of Eero Saarinen’s most famous buildings. “Perhaps the most important thing Girard collected in his travels around the globe was a deep sense of the primacy of textiles in the rituals of life,” writes historian Susan Brown. This particular design, however, was never executed. 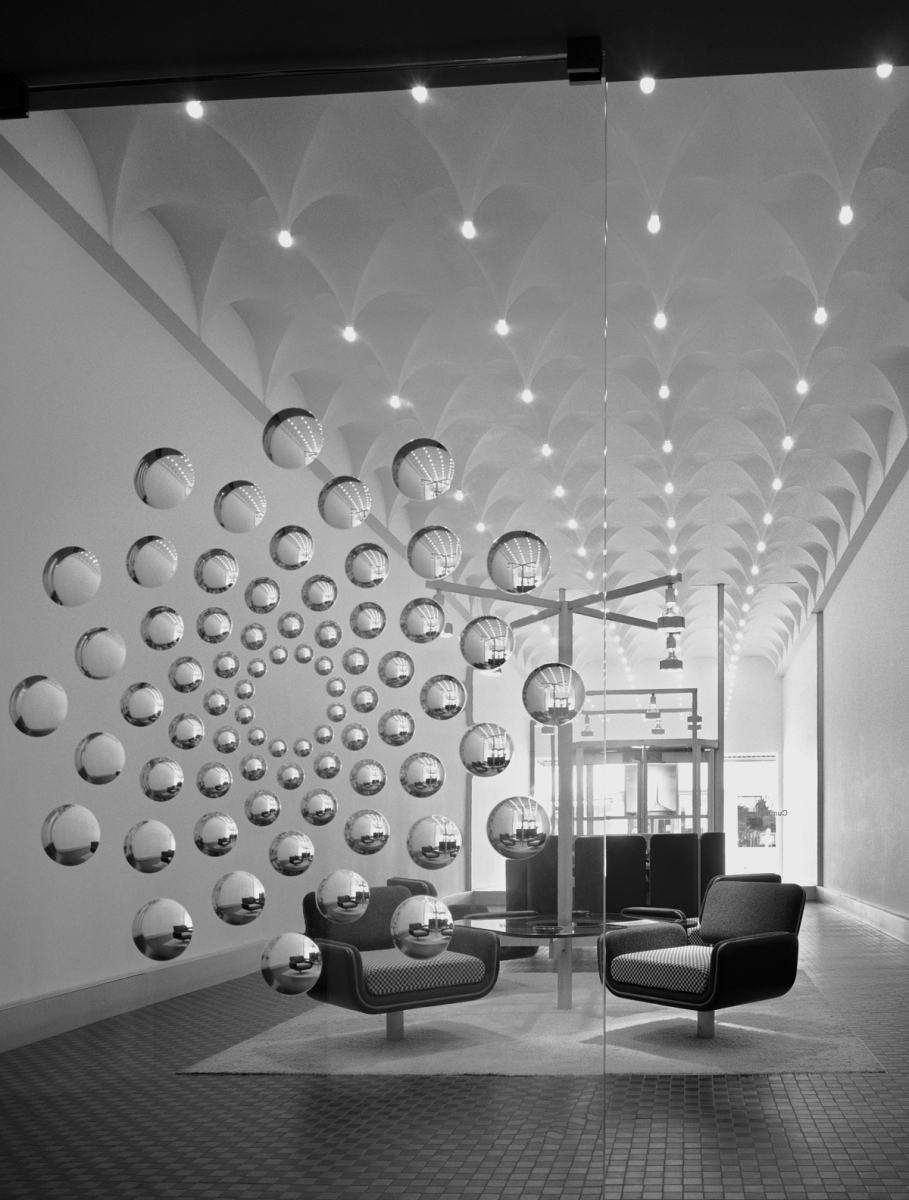 In 1965, Girard designed the interiors of the Cummins Corporate Office in Columbus, Indiana. “In the lobby, Girard lined the long rectangular ceiling with square-base metal cones which were then smoothly covered in a coat of white plaster. Small bulbs were installed at the tips of the cones, which took on the look of stalactites, regularly and elegantly dripping,” critic Alexandra Lange writes. “The rest of Girard’s lobby design rose from the floor so as not to interfere with the downward sweep of the stalactites.” 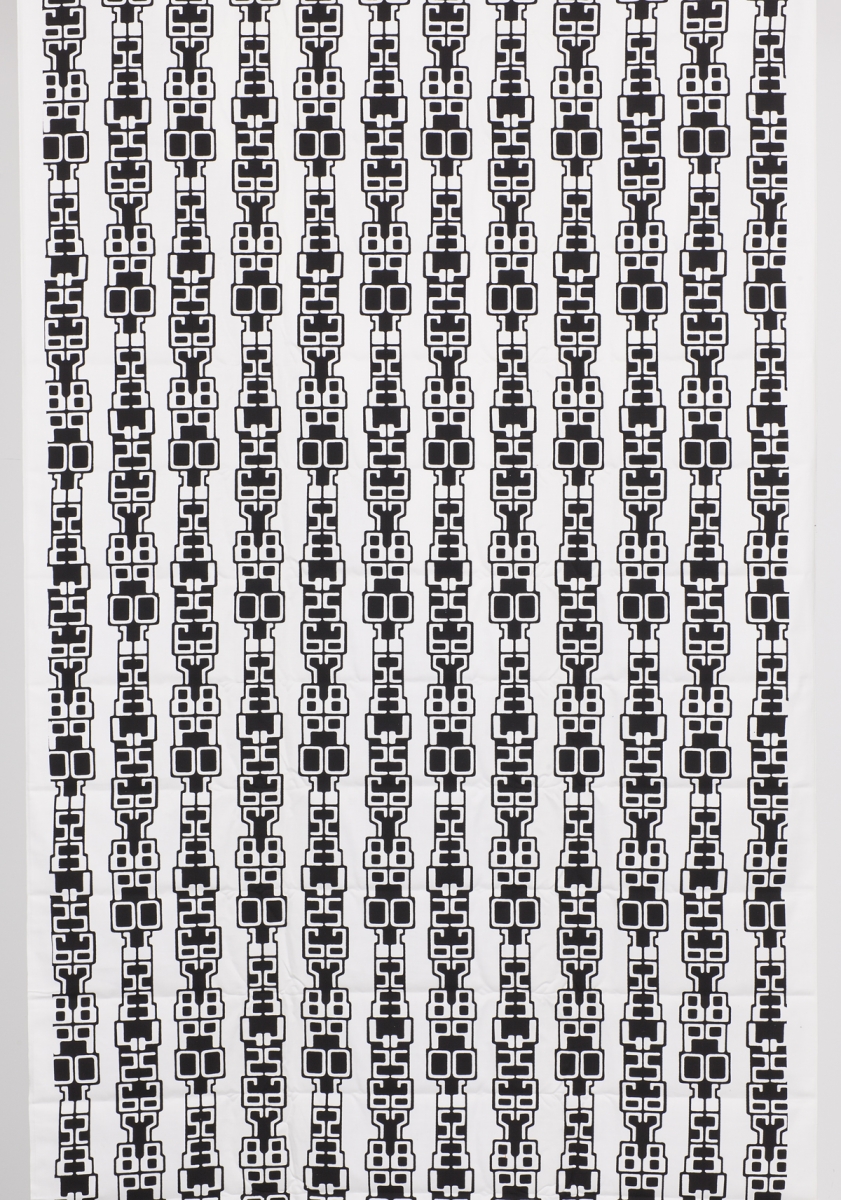 Girard created over 300 textiles for Herman Miller, but by the end of the 1960s, his works “no longer seemed to fit into office spaces which were more likely to be designed by efficiency experts and engineers,” Brown writes. This textile, called Computer, was designed in 1966. In 1972, “Girard stopped providing new designs to Herman Miller and, in large part, stopped designing textiles.” 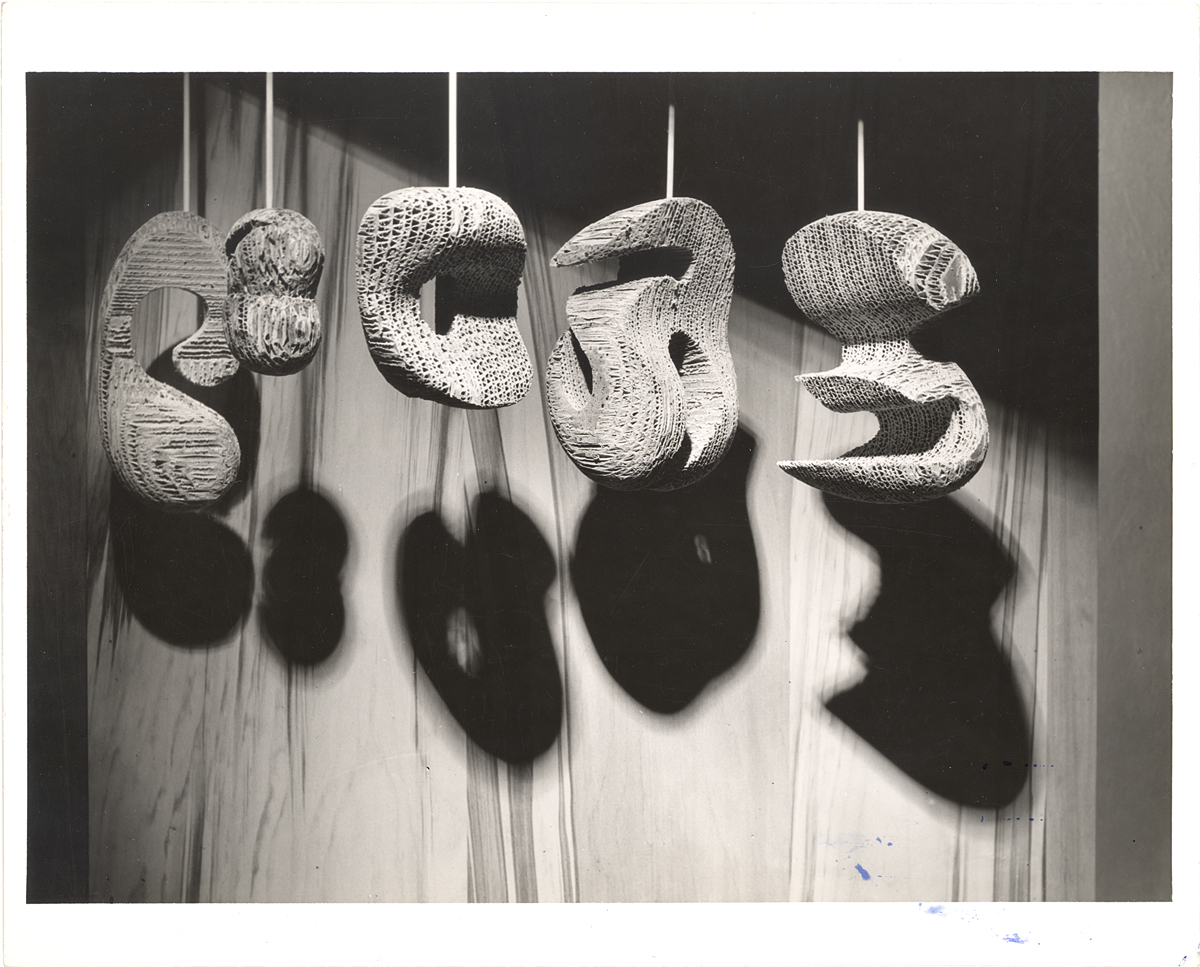 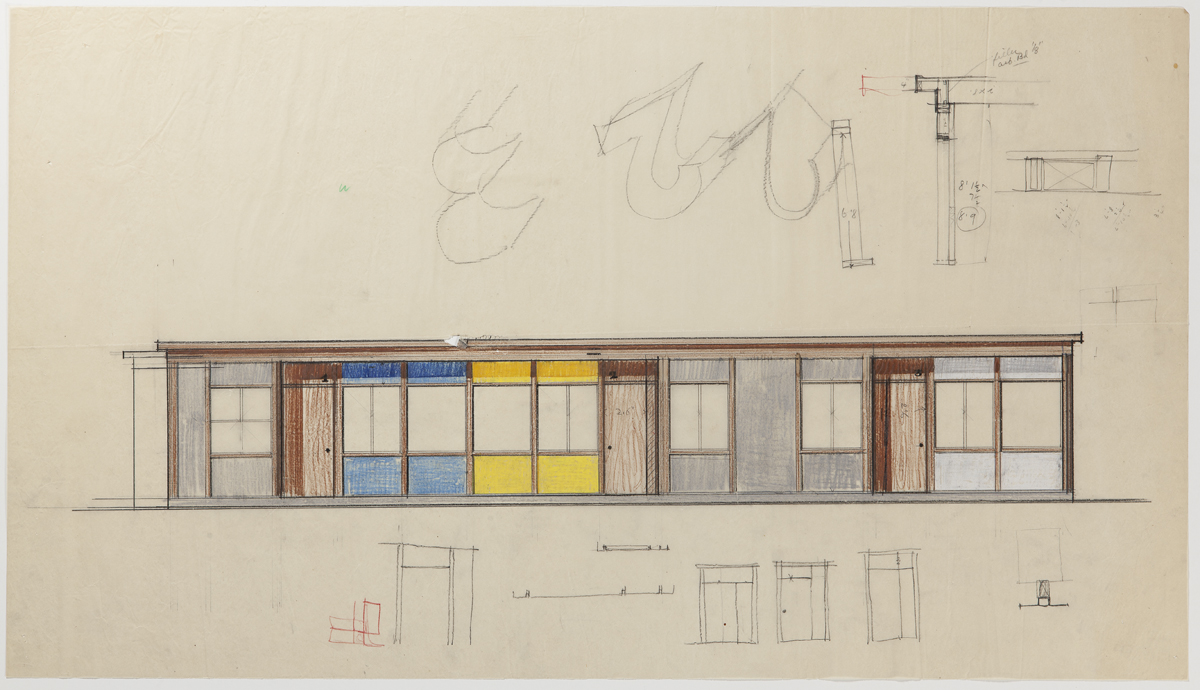 Girard sketched this facade for the Fletcher Motel in Alpena, Michigan, which he designed in 1949 as a group of ten bungalows. The interior wall treatments were matched with the furnishings provided by Knoll. Girard trained at the Architectural Association School of Architecture in London, completing his studies in 1929. 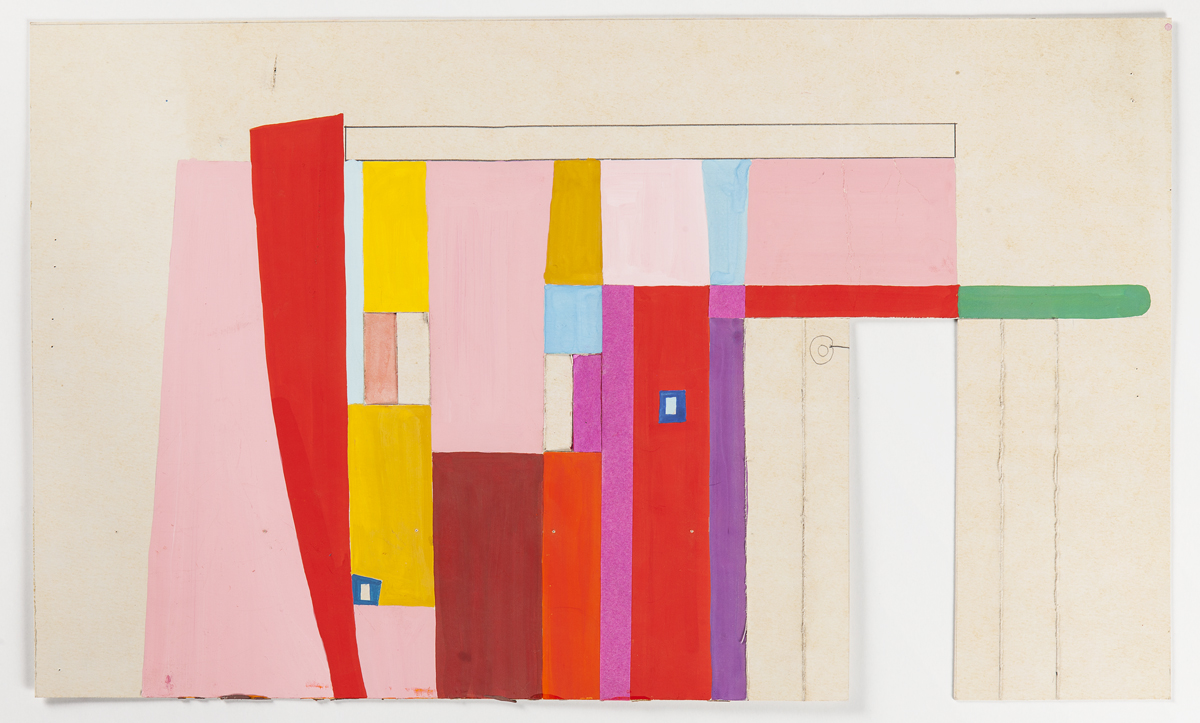 In June 1953, Girard and his wife, Susan, moved to Santa Fe, where they purchased an old, adobe house from the artist Hilaire Hiler. This study in acrylic on paper is for the color scheme of the living room wall. “Girard regarded this house, where he lived for the rest of his life, as a kind of laboratory for living,” says curator Jochen Eisenbrand. 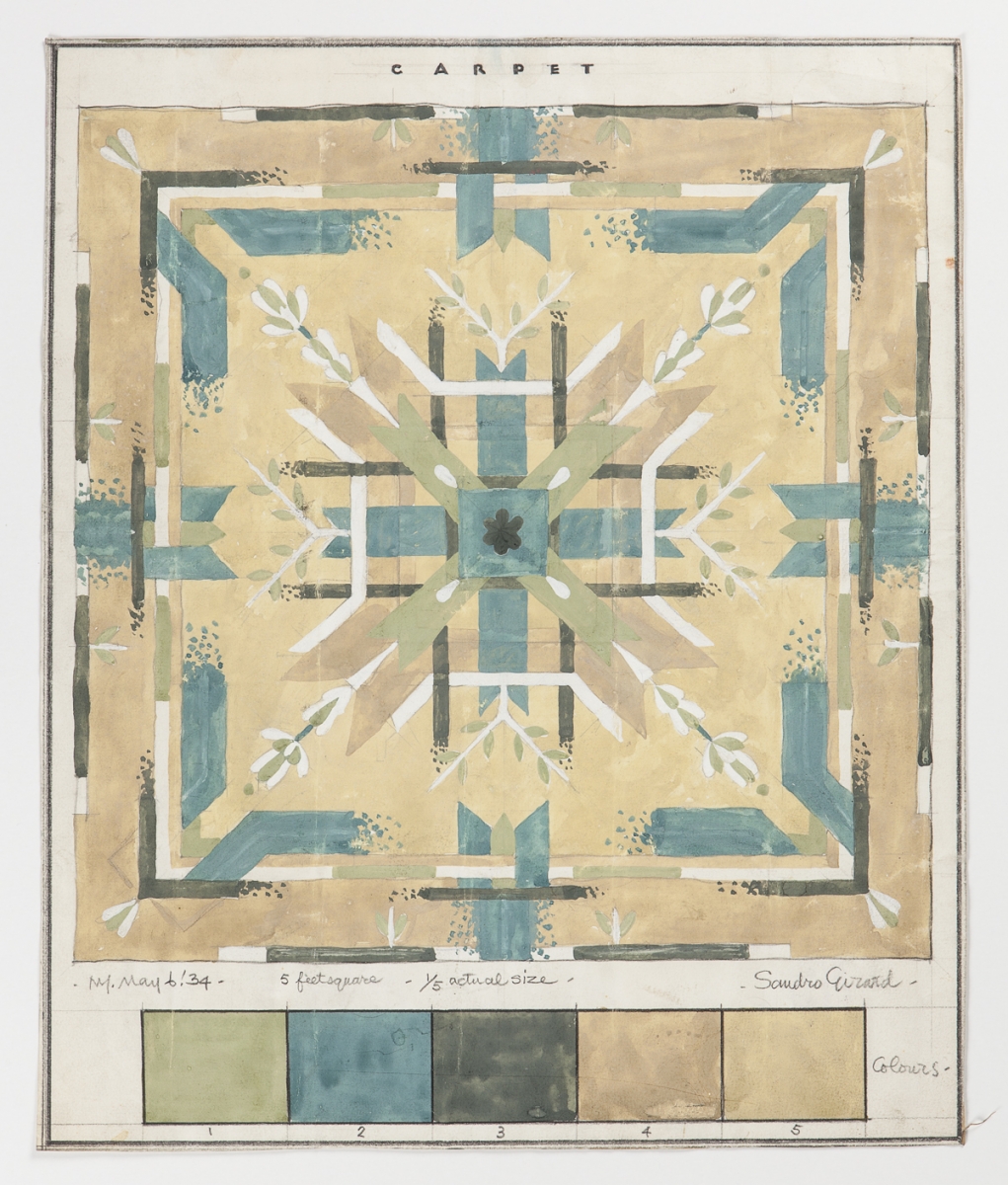 This 1935 drawing was the design for a carpet in Girard’s second New York City residence, at 159 East 70th Street. Spanning two floors of an old brick building, Girard’s home also served as a way of displaying his interior design work to potential customers.“If the drawing room may be said to radiate the subtle qualities of Piero della Francesca,” a reviewer wrote at the time, “then the study expresses the deeper quiet mood suggestive of Luca Signorelli.”

In 1960, Girard, assisted by Susan and associate Michael Hamilton, designed every detail of La Fonda del Sol, a Latin American restaurant in the lobby of the Time & Life Building in Manhattan. “From the plan and architectural elements to the tableware and typefaces, Girard was able to demonstrate his intimate knowledge of Latin American culture,” writes historian Barbara Hauss. The interior architecture was largely neutral and calm; every other element, like the glazed porcelain dishware shown here, came in a variety of shapes and colors. 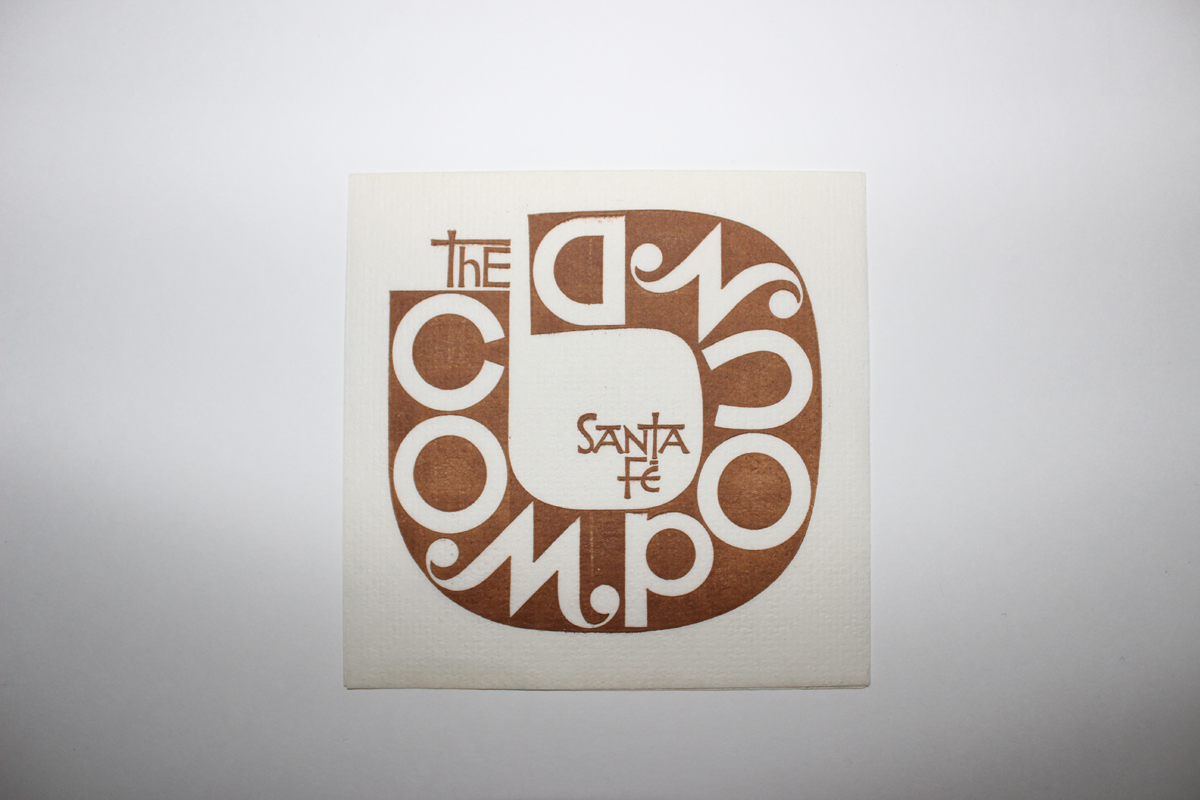 The Compound, a Santa Fe restaurant designed by Girard, opened its doors on July 1, 1966. Inside, he unified the existing structures of the original adobe building that housed the restaurant, but the outside was left largely untouched—except for a simple entrance portal and a logo that he designed with an original typeface. “The Compound is the least known of Alexander Girard’s three major restaurant designs, yet it is the only one that survived past the 1970s,” Hauss writes. 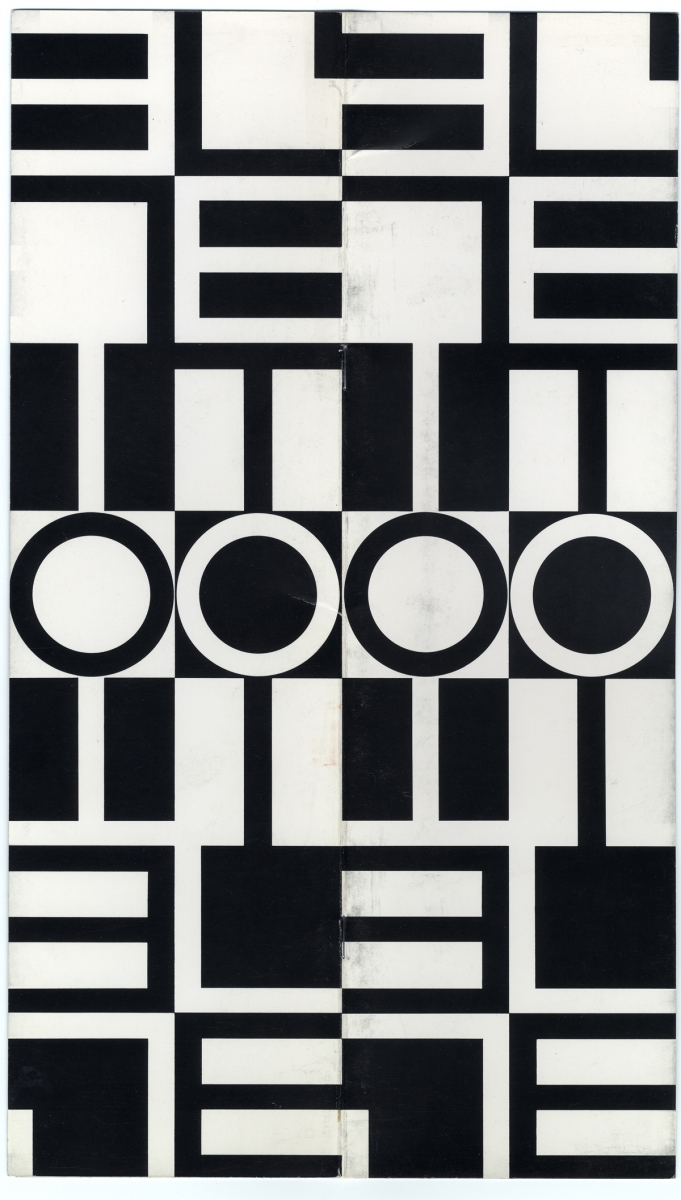 A menu card for L’Etoile, Girard’s second major restaurant, which opened in 1966 in Manhattan’s SherryNetherland Hotel, indicates his genre-defying approach to a French eatery: “There is nothing inherently wrong with [traditional French restaurant interiors],” editor Olga Gueft wrote at the time. “But there comes a point when one chokes.” Girard’s scheme, with mirrors and stylized floral motifs, came as a relief. 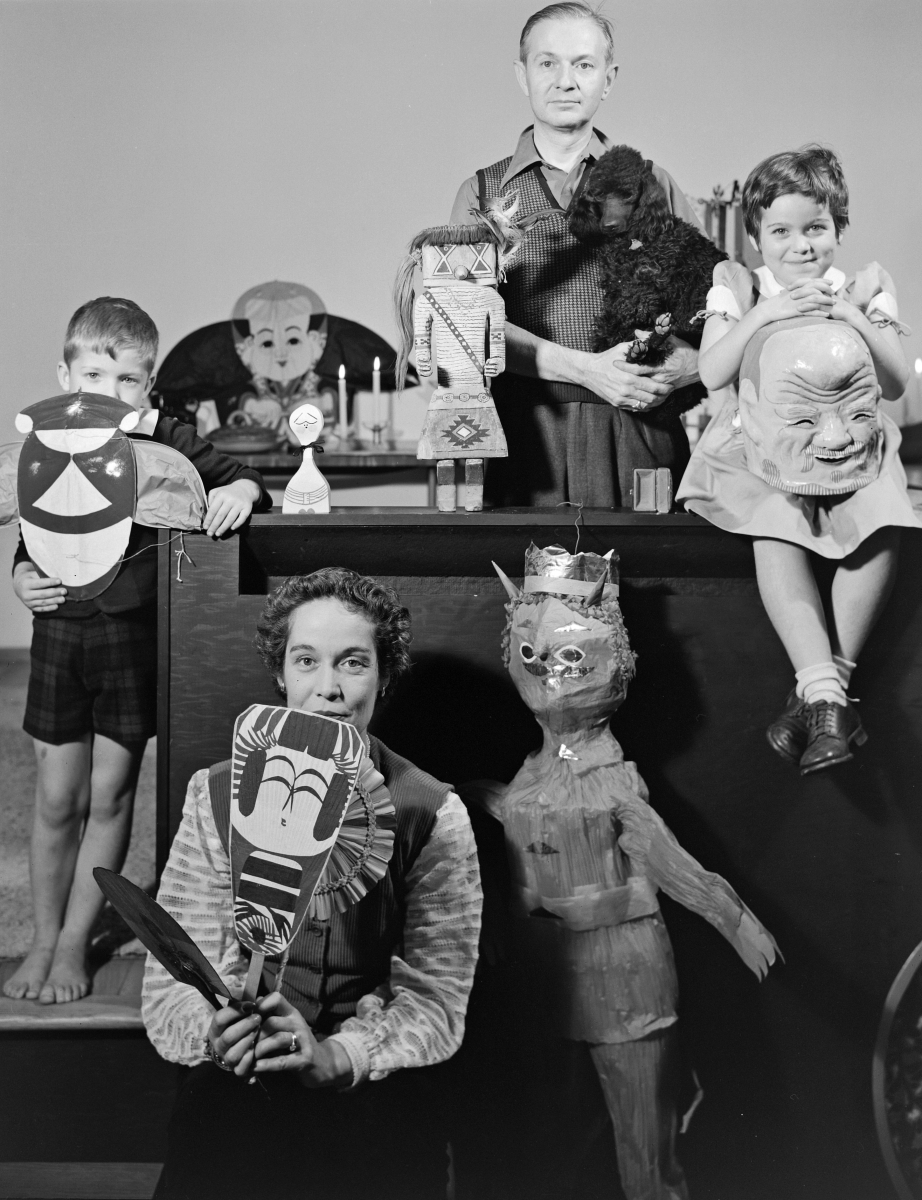