What To Do with Lost Spaces Under NYC’s Bridges, Highways, Subway Tracks?

A study by the Design Trust for Public Space and the Department of Transportation suggests ways to reclaim 7,000 miles in U.S. cities for public use.

Broadway and Flushing Avenue under the elevated JMZ subway line in Brooklyn.

Photo by Krisanne Johnson for the Design Trust for Public Space

This past summer we released a study that recommends the transformation of neglected public spaces beneath New York City’s nearly 700 miles of elevated bridges, highways, subway tracks and rail lines. The Design Trust for Public Space partnered with the NYC Department of Transportation (DOT) on this study in 2013. Together, we discovered millions of square feet beneath and along this massive infrastructure network—most of it outside of Manhattan.

Under the Elevated: Reclaiming Space, Connecting Communities took into consideration innovation, versatility, and environmental sustainability. Ideas focus on creating attractive, less noisy, well-lit and maintained spaces. Our goal is to maximize public use of  “el-spaces,” as we call them, while re-knitting these spaces back into the urban fabric. With vast areas and infrastructure to maintain, we feel that there’s an opportunity to develop new stewardship and concession models as well.

What would be some of the new uses or activities for our neglected spaces?  We think an electrical vehicle charging station under the Queensboro Bridge would work, as would studios or workspaces that perform noisy activities; in Highbridge Park, outdoor training facilities; food trucks or bioswales for capturing stormwater below the Gowanus Expressway and more.

In addition, el-space upgrades in low and moderate-income neighborhoods, such as Brooklyn’s East New York, could boost business and quality-of-life for affordable housing developments planned for the area within the next ten years.

We also propose creating the El-Space Program within the NYC DOT to streamline permitting as well as design and construction review processes.  Capitalizing on the special character of these el-space sites as gateways, corridors, and connectors in underserved neighborhoods, DOT is conducting further investigation.  The agency is surveying el spaces citywide to create an asset inventory, and pursuing pilot lighting treatments along the elevated #3 train structure on Livonia Avenue in Brownsville.  Inspired by the Under the Elevated pop-up Boogie Down Booth, DOT is also working on a new street furniture prototype that will feature seating, lighting, music and concession stand facilities. 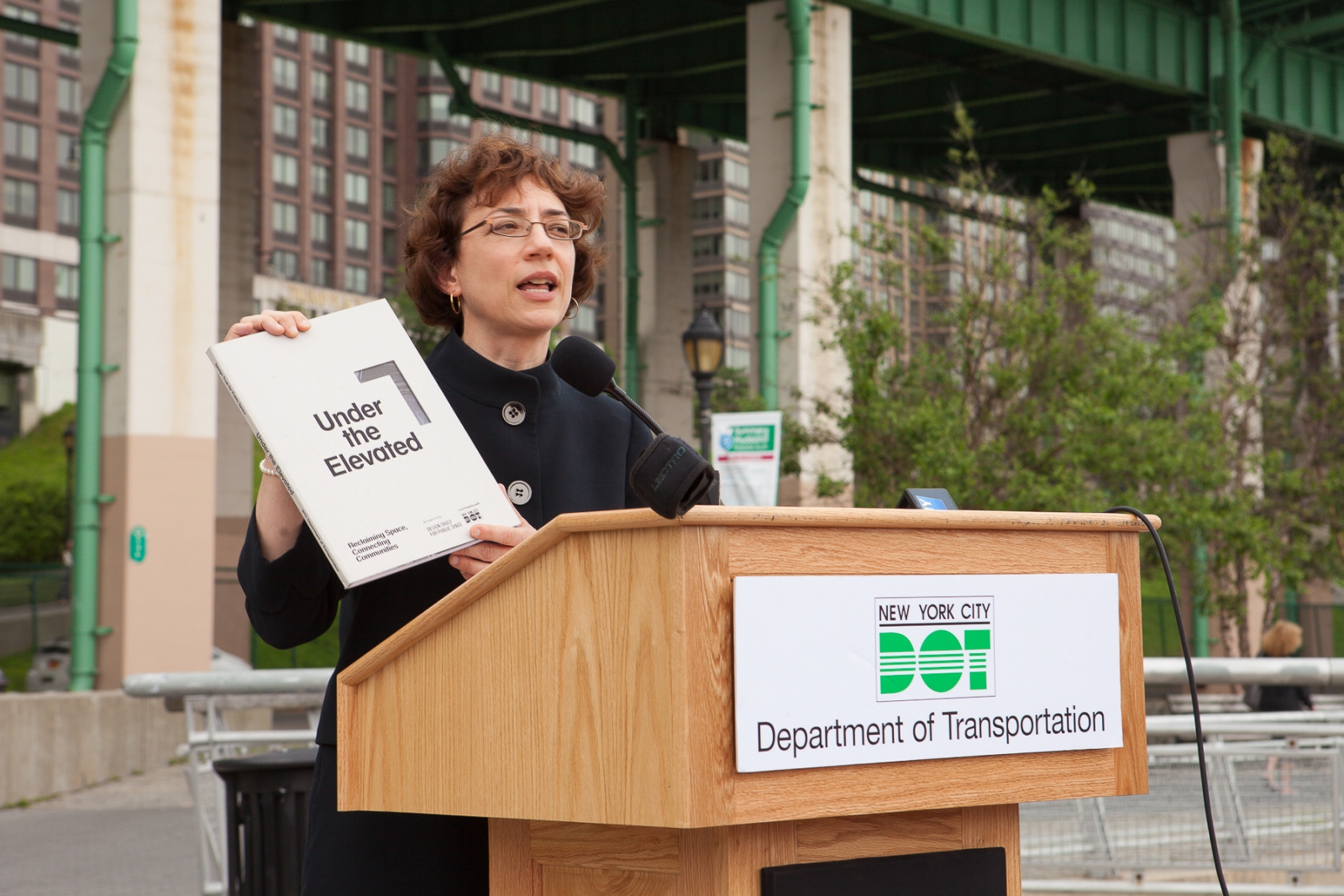 NYC Department of Transportation Commissioner Polly Trottenberg presents the Under the Elevated study on June 18, 2015, at Pier i Cafe.

Photo by Sam Lahoz. Courtesy of the Design Trust for Public Space

Recently the Under the Elevated project team gathered at the offices and rooftop of BuroHappold, the engineering firm that served as our  technical advisor; they presented their perspectives on the vast number of opportunities that el-spaces hold for the future of NYC and in cities globally.

What follows is adapted from a public conversation with the Design Trust Fellows who worked on the Under the Elevated study.  Neil Donnelly, Graphic Design Fellow; Susannah Drake, Urban Design Fellow; Chat Travieso, Participatory Design Fellow; and Douglas Woodward, Policy Fellow, answered questions from the audience at this forum.

How much involvement did the community have in your design and the implementation?

Chat Travieso:  We pinned down the specific needs of each neighborhood through workshops with residents, as well as talking to community organizations, such as the Women’s Housing and Economic Development Corporation, the Bronx Music Heritage Center, the Southern Boulevard Merchant Association, and Chinatown Partnership.  The result was two pop-up installations to test various design strategies for revitalization in Southern Bronx and Chinatown.

One of the great things about speaking with multiple organizations was that they already had huge working knowledge.  I was able to talk to many people who knew a lot about the issues and what things needed to be improved.

For example, there is a lot of community support for improving Southern Boulevard in Bronx but, I learned, the mile long stretch from the Simpson Street stop to 174th Street is right outside of the business improvement district. We kept asking how we could both celebrate the specificity of the site and the people who live there, but at the same time deal with the real issues.

So, we strategically placed our pop-up installation, called Boogie Down Booth, at the heart of that excluded zone. The Booth included seating, LED lighting, and directional speakers that played Bronx music celebrating the artistic history of the neighborhood. Everything was powered by solar panels. 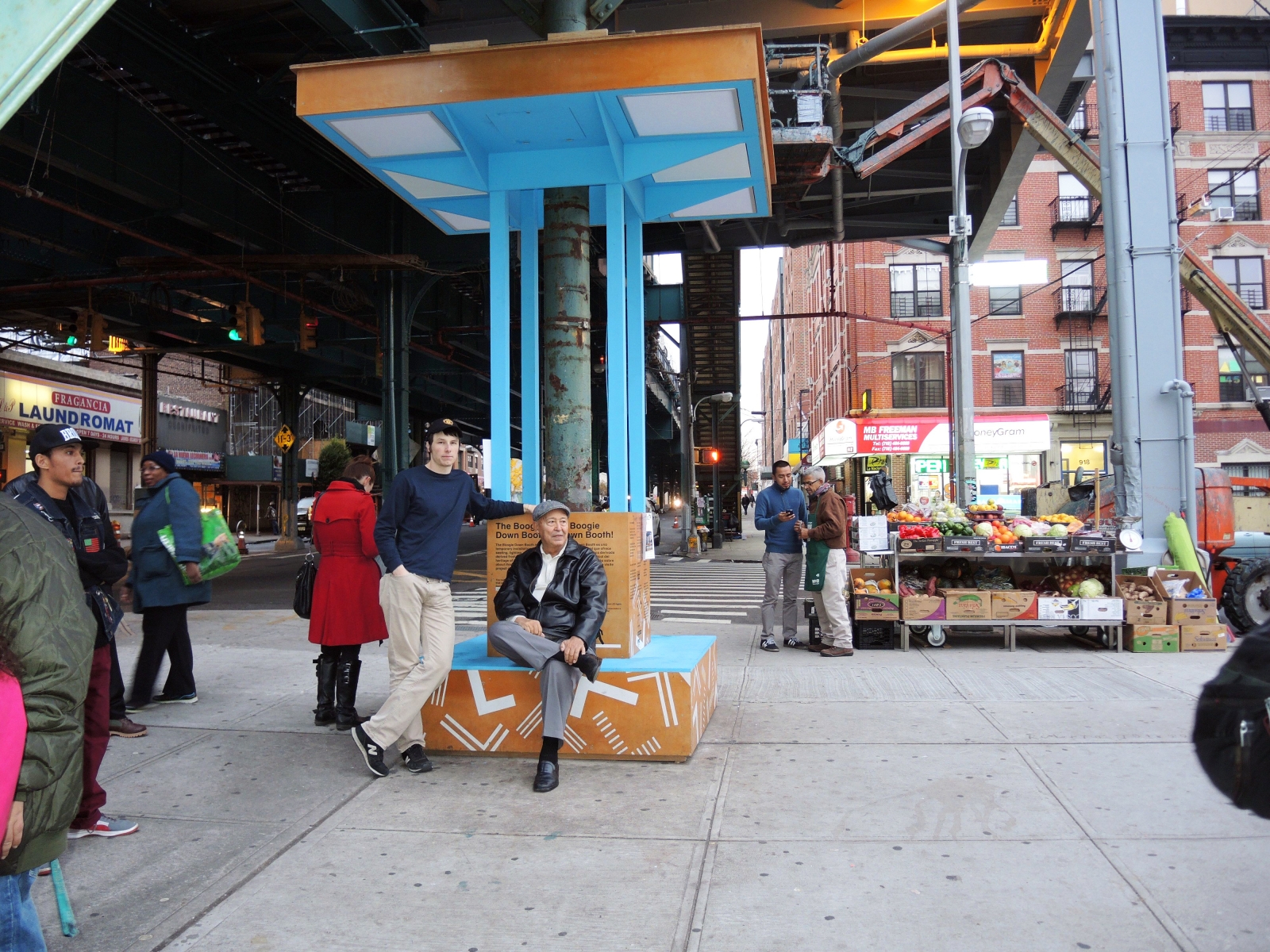 The Boogie Down Booth temporary installation underneath elevated subway tracks at Freeman Street and Southern Boulevard in Bronx.

Photo by Rucha Mandlik. Courtesy of the Design Trust for Public Space

Neil Donnelly:  Many of the design ideas actually came directly from suggestions from the community. One such idea was to use lighting in the Boogie Down Booth installation.  A lot of the merchants along Southern Boulevard told us that they had to close around 4:30 in the afternoon during the winter because there isn’t enough lighting under there.  So that’s a lot of revenue lost from the businesses right in the prime time of shopping season.

Who owns this large network of elevated structures?

Douglas Woodward:  These structures are usually under multiple jurisdictions. For example, the MTA will own the track above, the NYC Department of Transportation (DOT) has the columns coming down, and sometimes NYC Parks is involved. It’s really hard to get everything done when you have two or three different agencies involved. Everybody stops at their line and says it’s somebody else’s problem. So it’s really a civic issue that goes to our governments.

Were there any particularly big ideas that inspired you in your research?

Susannah Drake: We did a GIS (geographic information system) analysis across the country, and there are over 7,000 miles of under-the-elevated spaces. This is huge. If the strategies we recommend in the study are expanded on a broad scale, it can make a big difference.

When we were doing our research, we spoke with a lot of community groups who are already doing great things. The guiding idea for us was to be very inclusive, to bring all of those groups in and show what could be done.

What would be your advice for community groups trying to activate the under-the-elevated spaces near them?

Douglas Woodward:  There’s actually a process, the El-Space Program, laid out by DOT that they’re now refining.  Our study galvanized a lot more interest in this.