It took years of development—and some judicious design decisions—before DXV by American Standard was able to make a breakthrough in manufacturing with its premium line of 3D-printed faucets. 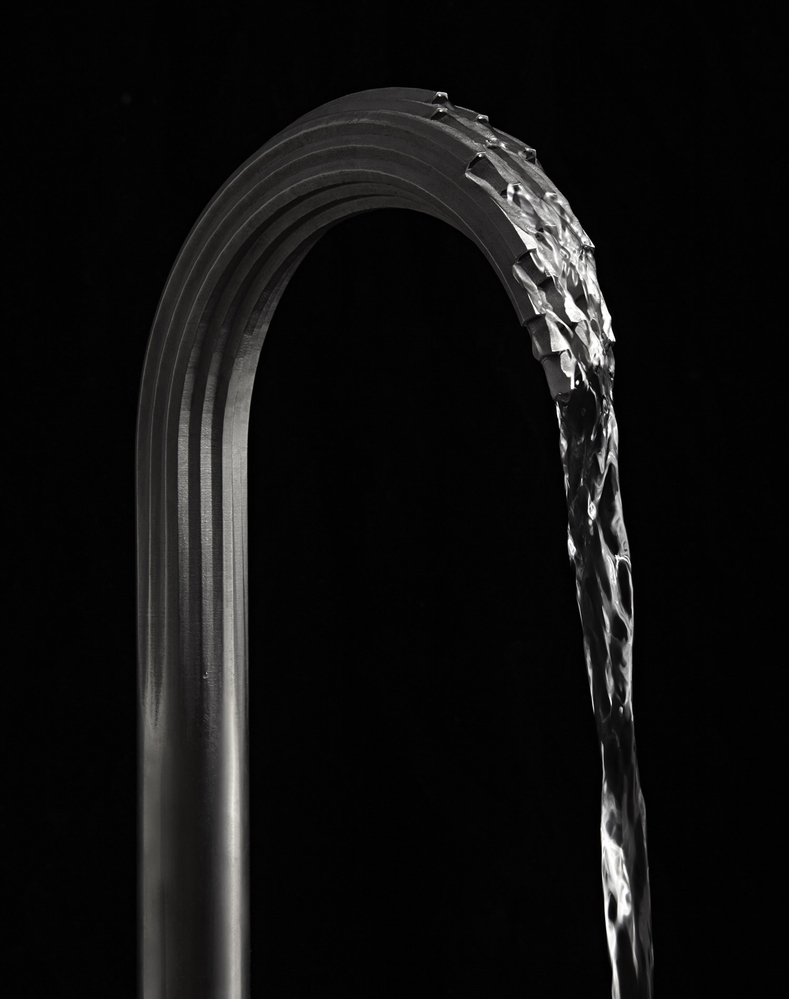 The Shadowbrook, which channels water through many individual pipes, is one of three designs in a collection of 3D-printed faucets.

Infrastructure is often as invisible as it is vital. Plumbing provides a paradigmatic example—before breakdown makes it urgently apparent, it remains hidden from consciousness. (Flint, Michigan, is tragically illustrative.) A vast network of waterways, pumps, pipes, treatment plants, administrators, and regulations all lead to a couple of valves and a spout in our kitchen or bathroom. All we know is the terminal; the rest we take for granted.

It is perhaps to remind us of the miracle of water that the design team at American Standard developed a new set of faucets, putting to use 3D-metal-printing technology. A first in the residential market, this feat marks a new phase in the company’s mission to “raise the standard” for the industry. Curious, I met with Jean-Jacques L’Henaff, vice president of design for the brand, to take a tour of his studio and experience these innovations firsthand.

The faucets are indeed striking. In Shadowbrook, for example, a bundle of hexagonal tubules with staggered terminations blooms with grace, letting out a babbling stream as if the natural waterways and the artificial waterworks didn’t quite come together in time before arriving at the sink. “We wanted to capture the experience of water,” says research and development engineer Sara Salahi as we gather around plastic prototypes. It is a lofty design brief, but only the beginning of a long exploration into 3D metal printing.

From Provocations to Prototypes

In 2013, at a time when the company was losing market share, Jay Gould came on as CEO and implemented a rescue strategy focusing on manufacturing and engineering. The 3D-printing project was initiated in this context: Could a faucet be printed in metal? What sort of effect would this production scheme have on development cycles and inventory management? What kind of customer-engagement opportunities could come from the ability to customize products rapidly? 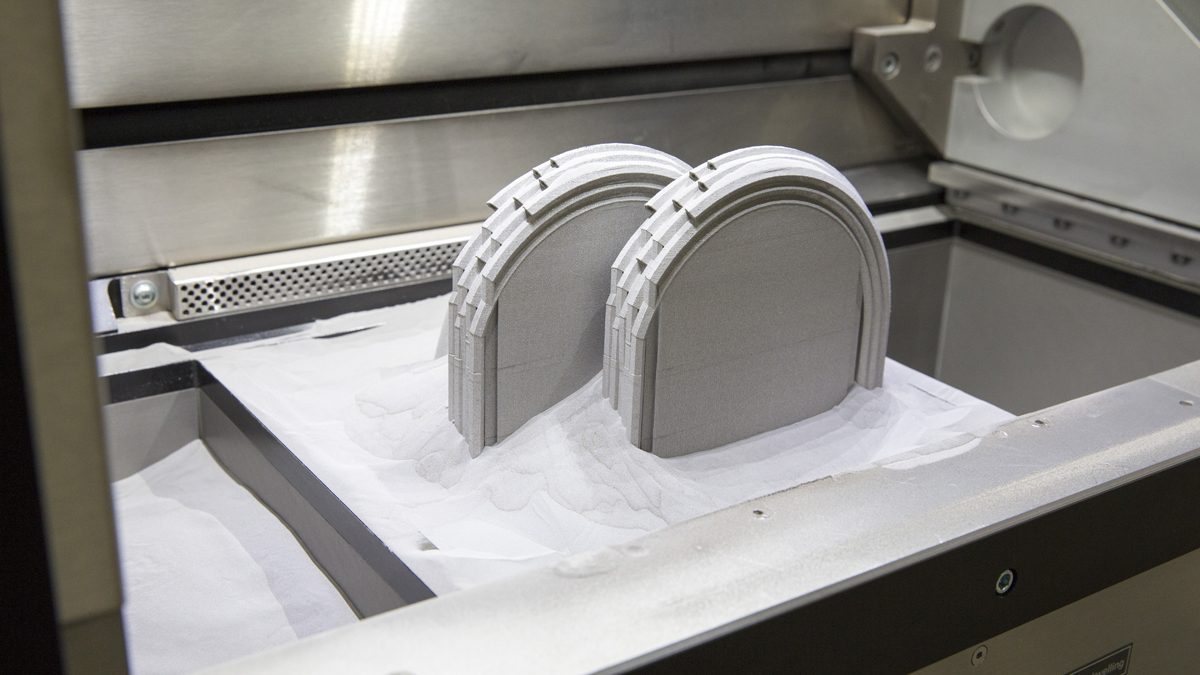 For L’Henaff, exploring the process also presented an opportunity to understand novel production methods ahead of the rest of the industry. “Additive manufacturing [a generic catchall for 3D printing] is here to stay and will only become more common in design and construction,” he says. “American Standard has chosen not to be a bystander, but rather to be a leader in this paradigm shift.” In theory, these production methods are much less severely affected by economies of scale: Up-front costs are orders of magnitude lower while the setup time per part stays approximately the same, rendering obsolete the large production volumes that are typical in industrial manufacturing. There is also the considerable benefit of being able to put new designs into production very quickly, with no new molds or machine setups required. In other words, for low-volume runs, additive manufacturing promises to take a product from sketch to object faster, cheaper, and leaner. As such, 3D printing is often lauded as a harbinger of a new, digital-material revolution.

For L’Henaff and his team, however, the challenges of bringing a commercially viable 3D-printed faucet to market remained immense. Originally developed for the production of precision components in aerospace and medical industries, the process known as direct metal laser sintering (DMLS) differs from the more common, filament-based printing with thermoplastics. Here, a very shallow layer of metal powder is spread over the entire printing bed, while a high-power laser fuses the powder into a thin cross-sectional slice of the part. The bed lowers by the thickness of one layer, another layer of powder is swept over the bed, and another cross section is sintered to what’s below. At 40 microns per sweep, it takes about 200 hours to print three to five faucets, depending on the model. To make matters more complex, the heat generated by the sintering process creates tension that can lead to deformed parts. “Additive manufacturing might liberate form,” L’Henaff tells me, “but material constraints remain.”

While the design team explored what was possible with 3D-printed metal, American Standard began to undergo a period of organizational restructuring, and the initiative was put on hold. “Experimental projects are usually at the whim of large corporations, but we found ways to keep working and developing ‘underground,’” he says with a wry wink, declining to elaborate. Work continued in secret, eventually leading to an unveiling of three prototypes at a press event in 2015. L’Henaff recalls the reaction of the audience: “When we turned on the water, there was a quiet but perceptible gasp.” 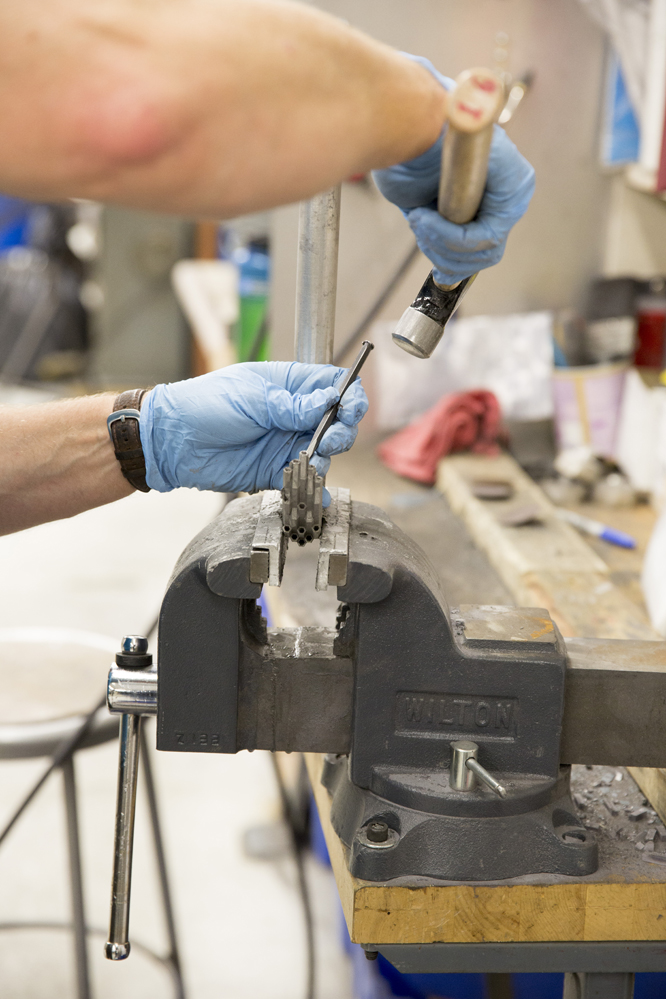 After the printing process, each faucet receives a manual “butler finish,” named after the soft patina that antique silver cutlery acquires after years of use and polishing. Not all traces of the print are removed, however—so it is possible to discern all the processes that go into making the faucets.

Taking It to Market

“These faucets are very expensive,” L’Henaff tells me with guilty pride. I take an outrageous guess at the price, but come up low; suffice it to say, these faucets are not for everyone. Indeed, once the production concept was proofed, design and marketing worked in tandem to develop what they realized would have to be a luxury product. “It’s no accident these faucets fit so well in our high-end DXV line,” I’m told by Margaret Monteleone, product marketing director. “This was always the intent.” The team decided to fabricate rarity—each model series would be limited to 99 units—and to dress each faucet in the mystique of the artisan; all units are manually buffed by an anonymous jewelry maker. Each faucet is printed to order only, delivering on the promise of minimal inventory, although other advantages of 3D printing turned out to be harder to exploit. When I ask how customizable the pieces are, it turns out that isn’t viable at the moment, given the price tag and the agile mode of production.

As L’Henaff walks me out of the studio we pause by a glass display containing the faucets. He points out that the final, manual “butler finish” step is applied only to perimeter surfaces, leaving evident traces of sandblasting and layered sintering on the interior. “It was important for us to let the process show in the finished product,” L’Henaff remarks poetically. I squint to blur my vision, to look at and through these meticulously modeled and crafted, techno-futurist infrastructure terminals. From computer to machine to hand to glass display case—if rarefied experience is the new luxury, it is processes, not objects, that stand on pedestals. 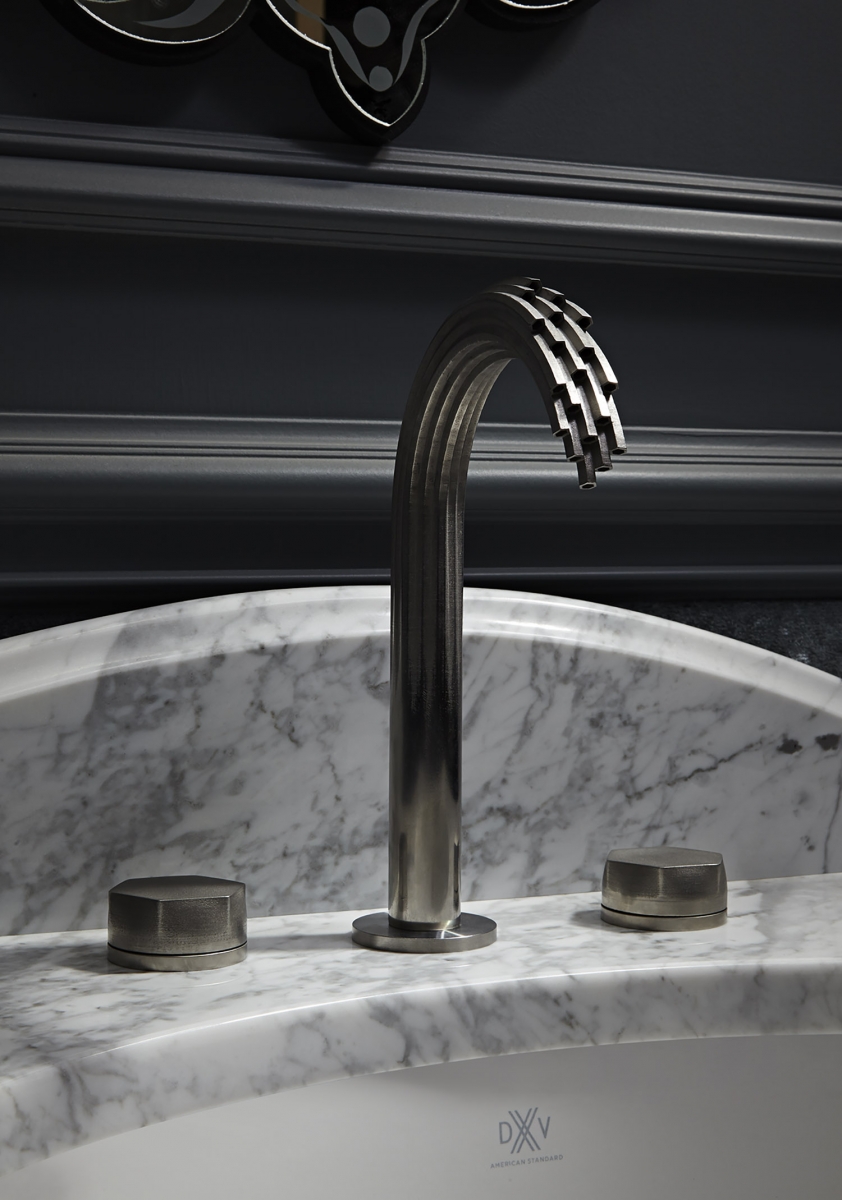 Available in select showrooms now, the Shadowbrook (shown here) retails at $18,000, the Trope at $17,000, and the Vibrato at $19,500, so these faucets are less utilitarian plumbing and more in the nature of prized possessions.