After years of Development, OLEDs are poised to transform lighting design. 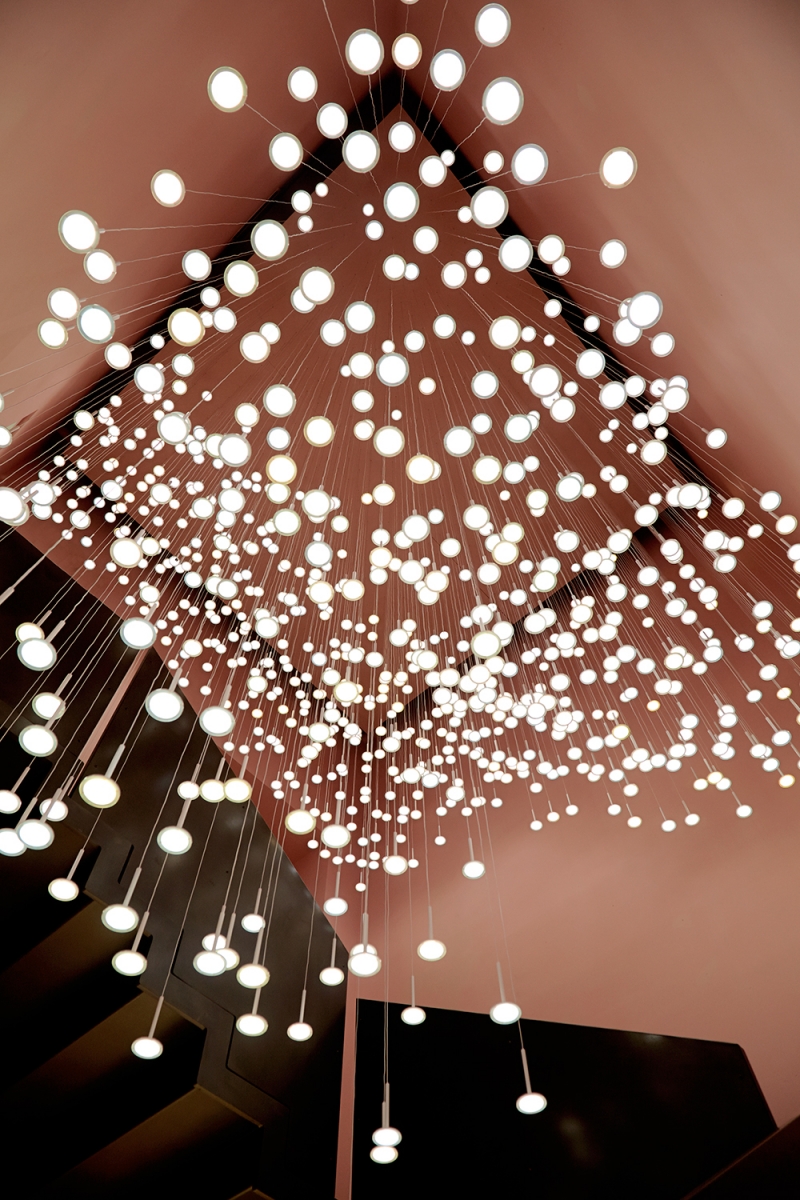 The I.Rain fixture, designed by Thierry Gaugain, descends from the ceiling of the new Blackbody showroom in New York, the first OLED store in the world. The company’s founders, Bruno Dussert-Vidalet and Alessandro Dolcetta, put together a team of 13 engineers and researchers devoted to advancing OLED technology.

“How have we always thought about a light ﬁxture?” asks Peter Ngai, vice president of research and development at Acuity Brands Lighting. “You make something hot and bright, and you put it on the ceiling. When we screw in a light bulb, the ﬁrst thing we do is ﬁnd a shade. Why? You have to diffuse the light, and maybe you have to ﬁgure out how to get rid of the extra heat.”

Ngai says that somewhat primitive approach could soon change radically. The reason? Organic light-emitting diodes, or OLEDs: Think of them as a two-dimensional light surface, rather than a directional light source. OLEDs emit light from a layer of electroluminescent material that is just a few nanometers thick (200 times smaller than a human hair). Unlike the classic hot, bright ceiling ﬁxtures of the past, they discharge light already diffuse and low-heat. This allows them to be ﬂat, lightweight, and ﬂexible; and, depending on the top layer and substrate material, they can also be transparent. “Instead of a point source, it’s an area source,” says Ngai, who runs the Acuity Lab in Berkeley, California. “It emits light over a large surface—say, two by two inches, or eight by eight inches.” Taken together, all these properties have profound implications for architectural lighting.

OLEDs aren’t new. They were developed in 1978 at the Eastman Kodak Company, based on a phenomenon called electroluminescence, which was discovered in the 1950s. (LEDs are based on slightly older research; the ﬁrst LED was created in Russia in 1927.) OLEDs create light by applying voltage to an organic (carbon-containing) compound sandwiched between a substrate and a transparent top layer. So, why is this technology poised to break out now? First of all, manufacturing techniques are improving, making cost-effectiveness an attainable goal. Thinner and more ﬂexible substrates recently have been developed. A technique called thin-ﬁlm encapsulation will further reduce thickness, allowing for lowered manufacturing costs and greater ﬂexibility. Transparent electrode materials could make it possible for OLED tiles to serve as both windows and light ﬁxtures. And with their diffused illumination, they’re also suitable for larger areas. The result is a new type of ﬂat light source that’s fundamentally different from anything before it. 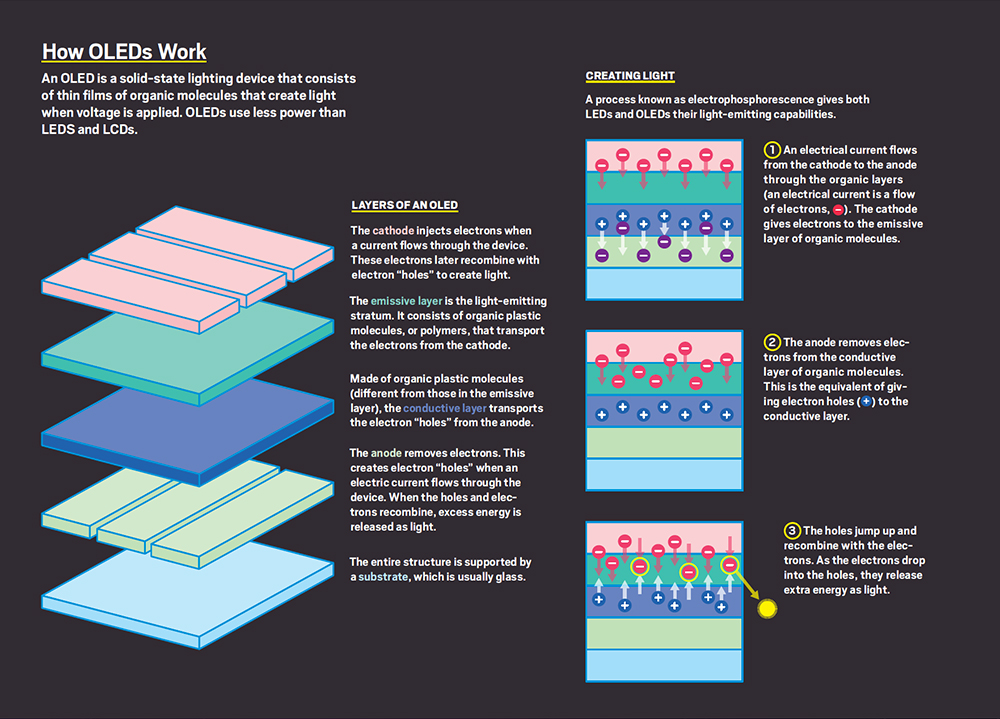 OLEDs share a lot of the advantages that made LED lighting, which had its ﬁrst commercial application in 1968, so exciting. LEDs consume far less power and generate less heat than incandescent lighting, and don’t contain toxic substances like ﬂuorescents do. But while an LED, depending on lumens, can get very hot, OLEDs are low-heat and can emanate low-intensity light from a larger area. LEDs, which not too long ago looked poised to take over lighting, are slowly losing their edge, and are in danger of becoming outmoded. “LED has greater energy efﬁciency mainly because it’s a more mature technology,” Ngai explains. “But OLED technology is catching up. In three years, the difference will be relatively small.”

OLEDs are already widely used for screens and displays, an application that has contributed to the reﬁnement of their other strengths: small size and ﬂexibility. The extremely thin light-emitting layer adds to their vast design potential. Nancy Clanton, founder and president of Clanton and Associates, says past development work on LEDs will help OLEDs progress faster, since some advances apply to both technologies, adding, “The organics have way surpassed where LEDs were at this point in their development.” For years after they were ﬁrst introduced, she recalls, LEDs were inefﬁcient and expensive. “It’s like any new technology; it’s going to start with tiny baby steps.”

Clanton, a former classmate of Ngai’s, worked on the installation of Winona Lighting’s Trilia OLED Luminaire at the U.S. embassy in Helsinki, Finland—the ﬁrst major project where OLED lighting has been used to illuminate an entire room. “What OLEDs will do is, we’re going to start incorporating this technology into our surfaces,” Clanton says, adding that ﬂexibility and customization are key elements of satisfaction for lighting ofﬁces. The unique properties of OLEDs, Clanton says, give them immense potential in those areas. “Our desks may glow, our walls may glow,” she says. “Imagine these luminous, ﬂexible tiles, and you can shape them into circles and waves, you can do whatever you want with them. OLEDs could be incorporated into glazing materials, so that the illumination for your space can be a part of your windows and skylights. We’ve seen elements designed so that that when you turn them off, you can see right through them.” 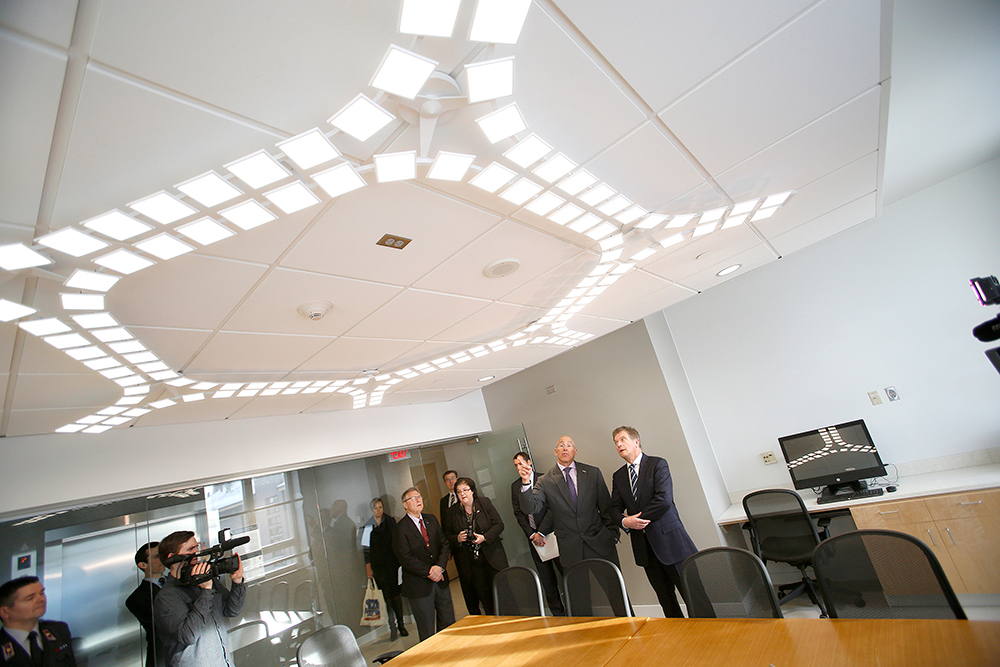 The Innovation Center at the U.S. embassy in Helsinki was a renovation of a historic building, designed to showcase the most advanced energy technologies. Winona Lighting’s OLED Trilia Luminaire was the first OLED fixture to serve as the main lighting source for an entire room in a major public architecture project.

There are still some challenges. Like any prototype, the tiles used to create the Trilia Luminaire had some reliability issues. “We don’t know how long they’re supposed to last, but a few months is not acceptable, obviously,” she laughs. “And the light-emitting compound has to be kept sealed. If it’s exposed to oxygen, it stops working.” These problems need to be addressed before OLEDs can be mass-produced. Clanton says that mass production would make OLEDs cheaper, adding, “Once they’ve solved that, designers are going to go crazy with them. At this point, they’re expensive, but once you put them in they are absolutely magical.”

Ngai maintains that for certain applications, where the desired effect is soft lighting, OLEDs already have the edge. “The visual effect is very different,” he says. “With LEDs you have an intense source, while OLEDs emit light that has a calming effect. To get that effect with an LED, you need reﬂection and diffusion material, and other design accessories to produce it.” More materials, in turn, mean more waste. “So, from a sustainability viewpoint, LEDs aren’t that far ahead.”

But don’t tear out your old ceiling ﬁxtures just yet, cautions James Benya, a founder of Benya Burnett Consultancy, a lighting ﬁrm that specializes in sustainability and green design. “I spoke at an OLED convention in Boston in 2009 and everyone kind of agreed that OLEDs are 10 years out, and I don’t think that timeline has changed,” he says. “Everybody is excited about them. They have great promise and, yeah, when it becomes practical and low cost, I would expect a revolution.”

Benya insists that several obstacles have to be cleared before that happens: “The big issues today are sustainability and efﬁciency. That’s at the top of everybody’s list. For OLEDs to be effective as a solution, they have to be similar in efﬁciency with LEDs. And that will happen. Their problem is getting the efﬁciency ratings up and the cost down. If it’s too expensive and inefﬁcient, it will become a dead technology.”

Still, he concedes, “OLEDs have amazing potential. We don’t know yet all that it can do. If you were to look back ten years ago at LEDs, they were ridiculously expensive and inefﬁcient. And OLED technology doesn’t seem to have the same problems that LEDs do. There are some color problems, but that’s going to be worked out, and the only way that an emerging technology like this gets to be perfected is if there’s a demand for it.” Examples of possible early markets include decorative lighting and projects that showcase new technology, such as the Helsinki project. Further down the line, General Electric, Philips, Konica Minolta, and other big ﬁrms are developing OLED versions of traditional lighting applications like desk lamps for the retail market. 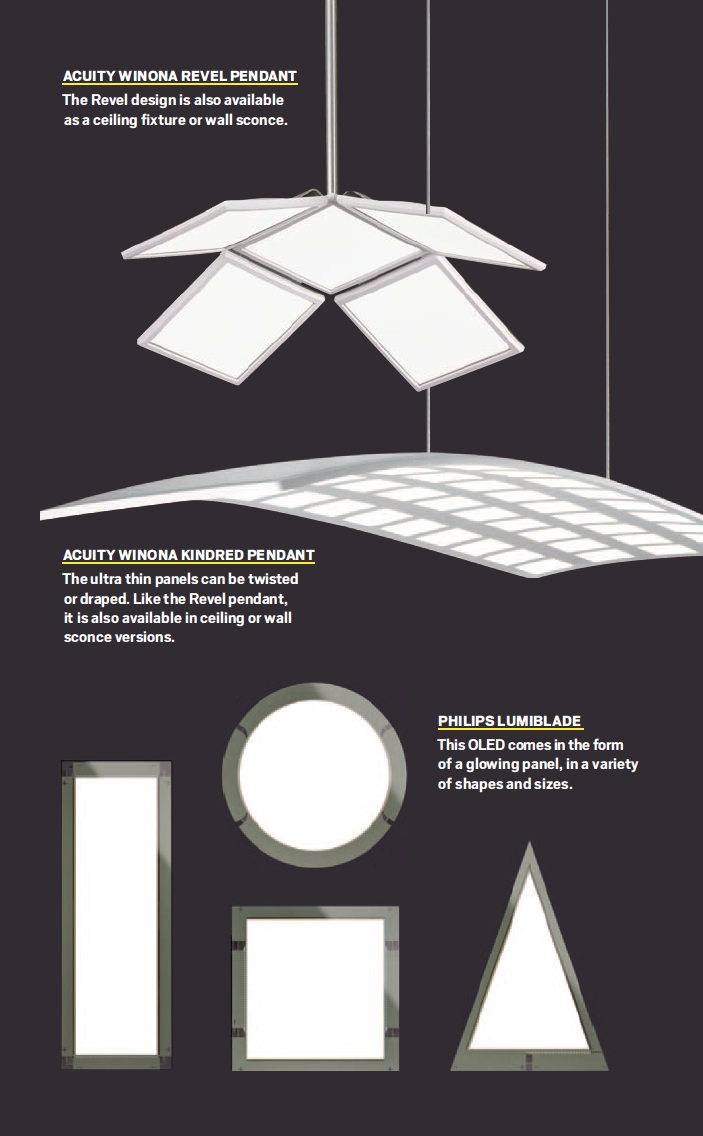 Benya says that the more traditional LEDs are used, the more their shortcomings are revealed, leaving a gap OLEDs could be ideally positioned to ﬁll. “LEDs tend to ﬂicker,” he says. “And their spectrum is a little odd. They put out too much blue light. There is a lot of research supporting the conclusion that the spectrum between 420 and 450 nanometers is likely to cause macular degeneration.” In other words, prolonged exposure to LED lighting can damage your eyes, and studies suggest that the effect is more pronounced in young people.

That same problematic spectrum, Benya says, puts traditional LEDs at a disadvantage for use in outdoor lighting—a potentially serious problem when their long life and high efﬁciency have made them common for public applications. “It’s clear that this blue spectrum has an effect on the human circadian response curve. LEDs at night are more likely to affect your circadian system in a disruptive way.” With OLED lighting, Benya doesn’t foresee the same problem, since the desired spectrum of light can be obtained by controlling the chemical makeup of the light-producing organic compound.

Ngai predicts OLEDs will become cost-effective in three years for mainstream applications, and the U.S. Department of Energy projections show OLEDs reaching 10,000 lumens per square meter—close to outdoor light levels, and more illumination than necessary for most indoor tasks—by 2015. That’s good news because, as Ngai reminds us, older technologies had a certain amount of waste built in. “We can ﬁnally move past the idea of lighting a big space with a big, hot, metal box that we stick on the ceiling. If your ﬁxture is way up there, you need a lot more lumens to illuminate your room.”

Instead, Ngai asks us to imagine a future where lights are precisely as bright as they need to be. That may sound like a minor adjustment, but he predicts that this small tweak will change our entire relationship to artiﬁcial lighting. “Think about it this way,” he says. “Twenty or thirty years ago, a telephone was that black thing that sat on top of a desk. But now, what’s a phone? You hold it in your hand. You take it anywhere. There’s an emotional connection. The same thing can happen with light.”

OLEDs, Ngai says, can provide the bright indoor lighting we need, or they can create soft illumination that has more in common with moonlight, ﬁreﬂies, and candlelight than with the hard, distant brightness of the noonday sun. A future OLED-lit ofﬁce might have windows and skylights that transform into light ﬁxtures at night, luminescent walls and desks, and workspaces with customized light levels optimized for different tasks and work styles. “Whenever we show people our OLED projects, the ﬁrst thing they want to do is touch the light,” he says. “That’s where OLED has a lot of promise. It invites us to bring the light closer. And with the light closer, you need less power to illuminate. It’s a simple, pure, and honest type of light source.”