Charles Dickens’ 200th birthday is coming up soon and already, in England, they’re a bit sick of him and all the fuss, says Janine Pollock, head of the Rare Book Department at the Free Library of Philadelphia. But that didn’t stop a British museum curator from asking her if they could borrow Dickens’s wood desk […]

Charles Dickens’ 200th birthday is coming up soon and already, in England, they’re a bit sick of him and all the fuss, says Janine Pollock, head of the Rare Book Department at the Free Library of Philadelphia. But that didn’t stop a British museum curator from asking her if they could borrow Dickens’s wood desk for their own exhibit.

Though Pollock’s expertise is rare books, not literary criticism, she feels she’s come to know Dickens through their significant collection of his original letters. “He’s constantly generating excitement. What blows me away is how much in charge he was with everything…art direction, writing, social causes. He was a social butterfly…in love with the times he lived in. His letters are just as funny, just as well written as his books.” Indeed, “nothing was wasted” as little asides and observations in his letters to friends can be traced to characters that later appeared in his great works.

“A Year of Dickens At The Free Library”
Celebrating the bicentenary of his birth on February 7, 1812:

The Free Library’s strength is in its exceptional collection of original Dickens letters. The Morgan Library in New York City and the Victoria Albert Museum in London have more of his completed manuscripts.

One of Dickens’ desks is now owned by the Free Library of Philadelphia. The inset shows his initials, “CD,” carved into the lower right corner of the desk top. 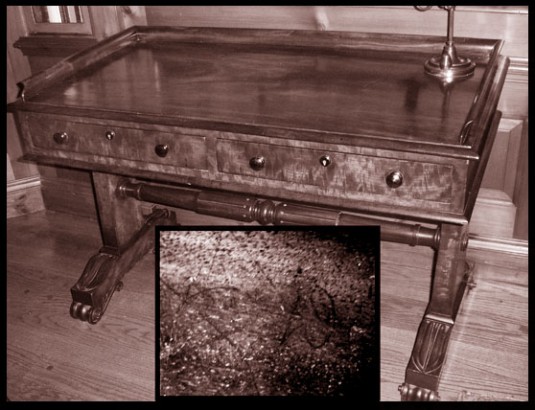 Rows of heavy, worn brass and glass display cases harbor precious artifacts of Dickens’s life and work. His marked-up manuscript proofs show him scratching out and revising text just prior to final publication. Indeed, he became a one-man publishing industry, sometimes reissuing the same book to keep his copyright active. “When he was halfway through the Pickwick Papers he started writing Oliver Twist, when he was halfway through Oliver Twist he started writing Nicholas Nickleby,” says Pollock in awe of his prodigious output. 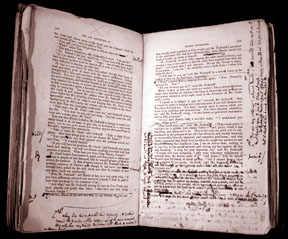 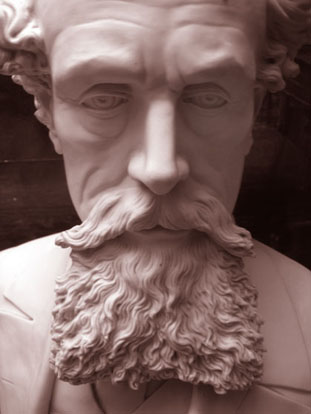 In addition to voluminous literature Charles Dickens produced a lot of children. Ten, actually. Though he became well off financially, he had a soft touch for the less fortunate, not only in his writing but in life. He once sponsored the publication of a book by a down-on-his-luck carpenter, John Overs, though not without first admonishing him to clean up his prose, a bit heavy on scantily clad women. 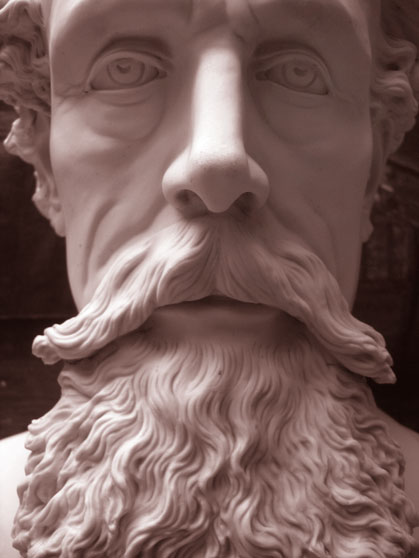 An actor, direct descendant of Dickens, recently visited the Free Library and posed for photographs at the desk Janine Pollock had, finally, decided not to ship across to England.

Imagine, the very walnut desk that witnessed the sight and sound of Charles Dickens, “The Inimitable” (as he liked to call himself) intently flitting his quill pen, scratching black ink across sheaves of hand-made paper. Perhaps, on this same warm, burnished surface, Dickens rested his elbows in concentration or idly carved his initials while germinating the classic Oliver Twist or A Christmas Carol. Fly this wooden antique at 32,000 feet in the air in a jet-powered, metal tube across the choppy depths of the Atlantic Ocean…or put it on a boat to ride hundred foot high rogue waves?

Uhmm, I think not. We’ll party like the Dickens right here in Philadelphia, thank you very much! 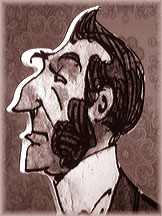 Joseph G. Brin is an architect, artist, and teacher based in Philadelphia. He is writing a graphic novel on Al Capone to be published on Kindle. He is also collaborating with Jordan Gil, exhibit designer, on a new project harnessing the power of art and strategic design for a bully-free Philadelphia called “B. Free.” (http://bfreephiladelphia.wordpress.com). Brin’s fine art rowing poster site is at: www.brushstrokesrowing.com/gallery