A criticism frequently heard at recent furniture expos, from Milan to New York, was the absence of real product innovation. The bad economy has something to do with this shortage: During the past few years many manufacturers have used restraint, showing few new products, trotting out previous years’ introductions. Still, there were a few surprises. […]

A criticism frequently heard at recent furniture expos, from Milan to New York, was the absence of real product innovation. The bad economy has something to do with this shortage: During the past few years many manufacturers have used restraint, showing few new products, trotting out previous years’ introductions.

Still, there were a few surprises. One of them was the first-ever presence of Minnesota-based 3M, sandwiched in between bathroom faucets and textile stands at ICFF in a shiny, large-scale booth that seemed to say little more than, “We’re here!”. A Midwestern approach to attention-grabbing?  At closer inspection I found one of the most interesting offerings, no larger than an iPad: a new way to light up a building using sunlight – sans skylights or photovoltaic transfer.

“Sunlight Delivery System,” 3M’s daylighting solution, uses one of the company’s noteworthy inventions, a highly reflective film, familiar to users of LCD screens and smart phones. This luminous film brings sunlight inside a building through galvanized steel ducts connected to a rooftop catchall. It’s this reflective ability – according to 3M, at more than 99% – that makes theirs a breakthrough product that promises to shake up the new construction industry, when it  becomes affordable. “It’s a natural connection to the outside world,” says Dan Franus, 3M’s marketing manager for architectural markets. “It gets you sunlight without a view.”

Here’s how it works. An oval-shaped collector on the roof tracks and captures the visible spectrum of sunlight using GPS. In other words, no matter where in the sky the sun is, the tracker will find and capture its strongest light. The tracker does this with just one entry point, reflecting sunlight inside a series of galvanized steel ducts lined with the reflective film. (Exact details of the film are proprietary, but Franus says it’s more reflective than the common bathroom mirror, which is about 96% reflective.) Competitors have gotten to that level too, but it’s that extra three percent 3M claims that makes this system possible. “With every bounce, light loses intensity. So the more reflective the surface, the less it loses on every bounce, and the farther it goes.

Sunlight travels through vertical and horizontal ducts that connect to light fixtures which can be recessed or hanging. If there’s not enough natural light to keep the fixtures powered at 100%, a sensor will trigger artificial light to make up the difference, just like your hybrid electric car. So when the sun is brightest, the need for artificial light will be lowest. (It’s planned that future models will use energy-saving LEDs).

3M claims this hybrid ability will substantially reduce energy costs given that lighting accounts for 45% of any building’s bottom line. And the potential for savings increases when you add in the fact that the system strips out heat-generating UV rays at the intake point, reflecting light that’s temperature-neutral.

Why isn’t this product everywhere? One reason is that it’s still in the beta phase. In fact, there isn’t really anywhere to go and see it demonstrated in the U.S., save for 3M’s own Innovation Center in St. Paul, Minnesota or at a KFC restaurant in Japan. (In testing the technology the restaurant hopes that by bringing in sunlight, they can induce customers to linger longer and purchase more food, if they feel they’re outdoors rather than under blue-toned fluorescents.) 3M says the system is better than devoting more square footage to overhead or exterior windows. Skylights can only illuminate the top floor or light up surfaces beneath them. Photovoltaics provide another option but the sunlight has to be converted to energy before it can power the lamps. 3M’s version doesn’t need to convert anything, it simply reflects – which sounds more efficient.

There’s also the intangible, emotional factor. During my visit to the Innovation Center last month, Franus stood under a prototype, a 15-ft., exposed light fixture connected to the network of ducts 45 ft.-deep. It made the whole room feel light and airy, just as if we were standing under a huge skylight. Franus explains that under the prototype, you’ll know when the sun is setting by the orange and red hues that beam out of the fixture. “The human factor’s a big part,” he notes. “It’s why everyone wants to be outdoors,” reasoning that our species’ wellness benefits from being in sunlight. Now that healthful, natural light can be brought to workers crammed into drab, windowless offices. I noticed that the room, which is located in the deep recesses of the innovation building, took on a feeling of being close to the outdoors. 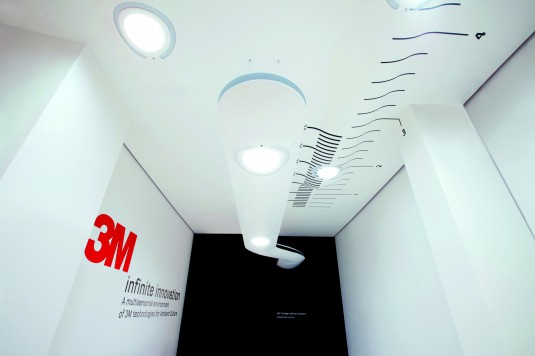 The feds are interested. The Department of Defense recently awarded 3M an emerging environmental technology grant. DOD will install and test the system at one of its facilities later this year. Designed primarily for use in new construction, the Sunlight Delivery System can also be used to retrofit buildings, with limitations, says Franus. If the technology delivers as it’s expected to, the cost to install it might be dwarfed by the long-term energy savings, especially if the U.S. Government makes good on its promise to overhaul its vast building stock. So sure that this will happen, 3M is talking green about rebates that might be available for companies that use the system to meet building code mandates and LEED certifications.

And, there’s national security. “If we can reduce our dependence on foreign oil, improve energy efficiency and bring it to a commercial concept, that’s one of the reasons we want to [bring it to market],” says Franus. “The government doesn’t see this as where we are now [with the technology], but where we are going.” 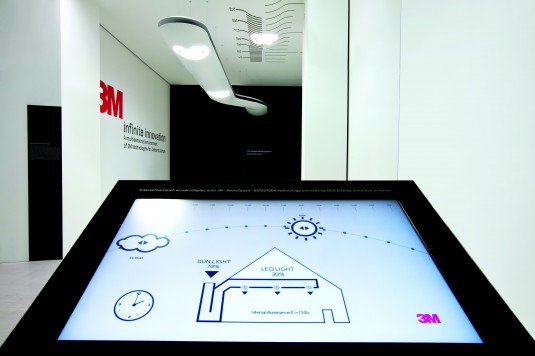 We’ll be watching to see how 3M will get the cost down to where the system is workable with the trades. The company is guarded about its production costs or the product’s eventual price. The prototype itself will go through some revisions: the sunlight ducts might be too large for retrofit projects, especially in space-challenged cities like New York. Early adapters, along with government endorsement seem to be part of the game plan. 3M’s recent splash at the international design shows won’t be the last we’ll hear of them.