The Adventure of a Straw-bale Building

Today as I was serving breakfast tacos I talked to a customer about Community Rebuilds. She is a regular at the saloon where I work. Her name is Lisa and she has big arm muscles, which she usually displays by cutting the sleeves off of her tee shirts. While making small talk about the weather, […]

Today as I was serving breakfast tacos I talked to a customer about Community Rebuilds. She is a regular at the saloon where I work. Her name is Lisa and she has big arm muscles, which she usually displays by cutting the sleeves off of her tee shirts. While making small talk about the weather, jobs, errands, we also chatted about where we’ve been and then Moab came up.

“What were you doing in Moab?” Lisa asked.

“Well, I worked at a goat creamery for six months and then a non-profit that builds straw bale houses for low-income families,” I answered. This kind of information is often followed by raised eyebrows and a drawn out “woooowww,” or a short, punctuated, “really.” Lisa gave me both. “So you know how to build straw bale houses now.” Not a question, a statement. Her eyes were wide with impressed approval.

“…Yyyeeeaaaaahh….sort of.” I said, nervously wiping a glass.

I’ve only recently crossed over into the itchy world of straw bale enthusiasm and have since found it nearly impossible to talk about it without using tons of comparisons. People wanna know: “Does it cost more, does it take longer, isn’t it more flammable, won’t it mold, can’t it only be one story, why do they all look like adobe huts, etc.” And my answers to these questions are kind of boring: “No, depends, no, depends, no, depends, etc.” Sometimes I try to jazz it up like: “Here’s the thing, it depends, or nuh uh.” When I’m waitressing, I’m constantly perfecting the art of tactful-conversation-pausing, as in: “Yeah, natural building, it’s totally awesome. Would you like a refill?”

The space between refills is both infinite and minute. From one iced tea to the next I’ve waited on three other tables, refilled condiment tubes, and gotten everyone another round at the bar but once I return to fill that cup yet again, it’s like I never left, the customer is picking up the conversation exactly where we left off. And there just isn’t enough time in those micro-conversations to explain, for example, that the houses won’t mold because natural builders and engineers have designed a cool little device, which measures the moisture content in the walls. Or, for another example, that a straw bale house is actually less flammable than a stick built house; you see when farmers bale up straw, the waste matter from the wheat harvest, it’s bound up so tightly that the oxygen content inside a bale is so extremely low that if you held a blow torch up to the bale, it would singe the outer fringes but leave the bale intact. I’ve heard stories of builders pulling all-nighters, tipping over a lantern in the wee morning hours and setting their new straw bale construction ablaze. By first light, all that remained standing were four walls of straw, the studs and joists were smoldering embers. 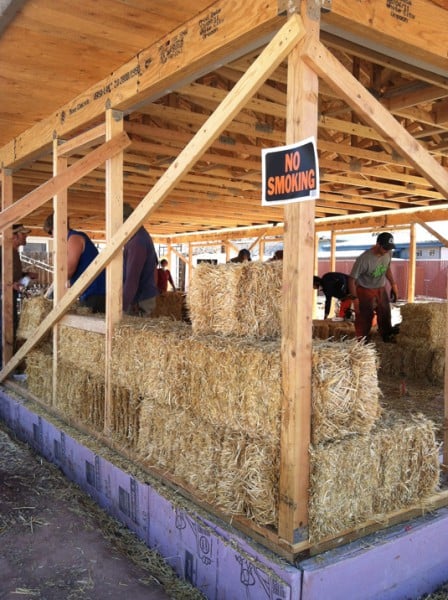 Since I can never really get into all of this, I resort to just talking about how my experience in Community Rebuilds felt [a nonprofit organization founded in Moab, Utah, which builds affordable housing in a tourist town and provides an educational opportunity to learn how to build with a sustainable, environmental conscience. The group is currently cranking out more straw bale homes in Moab, and has expanded to Durango, Colorado.] www.communityrebuilds.org.

And not like finger-feel but from-the-middle-of-your-heart-way-down-to-the-tips-of-your-toes feel. It’s quick and meaningful and I can be passionate and pour a beer at the same time. Today I told Lisa about how the straw bale house I built feels.

“Lisa, it’s like being in a big, safe, womb. You’re surrounded by earth from floor to ceiling, but it’s clean and warm. When you talk, the walls absorb your words like they’re listening…” and then her phone rang and she had to take it. 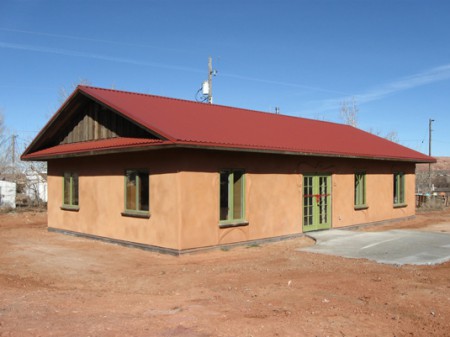 But I was on to something so I kept going in my own head:

A handful of mud plaster is the most delightful and strange combination of rough and smooth, scratchy and slimy, liquid and solid. To be able to take that handful and then smear it on a bale of straw requires your whole body, you have to put your hips and shoulders into it. The brute force it took to make a wall and the delicate touch to round a corner…I felt like a true craftswoman. And beyond the wonderfully dirty and elementally tangible building experience, there was the fibrous quality of the relationships and bonds formed in that semester. Our instructors kept preaching the importance of fibers’ and how they are the structure of our cob walls, the strength of our adobe floors, the durability of our smooth ceilings. 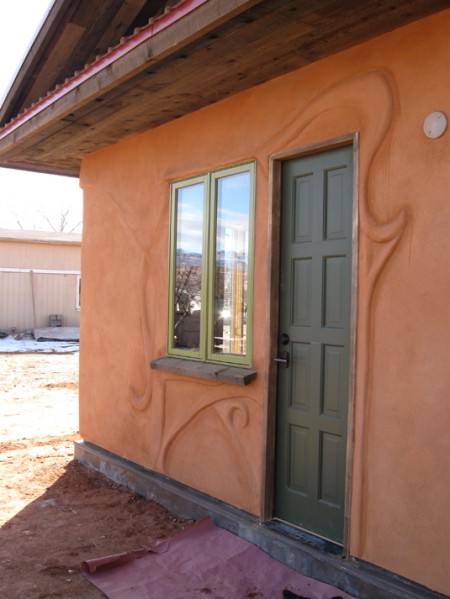 It became very clear that what was really keeping that house together was our trust for and reliance on each other. Giving wake up calls, making a big pot of coffee to share, filling up water bottles, pulling mud clumps out of each other’s hair, riding brooms around in circles like horses or coming up with inappropriate names for equipment just to make each other laugh. I can still see our teachers lacing their fingers together and all of us interns moaning and groaning the word ‘FIBERS,” for the millionth time. Those were times I remember feeling deeply happy; that was community. 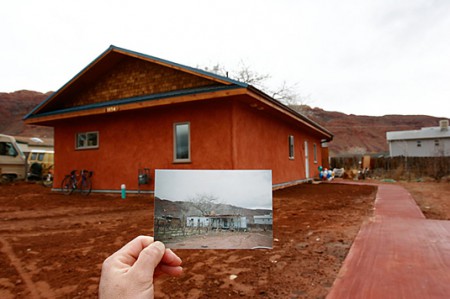 “Sorry, about that, Serah. Didn’t mean to interrupt you,” Lisa said and she took another Pico-smothered bite.

Lisa sauntered out of the saloon and while I bussed her spot at the bar my mind was still buzzing with memories of the fall of 2011 when I built my first straw bale house. One memory in particular…

It must have been 5 a.m. in the Community Rebuilds house when I heard Kelly Ray Mathews, on of our natural building instructors, rapping on our dorm room doors saying ‘time to get up.’ Still bleary-eyed I heard the faint, smooth sounds of Chuck Mangione’s “Feels So Good.” This was our wake up call, because this was a big day: THE DAY THE BALES ARRIVE. By 6 a.m. we were all on site setting up palettes and waiting for the 18-wheeler to come barreling around the corner with our building blocks. The sun arrived when the bales did and in that dim light, we turned ourselves into an assembly line adding a bale at a time to the growing stack just inside the property line. I can’t remember exactly how many bales there were but it felt like 3,000. Even through the gloves I got little blisters from the baling twine, but 10 people on a cool morning makes for quick work. In just a little over an hour, the semi was completely cleared off and our beautiful bales were stacked high in what looked like a straw fortress. Imagining the house I was about to build and looking over this fortress confirmed that no huffing and puffing in all the world could blow this new thing down. 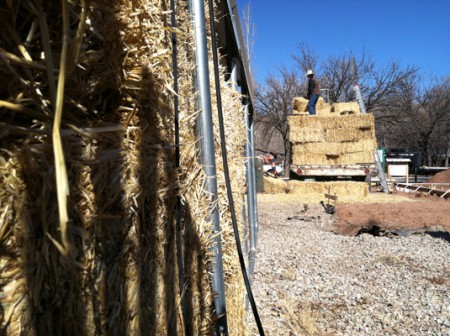 Serah Mead, an artist, builder, and writer worked as a student intern for Community Rebuilds in the fall 2011. She now lives at the Oregon Country Farm.